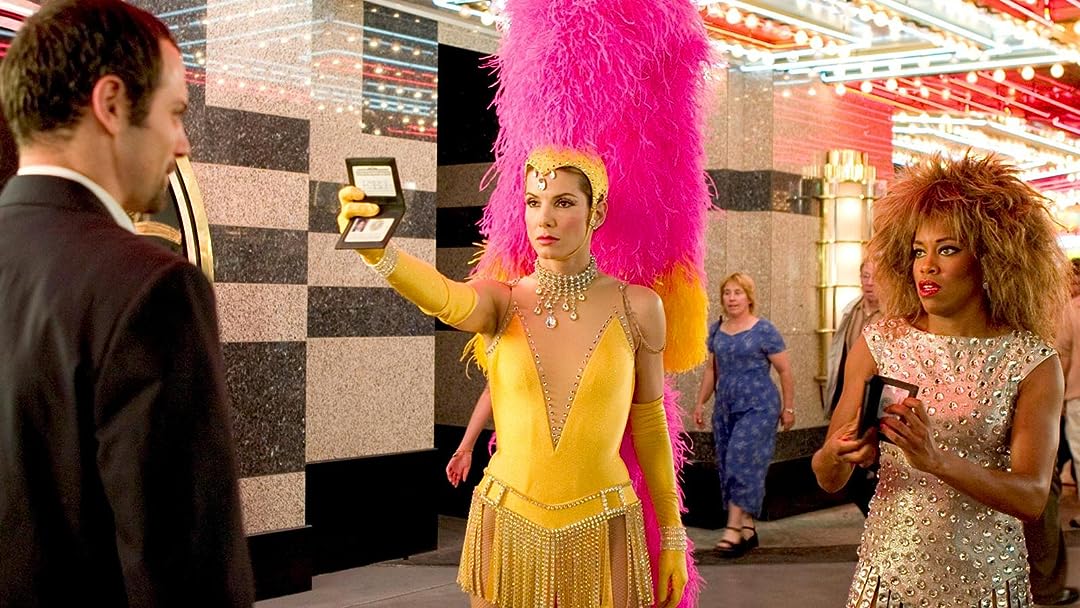 TheReaderReviewed in the United States on October 23, 2022
3.0 out of 5 stars
It's alright
Verified purchase
The first one is 5 stars and this one compare to first is 3. Mainly because the plot and scenes are a little boring and lacking bite.

SchtinkyReviewed in the United States on January 22, 2009
3.0 out of 5 stars
The sequel doesn't live up to the first movie
Verified purchase
It's been two weeks since FBI agent Gracie Hart (the fantastic Sandra Bullock) made news headlines for saving the Miss United States Pageant and winner Miss Rhode Island, Cheryl Frasier (Heather Burns), from being blown up by vengeful Pageant Director Kathy Morningside. She's on a bank stakeout to capture an organized group of bank robbers called The Housewives. But things go wrong when Gracie is recognized by an adoring fan, and the Housewives almost get away. Now considered too recognizable to be a field agent, her popularity jeopardizing herself and other agents, FBI Director MacDonald (Ernie Hudson) decides to make Gracie the "New face of the FBI", a publicity position. Agent Eric Matthews has broken up with her (they were together at the end of the first movie) so Gracie decides to take the position. She's introduced to effeminate Joel Meyers (Diedrich Bader - Office Space, The Beverly Hillbillies) who's going to do a total makeover on her, not just makeup and walking like Victor Melling did, but attitude and public appearance as well. (Diedrich Bader is fantastic in his role as Meyers)

Ten months later, Gracie is making television appearances on Regis's show, author of a book, and traveling everywhere on publicity tours to promote the FBI as a kinder, gentler organization. Assigned to be her body guard is new agent Sam Fuller (Regina King), a tough, angry, undisciplined agent who no one wants to work with. Sam doesn't take crap from anybody, and especially dislikes Gracie who is now the epitome of what she hates in women. When Miss United States Cheryl Frasier and Master Of Ceremonies Stan Fields are kidnapped and held for ransom in Las Vegas, MacDonald sends Gracie there to handle all the press conferences. But Cheryl is Gracie's friend, and Gracie can't just stand by the sidelines; she's an agent after all. So Gracie, against MacDonald's wishes, dives headfirst into the investigation, dragging Sam with her. She's determined to find her friends before the kidnapper kills them.

'Miss Congeniality 2: Armed And Fabulous' was a disappointment after the first movie. It's more stilted and seems to try too hard to be funny, whereas the humor in the first movie flowed naturally. The plot isn't as well written as the first movie either. Sandra Bullock still gives an amazing performance, but its wasted in this sequel. Although, the drag show near the end is pretty hilarious, even if it wasn't necessary to the plot. William Shatner doesn't look well in this movie, and his role wasn't nearly as cleverly written. The visit to Stan's mother at the nursing home was funny also.

Overall, this sequel was unfortunately a miss, which was disappointing to me. I liked the Gracie Hart character so well I would have watched a third movie, but Armed And Dangerous was such a flop that a third movie with the character will never happen. I'm giving the movie 3 stars simply for Sandra Bullock's performance, without her the movie would be 0 stars. Rent, don't buy. Enjoy!

apoemReviewed in the United States on May 16, 2013
4.0 out of 5 stars
My Daughter Loved It
Verified purchase
This movie seems to have garnered mixed reviews between professionals and Amazon Reviewers alike. That appears to be the case in our home as well.

The idea behind this movie is very cute. An agent for the FBI is very tomboyish and prefers to be able to go undercover. After spending some time undercover in a Miss America pageant she can no longer go undercover and actually has some star power. So her boss has given her the option to be the 'Face of the FBI'.

During the show she goes from being a tomboyish figure to being a classy lady that tours the talk shows. When her friend is kidnapped she decides she's had enough of the 'face of the FBI' job and begins searching for Gracie her friend.

I found this very trite and unimaginative. I would agree with the other reviewers who state that this movie seemed to be mostly about cashing in on the first movie a little bit longer.

However, my daughter has loved this show. She just recently was able to watch it using Amazon Prime and has completely and totally found it enjoyable. She has watched it several times. She likes that the main character goes from being Tomboyish to Girly and back to Tomboyish in the course of the movie. She thinks the main character is very pretty and classy. And I think she likes the idea of being an FBI agent.

Enjoy.
One person found this helpful

Heather D. CouillardReviewed in the United States on October 27, 2008
4.0 out of 5 stars
Funny and Fabulous
Verified purchase
Miss Congeniality 2 follows FBI agent Gracie Hart's ascent to media darling as the Bureau's new "Face of the FBI." Armed with a personal stylist and some high-end fashion, Gracie becomes less Secret Agent Hart and more Secret Agent Barbie. When her friend, Miss United States, gets kidnapped, Gracie struggles to maintain a balance between her new, glam persona and the down-to-earth, awkward-but-capable Gracie we came to know and love in the first film.

MC2 is decidedly less sweet than its predecessor, but also funnier. Sandra Bullock is a hoot in Gracie's made-over skin, and she plays off her supporting cast well. My favorite addition to the sequel was the ever-delicious Enrique Murciano as the young, gullible Secret Agent Jeff Foreman of the FBI's Vegas HQ. Murciano portrays Jeff with a genuine sweetness and great comedic skill. Plus -- he's gorgeous, and serves as the film's eye candy (albeit very talented eye candy).

I watched MC2 alone, and still found myself laughing out loud several times. In many ways, I enjoyed this more than MC1, and hope that everyone who liked the first film will give this one a chance. It's totally worth it.
5 people found this helpful

ClaramjReviewed in the United States on January 8, 2019
5.0 out of 5 stars
Even Better Than The First!
Verified purchase
I just watched the first one on here and went straight this one after, and I have to say though I love the first one, this one was even better!

It was more going on, and I liked the relationship with the two women better!

Not having some guy to be Sandra's love interest was much better, every movie doesn't have to have a love interest for the woman, especially when they are supposed to be the main character!

I did miss Michael Caine in it, but the new guy did good too, and was glad William Shatner was back in it!

It was once again a great fun movie to watch! I had seen the first one years ago, but had never seen this one, and it didn't disappoint!

I wish they had made more movies of this, with more of Regina King as Sandra's partner!
18 people found this helpful

Sophia SteinbergReviewed in the United States on October 22, 2021
5.0 out of 5 stars
Pls help didn’t mean to buy
Verified purchase
I thought I was buying the first movie. Your website won’t let me dispute the charge. Pls help

DianazonReviewed in the United States on May 2, 2021
5.0 out of 5 stars
Another great for Sandra Bullock
Verified purchase
Sandra Bullock is talented! I always want to see her movies. I loved her in the first of this title so expected more of the same and it delivered. Great and funny flick.

WordsmithReviewed in the United States on December 26, 2014
4.0 out of 5 stars
Sandra Bullock does it again: laugher is the best medicine, at least for me!
Verified purchase
Nothing earthshaking, but a decent, somewhat slapstick, comedy. I happen to enjoy Sandra Bullock's movies, and the added attraction of Regina King (who played in "Ray," as his "2nd wife" when he and his band were on tour) clinched it for me. Lots of laughs over the competition between Bullock and King and some sympathetic "girl talk" make for an interesting comedy. I could have watched this on my cable company's "on demand" feature, but I'd like to watch it more often so I bought the DVD. Takes me out of any bad mood after a lousy day so, for me, it's positive "bubble gum" for the mind. Worth seeing.
8 people found this helpful
See all reviews
Back to top
Get to Know Us
Make Money with Us
Amazon Payment Products
Let Us Help You
EnglishChoose a language for shopping. United StatesChoose a country/region for shopping.
© 1996-2022, Amazon.com, Inc. or its affiliates