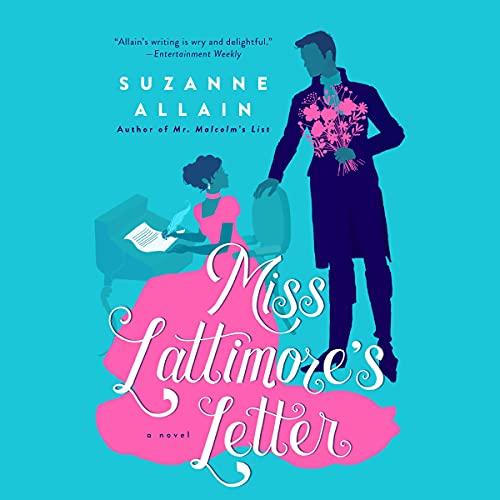 The woman who never made a match of her own is making matches for everyone else in this hilarious Regency-era comedy of manners.

Sophronia Lattimore had her romantic dreams destroyed years ago and is resigned to her role as chaperone for her cousin. Still, she cannot sit idly by when she becomes aware that a gentleman is about to propose to the wrong woman. She sends him an anonymous letter that is soon the talk of the town, particularly when her advice proves to be correct. Her identity is discovered and Sophie, formerly a wallflower, becomes sought after for her “expert” matchmaking skills.

One person who seeks her out is the eligible and attractive Sir Edmund Winslow. As Sophie assists Sir Edmund in his pursuit of a wife, she wishes she could recommend herself as his bride. However, she vows to remain uninvolved while aiding him in his search (especially since the gentleman surely does not return her affections).

But when her long-lost love and Sir Edmund both seem to be interested in courting her, Sophie can’t figure out if she’s headed for another broken heart­­ or for the altar. How can she be expected to help other people sort out their romantic lives when her own is such a disaster?

Your audiobook is waiting!
Learn more about membership
List Price: $21.00
You Save: $2.62 (12%)
By completing your purchase, you agree to Audible’s Conditions Of Use
Sold and delivered by Audible, an Amazon company

Amazon Customer
5.0 out of 5 stars Refreshing take on romance with ALL the Austen vibes
Reviewed in the United States on August 11, 2021
First, I read this in one go and LOVED IT.Second, if you love Jane Austen, you’ll love this.Third, I’m rooting for a movie adaptation please. I’ll even take a TV special. If not, I’ll go rewatch all of Austen’s.The characters, wit, love and HEA were perfect. MISS LATTIMORE’S LETTER is a light twist of Jane Austen’s classics: Pride & Prejudice and Emma kept coming to mind. (However, they are my favorites so) The writing style is a contemporary twist on Austen’s writing.I highly recommend if you like a full cast of characters with full personalities and a lot of love.Side note: the narrators can be confusing. It tended to switch from paragraph to paragraph. But still flowed well!!Miss Sophronia Lattimore is a spinster, destined to watch her younger cousin thrive society. When she encounters a couples secret conversation, she decides love must prevail. Writing an anonymous letter, Sophie changes the course of not only her life, but everyone’s around her. Maybe she isn’t destined for spinsterhood after all.Steam: very light & closed-door
Images in this review

SheaAndCompany
5.0 out of 5 stars Side effect of Reading this Book
Reviewed in the United States on September 25, 2021
Verified Purchase
Miss Lattimore’s Letter was a lovely read that I thoroughly enjoyed. On its own merits, this book had all the requisite things: fashionable society, strict social rules, balls & dances, vicious gossip, humorous miscommunication, a titled idiot, and that always needed--happily ever after. But, in addition to that, an interesting side effect of reading this book was that it evoked memories of several Jane Austen characters. The book brought to mind these questions: What happened to Willoughby of Sense & Sensibility ten years later? What if the matchmaker Emma was not wealthy and tried her hand at matchmaking anonymously, via letter? Could another heroine, like Persuasion’s Anne Elliot, find true love at an ‘advanced age’? Read this book. You will enjoy it and you might find yourself wanting to re-read a Jane Austen novel too. Isn’t that what a great read is all about, spurring you to read more? ❤️ 📚 🥰
Read more
2 people found this helpful
Helpful
Report abuse

Jodi Guerrero
5.0 out of 5 stars a fun read
Reviewed in the United States on August 5, 2022
Verified Purchase
Clever and lively characters—enjoyable Austen-Esque book. Worth the read. I couldn’t put it down. Great period details made it special
Read more
One person found this helpful
Helpful
Report abuse

Srsly
5.0 out of 5 stars Just what I needed
Reviewed in the United States on December 12, 2021
Verified Purchase
An enchanting period romance with low angst.
Read more
One person found this helpful
Helpful
Report abuse

Jeannette G Walker
5.0 out of 5 stars A quick read and highly entertaining
Reviewed in the United States on July 30, 2022
Verified Purchase
I loved the stories set in this time period.
Read more
One person found this helpful
Helpful
Report abuse

Megan Taylor
5.0 out of 5 stars Couldn't put it down!
Reviewed in the United States on August 14, 2021
Verified Purchase
I felt like I was at the dances watching the action happen right in front of me. Its such a lively time period to be immersed in and the characters were easy to consider as friends. Loved every minute of it!
Read more
One person found this helpful
Helpful
Report abuse

Kelsy
4.0 out of 5 stars Heyer fan favorite
Reviewed in the United States on October 11, 2021
Verified Purchase
I’ve seen some reviews suggest this series for anyone who is a Jane Austen lover, but that isn’t quite accurate. If you are a Regency Romance lover and a Georgette Heyer fan, then these books will be right up your alley. I picked this up hoping the tone and dialogue exchanges would be reminiscent of Austen. Instead, I got cheeky characters and social foibles reminiscent of Heyer. It’s commendable writing, but it took a switch in expectations to enjoy it.

While there is a distinct influence of other works in this genre, Suzanne Allain definitely has her unique style that pulls a reader in and creates a fun escape with likable characters.

Deborah B.
5.0 out of 5 stars Super entertaining, witty and clean…
Reviewed in the United States on December 31, 2021
Verified Purchase
Loved it
Read more
One person found this helpful
Helpful
Report abuse
See all reviews

little bookworm
3.0 out of 5 stars Light regency romance
Reviewed in the United Kingdom on September 18, 2021
Verified Purchase
At the age of twenty eight, Sophie Lattimore is resigned to her fate as a spinster. She is lucky that she has a place in her aunt's household, acting as her cousin Cecilia's chaperone. Still when Sophie acts upon some information she is chance to come across and sends an anonymous letter to a gentleman who is about to propose to the wrong woman, Sophie suddenly finds herself coming to the forefront of attention, garnering a reputation for herself as Lady Cupid. Soon others are coming to enlist her help, including the handsome Sir Edmund Winslow, who is eager to find a wife. The only issue with this is that Sophie rather takes a liking to Sir Edmund herself, still she does not expect such feelings to be returned and so sets store to do her best for him. Soon enough however, Sophie has reason to rather regret her previous match-making, and when an old suitor of her own turns up, certainly she finds herself struggling to manage her own romantic life.

My second book from Suzanne Allain, Miss Lattimore's Letter was very much in the same vein as her previous, Mr Malcolm's List, in that it was a light and easy Regency romance and comedy of manners. The story starts off in London, but soon moves to Bath, and follows the romantic entanglements of several couples.

I liked Sophie as the main character, she made for a slightly older heroine than the standard for Regency romances, and I liked her story of a second chance at love. I did at first rather wonder at how she could seriously be contemplating accepting the man who had previously broken her heart, however, I think Allain managed to convey the predicament that Sophie was in, the choice between marriage and all that it offered including a family and spinsterhood. Still, out of her two suitors I much preferred Sir Edmund, who was sweet and gentlemanly and seemed to genuinely appreciate Sophie. That being said, their path to happiness was at times rather a frustrating one, and at times I did find it hard to understand Sir Edmund, and why he seemed so reticent in his courtship of her. However, all was revealed in the end, and again I could appreciate his reasoning.

Some reviewers have commented that the story seemed a bit of a mash-up of Austen novels, and certainly I could see the nod to Emma perhaps, who had a penchant for match-making herself, and also to Persuasion, where the heroine Anne Elliot is a more mature character who has previously missed out on her chance at happiness. That being said Sophie was very much her own character.

As said before, the story very much followed the romantic exploits of multiple couples, including Sophie's cousin Cecilia, who at times was rather selfish in her thinking but ultimately still a likable character, and the Beswicks, newly married thanks to Sophie's intervention, but who are not finding their married life all that plain sailing. Allain managed to juggle these various sub-plots relatively well, with a colourful cast. The story did rely on rather a lot of misunderstandings and such, all of which were eventually neatly resolved, and I did also feel that having so many sub-plots did detract a little from the central romance itself.

I did like the family dynamics in the story, as whilst Sophie's aunt has previously merely done her duty by her, she comes to appreciate Sophie and is rather sweet towards her by the end. As with Mr Malcolm's List, the overall tone here is very light and at times some of the goings-on can seem a trifle silly, but once again it seems that is very much the intention, this being a comedy of manners.

Overall, I once again enjoyed this offering from Allain as a fun and easy read, however, as before, I don't think her style will be for everyone, and this was too light a read to be emotionally satisfying for me personally. I've given it a 3 stars, but likely it is more of a 2.5 stars.
Read more
2 people found this helpful
Report abuse

wilma todd
2.0 out of 5 stars I found this book slow in action. Like a person would dumb it down.
Reviewed in Canada on November 2, 2021
Verified Purchase
Did not like book at all. I thought from the blurb it would be more interesting than it was. Characters were wooden. Book read as if an outline for book was made and book conformed to outline.
Read more
One person found this helpful
Report abuse