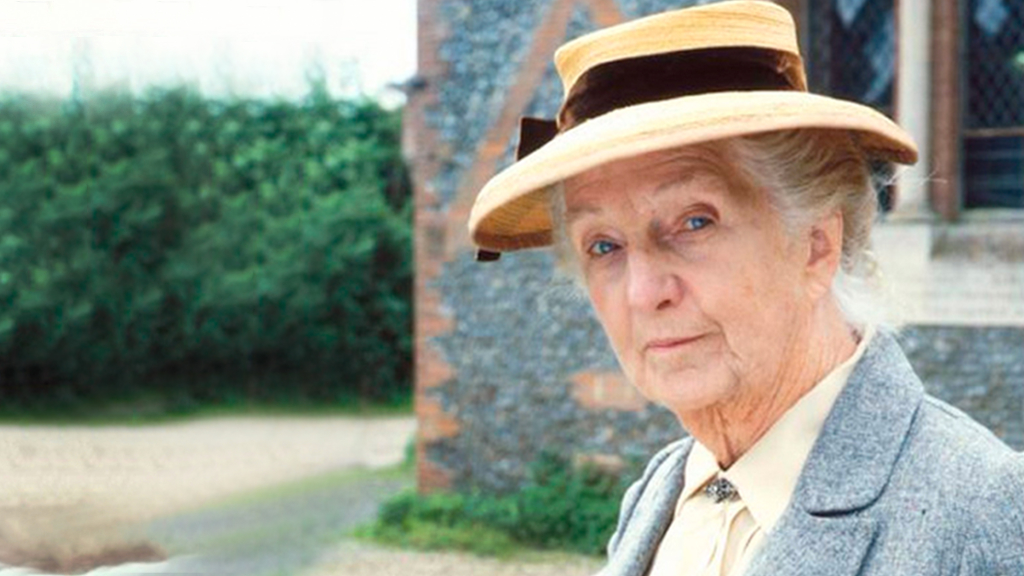 (47)
7.81985X-RayTV-PG
Gloriously remastered from 16mm film, see this series like never before. Who is the strangled woman in Gossington Hall? Fortunately for the Bantrys, Miss Marple is their neighbour.

CindyReviewed in the United States on December 23, 2017
5.0 out of 5 stars
THE BEST-SUCH A FAN
Verified purchase
Joan Hickson is the real deal. What a series. So much enjoyment..
26 people found this helpful

King of HeartsReviewed in the United States on May 11, 2021
5.0 out of 5 stars
Excellent
Verified purchase
Agatha Christie actually met Joan Hickson and told her that she hoped Hickson would play character. Hickson received the OBE (Order of the British Empire) from QE II for her acting work. She portrays the elderly spinster to perfection.
One person found this helpful

Amazon CustomerReviewed in the United States on February 8, 2017
5.0 out of 5 stars
no star
Verified purchase
this is crap...ordered but didn't open...now open and find this is in FRENCH. ...Sorry, don't speak french and now it seems can't return ??...

Devnet Anastasia VigdisReviewed in the United States on September 4, 2017
5.0 out of 5 stars
The REAL "Miss Marple" Is Back On The Case!
Oh, how I and my mystery-adoring friends have missed "the real Miss Marple"! I know the show was made a very long time ago --- I was but two. I was shown many episodes with their VCR in my early teens. It wasn't my usual kind of thing, my being a Goth and that.

However, I can see that my elder friends and family are right.

The depth of character, the nuance of plot, the dignity and unimpeachable poise of Miss Marple herself, character and performer --- they absolutely outdo any of the new "modern adaptations," which I loathe because they turn the whole thing into a farce laden with deliberate anachronisms. WHERE THIS SERIES DOES NOT. It leaves it a tribute to Agatha Christie, as it ought to be. She'd turn over in her grave if she saw the others! She wrote mysteries, not sordid comedy.

My elder friend had these on VHS and of course that meant that we had not the means to view them, but she told me she thought I'd love to see them after so long, and I do.

I want to watch more. I am essentially seeing them for the first time because now I view with the eyes of an adult; things my elder friends remember are new to me. And we allow no Spoilers!

One single complaint: the soundtrack of background music can get to be annoying and is at times too upbeat for the incidents being depicted. But I'm told that improves in later seasons and in any case it's a tiny flaw in such viewable perfection.

PiReviewed in the United States on August 19, 2017
4.0 out of 5 stars
Why loud background music?
Verified purchase
The background music should be discontinued but it plays throughout the series.....getting louder as a scene intensifies.....truly annoying.
The theme song plays throughout as well taking away from the excellent acting and language.
I am hopeful that Season 2 will have fixed this problem.
19 people found this helpful

Kass McGannReviewed in the United States on July 22, 2018
4.0 out of 5 stars
Shows true to the originals books. Women's costuming appallingly circa 1980s.
I have been an Agatha Christie fan since my early teenage years, and I remember these episodes when they first aired on PBS. They are extremely faithful to the original stories (unlike the more recent Marple series which, while fun, takes grievous liberties that sometimes spoil the plot). And Joan Hickson is undoubtedly THE quintessential Miss Marple (Dame Agatha said so herself!).

But I have only given this series four stars. Why? Because the women's clothing and hairstyles are appalling. They are not 1950s at all. This series was filmed in 1984-85 and the women's clothing and hairstyles are from the early 80s. I swear I wore some of the same skirts and sweaters in junior high school! In "The Moving Finger", the "Pygmalion" girl gets a "Lady Diana" haircut (except that it looks like it was cut with a dull kitchen knife). And most of the non-elderly women simply wear their hair in combs on either side of the head, a hugely popular style in the early to mid-80s, not the mid-1950s when the series is set.

This may be a minor point to most people, but I make my living as a costume historian. Four years after this series, Clive Exton would produce the acclaimed Poirot series starring David Suchet and the clothes, the hair, the people in the distant background would be so perfect that one could almost imagine they were filmed in the 1930s. So this quintessentially faithful dramatization of the Miss Marple stories disappoints me because it gets so close, and then ruins the visuals with 80s hair.
32 people found this helpful

Jeff DiegoReviewed in the United States on January 18, 2021
5.0 out of 5 stars
Joan Hickson towers as Miss Marple
As others here have said, don't even bother with the contrived and artificial more recent versions of Miss Marple. Joan Hickson was born to play her, and Agatha Christie would've been thrilled. Every element of these productions is understated and classy. As for "intrusive music" bothering a few reviewers here, I don't even know what they are taking about. I've seen all the episodes multiple times and never thought any music was intrusive or irritating - quite the opposite - but everyone has different tastes. Another reviewer complained that the clothes and hairstyles didn't "look 50's" - not true in my opinion, and I know - although occasionally some of the women have pretty obvious wigs. Season Two is outstanding also. You won't regret purchasing this.
3 people found this helpful

Mahatma HeadReviewed in the United States on April 18, 2018
5.0 out of 5 stars
This is the Real Deal
I am so happy to find these available again. These are the perfect adaptations of Christie's novels. Joan Hickson IS Miss Marple, with the wit, intelligence, and good sense that character was supposed to have. I have read the books and watched all of these, and am joyfully setting out to watch them all again.
17 people found this helpful
See all reviews
Back to top
Get to Know Us
Make Money with Us
Amazon Payment Products
Let Us Help You
EnglishChoose a language for shopping. United StatesChoose a country/region for shopping.
© 1996-2021, Amazon.com, Inc. or its affiliates