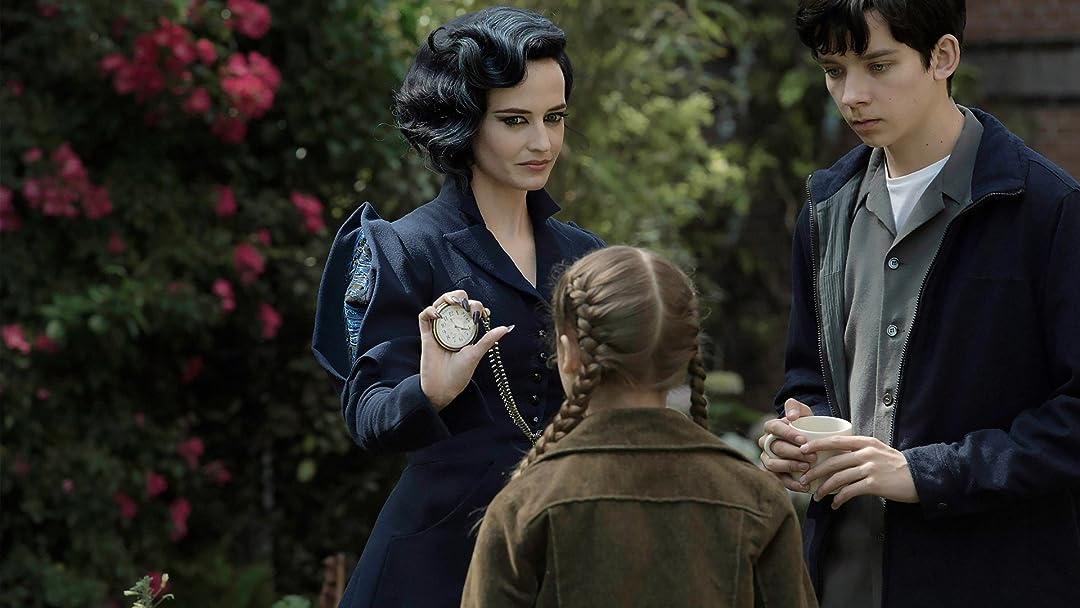 m.m.harrisReviewed in the United States on July 31, 2018
1.0 out of 5 stars
NOT WORTH WATCHING
Verified purchase
I love Tim Burton's movies and I loved the Miss Peregrine book series, and so I thought this was going to be a GREAT combination! Unfortunately, the plot did not translate to screen in a fluidly and the pacing was lumbering and awkward. Asa Butterfield was not well cast in this role, being that he seemed like a grown up in a children's tale and his character came across as wooden and stilted. There was less than zero on screen chemistry in the love interest aspect. Changing Emma's peculiarity to Olive's due to concerns that kids watching the film might turn into pyromaniacs was really disappointing due to the inherent fiery passion behind Emma's character, which fell flat and petulantly to the floor. I could have seen this series going on to be the next Harry Potter series, but there's really no fixing this without it being totally re-conceptualized and refilmed. Miss Peregrine's actor was excellent and ALMOST carried the film, but the script was just SO BAD that it was beyond resuscitation. It makes me sad because I've always idolized Tim Burton's ability to craft the esoteric into a beautifully meloncholic fantasy, but its been a while since that magic really came across on the screen. I hope he finds himself again, because this was hard to watch.
54 people found this helpful

Josh ShehaReviewed in the United States on January 28, 2017
5.0 out of 5 stars
Yet Another Masterpiece By Tim Burton
Verified purchase
Tim Burton has done it yet again.

Having been a devout Tim Burton fan for several years now, I had planned to see this movie when it came out in theaters but unfortunately I never found the time to do that. So, when my Blu-Ray copy arrived in the mail I put it on right away. I was so captivated by this film that I watched it again a second time the following day. This is something that rarely happens for me.

I would especially like to make note of a fantastic performance by Samuel L. Jackson as Barron. Anybody who has seen his previous films know that he's a very gifted actor. The performance in this film is definitely a great representation of his talent.

Terrace Stamp..need I say more...? His presence in this film makes it all the more special. He does a commendable job of portraying Abe Portman.

Eva Green also presents a wonderful performance as Miss. Peregrine. It's just as good, if not better, than her acting in Dark Shadows.

I highly recommend this film. Although it might seem a little frightening at times to smaller children, it should be a great family film.

Mike Billington author of Murder in the Rainy SeasonReviewed in the United States on February 21, 2017
4.0 out of 5 stars
A weird story with an all-star cast
Verified purchase
How weird is too weird?
That's the question that kept rolling through my mind as I watched "Miss Peregrine's Home for Peculiar Children" unfold. There are monsters, people with unusual powers - including a young woman who is lighter than air and must wear lead boots to stay grounded - and disaffected parents who can't figure out just what's going on with their son. Miss Peregrine can stop time, there's a "loop" in time where the peculiar children can live safely (more or less) and... well, suffice it to say that there are a lot of strange goings-on in this Tim Burton film based on the best-selling story.
The plot revolves around the stories told to a young boy by his grandfather: Strange stories of peculiar children, evil monsters (that eat children's eyeballs) and female guardians that can turn into birds when the occasion calls for it. The boy's parents dismiss the old man's stories as just that - stories. It turns out, however, that they are true, as the boy - now a teen - finds himself transported in time - or maybe to another dimension - back to a certain day in 1943. What follows are some epic battles with monsters and a love story.
The movie features an all-star cast including Eva Green, Terence Stamp, Samuel L. Jackson, and Chris O'Dowd with Asa Butterfield as the teenager who just might be able to save the peculiar children. The special effects are - as you'd expect with a Tim Burton film - very well done as is the cinematography and costuming. The narrative, in my opinion, wanders a bit but I'm willing to admit my sense that it does is the result of the fact that - because I am not familiar with the story - I might have gotten lost here and there.
The verdict: A visual treat with some almost too-weird action sequences that will likely appeal to younger audiences more than to their parents.
26 people found this helpful

C. A. LusterReviewed in the United States on September 8, 2017
5.0 out of 5 stars
Miss Peregrine's Home for Peculiar Childr
Verified purchase
This is not a review of the book. I may read the book after, but then I may become snooty and review the movie badly as most book reviewers that like to trash movies for not being exactly like the book. As for this movie, I love it. I find it fascinating the way we are carried from a fairly normal life during WWII in England to a wonderful adventure in a sometimes fantastic, sometimes scary world. Tim Burton once again does a brilliant job directing the strange for us with characters that make us care about them. Fans of movies like [[ASIN:B00KBCN0RW Lemony Snicket's A Series of Unfortunate Events [Blu-ray]]] should definitely see it. Please ignore the negative book reviews of the movie and see it. I don't think you will be disappointed.
17 people found this helpful

Kam LabyrinthReviewed in the United States on April 30, 2020
2.0 out of 5 stars
At least now I know
Verified purchase
I'd wondered why such a successful, and much loved, book series would yield a movie that failed badly enough to scrap hopes of a whole Potteresque franchise. Then I rented this, and found out why. The cast, and crew were fine. The butchering of the story (plot, characters, and narrative) reminded me of the meme stating that every movie based on a book (or game) should have a "book slapper" on the crew; whose sole job is to read the source material, and every time the script writers, or director starts to veer off source, the "book slapper" slaps them with the book. This movie, really could have used a book slapper.
6 people found this helpful

DannyReviewed in the United States on May 12, 2020
1.0 out of 5 stars
not worth watching
Verified purchase
I was really excited to watch this movie because I loved the book series. I was so disappointed because they changed almost all the characters ages and peculiarities for no reason. Emma and Olive's peculiarities switched, and Olive and Fiona's ages switched, along with many others. Millard is one of my favorite characters in the books, but they made him like 10 years old and he probably said 3 words in the whole movie. Also, none of them act the same as they do in the book, which is true for a lot of movies based on books, but this one especially. They also changed the whole story line so that they could end without a cliffhanger, but none of it lined up with the books and it seemed very childish. To me, it seemed like they read the back of the book without reading the whole book and made a movie about it.
3 people found this helpful

Frank RomanReviewed in the United States on July 14, 2022
4.0 out of 5 stars
Brilliant
Verified purchase
Impecable performances and up to par cinamatography plus the use of computer generated scenery, please note i am re-viewing it in 2022 therefore the film is a few years old, technology maybe has made changes, however the performances are impecable and I never ever for a minute expect any book made into a film to be identical...it cannot really because the imagination is grandiose even for technology. I do recomend it as a good film, one of it's own genre, one made in Mr. Burtons mind...some of the children are heartbraking in their different ability and their vulnerability they are minus a few differences the same as special humans and their secret world....

A customerReviewed in the United States on March 8, 2020
3.0 out of 5 stars
Almost like two movies in one - one good, one bad (Spoilerless review)
Verified purchase
The first 2/3 of this movie was typical Tim Burton type fair, above average and for the most part entertaining. A little dark for some kids, and Samuel Jackson's character was a bit of a phone in (he acted and sounded like many other roles he has done before). Still pretty good though.

The last 1/3? Boy, bad. It was almost as if he turned the ending of the movie over to interns or something. This is a spoilerless review, so without giving details away the ending came across like he lost interest in the film and just said "let's wrap this thing up". A shame because the first 2/3 really was worth renting.

If you are a Burton completist you may want to watch this, but the disappointing ending seems even more so because it ruined what had been a decent effort. Some creative moments, and a pretty film to look. 3 1/2 stars.
One person found this helpful
See all reviews
Back to top
Get to Know Us
Make Money with Us
Amazon Payment Products
Let Us Help You
EnglishChoose a language for shopping. United StatesChoose a country/region for shopping.
© 1996-2022, Amazon.com, Inc. or its affiliates