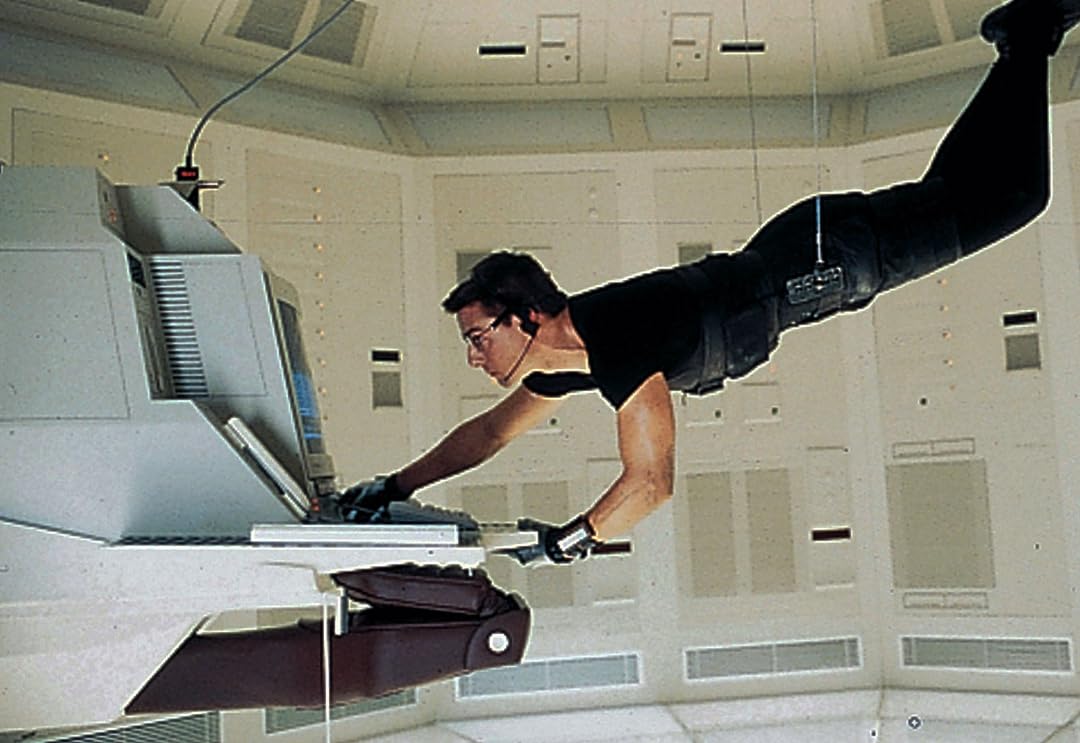 (5,937)IMDb 7.21 h 50 min1996X-RayPG-13
Ethan Hunt, a secret agent, is framed for the deaths of his espionage team and attempts to flee government assassins after him. He races against the clock in order to discover the truth.

Save with with the Mission Impossible movie collection on Prime Video shop now.

4.5 out of 5 stars
4.5 out of 5
5,937 global ratings
How are ratings calculated?
To calculate the overall star rating and percentage breakdown by star, we don’t use a simple average. Instead, our system considers things like how recent a review is and if the reviewer bought the item on Amazon. It also analyzes reviews to verify trustworthiness.
Top reviews

joel wing
TOP 500 REVIEWER
4.0 out of 5 stars Started an entire movie franchise
Reviewed in the United States on May 8, 2020
Verified Purchase
1996’s Mission Impossible created a franchise starring Tom Cruise as agent Ethan Hunt. The film was directed by Brian De Palma. Many of the elements would be used again and again. The one drawback was the plot was a little overcomplicated due to the fact that production started before one even existed, but it was still a great thrill ride.

If you read the background to the film you’ll find out that writing the movie was a mess. Several different writers were brought in and out and there were constant re-writes. De Palma ended up creating the action sequences and building the story around them. That explains a lot.

The story revolves around the CIA’s agent list being stolen and Hawk running around the world trying to get it back. To show how chaotic the story was the list turns out to be a fake and Hunt goes and steals the real one from CIA headquarters to sell to an arms dealer known as Max. Then someone on his team tries to steal the list. All the while there are people betraying Hunt as well.

What really drove the movie however was the action and the special effects. Many of these would become mainstays of the series. In the first scene for instance, Hunt wears a plastic mask to impersonate someone which would be used in almost every movie afterward. Probably the most famous scene is when Hunt breaks into the CIA to steal the list and is suspended by a line from the ceiling into a sealed room. He almost gets dropped on the floor setting off the alarms.

Overall this was an exciting movie.
C

Bardamu
1.0 out of 5 stars terrible writing
Reviewed in the United States on June 24, 2019
Verified Purchase
I stopped watching after about 15 minutes or so, so I can't speak to the movie as a whole, but what I saw was bad. Just a lot of blatant exposition. Saying things that characters would never realistically say because the audience needs information and the writers can't come up with a subtle way to communicate it. And let's have a little 5 second scene where the team teases each other and laughs together, because that's supposed to make us care when they are killed, even though we just met these people, and there has been no actual character development, and no opportunity for the audience to connect. And then just bonehead stuff: we want to use military time, because we think that sounds like spy talk, but we're also worried that the audience won't understand military time, so we're gonna have the character say the same time, twice in a row, " 0-400 hours. 4am" -- it's little bs stuff like that that makes the dialogue unrealistic and the characters seem fake.
Read more
5 people found this helpful
Helpful
Report abuse

Lektro
5.0 out of 5 stars Improved classic.
Reviewed in the United States on October 28, 2020
Verified Purchase
Not a bad purchase at all. Comes with 4K disc and 1080p blu ray. The added slip cover is always a nice bonus. Great transfer, full native 4K quality shot on film, some effort was exerted to make sure that the movie looks better than it ever has, with major improvements to detail and sharpness. HDR color enhancement makes for more engaging and vivid scenery. This movie was excellent in vhs quality, so seeing it in high resolution is a new experience. I just wish it was fully or partially shot in 1.85:1 aspect ratio, like those scenes in fallout that fans loved. All in all, it’s worth the price to own this piece of movie history.
Read more

5.0 out of 5 stars Improved classic.
By Lektro on October 28, 2020
Not a bad purchase at all. Comes with 4K disc and 1080p blu ray. The added slip cover is always a nice bonus. Great transfer, full native 4K quality shot on film, some effort was exerted to make sure that the movie looks better than it ever has, with major improvements to detail and sharpness. HDR color enhancement makes for more engaging and vivid scenery. This movie was excellent in vhs quality, so seeing it in high resolution is a new experience. I just wish it was fully or partially shot in 1.85:1 aspect ratio, like those scenes in fallout that fans loved. All in all, it’s worth the price to own this piece of movie history.
Images in this review

Snow Coot
1.0 out of 5 stars I Felt I had To Watch This Impossible Film
Reviewed in the United States on June 26, 2019
Verified Purchase
This offering is said to have grossed over $750,000,000. So for future reference I watched the whole thing to see why.
Honestly I still don't know why. It was too slick and impossible. I mean, for some reason there were no CCTV cameras in the sacred vault. I don't know if anyone who watched this film has ever lowered a man carefully, slowly while holding a 1/2 inch rope tether line~ I have. If help hadn't arrived I would have unable to hold on for more than a few seconds.
As far as the helicopter in the tunnel, well that was stupidly ridiculous. The whole plot was so riddled with impossible situations, and everything that happened went so smoothly. This is one bad flick.

Alex
5.0 out of 5 stars Bing Rhames
Reviewed in the United States on October 17, 2020
Verified Purchase
One of the best movies ever made? I think yes. Sure Tom Cruise has weird teeth and may be a Scientologist- get over it. Dude slays his roles (I will say they are hand picked for him just like Tom Hanks’ roles are [who I will say is a national treasure but get over it dude you were given slam dunks, way to nail those super sweet layups] but, Tom cruise legit earns it). My guy tried to become a fighter pilot to make the new Top Gun that much cooler- like. And they’re letting him fly not so fast planes for the movie, or so I’ve read. Point being, Tom Hanks could have actually gotten stranded to embody a role. Tom Hanks could have gotten shot in the ass and really knew what it means to go shrimpin’. He didn’t though. You know who did put the fear in Oprah? Tom Cruise. You know who exposed Jon Voight’s elaborate plan as the first action hero to wear a believable mask in an action film? Not that other Tom, I’m talkin Tom t boi car crushin Cruise aka Tommy Gunz. Sure, Tom Hanks did that movie with Maaaatttt Daymun but who wasn’t in that movie fr. And they just kill my boy Vin Diesel like Caparzo never got to tell his story- how, Sway? Like sure if it was the other bald Transporter dude that likes them Far East jawnz- Jason Stathams- ok sure, he looks like he could die poetically. But he never. dies. in. his. movies. Dawg fell like from the stratosphere in Crank and they were like you know what, this is bool. We need 2. Whatever, if you don’t like the first Mission Impossible you’re a liar or some uncultured swine. Shout out to Henry Cavil for being a straight bitch in that new one. Wah helicopter juice is hot and you let the ONE DUDE, THE ONLY GUY beat you/ after making him the mark? Like I hope the paid your ass Superman. I do hang with Tom Hanks though, I don’t want him to think it’s about him- I’m sorry if you got diddled by Epstein or it went the other way you were like the success story of that Home Alone yungin. Yes McCauley, I know who you is. Tell ya mans Igby doesnt just go down. And I’m out
Read more
Helpful
Report abuse
See all reviews

Lokii
4.0 out of 5 stars Improbably Good....
Reviewed in the United Kingdom on March 16, 2018
Verified Purchase
Mission impossible, the first of I think six. I may have lost count now. Great score, cinematography and action. Tom Cruise Rocks as does the rest of the cast. Shouldn't be missed. I will let you make up your own min.....
Read more
Report abuse

IwannaSellStuff
5.0 out of 5 stars Classic, and the best of the franchise
Reviewed in the United Kingdom on February 10, 2013
Verified Purchase
This is the very best of all 4 Mission Impossible films! If you are reading this and have not seen this first film, it's a must.

Emphasis is on story line as much as action. Mi2 and 3 were just action for the sake of it, all geared around (trying) to make Tom Cruise look good.

I'd recommend this to anyone, it's a lot of fun and has a fantastic story line.
Read more
One person found this helpful
Report abuse

Amazon Customer
5.0 out of 5 stars Nice
Reviewed in the United Kingdom on July 1, 2020
Verified Purchase
Like these films
Read more
Report abuse

17 people found this helpful
Report abuse
Translate review to English
See all reviews
Back to top
Get to Know Us
Make Money with Us
Amazon Payment Products
Let Us Help You
EnglishChoose a language for shopping. United StatesChoose a country/region for shopping.
© 1996-2021, Amazon.com, Inc. or its affiliates