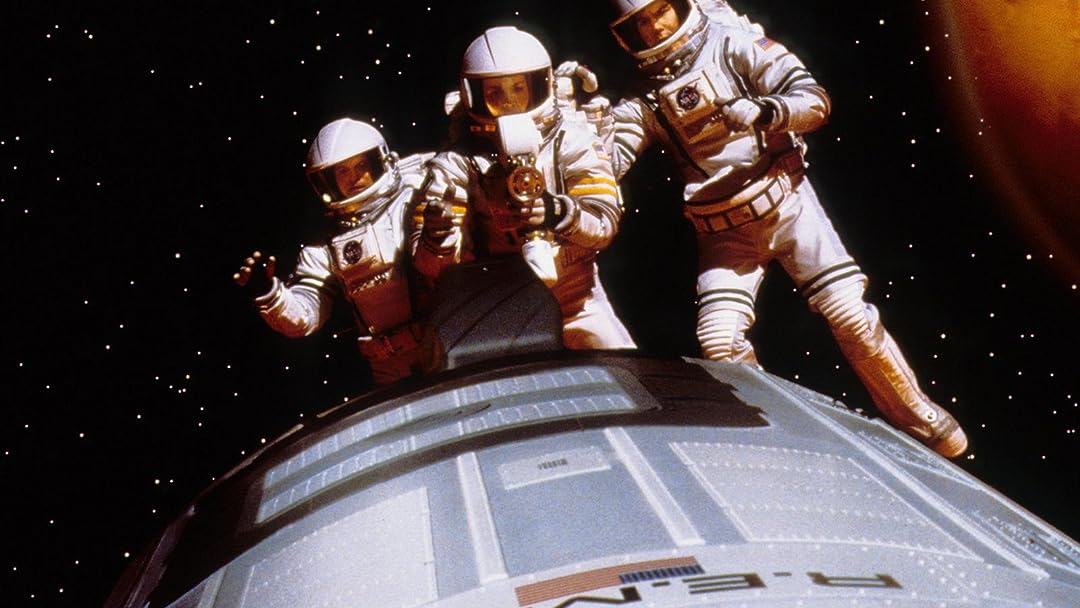 Mr. Goodcat SCReviewed in the United States on October 6, 2012
4.0 out of 5 stars
MISSION TO MARS
Verified purchase
"MISSION TO MARS" begins in 2020 with the introduction of all the crew members and their families at a farewell celebration before the launch of NASA's Mars One spaceship. The Mars Two will launch a year later and relieve the first team. We'll get to know all the members and their backgrounds so we can sympathize as they die horrible and agonizing deaths. Sound exciting, right? Well you be the judge.
The first team lands safely and the Martian landscape looks pretty convincing so after about a year of chipping away at rocks and probing our scientists finally have to investigate a strange looking object at the peak of a mountain. They point a radar at the thing and boost the power, they shouldn't had done that. All kinds of bad things begin to happen. Turns out the Martians left the security system on.
A grainy static frizzy message is bounced off a Martian satellite to Earth for help and the Mars Two team has to rush and prepare a rescue mission. The weird thing is the ship is renamed the "Mars Recovery". Which I'm to understand means you're too late for a live rescue and it's now considered a recovery. You know,like in recovering bodies.
Anyway, our heroes back on Earth take off to Mars and wouldn't you just know it, minutes before orbital insertion freaking meteoroids, pebbles in space that's going to really screw up the paint job on your new rocket ship. The good news is it's still under the sixty five million mile warranty. Bad news is they fix most of the holes except the most important one on an external fuel line and blow their ship up. Don't give up hope, after a major sacrifice and we go through the sad scene, we find most of our guys safely down on Mars. The wife of the poor guy that sacrificed himself seems to have recovered and she's okay now. If we learn anything from this movie it's that husband and wife teams are not a good idea on long trips in space or in my case the mall.
They find the sole survivor and repair the Mars One ship but before they return to Earth they have to tempt fate once more and go poking around that old Martian relic.
They figure out the message left by the ancient people and are shown the secrets of creation. Turns out Creationists and Big Bang Evolution theorists were both wrong and we lose another astronaut. Well not so much as lose but he doesn't go back to Earth. He was pouting all through the movie anyway because his wife became ill and died while they were training at NASA for the first Mars' mission, blah, blah, blah.
Okay, I'm a huge fan of just about anything to do with Mars so I'm going to give this movie four stars just for the background and effects. I think it's worth a look. I also recomend "Red Planet" offered here on AMAZON at a great price and you don't even have to leave home to buy it.
Please be kind to animals and report any abuse. Remember, without people the world would be a much better place, so do something.
Thanks, Goodcat S.C.[[ASIN:B004UFEJT4 Red Planet [Blu-ray]]] Hey look at that, they inserted a "Red Planet" product link right here on my review. That's so cool.

CHUCK L.Reviewed in the United States on September 13, 2022
5.0 out of 5 stars
Gary Sinese is great actor and great story..
Verified purchase
For space movie lovers add this to your collection. Pretty good special effects but a lot of just great acting and a really plausible story.

Stephanie E. HornReviewed in the United States on July 16, 2022
5.0 out of 5 stars
What NASA might find
Verified purchase
If NASA Would send up a rover to the plains of Cydonia on Mars, they will probably get all the information on previous life on Mars that they would ever need they already have various photos from Pathfinder and other satellites they sent up for Low Mars Orbit. What are they waiting for. We already know there is a Face on Mars, ruins of a city, and at least 3 pyramids Great movie to see.
One person found this helpful

Amazon CustomerReviewed in the United States on September 5, 2022
5.0 out of 5 stars
excellent movie
Verified purchase
this is truly a great movie... excellent actors

C. RicucciReviewed in the United States on September 26, 2021
4.0 out of 5 stars
Light entertainment, last 30 minutes are the best
Verified purchase
I'd forgotten much of "Mission to Mars" from when I saw it 18-20 years ago, and I'm a big fan of Gary Sinise & Don Cheadle, so it was a good re-watch on a weekend afternoon. The CGI is a bit dated but I guess that's not surprising after 20 years. Overall it's a pretty interesting light sci-fi, and Cheadle & Sinise are great in their characters. I wonder if the reason this movie was savaged by the critics is because it's not what fans generally expect from De Palma--suspense, horror, psychological thrillers. In any event, stay with it for the best part; the last 25-30 minutes are beautiful and touching.
2 people found this helpful

Mark GrindellReviewed in the United States on January 9, 2001
5.0 out of 5 stars
Very good - a work of conviction!
Verified purchase
I got this on "impulse" quickly and did not read the reviews. Woe was me - I read them later and tried to can the order, expecting a real turkey.
How wrong I was. I realize that the opening shots of the film are a little domestic, but in these scenes and in the remainder of the film I started to develop a broad suspicion which was later confirmed towards the end. Brian DePalmer did not like "Aliens", nor did he like "Psycho", or "Event horizon"... and naturally, the critics do not now like Mr DePalmer!
These films, whose mere mention makes me feel a bit queasy, are so distant from this film, I'm not surprised that this effort has attracted considerable fire. Mr DePalma has cut across convention and followed his instincts, and the result is very good indeed!
What De-Palmer has done is remarkable from several points of view. He has stuck to realistic physics - and I would be quite confident about maintaining this in spite of comments everywhere to the contrary - dialogue I would really want to believe in (assuming that the future is NOT some nightmare fusion between Macdonalds in space and the Bates Motel, in which case, you can count me outa here anyway), and observations about character and goodness that I would be very hopeful for and encouraged by.
The basic premise of the film is not so crazy at all, and is far, far more believable than the almost insane backdrop of ideas behind 2001. (having said that I guess I've really torn it now)
The music was the biggest surprise. My wife noticed this immediately, and she does not always take such sharp notice as I tend to. This score is far, far better than anything I have heard ouside of the debussy / Vaughan Williams / Delius grouping, and it is a great piece of work in it's own right.
The special effects are very well worked out, again, don't really violate physics or descend into a floorless mysticism, which has bothered me about a few recent films.
To more mundane matters. The DVD is organised very well, and my kids very much appreciated the extras, which include quite detailed expalnations of set construction and design. Some of this was really breathtaking. I think I must have just laughed and said something like, "wow.. no WAY could I do that!" As my kids are really interested in filming anyway, this section was a completely unexpected bonus.
19 people found this helpful

Paul S. PersonReviewed in the United States on November 30, 2020
4.0 out of 5 stars
Too ... Bland
Verified purchase
I watched this because de Palma has done some good films. I didn't buy it sight unseen because the reviews gave me pause.
This is the story of the second Martian Expedition, which was tasked with rescuing the first Martian Expedition even though the chances of anyone still be alive by the time they get there are so small they darn near waste the survivor on sight. Very realistic.
Possibly inspired by the "face on Mars" nonsense, this is also a film of First Contact with Space Aliens. I should say that, despite being nonsense, there is nothing wrong with putting it into a film; lots of films have nonsense in them and yet manage to be entertaining.
And this might be entertaining ... if you are in the mood to watch a very realistic depiction of space travel and its dangers which is sporadically exciting. Those more attuned to adrenaline rushes, however, may find it a bit bland.
One person found this helpful

Alicia DuranReviewed in the United States on July 8, 2022
5.0 out of 5 stars
Great movie
Verified purchase
Great and sad movie 🎥
One person found this helpful
See all reviews
Back to top
Get to Know Us
Make Money with Us
Amazon Payment Products
Let Us Help You
EnglishChoose a language for shopping. United StatesChoose a country/region for shopping.
© 1996-2022, Amazon.com, Inc. or its affiliates