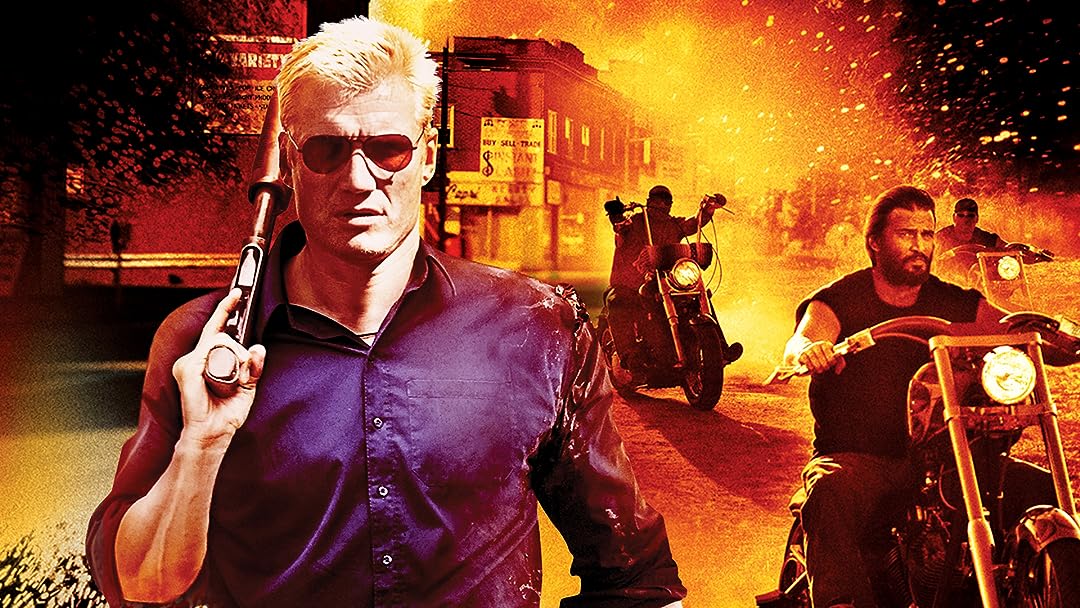 (213)
5.01 h 33 min2007X-RayR
A mysterious stranger rolls into town on a unique motorcycle. All he carries is the bible and a desire for justice. Past vengeance collides as Ryder rights an injustice from his past and liberates the small town from a malicious oppressor.

Perry Reviewed in the United States on May 12, 2022
4.0 out of 5 stars
moder retelling of "pale ride"
Verified purchase
4 star cause i really like pale rider its really less cause its not as good, this is cause there isnt a single good performance in it. the camera work isnt good either, for some reason maybe the camera man didnt know how to operate the camera and to fix it in the editing they turned the color down to almost zero except for red. maybe its some lame artistic attempt or they made it "pale" cause its a retelling. if you liked pale rider it is certainly worth a watch, that why i watched it. as bad as it is....as many remakes are, i still enjoyed it so i gave it 4 stars.

Fred ReadReviewed in the United States on September 28, 2022
5.0 out of 5 stars
Keeps you watching
Verified purchase
Good action drama. Kind of reminds me of a Jack Reacher novel. And that’s quite a complement

Texas AttorneyReviewed in the United States on October 23, 2022
3.0 out of 5 stars
Worth a few bucks... better than D!she's woke agenda.
Verified purchase
Just decent entertainment without a woke agenda...

T. WilliamsonReviewed in the United States on September 9, 2021
4.0 out of 5 stars
+Good modern action shoot 'em up
Verified purchase
Ignore the whiners pining for Clint Eastwood movies. Who actually watches Dolph expecting Clint Eastwood? Rminds me more of the Book of Eli than any Clint Eastwood....Definitely saw a paraphrase of the famous Billy Jack line..."nothin' you can do about it"...and that's appropriate in a sense, because the town thugs are giving the local rez indians a really bad time of it...So this movie is shot in a sort of dismal half-color that matches the mood of the action--like Denzel Washington movie "Eli". It's the quiet stranger with a past, likes reading the Bible, and small town thugs that pester him real good, so he shows them a thing or two...Bikers come around to take part in the final dance/party...FUN if you like watching the bad guys get what they deserve.
2 people found this helpful

Andrew PappReviewed in the United States on August 25, 2022
5.0 out of 5 stars
A great movie to watch
Verified purchase
No I

Weldon WebbReviewed in the United States on September 20, 2021
4.0 out of 5 stars
High Plains Drifter...on a bike
Verified purchase
I was skeptical at first. After viewing the movie these movies come to mind: Westerns of Clint Eastwood especially at the end- High Plains Drifter and Pale Rider- the preacher. The movie its quite clear that the young girl and her mother were attracted to him. I wonder if given a bigger budget, would Ludgren add more details because to me it left lot out or is absent in certain scenes
Overall, I enjoyed the movie especially the end. The protagonist disappears in the end.
One person found this helpful

Kindle CustomerReviewed in the United States on April 10, 2022
3.0 out of 5 stars
Worth a watch
Verified purchase
Feels like The Crow meets Dolph Lundgren, without the emotional investment.
An decent enough callback to a time with movies were simply good guys vs bad guys, without a whole lot of social propaganda shoehorned in to appease the twitter blue checks. What it lacks is an emotional connection to the protaganist, we know nothing of his backstory and he's so cold and distant, that there is really nothing to identify with.

NoneReviewed in the United States on June 16, 2021
3.0 out of 5 stars
Pale Rider was better
Verified purchase
It's an almost scene-for-scene remake of Pale Rider, only with motorcycles instead of horses, and the way Lundgren rides off at the end is more reminiscent of High Plains Drifter. Less ambiguous, though. Even the ways the bad guys are eliminated follows Pale Rider very closely. Some of the dialog is delivered like the last-minute stand-in for a part in a high school play, and some of the lines are just poorly written. There's some simple moralizing reminiscent of Billy Jack, and it feels out of place. That said, it's OK for what it is, a B-movie remake of Pale Rider in a modern setting. Interesting that this one is missing the line in Pale Rider "what's a clear conscience worth?", some form of which would have worked better here than what they actually did. If you haven't seen Eastwood's Pale Rider, watch it first. It's a far better movie. This one is OK to kill some time with, I gave it 3 stars. Maybe 2 1/2 would be better.
4 people found this helpful
See all reviews
Back to top
Get to Know Us
Make Money with Us
Amazon Payment Products
Let Us Help You
EnglishChoose a language for shopping. United StatesChoose a country/region for shopping.
© 1996-2022, Amazon.com, Inc. or its affiliates