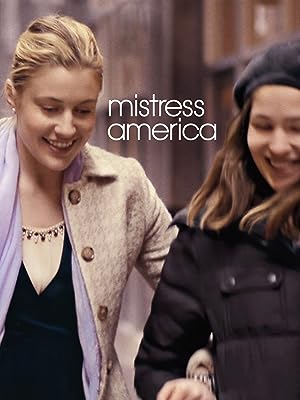 Baumbach has also made a living out of his quick wit and intellectual humor, but unfortunately in "Mistress America," he decided to throw intellect out the window.

There are a few redeeming factors: its Woody Allen-esque use of camera-work, fitting choice of music, and easy to like characters.

Though it doesn't live up to his previous films, "Mistress America" should be watched by Baumbach fans. If you don't like him, you won't like this; and if you haven't seen his other work, I recommend you watch that instead.

Kr9295Reviewed in the United States on June 5, 2020
5.0 out of 5 starsGreta Gerwig is genius
Verified purchase
I feel every time i watch Greta in movies I'm watching my awkward self in Manhattan. This movie didn't disappoint. Its what I was looking for in a Greta movie - characters that are great human beings with lots of small imperfections, but those imperfections may affect their life in the long run (or may not a all!). i'm looking for more like this. I've watched Francis Ha so many times. Greta is one who knows how to critique herself and her surrounding characters but make you love them as well for who they are.
One person found this helpful
Report abuse

FranimalReviewed in the United States on December 20, 2017
5.0 out of 5 starsFunny, Insightful, Greta Gerwig- how could you fail
Verified purchase
I love this movie. I know it’s kind of looked at as a lesser Noah Baumbach (especially as a lesser Frances Ha) but that’s like calling Talenti less than Florentine gelato. It’s probably true, but who cares? That means it’s an 8 instead of a 10. Greta Gerwig is irresistible, the writing is incisive, the send-up of the start of college and the literary societies is a quiet delight. If you like Frances Ha (and of course you do), Mistress America is definitely worth a try.

Oh and I guess this matters- the DVD/blu-Ray combo always proves useful, though not as useful as the digital HD code. (Seriously. All DVDs should have this). The extras were negligible.
4 people found this helpful
Report abuse

C PowersReviewed in the United States on January 26, 2016
3.0 out of 5 starsOdd but overall enjoyable
Verified purchase
I liked Mistress America. There were times throughout the film that were just outright strange and I really wanted to be a fly on the wall while Noah Baumbach was writing, but at the end of the movie I did manage to take away a couple of things, As always, Greta Gerwig delivers a charming performance. Her character was interesting, for lack of a better word, and I don't think anyone else could have pulled it off. Lola Kirke, despite her characters youthful self-centered egoism or maybe even because of it, gives a great performance as well.
2 people found this helpful
Report abuse

Jonathan HinsonReviewed in the United States on February 22, 2021
4.0 out of 5 starsIf you love Greta Gerwig as I do
Verified purchase
I generally enjoy Noah Baumbach's films but I have noticed that not everyone shares my view. It is not my favorite of his but I always enjoy Hedwig.
One person found this helpful
Report abuse

Wendy EiseleReviewed in the United States on March 23, 2021
5.0 out of 5 starsGreat Movie
Verified purchase
I was not expecting much, but was surprised at how good it was
One person found this helpful
Report abuse

SleepyheadReviewed in the United States on December 24, 2016
5.0 out of 5 starsWell worth the watch on a rainy afternoon with no husband or boyfriend in sight
Verified purchase
Greta is a consistently funny, commanding and luminous presence on the screen. It's funny that she is so under the radar, but maybe that is what makes her so effective as an actress.
5 people found this helpful
Report abuse
See all reviews
Back to top
Get to Know Us
Make Money with Us
Amazon Payment Products
Let Us Help You
EnglishChoose a language for shopping. United StatesChoose a country/region for shopping.
© 1996-2021, Amazon.com, Inc. or its affiliates