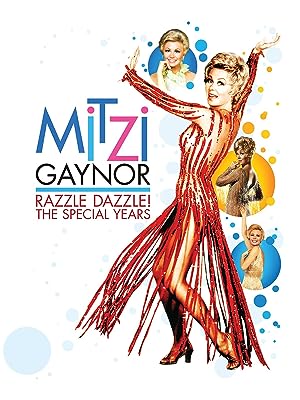 (69)8.458min200816+
An award-winning documentary that captures the fusion of song and dance, the costumes and excitement that were the hallmark of Mitzi's Emmy-winning television events. Mitzi and friends Carl Reiner, Kristin Chenoweth, Bob Mackie, Tony Charmoli, and Randy Doney offer reflections accompanied by footage from the archive to illuminate the behind-the-scenes stories and impact of her television events.

If you are too young to know who she is, Mitzi starred on many films including 'South Pacific' and 'There's No Business Like Show Business', was a huge hit in Las Vegas and on Broadway and holds the record for the longest applause during an Academy Awards show (Shew performed the song "Georgie Girl' to an endless standing ovation.

Her special were chock full of her enormous talent, lots of singing, dancing, comedy and lots of Bob Mackie gowns on her perfect body. Also a string of guest stars unlike no other show.

One of my favorites is the song 'Let Go!' She is surrounded by 24 dancers in tuxedos, wearing the most amazing, skin tight, shimmering, beaded gown and singing the great jazz song by Brazilian Baden Powell. The song simmers and explodes as does Mitzi.

Lisa36Reviewed in the United States on April 4, 2017
5.0 out of 5 stars
MITZI GAYNOR - WHAT DANCING !!!, WHAT A BODY, BOB MACKIE COSTUMES. Great DVD
Verified purchase
AH MITZI.... what great dancing. Now all we see on TV are pseudo-corpses on which pseudo autopsies are
done. Murders galore, one police drama which is so far-fetched with the reality of what police really face.
If it wasn't that MSNBC exists, I would now not even turn on the TV. Rachel Maddow saves the day for me.
BUY THIS DVD....IT IS SO WORTH IT.
2 people found this helpful

David Emil HendersonReviewed in the United States on March 30, 2009
5.0 out of 5 stars
Miss Mitzi Gaynor's Specials -- TV's Diamond Years
Verified purchase
A spring storm had caused a Montana power outage in 1977; so I missed Mitzi Gaynor's "Zings Into Spring" television Special that year. None of her 10 years of Specials were repeated or released on tape, and I had to wait more than 30 years to FINALLY see some clips from "Zings Into Spring" on this "Razzle Dazzle! The Special Years" DVD. Well... it certainly was worth the wait!

I realize that praising a show too lavishly can raise expectations to the point where some people may be disappointed when they see it for themselves. Personally, I can't think of ANY television experience in these 30 years that comes close to Mitzi's Specials for pure delight, and I can't imagine anyone not being royally entertained (except maybe those who are dead).

As live audiences often do after a bravura performance, I want "More! More! More!" -- a full DVD set of every Mitzi Gaynor Special in its entirety. Critics have alluded to the 1950s as television's Golden Years, but I regard Mitzi's specials as television's Diamond Years. Their sparkle just never dims.
3 people found this helpful

Della MacReviewed in the United States on December 20, 2008
5.0 out of 5 stars
Mitzi does not disappoint!
Verified purchase
I was just a preteen when Mitzi was on television, but I remember that my older brother just adored her. After viewing this DVD, I now know why. Mitzi is absolutely fabulous. I have seen biographies on television of Mitzi and was sorry there was not more to see. The biographies I saw were only her movies (which were also spectacular), but no television. Wow, what a treat to see this beautiful lady on the small screen too. I just wish she had an autobiography penned by her own hand to read as well. She tells the most wonderful stories about old Hollywood. I am glad I got to see this DVD now, that I am an adult, so I can truly appreciate her talent and beauty. Here I thought Cher had the most beautiful figure on television in spangles and beads. I had no idea that it all started with "Mitzi." Do yourself a favor and buy this DVD. It is truly eye-candy for what glamour really is all about. You are simply divine, Mitzi!
3 people found this helpful

Gene CiscoReviewed in the United States on December 19, 2009
5.0 out of 5 stars
Mitzi, not itty bitty, but MIGHTY talented.
Verified purchase
In a three-minute period in the 70's I had the opportunity to see one of her TV specials, and I passed on her, a misjudgement I greatly regret. A long Beatles fan, a few years ago I acquired the Ed Sullivan complete shows featuring the Beatles. Of all the acts that shared the stage with the Beatles, the one act that knocked my eyes and socks off was the 9 minute set with Mitzy and her male dancers displaying the heat of their "Too Darn Hot" number. I hope to acquire her entire TV specials that were timeless and classy in every sense of the word from just a single viewing of highlights in the opening documentary about this gigantic talent. As a photographer, there is so much to applaud in this review of the Mitzi years here,including the staging, lighting, choreography and creativity etc. that to do justice would take too much space. In short, if you want to see the female counterpart of the post-Astaire years explode the color TV into the new millenium and the artistry of dance with it again and again, grab this item quickly. The hour long sweep of her career will whet your appetite for dance cravings and you can feast on the 8 special-featured numbers that follow and wait for the release of her specials.
6 people found this helpful

Larry BillmanReviewed in the United States on November 23, 2008
5.0 out of 5 stars
A great visit with a great star
Verified purchase
This part-documentary/part-sheer entertainment is long overdue. Mitzi Gaynor has always been a favorite, with "The 'I Don't Care' Girl" being a revelation in my life and sense of dance-filled entertainment. Watching this DVD brought back many memories and pleasures. Including the people who collaborated in her very SPECIAL "Specials" adds to the pleasure: Bob Mackie, Tony Charmoli, Randy Doney and Alton Ruff. Masters all! Plus the great respect shown to other choreographers who helped create these movie musicals (and they were THAT) like Bob Sidney, Peter Gennaro and Danny Daniels in on-screen credits validates the credibility of the filmmakers. Mitzi's self-effacing humor and honesty are a revelation in these days of "stars of the moment" who are merely spouting what they were told to. She has the ability to move from "laugh-out-loud" to "from the heart" in an instant. I had forgotten how brilliant her pieces as "The Kid" are - showing other layers that the lady could tap into. The music, dancing, costumes, staging and performances remind me of what is missing from contemporary performances. Let's abandon the noise, the explosions, the in-your-face aggressive dancing and take a good look at what a very talented human can do. Thanks for this one - and to Amazon for the quick shipping and pristine copy they sent.
15 people found this helpful

My Three CentsReviewed in the United States on February 9, 2009
5.0 out of 5 stars
SHE'S NUMBER ONE!
Verified purchase
I've always known that Mitzi Gaynor reached a level of entertainment excellence that has never been surpassed by another musical performer. "Razzle-Dazzle" proves it. This woman's versatile and astounding talents are an absolute joy to watch. I hope someone will soon make all her t.v. shows available for purchase on DVD. I can't say it enough: Mitzi Gaynor's talents are extraordinary and an entertainment feast. Don't miss "Razzle-Dazzle" - it's a classic musical DVD and features a classic musical, MAJOR, unsurpassed talent: "Presenting! Miss Mitzi Gaynor!"
One person found this helpful

Judy WestReviewed in the United States on December 28, 2008
5.0 out of 5 stars
MORE, MORE, MORE
Verified purchase
MORE, MORE, MORE PLEASE!!! I love MG and was thrilled to find a new DVD. I saw her in the audience at Dancing with the Stars and wondered then why they did not introduce one of the greatest dancers ever. I saw her in person in the 70's and boy what an entertainer she was and is!! I know her new show will be just as great as the ones on this DVD. I highly recommend this DVD for just sheer fun and escape from daily life. A great trip down memory lane. All of the Bob Mackie gowns were a major bonus on this video along with the interviews. LOVED IT!!!!!
One person found this helpful
See all reviews
Back to top
Get to Know Us
Make Money with Us
Amazon Payment Products
Let Us Help You
EnglishChoose a language for shopping. United StatesChoose a country/region for shopping.
© 1996-2021, Amazon.com, Inc. or its affiliates