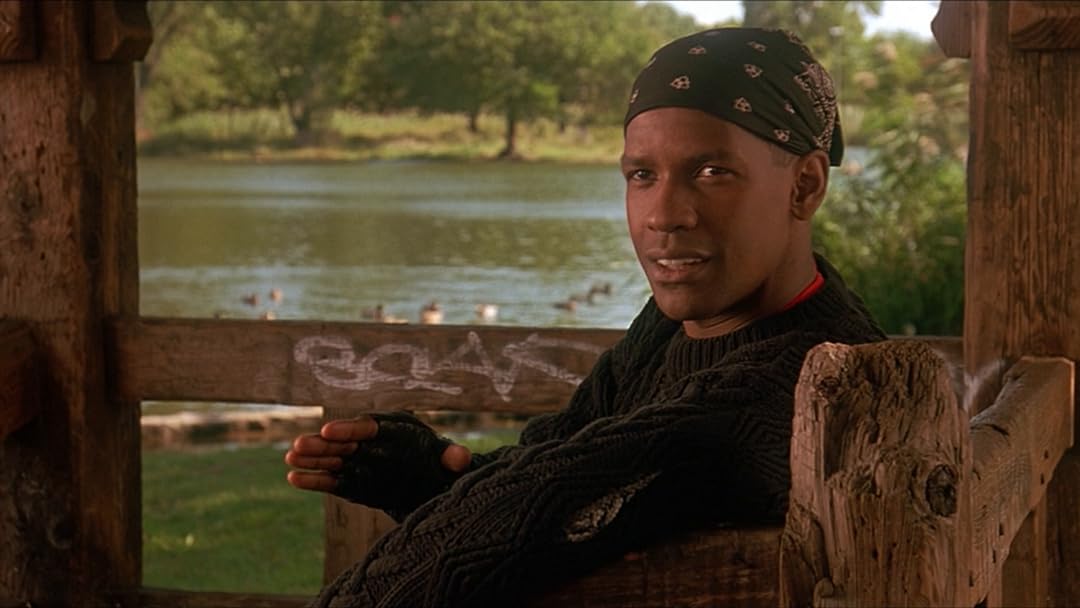 Bruiser StoneReviewed in the United States on September 23, 2021
5.0 out of 5 stars
A Love Supreme...Coltrane's spirit as an omnipresent character in Mo' Better Blues.
Verified purchase
Gorgeous and deeply soulful jazz film by Spike Lee. I have watched it many times over the years and as I have become more obsessed with jazz over other forms of music, this film takes on new and deeper meaning. Can't be ignored, first and foremost, what a MASSIVE guiding spirit St. John Coltrane is to this film -- seriously, he is like a character in the film, to which the musicians essentially revere and worship. You may or may not pick up on it -- you really ought to since Trane's quotation is shown at the end of the film, A Love Supreme cover is blown up in Bleek's pad and shown constantly, Shadow is shown buying tons of Trane discs at the record shop, the entire closing montage runs over A Love Supreme, Bleek's mental breakdown after his beating leaves him delusionally jamming with Trane in his mind, Shadow is introduced as playing both soprano and tenor sax a la Trane, on and on...to understand this film is to get that Coltrane is its patron saint, just as he is to a large extent the patron saint of jazz musicians (and jazz listeners).

Why is Trane's ubiquitous influence so important to Spike's film? Consider Spike's protagonist, Bleek, whose problem until the third act has been selfishness. He is asked by Shadow at one point if his problem might be that the only music he can hear is his own -- ironically using music as a shield against emotional vulnerability in his intimate relationships, we see Bleek as a womanizer, caring little for how his two women might feel knowing he is two-timing them, ignoring their needs and desires. He also shuts down his bandmate Shadow's quite natural desire to develop his own music instead of nurturing it. Coltrane, from the prime of his career when A Love Supreme was cut in '64, until he was cut down in the prime of his life by illness in '67, had become a kind of benchmark for spirituality, love and intellectual thought in the jazz scene. He changed things quite a lot for the jazz community, and specifically Black jazz musicians, who saw in him a purity of spirit and progressive thinking which younger musicians who looked up to him sought to emulate. I don't think it is going too far to say that Trane was and is revered as the apex of Black Conscious Jazz Musicianship, Love and Thought.

Thus, I would submit that Spike Lee's Coltrane symbolism in Mo' Better Blues is not merely ornamental, and it is a mistake to overlook it -- it is central to the missing piece of Bleek's personality, since we get the sense that he is not necessarily a terrible person trying to hurt people. He just doesn't know how to love anyone, and has become a selfish person when we meet him. So he womanizes and carries on as a kind of narcissistic musician who uses people. It is only when his best friend and lackey gets him into hot water -- really, it is Bleek himself who gets himself into hot water, through a show of friendship in defending his friend, one of the few signs we see of him showing love for another person -- that he suffers a fall from grace, a physical beating that he takes which leaves him unable to play music. The one thing that meant everything has been taken from him, and life has brought him to his knees. Humbled, he spends a year essentially living through a mental breakdown, until he realizes he can no longer play music. Then, he finds out that it is only love that will actually save his sorry ass -- it is Indigo, his perfect loving mate, who he two-timed and debased before, from whom he will now need to seek love, forgiveness, mercy and refuge.

We finally see Bleek redeemed in the final act -- no longer a working musician, perhaps, but as close as we can possibly see him get to the spiritual ideals propounded by Coltrane in his music and ideas to be found in A Love Supreme and throughout his work. (The same ideas, ahem, behind Bleek's giant poster on the wall that he's been casually ignoring throughout the movie.) We see Bleek marry Indigo in a beautiful outdoor Brooklyn ceremony surrounded by loving friends and family as A Love Supreme is playing. They have a child, who we see come into the world to A Love Supreme. All the while, it is as if Trane himself is omnipresent in the film, participating in Bleek's life, finally nodding with approval as he looks down from the heavens. Before this montage, we had not really heard Trane's music; now, he is on full blast.

Coltrane made incredibly cosmic music with his wife Alice; they had a son Ravi who became a great tenor and soprano sax player like his father, in his own way. Likewise, Bleek and Indigo have a son, aptly named Miles, who we see at the end of the film learning trumpet -- just as we saw at the start of the film back in '69, bookended moms Abbey Lincoln (legendary jazz singer and Max Roach's wife) and Joie Lee yelling out the window at the kids -- deja vu! Classic.

One final point to note: Spike Lee's father Bill Lee scored this film -- Bill Lee was an amazing jazz bass player who played on a ton of fantastic records on the legendary Strata-East label in the early '70s, including a record called The Descendants of Mike and Phoebe: A Spirit Speaks - a family band project consisting of Bill, his brothers and sisters in a group named after their slave ancestors. One of the songs is called "Coltrane" -- the same gorgeous tune he recorded as "John Coltrane" with Clifford Jordan on Jordan's epic Glass Bead Games album for Strata-East.

The Trane love runs deep in the Lee family. This film feels a little like Spike Lee's love song to his father, to jazz, and to Coltrane.

joel wingReviewed in the United States on April 4, 2021
4.0 out of 5 stars
Can Denzel realize there's more to life than his art?
Verified purchase
Mo Better Blues is about a Jazz musician Denzel Washington whose whole life revolves around his art. That means everything else is secondary including the women in his life. That’s what leads to the conflict in the story. Denzel shines as usual. It’s also not the kind of character you’re used to seeing him play. He’s so self-centered. The story is about whether he can get out of his egocentric world and find out there’s more to life.

The movie might have been partly inspired by Spike Lee’s father who was a musician himself.

A lot of the cast came from Do The Right Thing which was released the year before. That included Bill Nunn, Giancarlo Esposito, Robin Harris, John Turturro, Samuel L. Jackson, Spike’s sister Joie Lee, and of course Lee himself.

Finally, I love the ending which bookends the start.
One person found this helpful

A CrumbakerReviewed in the United States on December 28, 2019
4.0 out of 5 stars
worth watching
Verified purchase
Overall I liked this movie. Entertaining and good to see early Denzel Washington in such an atypical role. Plus a ton of other big stars in their early years. Entertaining and good job done by all! The only thing that made me give this movie 4 stars instead of 5 is that the ending kind of felt anticlimactic. Eventhough this film ends on a good note, I guess for me, when Cynda Williams sang towards the end thats when the whole movie dropped off. Her singing I think needed to be better or something else....not too sure but I think there needed to be more drama in that scene and the ending somehow maybe felt rushed and kind of corny too.
2 people found this helpful

LaWandra CrummieReviewed in the United States on October 25, 2020
3.0 out of 5 stars
A quirky Spike Lee Joint.
Verified purchase
I had never seen this movie in its entirety. I finally have. It was okay. What really made it watchable was Denzel of course and Wesley Snipes. I was surprised to see bit parts by Samuel Jackson and Charlie Murphy!
It was Spike Lee at his earlier quirky filming self. But I like his sister as an actress though.

DejuanReviewed in the United States on December 24, 2019
5.0 out of 5 stars
Wonderful blues
Verified purchase
One of my favorite old school Denzel movies. Bleak's(Denzel's character) ongoing struggles with his band mates, manager and love triangle were to me a perfect drama. Great movie if you ever get a chance to watch.
2 people found this helpful

R. HarrisReviewed in the United States on December 17, 2002
4.0 out of 5 stars
Under rated gem.
Verified purchase
Ok Denzel is in it playing a bit of a cad. But the real news here is that this is one of Spike's better movies, unlike the forgetable Girl 6 or Bamboozled, both nice efforts but far off the mark. Wesley Snipes, who to me is always better when he plays an evil character, is wonderful in this. Denzel is a little on the flat side in this one, this isn't a Malcolm X or Training Day performance for him. Wesley is wonderful. No action hero [stuff], just a great acting job. Spike is in it as expected and does his usual in his role. Joi Lee is credable and the soundtrack is good if not spectacular. If you are a Spike or a Wesley fan, add it to your collection. If not rent it and give it a look, its worth the price of a rental for sure.
3 people found this helpful

Rev. Raynal A MondenReviewed in the United States on June 12, 2018
5.0 out of 5 stars
Rev. Monden: See, Even then the gift was there!
Verified purchase
Very good classic. A very good story plot, but wonderful to see many actors, actresses, even movie director, and/or producers before they became the Grammy & other famous award-holders they all are today!! It's like seeing them in pre-school (lol) But even here u see all of them had the talents for theater!!
One person found this helpful
See all reviews
Back to top
Get to Know Us
Make Money with Us
Amazon Payment Products
Let Us Help You
EnglishChoose a language for shopping. United StatesChoose a country/region for shopping.
© 1996-2022, Amazon.com, Inc. or its affiliates