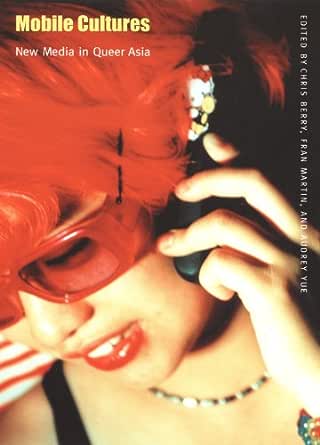 Flip to back Flip to front
Audible Sample Playing... Paused   You are listening to a sample of the Audible narration for this Kindle book.
Learn more
ISBN-13: 978-0822330875
ISBN-10: 0822330873
Why is ISBN important?
ISBN
This bar-code number lets you verify that you're getting exactly the right version or edition of a book. The 13-digit and 10-digit formats both work.

Mobile Cultures provides much-needed, empirically grounded studies of the connections between new media technologies, the globalization of sexual cultures, and the rise of queer Asia. The availability and use of new media—fax machines, mobile phones, the Internet, electronic message boards, pagers, and global television—have grown exponentially in Asia over the past decade. This explosion of information technology has sparked a revolution, transforming lives and lifestyles, enabling the creation of communities and the expression of sexual identities in a region notorious for the regulation of both information and sexual conduct. Whether looking at the hanging of toy cartoon characters like “Hello Kitty” from mobile phones to signify queer identity in Japan or at the development of queer identities in Indonesia or Singapore, the essays collected here emphasize the enormous variance in the appeal and uses of new media from one locale to another.

Scholars, artists, and activists from a range of countries, the contributors chronicle the different ways new media galvanize Asian queer communities in Taiwan, South Korea, Japan, Indonesia, Thailand, Malaysia, India, and around the world. They consider phenomena such as the uses of the Internet among gay, lesbian, or queer individuals in Taiwan and South Korea; the international popularization of Japanese queer pop culture products such as Yaoi manga; and a Thai website’s reading of a scientific tract on gay genetics in light of Buddhist beliefs. Essays also explore the politically subversive possibilities opened up by the proliferation of media technologies, examining, for instance, the use of Cyberjaya—Malaysia’s government-backed online portal—to form online communities in the face of strict antigay laws.

The Amazon Book Review
Book recommendations, author interviews, editors' picks, and more. Read it now.
Create your FREE Amazon Business account to save up to 10% with Business-only prices and free shipping. Register today

”Mobile Cultures is a feast of a collection. This compelling anthology renders the mediated queer realities of Asia within a more dynamic global frame. Studies of the Internet, cinema, and other technologies unmoor queer Asia from its static and sedentary locations. A necessary addition to the burgeoning field of transnational queer cultural studies!”—Martin F. Manalansan IV, coeditor of Queer Globalizations: Citizenship and the Afterlife of Colonialism

"[A]n important addition to the growing field of queer media studies, and by repositioning the field away from its Euro-American coordinates, the book creates a necessary international space for critical comparative perspectives to flourish."
-- John Nguyet Erni ― Popular Communication

"[I]f you don't know what MOTSS BBS are ("members of the same sex bulletin board systems") and want to find out, this book would be the place to start."
-- Bradley Winterton ― Taipei Times

"As spelt out lucidly in the introduction and acted on earnestly in most of the essays, Mobile Cultures as a whole has a coherent polemical take on the phenomenal rise of l/g/q formations in Asia (and other parts of the world). . . . And through concrete analysis of specific cases, the collection critically examines the question of whether the impact of globalization is homogenizing . . . or in effect 'glocalising.'"
-- Wei-Cheng Raymond Chu ― Cultural Studies Review

"Mobile Cultures is a feast of a collection. This compelling anthology renders the mediated queer realities of Asia within a more dynamic global frame. Studies of the Internet, cinema, and other technologies unmoor queer Asia from its static and sedentary locations. A necessary addition to the burgeoning field of transnational queer cultural studies!"—Martin F. Manalansan IV, coeditor of Queer Globalizations: Citizenship and the Afterlife of Colonialism --This text refers to the paperback edition.

""Mobile Cultures" is a feast of a collection. This compelling anthology renders the mediated queer realities of Asia within a more dynamic global frame. Studies of the Internet, cinema, and other technologies unmoor queer Asia from its static and sedentary locations. A necessary addition to the burgeoning field of transnational queer cultural studies!"--Martin F. Manalansan IV, coeditor of "Queer Globalizations: Citizenship and the Afterlife of Colonialism" --This text refers to the paperback edition.

Chris Berry is Associate Professor in Film Studies at the University of California, Berkeley. He is author of A Bit on the Side: East-West Topographies of Desire and editor of several books including Memoirs from the Beijing Film Academy: The Genesis of China’s Fifth Generation, published by Duke University Press.

Fran Martin is Lecturer in the Cinema Studies Program at La Trobe University in Australia.

Audrey Yue is Lecturer in the Cultural Studies Program and Department of English at the University of Melbourne in Australia.