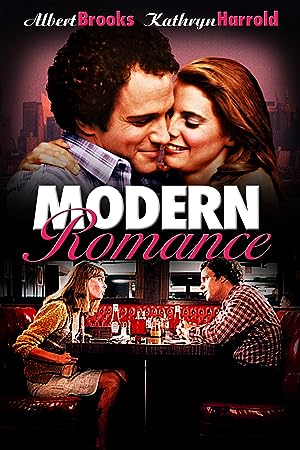 (144)7.01 h 34 min1981R
A brilliant, hysterically funny comedy starring Albert Brooks as a film editor desperately trying to commit himself to his girlfriend (Kathryn Harrold). Brooks endures all the torture and joy of being in love throughout the course of the film.

Allen Garfield's #1 fan.Reviewed in the United States on February 27, 2020
5.0 out of 5 stars
Classic Albert Brooks. (And one of Kubrick's favorite films.)
Verified purchase
Albert Brooks is so underappreciated. Modern Romance was his second movie as a director. He’s also the writer and the star. At this point he had worked with Saturday Night Live, was on Johnny Carson a fair bit, and appeared in Taxi Driver - he was Cybill Sheppard's colleague. (He improvised most of the dialogue for the part, which was underwritten.) Real Life, his first film (co-directed with Penelope Spheeris - Wayne's World, The Boys Next Door and the three part doc: Decline of the Western Civilization) was a send-up of the landmark documentary, An American Family - the first so-called "reality show" which aired on PBS.

Modern Romance is about a film editor, Robert Cole, who has an off/off relationship with his girlfriend, Mary Harvard (played by Katherine Harrold). Robert is a totally neurotic, self-absorbed narcissist who can’t figure out whether he should be with her or not. When “romantic” films work, it’s because they are based on obsession or insanity. This is something that Brooks definitely understands.

Robert is in the middle of editing a science fiction film for American International Pictures(!), a bad Z-movie with George Kennedy, who appears as himself. The film is full of in-jokes about Hollywood—for example, there’s a great bit where they’re doing the Foley work for the film and on the loudspeaker you hear the announcement of the next project that’s about to come in: "we have Heaven’s Gate, the short version." His two co-workers are played by Bruno Kirby and James L. Brooks.

Robert is horribly jealous, and is convinced that Mary is having affairs. Of course, he also despises himself and is constantly beating himself up. Stanley Kubrick told Brooks that he was impressed by the movie and always wanted to make a film about jealousy—and 18 years later, he did: Eyes Wide Shut. Brooks is often compared to Woody Allen, but I would say that Brooks is a much better writer. He’s also far more cynical, and nothing ever ends well in his projects. The character he always plays constantly teeters on the edge of violence.

Modern Romance also includes one of the greatest ever scenes of physical comedy. Robert is given some Quaaludes to sleep off his breakup—he sleeps, but stuff happens… it definitely rivals the famous Quaalude scene from Wolf of Wall Street. Brooks has brilliant comedic timing, and the film is full of fantastic one-liners. Unlike most romantic comedies, it continuously pulls the rug out from under the audience. The last scene is a case in point. You think it’s going to have a happy ending, but with each bit of text that shows up on the screen, the story gets increasingly worse. This part is scored by the sappiest song remotely possible, “You Are So Beautiful” by Joe Cocker, which makes sure that the cynicism of the film and the text really hits home.

Brooks is one of the great comedic directors and writers, far darker and more cynical than Woody Allen ever was. He does work with his cinematographer in exactly the same way that Allen works with Gordon Willis: while Brooks rehearsed with the actors on the set, and once they were ready, they left and the cinematographer and crew did the lighting and set-up for the take. Brooks’s big theme is dismantling the American dream. The rom-com ideal is a perfect vehicle, and he continues the trend in his next film, Lost in America, which is road movie. In fact, you can see the germ of the excellent Lost in America taking root in Modern Romance.

Although he’s one of the great American filmmakers, Brooks’s films have been really hard to get in the U.S. on a bluray format —and that’s a real shame. Hopefully this re-release will bring new attention to his work. Unfortunately, many of his later films are owned by Warner Brothers, which doesn’t do many re-releases (in fact, his most recent film wasn’t even released abroad

John SReviewed in the United States on February 26, 2021
5.0 out of 5 stars
Great story and excellent acting and direction.
Verified purchase
It's one of my favorite movies so my review may be a bit prejudiced. It is; in my opinion ; one of the best and most unique romantic comedies I've had the pleasure to watch. Be aware that I am an Albert Brooks fan so that may play into my review. But I have to say that this was the first movie I saw with Albert Brooks. I can relate to the situation. Sometimes love can drive toy a bit crazy. I enjoyed the scenes where the Albert Brooks character was working as it gave some insight into how the sound aspect of movies is handled. One of my favorite scenes was when he went to purchase clothing and shoes for working out. His brother plays the character or the sporting goods salesman. Just a wonderful movie, in my opinion. Watch it and see for yourself.

KGReviewed in the United States on April 18, 2016
4.0 out of 5 stars
Very funny 80s Albert Brooks look at neurosis and love.
Verified purchase
Often very funny look at a very neurotic man’s effort to deal with a break up – one in an endless series of break-ups and reconciliations with the same woman, very well played by Kathryn Harrold. She manages to make the object of Brooks affection neither perfect nor a nightmare, but a real live, confused, exasperated woman dealing with a guy she loves -- who is clearly a disaster at relationships.

The film is more a collection of funny set pieces and sketches then a flowing narrative, which keeps it from having the underlying emotional depth of, say, some of Woody Allen’s films from the same period about relationships. But some of these pieces are so funny (e.g. a depressed, ever more stoned Brooks making phone calls and fawning over his beloved record collection – done so perfectly that it's side-splitting) that they make the film well worth seeing, even if you’ll remember the laughs much more than the characters and the story.
5 people found this helpful

True JoyReviewed in the United States on February 4, 2019
3.0 out of 5 stars
Doesn't hold up over time
Verified purchase
My husband wanted to watch this, remembering that he really like it when it came out. But, not so much now.
2 people found this helpful

language nutReviewed in the United States on October 25, 2020
1.0 out of 5 stars
Not my cup of tea
Verified purchase
Not sure why this film is so highly rated. Only gave me one really good belly laugh the whole evening. My idea of a good romantic comedy is "Groundhog Day" or "It Happened One Night," just by way of example.
One person found this helpful

Mitchell CassmanReviewed in the United States on May 7, 2006
5.0 out of 5 stars
ALBERT BROOKS AT HIS BEST
Verified purchase
If you're at all familiar with Albert Brooks's work, you know exactly what you're getting into here. Another study of neuroses and how they impact (negatively) on relationships between the sexes.

Brooks, as usual, plays the usual and same character, himself. with Kathryn Harrold as the love of his life. Brooks is up to his usual insecurities here wondering whether Harrold is cheating on him, obsessing over every little detail. One of the best scenes in the film is when he's depressed over one of the many breakups and is given Quaaludes to relax him. When they start to kick in he starts a rant on how great his belongings are. Loving everything he owns including his record collection, his bird "Petey", and deciding to go through his rolodex and calling old girlfriends.* (*When doing Quaaludes stay away from the phone.)

Modern Romance has its best moments when it has nothing to do with the Brooks-Harrold story, but rather when Bruno Kirby as Brooks's best friend is on screen. Another highlight is the film that Brooks and Kirby are editing, an absurd, cheesy sci-fi romp starring George Kennedy. It's got nothing whatsoever to do with the main storyline, but is the most memorable part of the movie which makes the repetition and relative tameness of the primary plot seem all the more obvious. If you like Albert Brooks you'll like this movie. If you don't know his work, picture George Costanza in his own show.
10 people found this helpful

Buffy The Movie SlayerReviewed in the United States on November 23, 2005
5.0 out of 5 stars
Modern Romance still a Modern Comedy
Verified purchase
As a big fan of Albert Brooks films, Modern Romance is by far I think one of Albert Brooks funniest movies. I have already seen it several times and each time I laugh equally at the great lines I already know are coming. A classic story of how a couple keeps breaking up and getting back together again and a man Albert Brooks, a Hollywood film editor, who tries to overcome his heartbreak and then tries to win his love's heart back. It is a must for anyone going through a break up, anyone that is a part of a couple or even singles. Modern Romance takes place in the early 80's, so the time travel back as you watch this movie makes it even funnier as you watch the outdated clothes, hair styles, music and way of living. The dialog of this film is brilliantly funny. Albert Brooks is a riot and adorable. I have been waiting years for this film to come out on DVD as my homemade from tv video copy is getting worn. Don't hesitate to buy Modern Romance. It is a purchase you will enjoy over and over. Save the elemet of suprise for yourself and avoid reading any long detailed reviews or dialog quotes on this film. Everyone I have turned onto this film has never been disappointed. Trust this one is a 2 thumbs upper.
6 people found this helpful

cannotlogonReviewed in the United States on May 29, 2006
5.0 out of 5 stars
Every line, every scene, BRILLIANT!
Verified purchase
Albert Brooks is, for some, an acquired taste. His diehard fans love virtually everything he has done, and then there are those who simply don't "get" him. Whichever camp you fall into, this film appeals to everyone. Brooks embodies the typical guy caught in one of those relationships that simply doesn't work but cannot be walked away from. This movie is an insightful comedic tribute to the fact that being obsessed with someone is NOT a healthy basis for a loving relationship.

Spectacular performaces from Mr. Brooks, Kathryn Harold, Bruno Kirby, and terrific cameos from James L. Brooks (no relation), Bob "Super Dave Osborne" Einstein (who IS Brooks' brother....Yes, Albert Brooks real name is....Albert Einstein!), George Kennedy and, believe it or not, Harlem Globetrotter Meadowlark Lemon. If for no other reason, see this movie for "the movie within the movie" that Brooks' and Kirby's characters are editing. "You're acting like little WEASELS!"

Enjoy...very highly recommended!
12 people found this helpful
See all reviews
Back to top
Get to Know Us
Make Money with Us
Amazon Payment Products
Let Us Help You
EnglishChoose a language for shopping. United StatesChoose a country/region for shopping.
© 1996-2021, Amazon.com, Inc. or its affiliates