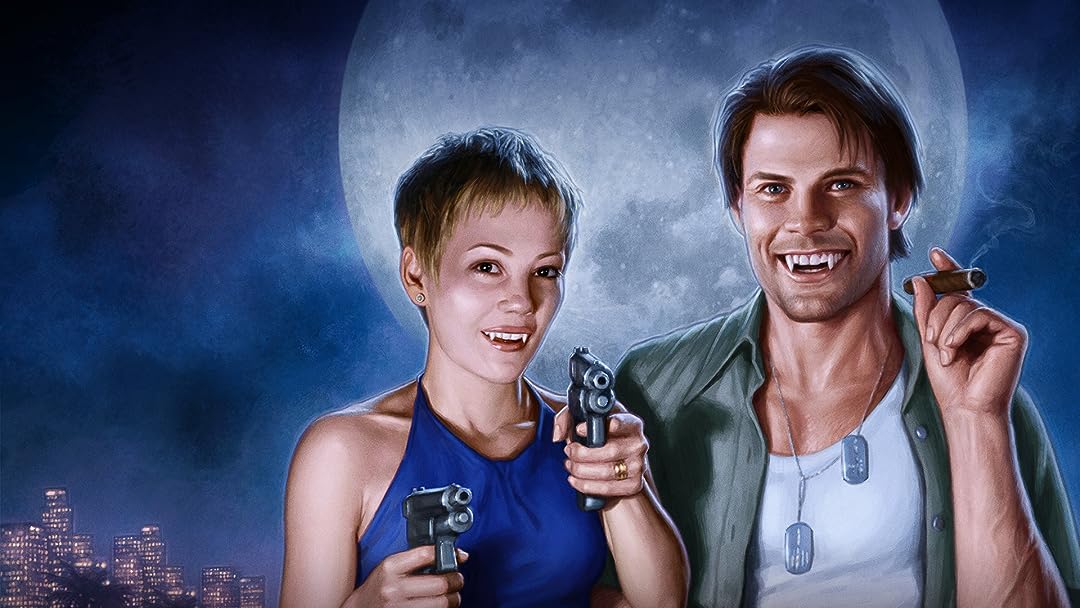 OneiroReviewed in the United States on June 14, 2022
2.0 out of 5 stars
Natasha Lyonne couldn't even make it worth watching.
Verified purchase
I watched the whole thing, but I never will again. It's pretty cheesy, often in a cringy way. All the vampires were so scared of Van Helsing, but he doesn't kill a single vampire during this entire movie. He just yells at other people to do it. He acts sort of lost all of the time, like he's never really sure what's going on. Most of the acting isn't very good. The vampires sing "she'll be coming around the mountain" at one point. I'm not sure what that's all about. These vampires are all extremely easy to kill. Helsing says more than once that they're more powerful at night and they don't stand a chance, but they barely have to try. The vampires are better at killing with guns for some reason. There's tons of guns in this movie as though they were donated a box of random movie props and felt obligated to accept.
4 people found this helpful

Randini SpelcherReviewed in the United States on July 3, 2022
1.0 out of 5 stars
Too campy to be classified "Horror" not campy enough to be classified as Comedy
Verified purchase
I think Ed Wood must have helped direct this. It should be used at film schools as examples as what doesn't work. Terrible campy acting, terrible campy story with not enough cohesion to keep it all together. This makes "B" movies look like straight A's.
If you want a good horror movie skip this.

Also Amazon is turning into a piece of garbage, you have to watch the "entire" feature to write a review, what a crap system. It can't just add "Customer only watched %xx" of this to the review? This is helping dumpster fire movies like this keep it's sham higher rating.

michaelReviewed in the United States on June 13, 2022
1.0 out of 5 stars
If you're looking for a spoof, here it is...
Verified purchase
This movie was HORRIBLE! I love vamp shows, and this one showed 4.5 stars, so I was excited! The script was lame, the acting even worse! I could go on, but I just wasted nearly two hours on this flick, and don't want to bother wasting any more...
2 people found this helpful

Kindle CustomerReviewed in the United States on July 27, 2022
1.0 out of 5 stars
So, so bad.
Verified purchase
I wasn't expecting much so it didn't disappoint too much. Clearly this was a low budget straight to stream movie. Some of the cast were decent, but the majority of them were clearly not made for acting. Excessively bad acting, with poor plot and dialogue made this so bad you just keep watching to see how much worse it gets, and it gets worse as it goes on.

BradleyReviewed in the United States on July 8, 2022
5.0 out of 5 stars
90s Vampire Sexiness
Verified purchase
This film is everything you want a vampire movie to be! From kinky vampire love scenes, to over the top gore, this film has the goods! Kim Cattrall is phenomenal and the rest of the cast are great too. 10/10 and a walk down pleasure lane!

DerparatorReviewed in the United States on October 10, 2019
4.0 out of 5 stars
Pure cheese
Verified purchase
If you buy this expecting a highly polished narrative with Oscar caliber performances you are an idiot. It's a cheesy, crappy, and fun B-Movie, one of the great ones before Syfy and The Asylum started crapping out CGI cringefests left and right.

It has fun performances, an opening score by Danny Elfman. The actors ham it up and have fun and it's not boring.

It's a good late night movie, or if you need a film to riff on with your friends.

Jewel AdamsReviewed in the United States on November 5, 2003
3.0 out of 5 stars
Not what you would expect.....
Verified purchase
I was not expecting this satircal, campy spoof when I popped the DVD in the player...for the first few minutes I wasn't sure I wanted to watch...after about 10 minutes I was involuntarily drawn into this fun and silly movie--spoofing many of the vampire traditions, while at the same time creating believable characters about whom we come to care, however reluctantly. I found myself chuckling involuntarily at the one-liners ("Be still, my beating trousers!"), and at the absurd and hilarious plot turn in which some gangsters are recruited to help the German professor nail some vampires in Los Angeles. The gags, while unapologetically blatant and silly, are nonetheless funny. Have you ever seen a vampire brush his teeth, giving particular attention to his fangs? Or, perhaps you have seen a solitious eternally-pregnant vampire, doomed to never give birth, take a new young vampire under her wing, take her shopping and school her in the finer arts of vampirism and glamour? My favorite scene, I must admit, is near the end with the gangsters...I will not spoil the surprise. Keep a lookout, also, for Udo Kier--ever a vampire throughout his movie career--you would have seen him as the head vampire in Blade (1998) and as Count Dracula himself in Andy Warhol's Frankenstien (1974). This is original and funny...don't put it in the player if you are looking for suspense, thrills or horror. Put it in if you need a good laugh.
11 people found this helpful

B. A. JohnsonReviewed in the United States on June 26, 2003
4.0 out of 5 stars
Vampires, Gang Members and Dr. Van Helsing, oh my.
Verified purchase
Somewhere there must have been an axiom written that all vampire movies must be horribly written and acted. This film definitely falls into that category. Never the less, I find this film highly entertaining. Casper Van Dien stars as Dallas, a vampire who appears to be the protagonist. Interestingly, this film seems to portray vampires as both evil and good. (As witnessed by the Count and Dallas, respectively.) All in all the film seems to be more of a good time than any sort of chronicle on vampire lore. This film definitely has the most interesting way of making people into vampires I've ever seen though... If you like vampire movies, you'll enjoy this. If you liked Interview with the Vampire, but hated Queen of the Damned, you probably won't enjoy this (it's more on the Queen of the Damned side of vampire films).
6 people found this helpful
See all reviews
Back to top
Get to Know Us
Make Money with Us
Amazon Payment Products
Let Us Help You
EnglishChoose a language for shopping. United StatesChoose a country/region for shopping.
© 1996-2022, Amazon.com, Inc. or its affiliates