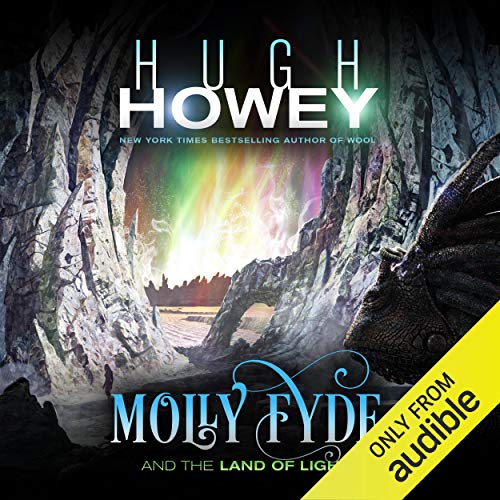 Molly Fyde and the Land of Light: Molly Fyde, Book 2

Hugh Howey (Author, Publisher), Jennifer O'Donnell (Narrator)
4.5 out of 5 stars 303 ratings
See all formats and editions
Sorry, there was a problem loading this page. Try again.

What began for Molly as a simple journey to retrieve her father’s old spaceship has turned into an epic adventure with far-reaching consequences. For years, she dreamed of reconnecting with her past. Now she’s going to meet it in a way she never expected: head-on.

Her father is alive. Her mother’s memories are trapped inside his old ship. She’s on the run from her very own Navy, and now has been tasked with the impossible: Rescue her parents. Save the galaxy. End a war.

Before she can begin, however, Molly must first help a friend in need. One of her crew members is in trouble, a life hanging by a slender thread. There’s only one place to turn: the home world of Humanity’s sworn enemy, the very race Molly and Cole have been trained to meet in battle and have been conditioned to fear and loathe: Planet Drenard, the next stop for the starship Parsona.

4.5 out of 5 stars
4.5 out of 5
303 global ratings
How are ratings calculated?
To calculate the overall star rating and percentage breakdown by star, we don’t use a simple average. Instead, our system considers things like how recent a review is and if the reviewer bought the item on Amazon. It also analyzes reviews to verify trustworthiness.
Top reviews

JJCEO
#1 HALL OF FAMETOP 1000 REVIEWERVINE VOICE
2.0 out of 5 stars Slow moving and it looks more like a young adult love story than Sci-Fi!
Reviewed in the United States on April 28, 2016
Verified Purchase
I love the book Wool and I have read several of the series of stories written by Hugh Howey. Based on this I purchased this series and also the audio books to listen to. I soon found that for me these books were slow moving and frankly boring. I felt like I was reading a book written for a young adult and I could not finish the book after reading 65 %. I actually stopped reading this book and listening to the audio version and I read 5 other books. I never do that. This is one of a handful of books that I could not finish out of the thousands of books that I have read in my lifetime. A rare occurrence for me.

If you are looking for solid Sci-Fi, action and a good story I could not find it in this book and I finally gave up. It is not badly written, it just isn't entertaining for me. Listening to a ship’s computer, that claims to be the young female captain’s mom, lecture her about her love life is just boring. If I hear the comment one more time that someone says, “I can't tell you that, it's a secret,” I will be ill. If you can't tell what is going on then don't waste pages of a book leading up to that statement multiple times!

I love the imagination that many Sci-Fi authors put into their books based on the technologies and theories we have today about the universe. I want the science in my Science Fiction to be real enough that I believe that what they are doing is possible. In this book there were just too many things stated that did not follow science and when I stop reading to think about how silly something written in the book is, I lose interest. Investigate the science, have it proof read by a science teacher, gear up the book to a more adult level and I would have finished it but as it is I set it aside.

If you like solid Sci-Fi then this isn't the book for you unless you are in your young teenager years. 2 stars. Why 2 stars and not 1? It may of interest to some people and it is a well written book but like I said, it is just not interesting for me.
Read more
7 people found this helpful
Helpful
Report abuse

Max Zaoui
5.0 out of 5 stars Word up
Reviewed in the United States on September 9, 2012
Verified Purchase
A few days ago, I found myself starting several free samples I had downloaded on my Kindle reader. Nothing appealed to me. After ten, five or two pages, sometimes even after one paragraph, I inevitably gave up. In the back of my mind, a voice kept telling me: "Why delay it any longer? Why lie to yourself? You know there is still a handful of Hugh Howey books you haven't read yet, so let's go already!". At the same time, I was afraid even that wouldn't work, as I was a little tired, and maybe I had been reading too much too fast over the last few days. Perhaps even Hugh wouldn't pull me out of this torpor.

I shouldn't have doubted either him or the little voice. After two lines of Molly Fyde and the Land of Light, all my problems were solved. It's funny how some authors manage to grip you instantly and take you away from your surroundings. From the introduction, I felt like I was in space with the characters I had already learned to love with The Parsona Rescue. Disbelief completely suspended. I don't care whether some situations aren't realistic on a scientific level, or if the roller coaster pattern of the story might be a little cliché. As a Drenard explains to Cole, in a metaphorical and metafictional way: "Things beginning and ending the same way. The same conflicts with the same resolutions. It keeps going, but not on its own. Each cycle requires work." What matters to me is that it's done right: you care for the characters and you are entertained by the various situations they find themselves into. After reading "Wool" and "I, Zombie", I don't consider the Molly Fyde series as a minor piece of work, though it's clear that it could appeal to younger readers: I actually marvel at the author's versatility.

Amazing how someone able to pull so much poignant grimness in some books can also make you laugh out loud in others. I did just that on more than one occasion with this second episode, for example when Molly speaks Drenard in front of a dumbfounded Cole, or when Edison is facing a Drenard aboard Parsona: "This situation is non-optimal, and the spatial requirements of our combined forms are not adequately met by the dimensional constraints of my room." Which is Glemot talk for something like "I have a bad feeling about this. This town ain't big enough for the both of us." Even more amazing is that even in a tight situation there's comic relief for the reader. It takes some talent to make you go from one emotion to another in a second like that, proving that the rollercoaster mentioned above is actually more than an accumulation of action scenes.

Reaching out, communicating, connecting, breaking the ice: this talent is a matter of life and death for the characters. Lose that, and everything goes to waste, as in Wool or I, Zombie, novels in which characters are either not true to their words or have lost them irremediably. "Any language is just a bunch of pixels", says Cole, but later on, when at a loss for words faced with the beauty of a strange new planet, he's the one to admit: "He needed a label for what he was seeing, as if the word might bottle some of the splendor." Words are the most important factor of the story, and words have more power than laser guns. "Text on a nav screen" can become "the closest thing to a female role model" Molly has ever had. There's a long silent passage in which Molly, Cole and Walter must achieve something on their own, and their isolation can be felt by the reader: it's like you stop breathing for a few chapters. When Molly is given back the ability to communicate with others, her feeling is that "It was like a mute watching someone return with their voice." Reciprocity is mandatory for survival. Feedback. In a society that seems so obsessed with seeing and being seen, Hugh Howey tends to be more about listening and being listened to. At any rate, words are this author's only weapons and he knows how to use them, how to put them together, and that's why we read and love his books. That's why we are so many who feel the need to tell him so publicly on Amazon, because we'd like to give him back a fraction of the thrill he created.. "Just tell me you love me. That's what the words are for. That's what you're feeling." (Molly to Cole)
Read more
One person found this helpful
Helpful
Report abuse
See all reviews

Jhammond
4.0 out of 5 stars FANTASTIC
Reviewed in the United Kingdom on May 3, 2016
Verified Purchase
great read writer has different ideas so makes story more exciting and you don't know which way it will turn very exciting
Read more
Report abuse

K. W. Maeer
5.0 out of 5 stars Five Stars
Reviewed in the United Kingdom on April 12, 2016
Verified Purchase
I recommend everybody should read Hugh Howey, great story telling and fantastic plots. Great for Sci Fi fans.
Read more
Report abuse
See all reviews
Back to top
Get to Know Us
Make Money with Us
Amazon Payment Products
Let Us Help You
EnglishChoose a language for shopping. United StatesChoose a country/region for shopping.
© 1996-2021, Amazon.com, Inc. or its affiliates