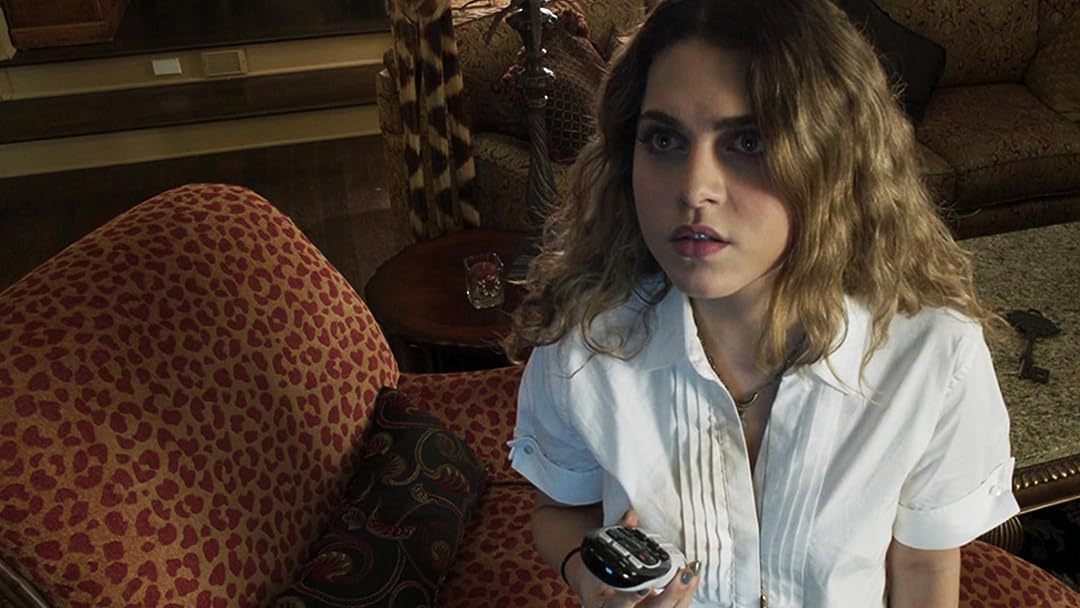 (1,226)
5.51 h 25 min2017X-RayR
A teenage girl and her little brother must survive a wild 24 hours during which a mass hysteria of unknown origins causes parents to turn violently on their own kids.

Fryzilla: King of the MonstersReviewed in the United States on July 5, 2020
4.0 out of 5 stars
Fear Thy Parents
Verified purchase
I...I'm just at awe with this. This is a brutal and dark horror comedy that took me by surprise. Just the idea of parents turning psychotic and murdering their children is just terrifying, and it doesn't help that people have killed their own kids in real life. The acting is fantastic, especially from Nicolas Cage who just goes all out crazy, even during the scenes where he's supposed to be normal he still acts a little unhinged. Like I said before, this movie is brutal with over-the-top kills and violence. It also has some pretty chilling scenes, the most to me are the scenes with people waiting for their kids in the SAT course and the fathers eyeing at the newborn babies at the hospital's nursery like a pack of wolves. Even scenes that you can see coming a mile away are still shocking to watch. I like that they don't give a definitive reason for why parents across the world are going insane and killing their kids, and I like how they have a tv screen or monitor near one of the parents go to static to show them going nuts, or maybe it's some kind of trigger? However, I do have to agree with the other reviewers in saying that the ending is kind of a letdown, in that it just ends with no real resolution. Also the daughter's boyfriend getting knocked out a dozen times is pretty ridiculous. Overall this movie was an absolute rollercoaster ride of intense action, disturbing ideas, and some good laughs.
One person found this helpful

JoeReviewed in the United States on July 17, 2018
5.0 out of 5 stars
Movie was shot on my street.
Verified purchase
This movie was partially shot on my street. My house and car are in several scenes. Not a lot of movies shot in Louisville KY and ever fewer shot on my street. The house they were using is 3 houses from mine. Was fun watching a movie being shot. Never realized how many people are behind the camera. Nick Cage and Selma Blair did come over and do a meet and greet. it was like a big neighbor hood party.

The movie was OK, say 3 out of 5.The plot of the movie was interesting. Considering the subject matter, the movie was a lot less bloody than it could have been. Interesting phycological / horror movie. Not one of Nick Cage's best performance. The director of this movie worked on one of Nick's previous movies. The reason for 5 stars, my house was in the movie of course!

Amy NY1Reviewed in the United States on March 17, 2018
4.0 out of 5 stars
Home Alone with a different concept, funny and stupid .
Verified purchase
I thought this was funny and had a cute twist only this was really a twisted story . It may give younger kids bad dreams , so I don't know if I could call this a family movie lol. As funny as it was , the what if this could actually happen factor plays on your mind . And I say that with all the chemicals that we know are used to fight wars and bring a society to it's knees. Imagine that it could happen bringing the parental population to self destruct and kill. By exposing them to some kind of gas or radio frequency that makes the parents snap out and try or do kill their kids .What better way to bring the family unit down. Of course the casts acting was very good .The kids won this battle in the end and it is like Home Alone with a different concept .
7 people found this helpful

Schroeder (Cult Movies Magazine)Reviewed in the United States on October 16, 2018
1.0 out of 5 stars
Movie has NO ENDING (movie cuts off), no kidding. I wanted to like this movie, HUGE disappointment
Verified purchase
HATE THE ENDING, oh wait, there is no ending ! What the hell was the director thinking. I truly wanted to like this movie and it just never takes off. Does not explain itself, does not give any kind of origin why the parents are killing their children. Assumption, signals sent through TV force parents to kill their kids. This is something that could have been great but was not executed well at all. Someone needs to re-make this movie who understands what horror/gore fans like. Another movie tossed into the trash, HUGE disappointment.
5 people found this helpful

skellimaeReviewed in the United States on January 22, 2020
2.0 out of 5 stars
Very strange... and not in a good way
Verified purchase
I’m a huge horror movie fan and watching the previews for this I thought it was going to be awesome and a good entry into the horror genre! Honestly I’m not sure what this was... unfortunately I bought it on Bluray here and opened it so I’m stuck with it, but this movie was seriously all over the place, and I’m not even sure I’d classify it as a horror movie to be honest. They don’t give you any explanation for why things are happening the way they are, and the things that bugged me the most about this movie is the ending... it literally cuts right off and goes to credits and left me and my boyfriend going WTF. Bad way to finish a film... just strange. Best part of this film hands down was the grandparents, and that’s the only thing keeping it from being one star! Otherwise this is one messy, thrown together, poorly acted film.

Garrett M.Reviewed in the United States on December 31, 2018
1.0 out of 5 stars
Came here looking for a terrible Nicholas Cage movie
Verified purchase
I wanted to find something that was so bad, it was funny (think Troll 2, Weatherman, Knowing, etc.). This movie was more along the lines of Dog Eat Dog, which had a lot of graphic, senseless violence and major plot holes, and not enough goofy, cheesy dialogue or characteristic Nic Cage freakout moments. Probably wouldn’t watch it again. Due to the sheer volume of Nic Cage movies out there, there is really no reason to watch this one. I would have rather watched Wickerman again, which is one of his best of this genre
3 people found this helpful

Eddie R. GarciaReviewed in the United States on June 24, 2018
4.0 out of 5 stars
Pretty good!
Verified purchase
I knew I would enjoy this from the start when the retro credits started. I would put this up there with "Cooties", except here is adults killing kids versus kids killing adults. Had some very wyd moments and both Cage and Blair were fun to watch. Oh and Lance Henriksen's cameo was awesome!
5 people found this helpful
See all reviews
Back to top
Get to Know Us
Make Money with Us
Amazon Payment Products
Let Us Help You
EnglishChoose a language for shopping. United StatesChoose a country/region for shopping.
© 1996-2021, Amazon.com, Inc. or its affiliates