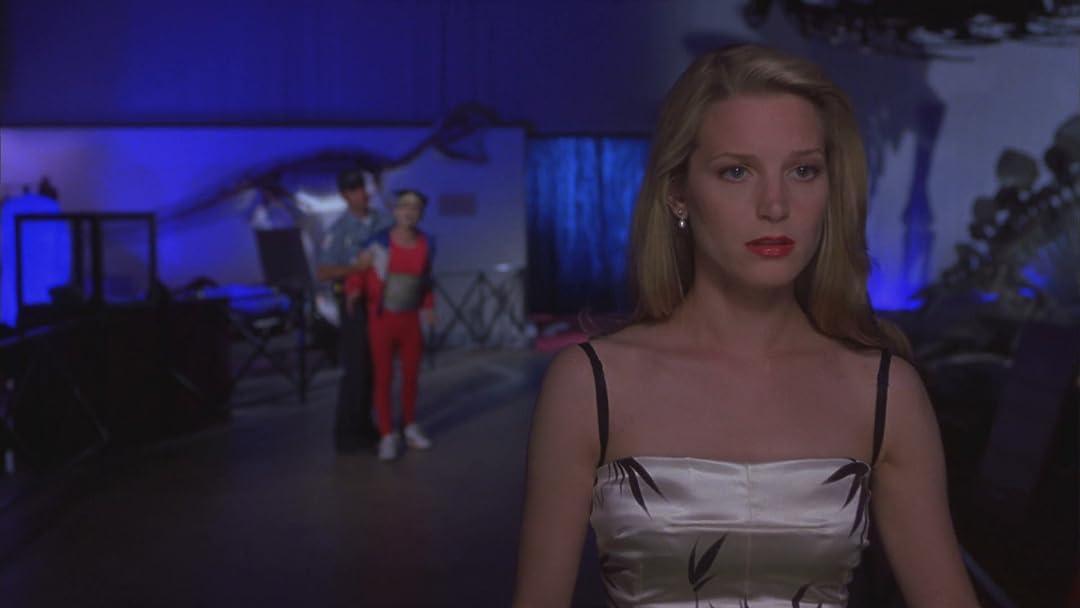 Del KeyesReviewed in the United States on July 11, 2010
3.0 out of 5 stars
Crass monkey, that freakin' monkey
Verified purchase
Well, after my "Country Bears" review, it was only a matter of time before I come across a monkey movie. And yet miraculously, this is the better film.

"Monkeybone" can give most children nightmares, pretty much what [[ASIN:B0000AUHQC "Cool World"]] did for me. But unlike Ralph Bakshi's unmerited trash, I sorta enjoyed this movie as well as admit to its disturbing atmosphere. Director Henry Selick has always been the go-to guy for scary designs based on a [[ASIN:B001AIRUOU couple of]] [[ASIN:B003L4Y5BW films]] he made, which is why he's Tim Burton's no.2 on his buddy list. His stop-motion works always appear so grim and yet so fascinating, filled with creative nuances in how the set pieces move. Therefore, I really like the visual treatment this live-action/stop-motion combo is going for.

It's about a cartoonist named Stu (Brendon Fraser) who successfully pitched a cartoon series based on his creation, Monkeybone. He was about to pitch to his scientific girlfriend (Bridget Fonda), until he somehow got into a coma from an inflatable animal-related car accident. His soul went into a purgatory-like place, Downtown. It's a vulgar, perverse surreal world he's in, and many frightening stop-motion animations cross his path; on the upside, it had Rose McGowan as cleavage-tastic catgirl. He meets his cancerous, unlikable imaginary simian, Monkeybone, and the two tried to escape from this world, but it was trick by Monkeybone who instead stole his body. Stu has to rely on the unlike force of Whoopi Goldberg as Death to get his body back and to stop a sinster plot to produce more nightmares from the living, because his girlfriend happened to make chemical compound called 'nightmare fuel' (which acts more like the toxin The Scarecrow used).

As interesting as the story is, it's not much to rave about. The director seems to be weak in the real world scenes, because they're not as fun as Downtown and the Monkeybone-possessed Stu's antics are more primal than clever. If there's one scene in the real world that I enjoyed, it's the part where Stu possessed a dead gymnast (Chris Kattan) and is being chased by doctors wanting his organs, probably because Bob Odenkirk was one of the doctors; normally, I would get annoyed wondering why the doctors are chasing a corpse without wondering why it's even alive, but since Bob and Chris delivered a good set of laughs, I let it slide. "Monkeybone" was fun by its artistic merits, because it sure isn't for Brendan's dull attempt at playing two characters, the title character's wisecracks, and people simply monkeying around.

Scooter mckickflipReviewed in the United States on August 15, 2021
5.0 out of 5 stars
Weird and wonderful
Verified purchase
Perfect cast, Chris kattan, Whoopi Goldberg, Thomas haden church, Rose McGowan, Brendan Fraser... all In what seems out of their element, absolutely killing it. Everyone's role feels brief, but this fever dream of a movie does not disappoint. Bad guy, good guy, romance, drama, comedy... It has it all.

Dennis RReviewed in the United States on August 14, 2001
3.0 out of 5 stars
Delightfully weird after the first ten minutes...
Verified purchase
I almost returned this movie after the first ten minutes. The cartoon at the beginning is really stupid, and they left out the part (shown in the deleted scenes) that actually contributed to the plot. They also left out part of a car accident scene, which in its entirety, made infinitely more sense. Whoever was responsible for the final editing did a woefully inadequate job.
But once you get past that, the movie gets pretty good. It's a wicked roller coaster ride of a movie and manages to be rather suspenseful. Fraser does an excellent job and makes it as good as it is, and good performances are turned in as well by Fonda and Kattan (the best movie I've seen Chris Kattan in, and the only one in which he's actually funny).
In addition to general Twilight Zone-ish weirdness, there are some great comedic scenes and even a touching scene here and there.
All in all, I'd rate it worth renting or watching on cable, but probably not worth buying unless you're a fan of one of the actors or you've seen it and for some reason just plain disagree with me.
6 people found this helpful

NORMAN L. JOHANSENReviewed in the United States on September 18, 2018
2.0 out of 5 stars
WASN'T FUNNY
Verified purchase
Okay, I admit that the first time I saw this movie was at a party where, after a lot of drinking and smoking, someone turned off the music and invited everyone around the TV to watch this. At that time, I remember this being hilarious in it's weird way. Well, that memory quickly faded after getting this DVD. I admit that the stop motion animation within the "downtown" scenes is very unique. BUT, overall, I didn't find the humor to be what I remembered.

AshlynnReviewed in the United States on March 26, 2021
5.0 out of 5 stars
Not for kids.
Verified purchase
This movie gives me childhood nostalgia. I remember loving this movie as a kid, but as an adult I did not realize how inappropriate it is for kids. Oh well! I did enjoy watching again as an adult just because it is such a different movie.

Pamela KaatzReviewed in the United States on September 13, 2018
5.0 out of 5 stars
My favorite Brandon Fraser movies.
Verified purchase
Monkeybones and Bedazzled are my favorites of his films because they both show his great acting ability. At first they are super-ridiculous comedies, but in the end they both have in interesting what I would call a "life message." Maybe hard for some to see. I love how the guy in the comma is trying to wake up before his sister has the doctors turn off life support. And in Bedazzled how we need to be careful what we wish for and learn to overcome disappointments. But I'll admit you DO have to look hard.
3 people found this helpful

Elizabeth Ann GlennReviewed in the United States on March 12, 2013
4.0 out of 5 stars
Monkeybone
Verified purchase
Purchased this movie for my teenage daughter. We had rented this movie years ago and she fell in love but it's now hard to find. It's an older movie and contains "sick" humor but I was grateful to find it on Amazon so she can share it with her friends whenever they are looking for a laugh. Very funny if you like disgusting, sick humor. This also contains a sexual overtone which is probably apparent to most from the name, however, was lost on me the first time I rented it. While parts of this movie are animated, it is NOT a kids movie; teenagers and up!
One person found this helpful

Todd M. RohsReviewed in the United States on October 4, 2001
2.0 out of 5 stars
Not the MOST painful movie I've ever watched
Verified purchase
I like Brendan Frasier movies, most people won't admit that, but I think he is pretty funny. Monkeybone (movie and the character) were not funny at all. I'm also a big fan of Henry Selick's, but this looked like a collection of characters rejected from 'Nightmare Before Christmas' and 'James and the Giant Peach'.
The other reviews give you plot summary, so I won't repeat it here. And it actually sounds like a pretty interesting storyline, don't believe it. The saving grace of this movie was the performance by Chris Kattan. I'm not a huge fan, but Kattan was truly entertaining. My advice, stay away from this one. It tried to be weird and interesting, but was just plain dull.
3 people found this helpful
See all reviews
Back to top
Get to Know Us
Make Money with Us
Amazon Payment Products
Let Us Help You
EnglishChoose a language for shopping. United StatesChoose a country/region for shopping.
© 1996-2022, Amazon.com, Inc. or its affiliates