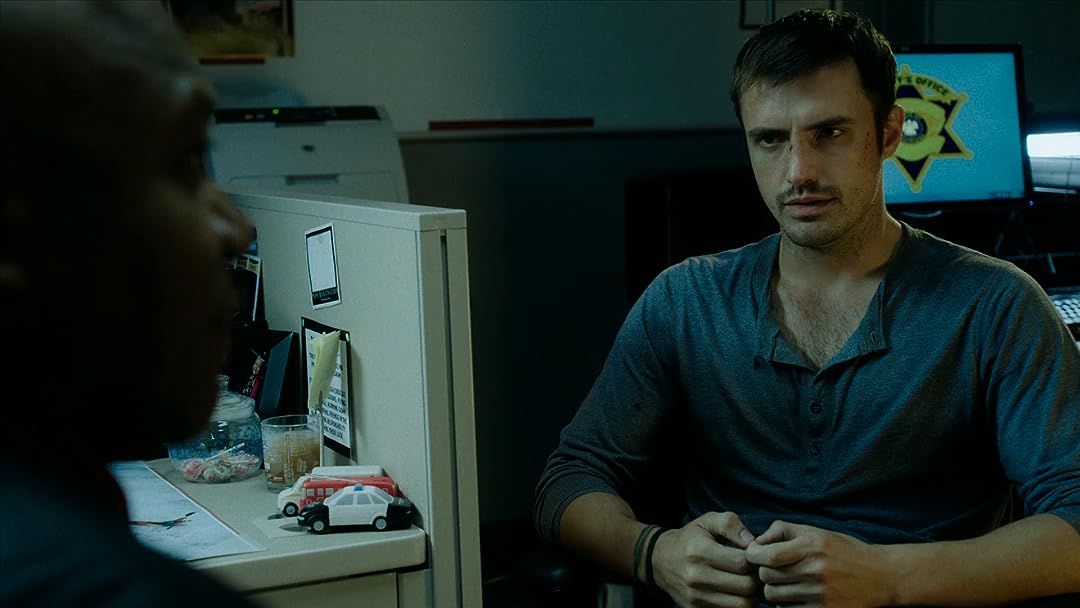 (157)
1 h 28 min2013X-Ray16+
Jake is given a mystical monkey's paw that grants three wishes, but things go terribly wrong when he brings his friend back from the dead.

Tim F. MartinReviewed in the United States on September 1, 2021
3.0 out of 5 stars
Decent, not the greatest, love the New Orleans setting though
Verified purchase
The Monkey’s Paw (2013), an American horror film based on the 1902 short story of the same name by W.W. Jacobs. The movie centers on the trials and tribulations of Jake Tilton (played by C. J. Thomason) who acquires the monkey’s paw and proceeds to ruin his life and the lives of just about everyone around him (if they even survive), with each wish leading to more and more awful things (the monkey’s paw can grant the owner three wishes, though as the story and the movie show, the wishes technically come true but in the worst possible ways). The first wish leads to the death of his best friend and coworker Tony Cobb (played by Stephen Lang), with Jake using a wish to bring him back from the dead. Cobb comes back, but he is a murderous psychopath and is an enormous danger to absolutely everyone in Jake’s life as he seeks to get the monkey’s paw from Jake.

I liked the New Orleans setting, as the movie was filmed on location in New Orleans and that added a really nice touch to the movie. The cast in general wasn’t bad and I liked the character of Detective Margolis (played by Charles S. Dutton). Productions values were good. The main character was well cast and relatable and Stephen Lang played a great evil crazy person with just a streak of something pitiable about him.

Overall though I wasn’t a huge fan. Pacing could be a little slow at times. It felt like a lot of filler in the movie, with Cobb just doing evil things that had no real reason to happen and some of his evil just random and even confusing. Late in the film he gets a mask, some sort of Mardi Gras mask, it looks like that is going to become His Thing, but then he wears it just a short while as this happens so very late in the movie and even then, abandons it before the end. Apparently, Cobb came back from the dead soulless but this wasn’t especially well established in the movie to me until the very end. There was one secondary character named Catfish (played by Corbin Bleu) who was going for some sort of Creole accent. It was so thick and fast I had to turn on subtitles. I checked, he was born in Brooklyn and according to Wikipedia, isn’t from Louisiana, so it is weird it was such a thick at times to me accent.

Not a bad movie. Serviceable. I don’t regret seeing it.

Geoffrey F. ArnoldReviewed in the United States on April 27, 2021
5.0 out of 5 stars
Nice little story...
Verified purchase
This film delivers on all fronts. Even the acting is good.

The premise, that a monkey's paw gives you three wishes, is the basis of this film.

But, as the saying goes: Be careful what you wish for.

And that is the underlying story here, in that old saying.

And it goes wrong in a delightful way as our stalwart hero goes about reaping what he wished.

The language was surprisingly tame, which is a major bonus. The foul language was kept to a more than acceptable minimum. So the writers of the dialogue relied upon actual dialogue rather than those words peppering everything.

Charles Dutton puts in an appearance here. He is a great actor. His role is actually minimal, but he does with it what he can and well, he, too, pays the price.

The gore factor was kept down, too, and used in the final moments a bit more liberally. But, again, overall, the gore wasn't a festival of special effects people showing you how good they are. It was more low key, also a good factor here.

The pacing of the film was well done, too. The editing was really good. A film can live or die by the editing. I've seen a lot of what should have been good films destroyed by poor editing skills. This film does not suffer from that for the most part.

This is a kind of Stephen King-esque story, so you would find it enjoyable if you're a Stephen King fan.
3 people found this helpful

lisalisaReviewed in the United States on May 23, 2020
3.0 out of 5 stars
3 Stars for Stephen Lang
Verified purchase
The original short story, "The Monkey's Paw" is a great classic horror premise. We've seen it revisited in movies like "Pet Semetary" because there is that scary aspect of human nature that sometimes makes us willing to get what we (think we) want at any cost. This movie could have done a lot more with this idea. Stephen Lang is always great but the rest of this film is pretty Blah. Not particularly scary or suspenseful, fairly predictable. The actor who plays the main character is devoid of emotional range. It had my bored mind wandering in speculation how he got the role when there are tons of good-looking guys (he IS good looking, I give him that) out there that can actually act.
7 people found this helpful

Margie M DavisReviewed in the United States on October 19, 2021
4.0 out of 5 stars
Great Adaptation of a 9th Grade Literature Textbook Classic
Verified purchase
As an English teacher (among other subjects for 38 years), one consistent favorite short story in the Freshman English Literature textbook was "The Monkey's Paw". This adaptation does it justice, even telling a bit of the original story -- wishing for the mortgage to be paid off and then the son dies accidentally and his company brings the consolation money, the exact amount of the mortgage. Then the mother wishes her son back alive and that's where the true horror begins. Stephen Lang (Cobb) does a fantastic job being brought back to life, without his soul. Pretty dang horrible. I had to hide my eyes a little. All in all, a great adaptation. Go read the original short story. Bet it can be found free in Amazon Books, or find a 9th grade lit book. It's in there!
2 people found this helpful

WALTReviewed in the United States on September 10, 2021
5.0 out of 5 stars
A TERRIFIC THRILLER FROM THE BOOK
Verified purchase
THIS MOVIE WAS VERY SCARY. AS A MAN CAUSES A CAR ACCIDENT, HE IS TOLD BY THE DYING MAN THAT THE MONKEY’S PAW HE POSSESSES WILL GRANT THREE WISHES. AS HE USES THESE WISHES, HE IS TOLD HE WILL RECEIVE THEM ALL BUT NOT NECESSARILY IN WHICH THE MANNER HE HOPES FOR. AS THE POLICE BECOME INVOLVED, THE GREAT ACTOR CHARLES S. DUTTON PLAYS THE DETECTIVE
BUT BEGINS TO REALIZE THE TRUTH. AS THE WISHES ARE GRANTED, HEINOUS EVENTS HAPPEN. THE DENOUEMENT, I.E. UNRAVELING OCCURS WHEN THE POSSESSOR OF THE PAW TRIES TO BRING BACK THE DYING MAN. BIG MISTAKE. WATCH THE CONCLUSION CAREFULLY , IT IS TERRIFIC. ENJOY.
One person found this helpful

RkalReviewed in the United States on May 16, 2021
1.0 out of 5 stars
Huge Disappointment
Verified purchase
I was expecting a remake of the classic tale, but instead what I got was a monumental waste of my time. Im not sure why I stuck it out throughout the movie. Maybe I was hoping for some redeemable moment, which never happened. I would not recommend this at all, least of all ta fellow lover of the original wonderfully scary story.
My advise is to keep searching for another movie and skip this one altogether.
One person found this helpful

BoomShakaLackaReviewed in the United States on August 28, 2021
1.0 out of 5 stars
Should not have been made
Verified purchase
Someone said "Hey, I have some money, let's make a movie for the hell of it." This is utter crapola. I watched the first 70% of it and couldn't watch the very ending because this was so terrible. Horrible script, cliche characters, sloppy writing, lazy lighting, film student camera work and quiet sound. This is absolute junk.
One person found this helpful

Amazon CustomerReviewed in the United States on May 24, 2020
4.0 out of 5 stars
Good Low Budget Horror
Verified purchase
This was a good low budget horror movie. The Louisiana accents could use some work. But basically the guy is given a monkey's paw and has 3 wishes. He uses his 1st wish for a car, his second wish to bring back a dead friend, and that's where things turn interesting. You will need to watch to find out about the 3rd wish. Pretty good. Worth a watch during the quarantine.
2 people found this helpful
See all reviews
Back to top
Get to Know Us
Make Money with Us
Amazon Payment Products
Let Us Help You
EnglishChoose a language for shopping. United StatesChoose a country/region for shopping.
© 1996-2022, Amazon.com, Inc. or its affiliates