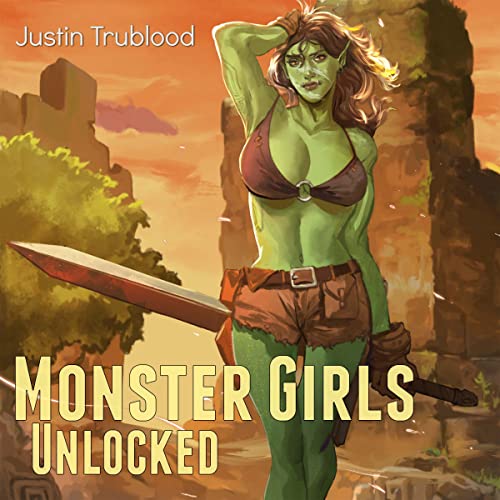 Justin Trimble's fantasies come to life when a couple of sexy, middle-aged professors give his virtual world a try and are transformed both in-game and out.

As an AI researcher, Justin Trimble already has access to some of the most advanced technology on the planet. On his nights and weekends, he explores the capabilities of the virtual systems to invent an immersive game. To make the game more appealing, he modifies the immersion rigs to stimulate pleasure as reward for achievements. Coupling that with game mechanics that allow players to share intimate moments and he's got a recipe for gameplay that's exciting on many levels.

What Justin doesn't know, however, is that in modifying the rigs, some of the changes he's put into the game follow players back to the real world. These changes aren't that big of a deal until one night, his thesis advisor, a woman who he's secretly fantasized about for years, decides to join him in game. Against advice, she chooses to play a half-orc, a race that has few inhibition's about sexual expression.

A word of warning: This story will get your heart pounding with unconventional relationships and detailed descriptions intimate relationships both in-game and out. If you don't like that kind of thing, don't listen to this audiobook.

Cori W
5.0 out of 5 stars Undersold Overdelivered
Reviewed in the United States on September 16, 2021
Verified Purchase
You know when you see a trailer for a movie and it’s looks ok, so you don’t go see it in the theater. Then it streams on tv and you see it for free, 2 hours fly by and you’re screaming to nobody how absolutely amazing that movie was and you’re like how in the world did this not do a ton in the theater and then you finally remember that mediocre trailer. This is that in book form, the synopsis is ok, cover art is fantastic, but the book - pure amazement, fantastic characters, straight up brilliant plot and the relationships are where it shines so bright! I love love love all the smart sexy powerful ladies, but I absolutely could not get enough of the MC showing them there worth in every way imaginable.

Justin you’re heading to my follow list, this was a few of my favorite authors wrapped in a Christmas paper! And that’s with the characters not actually in the game most of the time. I’m volunteering to read your next book early so I can help beef up that synopsis, this should already have 100+ reviews easy.
Read more
18 people found this helpful
Helpful
Report abuse

N Pierce
5.0 out of 5 stars This is so damn good.
Reviewed in the United States on September 16, 2021
Verified Purchase
The first thing that I noticed about this book was the prose. Like, a few mins in, I already liked the writing.
Then the story. The author makes you feel like you're going down a well trod path, to emerge in a LitRPG game world. I personally don't like when the action in VR is the main bit of the story because it's just someone playing a game. That being said, I started to get a little disappointed because of my own assumptions of how it would play out. Boy, was I wrong. This plot is extremely clever and well thought out. It requires some suspension of belief, but so does every book. I mean, damn I loved the story.
Ok last bit. This book is also full of kinky sex. Like really fun kinky sex. Where most authors stop themselves from including quite so much, Justin fearlessly charges ahead. Nothing gross or wierd, but all thoroughly enjoyable. I often skim over explicit scenes to get back to the story, but it fit really well here. So yeah, read the book, it's good.
Read more
Helpful
Report abuse

Aaron Clemons
5.0 out of 5 stars Didn’t want it to end!
Reviewed in the United States on September 16, 2021
Verified Purchase
Incredible journey! Was an amazing story from start to finish. The MC progresses beautifully as a character, he is believable down to earth nerd. The side characters are quite tantalizing and fully support the story and growth overall. I loved the slice of life and day to day grind that went on. In conclusion the tale was fantastic and I have no idea where it will go there are many threads and possibilities. I only wish more time spent in game possibly crafting or town building! I understand the game world is in it “A” stage but I just can’t wait for more!
Read more
Helpful
Report abuse

A. Smallwood
5.0 out of 5 stars really good
Reviewed in the United States on April 2, 2022
Verified Purchase
I really enjoyed this book. Great characters and storyline. I love a book with an intelligent main character. Usually this genre has a brain dead ex soldier or convict. All the female characters were intelligent and interesting. Not just there for the main character to sleep with. Please more.
Read more
Helpful
Report abuse

Robert
5.0 out of 5 stars What a great read
Reviewed in the United States on October 8, 2021
Verified Purchase
Saw the premise and thought I would give the book a chance and am really glad that I did. Excellent read with a lot of excellent adult content with a great story premise. Really hope to get a book 2 on this series because I would like to see where the story goes from here.
Read more
Helpful
Report abuse

Samson
5.0 out of 5 stars Pretty Wild Ride
Reviewed in the United States on November 25, 2021
Verified Purchase
This story was very entertaining. It had some science, a little D&D, some political intrigue, a lot of interesting sex. As noted there were a few editing issues but nothing too distracting. If there is a second book I will definitely read it.
Read more
Helpful
Report abuse

Kindle Customersvigl
5.0 out of 5 stars Enjoyable
Reviewed in the United States on November 25, 2021
Verified Purchase
I was caught up in the story from the beginning and sad that I got to the end of the book. Readers will like the fact that there isn’t misspelled words or confusing sentences.
I’m looking forward to seeing the next book if there’s one.
Read more
Helpful
Report abuse

Makr Kram
5.0 out of 5 stars Jace has a mace
Reviewed in the United States on May 25, 2022
Verified Purchase
I thought this would be a sci if dungeon run but it turned into a full on sex romp with some gorgeous ladies. I hope there are more adventures on the way.
Read more
Helpful
Report abuse
See all reviews

Lunasmeow
3.0 out of 5 stars Decent story, bogged down by woke-ism.
Reviewed in the United Kingdom on November 12, 2021
Verified Purchase
Seriously, the story is about a fantasy world, one based off of D&D... and the comments keep coming about "racially insensitive" drow and such.

Which isn't even accurate. Original Dark elves were just "brown skinned". The evil drew are the "Dark" ones. Black eleven exist. It's not racist, and this isn't the place for that trash anyway. Stick to the story, keep your nonsense racism whining out of it.

Christian Brausen
5.0 out of 5 stars Lured in by sex stayed for the story
Reviewed in the United Kingdom on October 4, 2021
Verified Purchase
Great story I thoroughly enjoyed reading. This book had a good balance of sex and story. The sex always followed the story not the other way round!
A lot of sex heavy book don't follow the story and I find them a pain to read as they devolve into a repetitive strain on injury.
This book found the right balance and I am looking forward to the next book.
Read more
One person found this helpful
Report abuse

Tau Breaker
5.0 out of 5 stars Awesome
Reviewed in the United Kingdom on September 22, 2021
Verified Purchase
Really great, well written, book with a very interesting premise. I will be following this author and series as I really enjoyed this book.
Read more
One person found this helpful
Report abuse

mistermorty
5.0 out of 5 stars Great stuff
Reviewed in the United Kingdom on September 27, 2021
Verified Purchase
I really enjoyed romping along with this yarn and I look forward to to seeing how this all developes, please write more
Read more
One person found this helpful
Report abuse