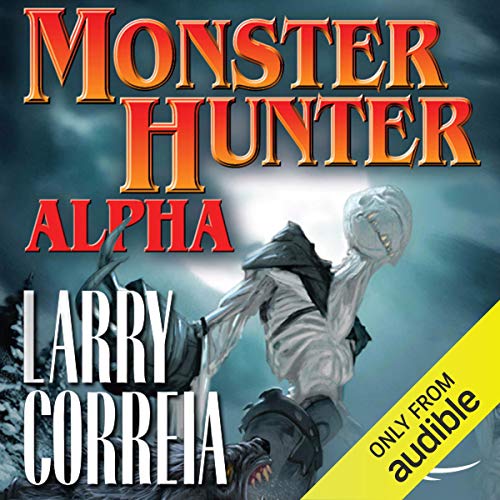 Earl Harbinger may be the leader of Monster Hunter International, but he's also got a secret. Nearly a century ago, Earl was cursed to be a werewolf. When Earl receives word that one of his oldest foes, a legendarily vicious werewolf that worked for the KGB, has mysteriously appeared in the remote woods of Michigan, he decides to take care of some unfinished business. But another force is working to bring about the creation of a whole new species of werewolf. When darkness falls, the final hunt begins, and the only thing standing in their way is a handful of locals, a lot of firepower, and Earl Harbinger's stubborn refusal to roll over and play dead.

Your audiobook is waiting!
Learn more about membership
List Price: $24.95
You Save: $2.96 (12%)
By completing your purchase, you agree to Audible’s Conditions Of Use
Sold and delivered by Audible, an Amazon company
Share

J. Sexton
5.0 out of 5 stars Loved this one!
Reviewed in the United States 🇺🇸 on July 10, 2022
Verified Purchase
Yes, I needed to read this. Who can resist reading an urban fantasy with a company, Monster Hunters International, dedicated to keeping humanity safe from monsters? After all, “Evil looms. Cowboy up. Kill it. Get paid.” is the mission statement from the MHI Company Handbook.

A bonus is that the lead in this book is the founder of the company. How he overcame his inner beast is explained in this novel. It was totally unexpected, as was the explanation of werewolf society. And this “situation” will challenge our hero to respond above and beyond to keep humanity safe.

I loved this book and its hero. If you like urban fantasy that includes the dark side that must be kept in check, this book is a good one.
Read more
Helpful
Report abuse

Amazon Customer
5.0 out of 5 stars Good
Reviewed in the United States 🇺🇸 on September 1, 2022
Verified Purchase
This book itself is damn good. Beyond the series, this book sticks out. It's a good read by itself. Well done.
Read more
Helpful
Report abuse

Nickolas X. P. Sharps
4.0 out of 5 stars Top Dog
Reviewed in the United States 🇺🇸 on August 31, 2011
Verified Purchase
Larry Correia's Monster Hunter series is a breath of fresh air in the stagnating genre that is urban fantasy. When a reader picks up a book by Correia he can expect several things. He can expect humor, deep characters, tight plotting, and intense action sequences. Correia's books can be considered B-movie pulp but the truth is that they are so much more intelligent and intricate than the monster movies of yesteryear. Monster Hunter Alpha propels the over-arcing plot of the series while managing to shed light on a fan favorite character.

Have you seen the movie 30 Days of Night? Then the premise of MHA will seem familiar on a very basic level. But then of course you have to take away the vampires and add werewolves. And then make the main character a several hundred year old werewolf himself, who is also a war vet and seasoned monster hunter. Now throw in a ruthless agent of a federal monster control bureau and a team of rival monster hunters. Add an ancient magical talisman, not one but two dastardly villains, and plenty of firepower and you have Monster Hunter Alpha.

Whereas the first two Monster Hunter books are told from the first person perspective of Owen Zastava Pitt, MHA is split into multiple third-person POV's. The main perspective is, of course, Earl Harbinger's. If you're not yet associated with the series Earl can best be described as a one-werewolf army. Other characters include the town sheriff, a federal agent, an ex-KGB werewolf, and an MHI drop out turned entrepreneur. To be honest, I had trouble getting into this book at first. The POV switching at the beginning of a book got to be a bit much, with the perspective shifting a little too quickly for my taste. Once the stage is set for the confrontation however, Correia gets control of the POV's and the book becomes completely absorbing.

The plot of MHA is true Correia till the end. There are unexpected twists and the stakes are always high. My one complaint concerning the plot is that the big villain reveal lacks a bit of a punch but this was easy enough to look past. The moments that really shine are the bits where MHA is connected to the over-arcing plot of the series. Though the stakes for the individual Monster Hunter books are big, you can tell that Correia is building up to a truly epic finale down the road. Other parts about the novel that I really enjoyed were Earl's journal entries at the beginning of each chapter. These entries really help to flesh out everyone's favorite werewolf. I do wish that Correia had included more descriptions of Earl's time in Vietnam.

Now to the action. Look, it's Larry Correia. If you've read anything by Correia you know what an endorsement that is. They should make a Correia Certified label to throw on books where the action exceeds Hollywood blockbuster budget levels. If you haven't read anything by Correia let me put it this way. There is shooting. There are explosions. There is a giant snowblower used for some super creative werewolf killing. There are shotguns and submachine guns and even a recoilless rifle. Oh yeah. And then there are the close quarters werewolf on werewolf, claw rending fight scenes. It's brutal. And beautiful. No one writes action like Correia.

I had a few complaint about MHA, but nothing that would keep me from buying the book again if my copy went mysteriously missing. Shoot, I'd probably buy it a third or fourth time if my friends continued failing to return it. I do not recommend this book for the feint of heart. I also do not recommend this book as a starting point. Don't be cheap. Go buy Monster Hunter International and Vendetta first. You won't regret it.
Read more
5 people found this helpful
Helpful
Report abuse

David G. Kantrowitz
5.0 out of 5 stars It Makes Twilight Werewolves Look Like Chihuahuas
Reviewed in the United States 🇺🇸 on September 26, 2012
Verified Purchase
In a world where lycanthropy is a horrific and permanent curse, only one man has ever tamed the tvar, or beast within. Throughout the ages, sympathetic humans have sought to help those unwillingly stricken with this curse, to reach some sort of equilibrium between the man and the monster. Only one, with the sacrifice of a dedicated few, has achieved it. His name is Earl Harbinger.

Over a hundred years old thanks to his curse, Harbinger has obtained that balance. It is not without its disadvantages; indeed, with every full moon, he is forced to lock himself inside a sturdy steel cage until his transformation has passed. Fortunately for the rest of humanity, at other times he can control his transformation, and use it to fight the various forms of evil that plague our planet. Even in human form he is virtually indestructible, reliant only on a finite supply of body energy to help him regenerate. Of course, wearing a minotaur hide jacket helps. However, the hum of the moon follows him constantly.

Harbinger comes from a long line of monster hunters. His curse is his boon when it comes to his profession. In a small town in the upper peninsula of Michigan, during a fierce and relentless blizzard, he faces his greatest challenge, a foe that seeks to not only redefine centuries of lycanthropy, but also to destroy the world as we know it. Buried within this battle are mysteries that trace back to the dark beginning of lycanthropy, and the perverse and twisted magic of the Old Ones themselves. Teamed only with a young police officer, wayward freelance monster hunters, and a group of haggard townsfolk, Harbinger must find a way to stop a foe with decades of a head start on him. He will not only guide them through the struggle, but face the most basic question of what it means to be human.

Monster Hunter Alpha is the third book in mega-author Larry Correia's series, but it is meant to be accessible to first-time readers. In this he succeeds greatly, and new readers should not be discouraged from picking it up independently from the others. With a taut narrative, excellent character development, and an eminently likable, tough-as-nails protagonist, this is a novel not to be missed. True to the series, there is no shortage of action, described in vivid and expert detail, involving not only the most epic of werewolf fights imaginable, but also firefights against scores of nasty lesser monsters, including some rather imaginative improvised weapons.

As I'm currently reading Monster Hunter Legion, the fourth in the series, I would hesitate to say that Alpha is the best. However, it does stand alone very well, and should be of interest to any reader who thinks that Twilight werewolves are better off gracing the mantels of hunting lodges.
Read more
Helpful
Report abuse
See all reviews

High toned sob
5.0 out of 5 stars Great
Reviewed in the United Kingdom 🇬🇧 on June 16, 2020
Verified Purchase
Brilliant third outing I think the best so far . I'm really looking forward to book four I'm sure it will be equally as good.
Read more
Report abuse

The Pantsman
5.0 out of 5 stars Five Stars
Reviewed in the United Kingdom 🇬🇧 on July 14, 2018
Verified Purchase
Read my review on goodreads!
Read more
One person found this helpful
Report abuse

Lee
5.0 out of 5 stars Another great story
Reviewed in the United Kingdom 🇬🇧 on January 25, 2017
Verified Purchase
I have now read the first 3 novels in 3 weeks, amazing books with great action. On to the fourth now!
Read more
Report abuse

JON
5.0 out of 5 stars Excellent 3rd book in series
Reviewed in the United Kingdom 🇬🇧 on October 9, 2013
Verified Purchase
I enjoy the humour and style of Larry Correia's stories. The MHI stories are great light reads. His Grimnoir stories are excellent too.
Read more
2 people found this helpful
Report abuse

Dave de prave
5.0 out of 5 stars Werewolf super cop vs the forces of darkness
Reviewed in the United Kingdom 🇬🇧 on August 5, 2019
Verified Purchase
Lovely book- first in a series (which I intend to buy on the strength of this) Elements of Hellboy, Lovecraft, and B horror movies with lots of fun laden action.
Read more
Report abuse
See all reviews