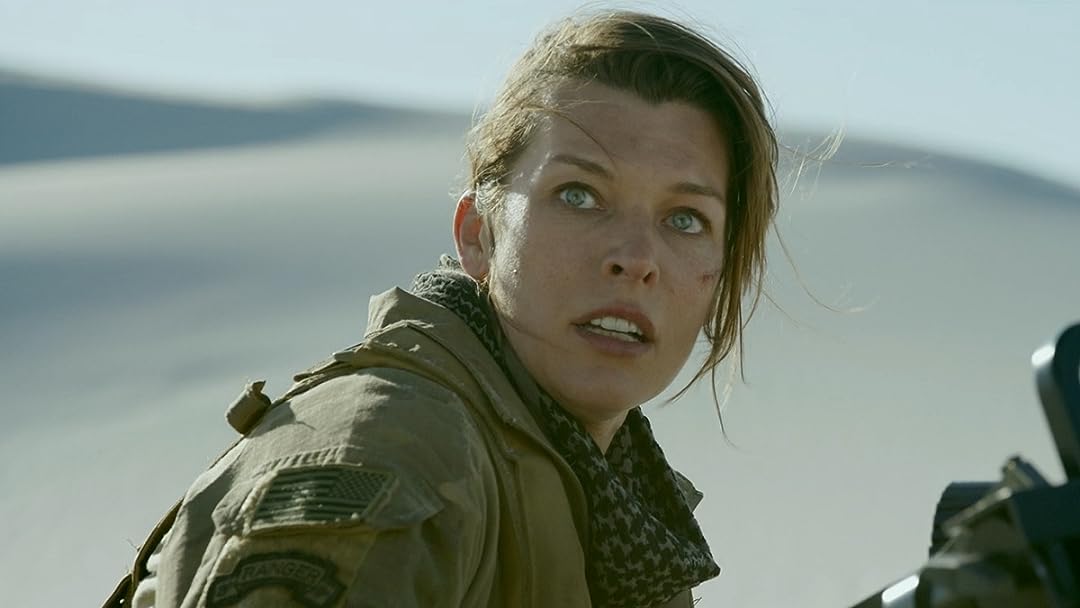 (44,841)5.31 h 43 min2020X-RayPG-13
When an unexpected sandstorm transports soldiers to a new world, they discover an unknown habitat with monsters immune to their firepower.

Amazon CustomerReviewed in the United States on December 27, 2020
1.0 out of 5 stars
Tired of Prime's B.S
This is Bull. They sell you something without honoring the release date. Why do I buy a movie I can't watch. Man I am tired of Prime's B.S. Its always deceiving over petty crap. I will get my movies from Vudu now.
306 people found this helpful

Amazon CustomerReviewed in the United States on February 20, 2021
5.0 out of 5 stars
Bad reviews mean no more money spent on video game adaptations, hence b-rate movies
Verified purchase
I think it's important to note to "gamers" that dislike the discontinuity and accuracy between games and movies, or that are upset with the timeline of release, that bad reviews, and refusal to watch a movie, hinder future films and make producers unwilling to pay out for the genre, thus limiting opportunities to make good adaptations. THAT BEING SAID: I really liked it, I don't play the game but the movie was action-packed, with good fight scenes and great monsters. The best part for me was the realistic and believable reactions (of actors). My kids are hardcore fans of the game and they think the monsters were accurate aside from one being not to scale... lol. They were really negative about watching it because of the reviews until I explained that reviews are basically useless if they focus on anything but the actual movie. They liked the movie overall and how the director made the human world the old world and fit in with the teleporter. Some characters that entered late, died too quickly and didn't contribute to the movie as in the game. They also said it was way more brutal and gory than the game, which I thought was hilarious. Anyway don't ruin the genre for everyone else because of your crappy elistist reviews. Carry-on
212 people found this helpful

Timothy SavioReviewed in the United States on December 27, 2020
1.0 out of 5 stars
Not what I expected
Waited for this movie to be released. Was going to watch on Christmas night. Very disappointed.
184 people found this helpful

Ross K.Reviewed in the United States on December 21, 2020
2.0 out of 5 stars
Not Even Close To What It Should Have Been
This movie had so much potential and it was completely wasted. To land such a talent like Tony Jaa and Milla Jovovich and completely squander them on a half baked story is utterly disappointing.

Coming from the stand point of a Monster Hunter fan who has been playing the series for about 10 years now, this is not the movie the series deserved. It should have been set in the Monster Hunter world to begin with, and stayed there. This whole, our world comes into their world and visa versa is not necessary. All the elements for making a good Monster Hunter movie were right there, they just weren't utilized.

Hopefully if we do get a sequel they will approve on some things and make it a little more palatable for fans and newcomers alike.

JaymeReviewed in the United States on December 20, 2020
5.0 out of 5 stars
MUST WATCH
As a huge MHW videogamer this was PHENOMINAL. I know they made their own plotline, but they executed it perfectly! AND stayed true to the videogames story. HUGE props!!! Must watch!
136 people found this helpful

JessReviewed in the United States on January 1, 2021
3.0 out of 5 stars
Silver lining
I called amazon to see what the issue with the release date ways and from what they told me they were supposed to get the rights to release it that day, but the movie company hasn't released the rights to them yet. So they have to wait. A good movie to watch in the mean time is love and monsters its pretty good. MH will still be released or they can do a money back they told me. They just don't know the date right now because the movie company that owns the rights hasn't relinquished them to amazon to stream yet.
101 people found this helpful

Siris DrackenReviewed in the United States on February 16, 2021
1.0 out of 5 stars
An incredibly disappointing and horrible take on the Monster Hunter Universe.
Verified purchase
I have no idea how this person gets to keep making video game adaptations but wow does they ever continue to disappoint. This is easily one of the worst directions this movie could have been taken, why does modern military and our real life universe need to be mixed with Monster Hunter at all? Its utterly idiotic to completely ignore the world and setting already set in place by the Monster Hunter games...why...just why was this made this way.

The story is just...ugh completely contrived nonsense, Monster Hunter already has a story...just follow that...it's so freaking simple that it's astounding this movie is this bad.

The Wyverns all look freaking great, which just adds to the disappointment because you can see the artists really cared to nail the Monster Hunter universe look...to bad the story and directing didn't do the same.

Do not pay money to watch this, just don't watch it at all, its not worth the time in your life you would have to give up to see this garbage. I am wasting more of my life on this movie now just to write this and tell you to please not watch this garbage and spend the time you saved on something better.

SaunahReviewed in the United States on February 18, 2021
1.0 out of 5 stars
How Do I Get Back My $19.99??
Verified purchase
I’m so freaking disappointed! How do you end your entire cast within 15mins? This movie is just another resident evil. One main character going through unbelievable situations surviving it all, while those around her die.
30 people found this helpful
See all reviews
Back to top
Get to Know Us
Make Money with Us
Amazon Payment Products
Let Us Help You
EnglishChoose a language for shopping. United StatesChoose a country/region for shopping.
© 1996-2021, Amazon.com, Inc. or its affiliates