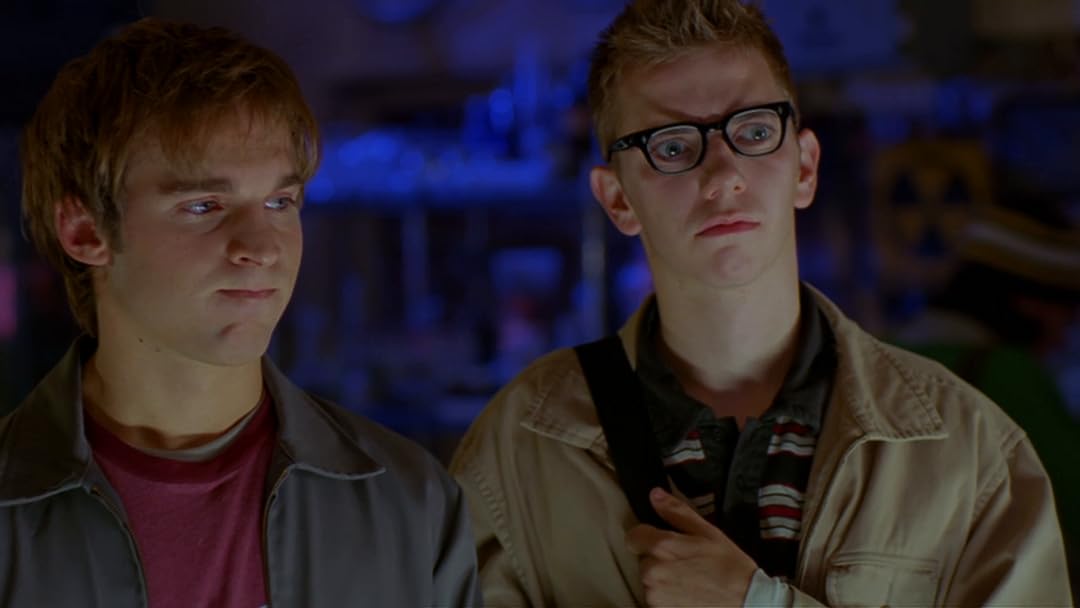 (63)
1 h 32 min2004X-Ray16+
Six friends win a vacation to the Bermuda Triangle and become trapped with only an MTV Crew to help keep them alive. They have to rescue Carmen Electra escape while they all battle the monsters on Monster Island.

Robert I. HedgesReviewed in the United States on July 27, 2017
4.0 out of 5 stars
See Carmen Electra Cuddle A Mutant Fungus!
Verified purchase
"Monster Island" is worth a look if you're interested in a ludicrously campy flashback to giant bug movies of the 1950s and 1960s, but updated for the MTV generation. The cast is headlined by the late, great Adam West, Carmen Electra, and former Backstreet Boy Nick Carter, though Daniel Letterle as Josh and Mary Elizabeth Winstead as Maddy are the main sources of drama. The setup is that a high school class wins a trip to an island in the Bermuda Triangle (!) to see Carmen Electra, and the stereotypes fly. Carmen begins her awful concert (sponsored by MTV...you remember: the network that formerly showed music videos?) and her concert is immediately interrupted by a 25-foot long red-eyed flying ant, which totes Carmen away in its hideous mandibles. This is worth the price of the movie by itself.

An electrical storm cuts all power and communications from the island, so the resourceful teens are on their own. Josh turns from shy introvert to powerful and popular leader, and a small and loyal cadre attempts to rescue Carmen. Maddy (Josh's ex-girlfriend) drags her bloviating politician of a new boyfriend, Chase (Chris Harrison), with them to help Josh. MTV is there to film it all (hey, it's better than most of their shows nowadays), and please be sure not to miss the hilarious scene where the MTV camera operator blathers on about journalistic integrity! Also note the giant praying mantis (Who knew that praying mantises can't swim? But they can fly, right...?) In the middle of all this Chase goes fishing and hooks something that looks like it's half Sleestak and half Creature From the Black Lagoon. Adam West saves the kids from the Sleestak with a shotgun. In the film's most amusing nod to cinema history, West is playing Dr. Harryhausen from the Department of Atomic Energy. (Be sure to watch the extras to learn about the Harryhausenesque stop-motion techniques used in this film.)

After we see Adam West give a hilarious soliloquy on dirty dishes, he introduces his pet fungus, Rudy, which immediately attacks Josh's awful little sister. Rudy is a genetic cross between a predatory fungus and a horseshoe crab, and he's in heat, which explains the aggression. It's clear that Adam has been isolated too long and is going bonkers, but he reveals that the kids have to escape because the island is going to sink! Maddy suddenly becomes a shaman or something because of a necklace she found in the forest. ("My heart! It beats of the ancient drums!") After the Bulldozer vs. Praying Mantis smackdown, Chase is revealed to be the coward we all knew he'd turn out to be and Maddy breaks up with him, seriously intoning this ripe passage of dialogue: "I sever all ties with you! Speak to me no more!"

After the development of some extremely humorous improvised weapons, the bad guys (i.e. Chase and the conniving MTV camerawoman) try to flee, but end up in a web of deceit, complete with hilarious spider. It turns out the entire mountain is a giant anthill, and the Queen Ant (the flying one) has human slaves to gather giant fruit for the ant colony. Adam and the good kids are on a mission to hunt her down, and discover that Carmen is fine but is being forced to sing against her will to control the slaves! Because Maddy found the necklace it turns out she's the queen of the human slaves. She's a fierce warrior who can suddenly speak their totally invented native language, and inspires the revolution against the ants and a war of karate vs. pincers ensues.

The rescue boat is as funny as anything else in the movie, and although Adam West heroically sacrifices himself blowing up the Queen Ant, he gives his pet fungus to a girl to be rescued with the good kids. Fortunately Nick Carter's helicopter just happens to get lost (it is the Bermuda Triangle after all) and finds and rescues them all! Just as the island explodes, Carmen Electra cuddles with the fungus, making this one of the greatest endings in film history.

The special features are worth watching. The trailer is OK, but "The Magic of Monster Island" is very good. There are excellent discussions of the stop-motion and puppetry methods used to capture the authentic monster movie feel, which made me appreciate the movie more for what they were trying to do than the sum product of the film itself. There are also some interviews. Adam West's interview is fun, Carmen Electra's is merely OK, and writer/director Jack Perez is very interesting as he discusses the old '50s monster movies this is a lighthearted homage to.

"Monster Island" isn't a record-breaking work of art by any means, but it does have its own unique charm: it's campy, thematically true to the genre, uses great non-CGI effects liberally, and is just fun to watch. If you're a fan of the giant creatures genre of 1950s sci-fi, this is a pleasant way to spend an evening.

Avid readerReviewed in the United States on March 23, 2019
4.0 out of 5 stars
Rudy is really cute
Verified purchase
This is a MTV production; a MTV movie all the way They don't even try to make things a bit realistic. A elementary school student could probably do better special effects. Except for Rudy, probably. Nothing is to be taken seriously in this movie. It is a campy movie. Josh's sister enters him in a MTV contest, and he wins along with all his friends, to a tropical island music event. In the initial scene, there is a leaking toxic drum, so one knows 'bad' things will happen. But it turns out the reason is 4 H bombs detonated around the island years earlier. After Carmen (Carmen Electra) is taken by the giant flying ant, everyone pulls out their phone, and of course, there are no signals. Naturally, the island is in the Bermuda Triangle. Josh leads a rescue party to rescue her. Adam West has a cameo as a scientist (Dr. Harryhausen) and stupidity and nonsense ensues, which gives this movie an endearing quality. It is so bad it becomes watchable. The giant ants are terrible fakes, while the giant praying mantis has some realism. And an apparent take off of the Creature from the Black Lagoon makes an appearance also. And Eightball (Carmen's bodyguard) has a fight with a praying mantis using a bulldozer, probably homage to the film Aliens. In other words, lots of things were thrown up to get laughs. The movie is silly nonsense, and fun. Hard to dislike a movie that is so "bad". A throwback to B monster movies of the 1950's, except they usually had better special effects. One kept hoping for the pompous Chase to get his due, but one has to wait. Remember, this is a mindless movie.
3 people found this helpful

K. R.Reviewed in the United States on August 4, 2018
5.0 out of 5 stars
Throwback to the old monster movies
Verified purchase
I remember seeing this movie years ago - maybe even ten years ago. Enjoyed it then, and enjoyed watching it again now. It's definitely a cheesy monster movie. Back when this movie was made, the standard was to do the special effects with CGI, but they didn't do that. Instead they went old-school and used stop-motion animation. Yes, those parts of the movie look a lot like the old Saturday morning show 'Land of the Lost'. But that's because some of the sets and creatures designs were done by Sid & Marty Krofft. I had forgotten too that Adam West and Mary Elizabeth Winstead were in this film. This movie is old enough to be in the old 4:3 full frame aspect ratio. There are no subtitles, but there is a 15 minute feature on the production of the stop-motion animation.

All-in-all I enjoyed the movie and happy to add this DVD to my collection.
4 people found this helpful

RocketeerReviewed in the United States on April 10, 2016
2.0 out of 5 stars
Holy moly, this is bad.
Verified purchase
This is a movie almost completely without merit. The young lead actor, Daniel Letterle, in addition to having a stupid haircut, has no charisma whatsoever; in fact, he has anti-charisma; the first time you see him on-screen, you want to punch him in the nose--and if anything, you feel more hostile toward him by the end of the movie. Mary Elizabeth Winstead is attractive, and may have talent, but you couldn't tell it from the wretched dialog she's saddled with; and Carmen Electra is, as usual, a big hole in the screen.
The only good things about this movie are the special effects for the giant mantises, which seem to be computer animation designed to mimic stop-motion, and Adam West's quirky and charming delivery of an enormous dose of exposition at about the thirty-minute mark.
My advice is to fast-forward to Adam West and the mantises--and don't worry that you're missing anything worthwhile by so doing.
3 people found this helpful

EinsatzReviewed in the United States on April 18, 2021
3.0 out of 5 stars
A ragtag band of misfits and nitwits.
Verified purchase
Well. This movie takes place on an island and there are monsters…or just very big bugs and things. The plot is simplistic―save someone named Carmen and get off the island alive. The characters try, tried, are ‘trying’ to act goofy and that supposedly makes this a comedy. Too many people are just playing themselves and as such, aren’t very believable. The best characters are the giant bugs. As a waste of time Monster Island lives up to its full potential.

Air Force BratReviewed in the United States on July 18, 2020
5.0 out of 5 stars
Fun
Verified purchase
I liked that it was patterned after the movies of the 50's: animation instead of CGI; miniature sets; fake boulders; campy one-liners. Kinda like the original Japanese Godzilla movies. I think it was worth it because it didn't take itself seriously!
One person found this helpful

tomReviewed in the United States on December 8, 2021
3.0 out of 5 stars
it was ok
Verified purchase
Not bad it was a fun movie to watch bad special effects but i guess that was part of the fun and it's all ways nice seeing Adam west in something other than batman .

Linda LeeReviewed in the United States on June 19, 2020
5.0 out of 5 stars
A good teenager/family film
Verified purchase
This is like Walt Disney and The Monkeys meet Beach Blanket Bingo.
It was cool seeing Adam West/Batman in a modern movie.
Good Clean fun.
The monsters were great
See all reviews
Back to top
Get to Know Us
Make Money with Us
Amazon Payment Products
Let Us Help You
EnglishChoose a language for shopping. United StatesChoose a country/region for shopping.
© 1996-2022, Amazon.com, Inc. or its affiliates