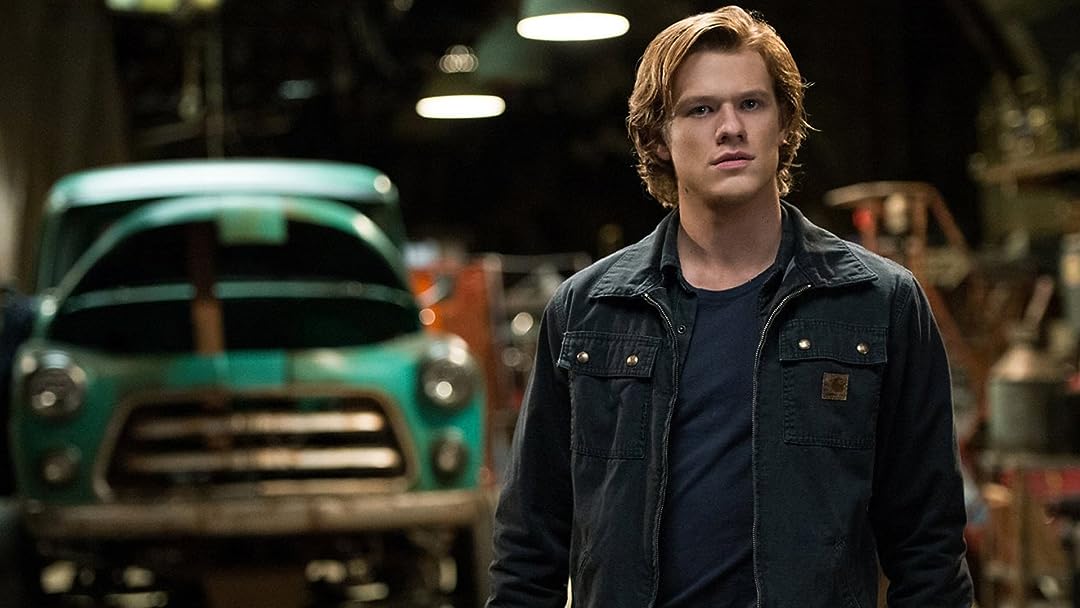 (3,828)
1 h 44 min2017X-RayHDRUHDPG
Looking for any way to get away from the life and town he was born into, Tripp (Lucas Till), a high school senior, builds a Monster Truck from bits and pieces of scrapped cars.

Professional Product Review ServiceReviewed in the United States on May 17, 2018
5.0 out of 5 stars
I expected to watch about 5 minutes...
Verified purchase
I expected to watch about 5 minutes, get something to eat, and go to bed. The description looked pretty lame, but I figured, "check it out for free on Prime, see a few minutues of it, then do something else". When I noticed it was a Nickelodeon movie, I started thinking, "oh, it's a kids movie, not a weird indie film or an odd horror flick. I liked Nacho Libre. Okay, let's give it ten minutes, then I'll go do something else."

I don't want to give any spoilers, so I'll just say this: Good movie for kids, kind of follows an E.T./Black Stallion/Free Willy styled theme of 'troubled kid with no friends befriends exotic creature and vows to save it from the bad guys'. Nothing altogether new here, just an old story done a different way.

Some random thoughts:
1. Main character high school kid is a little too overly clean (no scrapes, bruises, or burns on arms, or face, etc...) and un-scarred to be a skilled mechanic or welder. Mechanics and welders ALWAYS have plenty of scars, scrapes, and bruises. He's a little too young and unskilled to know how to build the things he does in such a short amount of time. He's a little too buff to be an outcast, and looks like he would be at home on a high school football team. I mean, the kid is pretty stocky and barrel chested for never being seen lifting weights.

2. The leading lady would probably lose interest in a kid like that in real life, though the 'tutor' angle makes it work so she 'has' to be around him. She would likely, in real life, get sick of his crap pretty quickly unless she was a mistreated (daddy issues or something) and obsessed teenager with low self esteem.

But these points have more to do with the writing and direction than with the actual actors themselves. And it's a kid's movie, so I'm not keeping a high standard here. The film works in its own way, and over-analyzing it like this only serves to ruin the magic of cinema. It's good for what it was intended to be.

One of the bad guys reminded me of Jeremy Renner, and I think the movie would have been more fun if they had gotten Jeremy Renner to do the part (because I like Jeremy Renner), but that's just a meaningless random thought.

There was not a lot of depth to the characters, but the character transformations that needed to occur for the film to work did happen. I did not think the acting was overall bad like some reviewers said, but then again, I'm no actor so who am I to tell them how to do their jobs? I mean, basically, the film was what it needed to be for a fun family movie, but not everyone is going to like it. I doubt I would watch it again just for the sake of watching it again, but I don't regret having seen it. The kid actors have potential if they stick to their craft.

There is a market for 'straight to DVD' movies. To the best of my knowledge, guys like Martin Scorsese and Oliver Stone don't direct those kind of movies. I think some of the 1-star reviewers had their expectations a little too high for this one.

I didn't turn it off and go do something else.

Snow flake eraserReviewed in the United States on May 8, 2022
4.0 out of 5 stars
It is not a very accurate view of Oil Companies at all!
Verified purchase
I actually really like the movie but folk being a engineer and have actually worked for Environmental companies and research labs in the field on drilling rigs for 49 yrs. This is not a good example of how things actually happen on a blow out ect. The one thing that is very obvious about the misdirection of the film obviously made from activist is the fact that anything that could eat and digest and thrive on oil and byproducts would be way more valuable than the oil itself! Imagine having something that could cleanses oil spills, leaks, old gas stations, old leaking pumps at farms. It could actually eat old asphalt road beds and poop dry asphalt to be reused. The sky is the limit on something like this in the help to clean up our lands. Oil Company scientist and people like myself are very environmentally conscious. The products used to drill and complete these wells are the same thing you have in a lot of your food, lotions and makeup. Fluids are checked several times a day with labs, cuttings are observed by geologist and anything different is recorded. Sample bottles are run to check for SRBs with eats sulpher and makes poison gas. There is alot more to it than the movie shows and nobody on location would hide or pollute on purpose. Its been like that for the last 40 yrs or more and nobody I know want to destroy land or life. Any oil or diesel spill is dug up immediately and saved for remediation. Literally a gallon spill is recorded and remediated immediately. A blow will have crews as soon as its safe to get every drop that they can and people in the oil fields really do care and anybody that sees anything in any is required to make a report all the way down to worms corner. But this was cute film and gives a person the warm and fuzzy feeling most oil companies no longer have security like they used to. They should up to drug test everyone unannounced and the gates were locked and everyone search and tested. Automatic discharge if you failed. They would search you vehicles for guns and dope with dogs ect.. Then they found out that what they was doing was illegal search and seizure as many of the workers like myself travel hundres of miles and in my case I was required to live on location and work as many hrs as needed without sleep, or relief but I was rewarded well. I did the lab work, crunched the numbers and its a whole bunch of geometry, hydralics, newtonian, Reynolds, Plastics ect and made 2 reports and all the recommendation to the drilling fluids to keep the well safe and specification proper to remove cuttings, keep the bit cool, controll the influx of fluids and gases, take care of any corrosive gas or fluids ect. Like i said...There is a incredible amount of science and equipment involved and the utmost respect for this planet trying to recover the hydrocarbons.

Avid readerReviewed in the United States on June 12, 2022
4.0 out of 5 stars
Unexpected and wonderful
Verified purchase
I really wasn’t sure what to think, and as it started, it seemed it would appeal to children. But as the film progressed, it was clear it would appeal to the entire family. It is well made, and a lot of fun to watch. There will be critics that will take issue with having the oil company as the bad guys and being unrealistic. But this is a movie, not a documentary, and while some of the actions are over the top, but they are also funny. It was amazing how much emotion they put into the creatures considering they were not that much more than a blob of jelly with tentacles. The face sold the creatures. But sit back and have fun watching, and don’t take issues with the some plot points. The creatures came out of pressurized water at 10,000 psi, yet at the end, the intention was to get them back to their native waters (nest) through an open vent. The oil company is intending to destroy them so they can keep drilling, as they ‘owned’ the town and its people. I will agree that it is a bit of cheap shot that at the end endangered reptiles were ‘planted’ on the oil company land to shut them down.

Abigail EnglerReviewed in the United States on June 19, 2018
5.0 out of 5 stars
Don't Judge a Movie by it's Bizarre and Quirky Cover
Verified purchase
Long story short, I didn't expect to watch the entire movie. As someone in their 20's with no kids as a reason to watch this movie, I selected it purely based off the fact is was free on Prime and Lucas Till from MacGyver is the lead. There are quite a few big names in this that I didn't even know about. I really didn't plan on watching the whole thing, I thought I'd lose interest and move on but seriously, it's a good movie. It is definitely family friendly. My husband and I both laughed out loud multiple times. I liked the element of romance without it taking over the entire plot, I liked the out come with Rick and Tripp's relationship. I got watery eyes towards the end, and overall enjoyed the movie. Glad I watched it.
6 people found this helpful

Casey HellerReviewed in the United States on January 5, 2018
4.0 out of 5 stars
Great Family Movie
Verified purchase
I don't know why this movie got such bad "critical" reviews. Maybe because it lacks curse words, sex and violence (mostly) that seems to dominate media these days. Its a charming story that draws you in later in the movie. Not even remotely realistic or even plausible but the "monster" is lovable and the film is well scripted and directed. This is a great family movie night film and my 6 & 8 year old Grandsons loved it.
13 people found this helpful

Fryzilla: King of the MonstersReviewed in the United States on January 1, 2018
4.0 out of 5 stars
Cars from the Black Lagoon
Verified purchase
A movie about squid creatures that eat oil and live in trucks, what's not to love?! I knew this wasn't going to be a groundbreaking film, in fact the trailers for this movie made me think this going to be a piece of junk, but this movie surprised me. It was a fun ride with likeable characters and a creative plot, plus Creech is adorable. People complain that Hollywood doesn't come up with anything original anymore and stuff that is original now is dumb, well they just don't have any open minds. Sure this movie is dumb, but a very enjoyable dumb.
9 people found this helpful