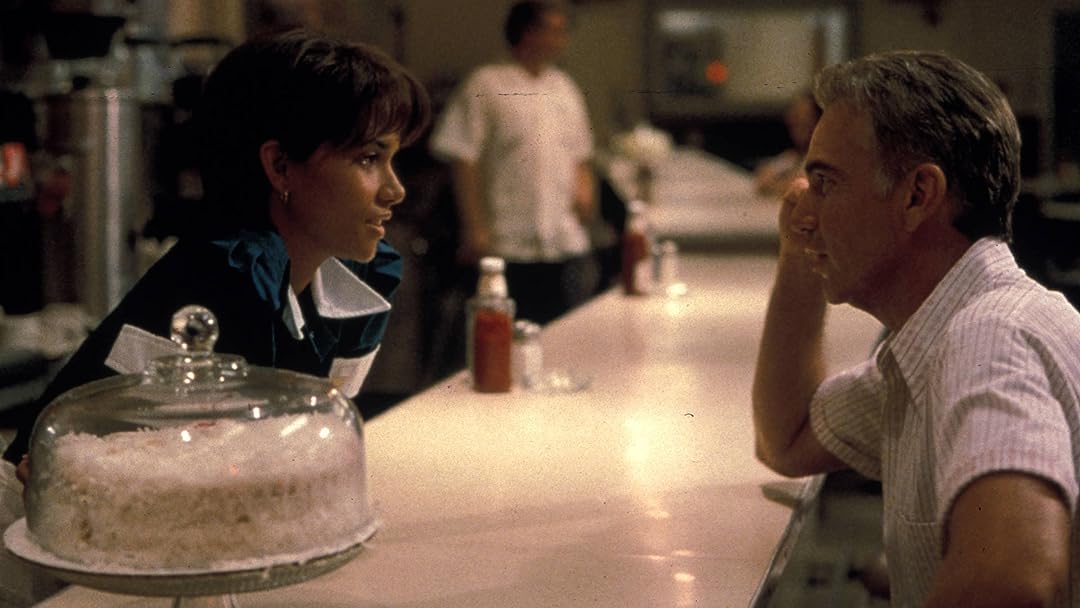 (1,505)7.01 h 51 min2021X-RayR
In the deep South, an embittered prison guard works on death row. After a terrible tragedy, he begins an unlikely but emotionally charged affair with the African American wife of the last prisoner he executed.

MyOpinionReviewed in the United States on November 4, 2018
2.0 out of 5 stars
Overrated Film, Overrated Actress...Overrated...Period!
Verified purchase
Nothing terribly special in the world of films in my eyes, but a good cast of Billy Bob Thornton, Peter Boyle, Heath Ledger, Piddy Diddy and the young boy, Coronji Calhoun, who played Tyrell, the obese son of Leticia Musgrove, well played...but an Academy Award for Halle Berry in her role? Seriously?! Berry mumbled a few incoherent lines, took her clothes off a couple times, feigned lurid sex, and pouted...don't forget that...pouted (eye roll)! I didn't find her very convincing as a simple black woman living in the Deep South struggling with tragedy after everything in her life falls apart. She came across more like someone hanging out in Malibu rather than a destitute woman somewhere in racist rural Georgia...not an Oscar worthy performance, not even close.
And the actual story; I kept waiting for something exceptional to happen but it never really did...nope! No depth, not much history to explain the circumstances or help flesh it out. Just odd! The obvious questions bombarded my thoughts; Why was the convict put to death? What was his crime? Why didn't the warden allow the phone call prior to the execution? Why was Leticia so cruel and abusive to her son when he needed her most? Why didn't anyone in this film show an appropriate and expected level of grief? Why was the grandfather so twisted? Why, why why...it just never pulled together satisfactorily to explain what motivated these events and characters. Over the years, this movie has garnered so many accolades...did I miss something? Were scenes edited or deleted because it sure felt like it! Why did Sonny suddenly turn the gun on himself instead of walking out during the confrontation with his father? He must have already known what hateful people his father and grandfather were. The story line was so bleak, depressing, unexplained and relied so heavily on lurid sex scenes...what was the point? I lacked empathy for most of them other than Sonny and Tyrell. Lurid scenes do not fill in a vacant plot line. Disappointing as it had so much more potential if only the director had reflected and told us more of what made these people who they were.
30 people found this helpful

LightningReviewed in the United States on April 20, 2021
1.0 out of 5 stars
This film is BRUTAL
Verified purchase
I love nearly everyone in this movie so I figured I definitely needed to watch it.

I could not finish it.

This movie is BRUTAL. I'm not kidding. Every single scene is painful to watch. Not anything to do with acting, directing, etc. It's the content, the happenings, the situations.

I had to shut it off a little after the father/son 'thing'.

Maybe you need to keep watching to get to the 'good parts' but nope- I don't need to watch this kind of movie.

Unless you are in the mood for a gut wrenching, make you depressed/angry movie, I recommend NOT watching this one.

I know not every movie has a happy ending or plot, but this movie seems to just have everything at its absolute worst and asks you to just deal with it. I will never be desensitized to violence and this type of movie will always bother me.

Watch at your own risk.

deeReviewed in the United States on November 2, 2020
3.0 out of 5 stars
Not her fault she is miscast
Verified purchase
Disliked this movie the first time around, because Halle Berry just wasn't up to the task. Second time around saw a lot more to like. Ledger was very good. Sorry they wrote him out so early. Halle is just too beautiful for the role and not a great actress. She was okay. Surrounded by better actors. The story also is not really believable. Hank's instant transformation from racist creep to sensitive loving guy just doesn't ring true.
8 people found this helpful

P. KimReviewed in the United States on December 3, 2018
5.0 out of 5 stars
So much deeper
Verified purchase
I watched this movie almost 15 years ago and watched it again today-

Wow- I did not realize the movie was so deep. I caught the racism, broken family, broken prison system etc.

But what I did not realize was how well the movie was made. Of course, when I first saw it, I said good acting but watching it again, I see real good acting also super deep implications-

I also love the movie because it delivers the movie effectively in the perfect time. Not much to cut out-

Nora HagueReviewed in the United States on July 13, 2014
5.0 out of 5 stars
A simple masterpiece
Verified purchase
There is probably little I can say about this film that hasn't been said before. It is a seamless work of art, blending so many elements--ingrained racism, the tension inherent in families, the sad results of bad parenting, the cruelty of society at large--that one is amazed to see it all fit in a single movie. Yet it gets these themes down effortlessly, thanks to fine writing, directing, and performances that shine through everywhere. For anyone who doesn't know, "Monster's Ball" is about two very disparate parents who are plainly awful to their children. One is a corrections offiicer in a state penitentiary, living with his bigoted, rigid father, and the son he seems to resent without cause, who is following in his footsteps. The other is a mother trying to raise a son whose father is on death row in the state pen, and due to be executed as the film begins. During the course of the movie, both parents lose their children, and a profound shift occurs in each of them. Suddenly, these two people who never should have met, who never should have been destined to get along, recognize in each other a kindred spirit--and the result is so uplifting and beautiful. I don't want to give the movie's best moments away; that would ruin it for future audiences. But the changes in character, the absolutely wonderful cast, boosted by fine writing and direction and even a haunting, lovely score, are bound to capture imaginations everywhere. Halle Berry gives the performance of a lifetime as Leticia Musgrove; Billy Bob Thornton is so subtle in his portrayal of Hank Grotowski that you want to applaud him for every scene in which he DOESN'T go over the top. And then there is Peter Boyle, the veteran, whose characterization of Buck, Hank's father, makes you forget he's acting. Finally, there is Heath Ledger, who is simply heartbreaking: you see all the talent there, you know you are watching a future mega-star at work, and then you realize he's died, on the verge of so much greatness. Ledger truly was a rare find. He was so young; yet in "Brokeback Mountain" he managed to believably age two decades. He had it all down: the walk, the physical stance, the vocal changes....and his talent was surely on display in "Monster's Ball". Already, he had star quality. To see it snuffed out so pointlessly is killing. But enjoy him in this film; take a look and you are sure to come away uplifted. There is no showboat scripting or acting here. It is quietly affecting. But if you want to see a move that takes a genuine look at human nature--its ugliness and sadness and its redemption--this is the one to watch.
39 people found this helpful

joel wingReviewed in the United States on April 24, 2021
4.0 out of 5 stars
Heavy hitting story of 2 people trying to find happiness out of endless tragedies
Verified purchase
Monster’s Ball is about the impact of the execution of Sean Puffy Combs. That effects everyone involved from his wife Halle Barry and kid Coronji Calhoun two the two prison guards Billy Bob Thorton and his son Heath Ledger. Both families are dysfunctional. The story hits VERY hard as it is one tragedy after another initially. They use this repeating sequence to drive that home of Thorton wiping blood off of things. In the end the story comes down to the two main character Barry and Thorton being two very lonely and depressed people that even hate themselves in a way trying to find some happiness.
One person found this helpful

Richard PengalaReviewed in the United States on May 11, 2021
5.0 out of 5 stars
Bitter-sweet intense drama
Verified purchase
What an amazingly realistic & at times almost documentary-like tale of how God works in mysterious ways to create a beautiful humane love bond & union of souls out of tragedy & vulgar merciless inhumanity...Halle Berry & BillyBob Thornton give excellent performances under a great director who let them swing high & low to there own tune at times. Mr.Thornton's boyish attempts to please & satisfy his new girlfriend is embarrassing yet Ms. Berry turns out to be mature and open- hearted enough to swing hot. Thornton is a quick study & picks up on her cues to the feel good delight of them both...and splits some juicy black oak the way a white boy should who has recently broken the chains of racial prejudice. The kudos and Academy awarding is well deserved. A work of art.
See all reviews
Back to top
Get to Know Us
Make Money with Us
Amazon Payment Products
Let Us Help You
EnglishChoose a language for shopping. United StatesChoose a country/region for shopping.
© 1996-2021, Amazon.com, Inc. or its affiliates