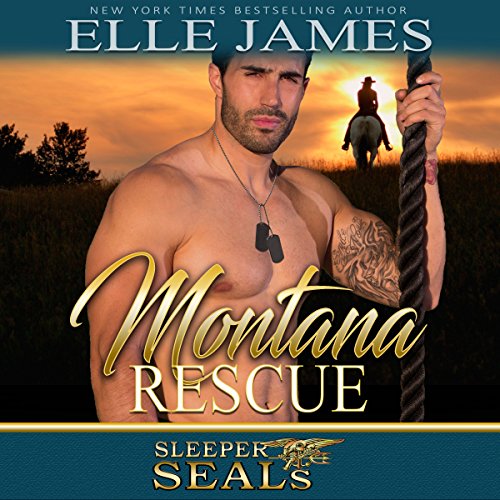 The Sleeper SEALs are former US Navy SEALs, recruited by a new CIA counter-terror division to handle solo dark ops missions to combat terrorism on US soil.

Plagued by survivor's guilt and a bad knee, SEAL "Mad Dog" Maddox left the Navy and buried himself in a mountain cabin in Colorado where the only creatures he hunts now are those he puts on his table. Slowly going out of his mind with boredom, he's on the verge of throwing himself off a cliff when an old friend, his former commander, gives him a reason to live. His mission: Team with a special CIA operative and assassin to reveal a terrorist on home soil.

Raised by her father in the Crazy Mountains of Montana, Jolie Richards learned to fire guns before she learned to do her hair. When her father was killed by a careless hunter, Jolie joined the CIA to get far away from Montana and the emptiness of a home without her father. Her skills as an expert marksman land her a job as an assassin. When she kills one of a pair of brothers radicalized into ISIS, she becomes the target. In order to flush out the ISIS threat, she sets herself up as bait, but takes him to familiar ground in the Crazy Mountains. Used to working alone, she finds she's been assigned a partner. She just hopes he stays out of the way of her accomplishing her mission.

Together, Mad Dog and Jolie team up with the Brotherhood Protectors, a protection agency comprised of former military members, to expose their enemy before he can kill more innocents.

Montana Rescue is part of the Brotherhood Protectors series. It is also in the Sleeper SEAL connected series. Each installation can be enjoyed as a stand-alone. They do not have cliffhanger endings.

4.6 out of 5 stars
4.6 out of 5
369 global ratings
How are ratings calculated?
To calculate the overall star rating and percentage breakdown by star, we don’t use a simple average. Instead, our system considers things like how recent a review is and if the reviewer bought the item on Amazon. It also analyzes reviews to verify trustworthiness.
Top reviews

Donna Ferriola
5.0 out of 5 stars Montana Rescue
Reviewed in the United States on January 14, 2018
Verified Purchase
This was another excellent action packed romantic story in the multi author Sleeper SEALs series with this one centering around Caleb Mad Dog a DEAL no longer because of a bad knee. He lost everything he loved when he scrubbed out so he rented a cabin in Colorado to figure out what he would do with the rest of his life. He was contemplating jumping off a cliff when Hank, his friend approached him with news about someone that wanted to offer him a job handing him a phone. Caleb called Commander Lambert and he offered him a job with the CIA's sleeper group that was taking down a terrorist before he killed a CIA operative in Montana. Caleb accepted this offer and headed to Montana to help this CIA agent, Jolie Richards, and take down this terrorist, Nadir. This op have Mad Dog purpose in life and Jolie ended up being the love of his life. This story was amazing as these two worked together, saving each other's lives with Hank's organizations help to take down the terrorist that was after Jolie at her ranch where she baited him to go. Caleb gave Jolie his love and she now was no longer alone as she loved him too. This was a fantastic romantic action packed thriller as Caleb and Jolie got their happily ever after at her childhood home,Rocking R ranch in Montana and killed the terrorist, Nadir. She quit working for the CIA and Caleb started working for his friend Hank at the Brotherhood Protectors while they together worked the ranch. I cannot wait to read the next release in this Sleeper SEALs series.
Read more
2 people found this helpful
Helpful
Report abuse

TeeJay
5.0 out of 5 stars Absolutely loved this addition to the Sleeper SEALs series
Reviewed in the United States on December 11, 2017
Verified Purchase
When Greg Lambert sends Hank from the Brotherhood Protectors to Colorado for Mad Dog Maddox, a former SEAL who was medically retired to protect a CIA assassin little does he know that visit will save his life. He'll understand that his injured knee won't keep him from protecting his soon to be love.

Jolie Richards grew up in Eagle Rock, Montana where her father raises her after her mother dies but when he is shot during a hunting trip she leaves everything and joins the CIA but after 8 years away after finding out she's been targeted by a homegrown terrorist. Even though she's been assigned a protector Mad Dog will show her what she's been missing lately, love. There will be a racoon removal scene that's hilarious and finding out that the town she grew up in is now being plagued by a motorcycle gang. When Mad Dog and Jolie will fortify the ranch slowly becoming a home to them and when the gang tries to attack them its the Brotherhood guys, local sheriff and more who will capture the gang but also the terrorist who is after Jolie.

Will Mad Dog stay or return to his solitary life? Will Jolie sell the ranch or realize that its where she wants to start a new life with the man she loves?
Read more
One person found this helpful
Helpful
Report abuse

TURTLE MOM1
5.0 out of 5 stars Montana Rescue is hard core.
Reviewed in the United States on November 11, 2017
Verified Purchase
Take one retired Navy Seal and a CIA agent with a terrorist planning on revenging his brother's death and you have the premise of Montana Rescue in one sentence. But this book is so much more and you won't be able to put it down. Mad Dog and Jolie are an unlikely pair until you get to know them. He had always worked as part of a team and her work is always alone and yet the man with no family and the woman who had a great family find a way to come together in such an amazing way it will make you smile. Character development and secondary characters play such an intequal part in this book I love the Brotherhood Protectors and Hank Patterson. Hank and Sadie remind me of Wolf and Ice and that is a good thing. Love Elle James her books have such strong visuals that you are almost right there with her characters.
Read more
Helpful
Report abuse

Kindle Customer
5.0 out of 5 stars Absolutely loved it
Reviewed in the United States on November 22, 2017
Verified Purchase
What a great read for Thanksgiving! Totally recommended this to any one who loves and action packed seal story. This author never disappoints. This is a story about Jolie and mad dog.she's a CIA agent and he's a retired seal,called up to flush a terrorist out. Full of action and romance. Not to mention a little reunion with some of my favorite men and women. It's like a real, although fictional, family gathering. Thanks for the stories, keep them coming. I like to recommend the other series my this author ,and those of the other writers who collaborated in the sleeper seal series. They are all wonderful writers with great stories to tell!
Read more
Helpful
Report abuse

samanthagirl
5.0 out of 5 stars Great Read
Reviewed in the United Kingdom on November 7, 2017
Verified Purchase
Jolie Richards is a CIA assassin and has been targeted by Nadir the brother of one of her kills. Mad Dog an ex Seal is sent to assist her in bringing down Nadir.

They meet at Jolie's family ranch which she has not visited for eight years after her father was shot and killed.

Targeted by a motorcycle gang under the control of Nadir both Jolie and Mad Dog work together to defeat them.

This is a very well written story with likeable characters and an interesting plot. I particularly enjoyed the developing relationship between Jolie and Mad Dog. A book well worth reading
Read more
Report abuse

Kindle Customer evelyn lawrence
5.0 out of 5 stars Review
Reviewed in the United Kingdom on October 31, 2018
Verified Purchase
Well another very very good story ,I would love to know if seals do jobs to help flip once they retire
Read more
Report abuse

Amazon Customer
5.0 out of 5 stars Wonderful Book
Reviewed in the United Kingdom on November 11, 2017
Verified Purchase
I really love reading this book. It was powerful both for men and women. Had a good story with an exciting ending. Cannot wait for the next instalment.
Read more
Report abuse

Elspeth
3.0 out of 5 stars Not my favourite in this series
Reviewed in the United Kingdom on November 8, 2017
Verified Purchase
Surprised I found this a tad tepid, because I have enjoyed other Elle James books. No accounting for this, but I have to say I LOVED Mad Dog.
Read more
Report abuse

Debra Muston
5.0 out of 5 stars great read
Reviewed in the United Kingdom on May 10, 2018
Verified Purchase
Love the stories of romance in oddest situations and honouring those who give their time and lives to keep us safe.
Read more
Report abuse
See all reviews
Back to top
Get to Know Us
Make Money with Us
Amazon Payment Products
Let Us Help You
EnglishChoose a language for shopping. United StatesChoose a country/region for shopping.
© 1996-2021, Amazon.com, Inc. or its affiliates