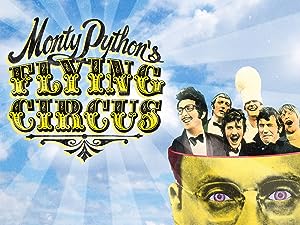 (259)
19707+
In the show's second series the Pythons were even more confident and daring than in their first, as evident in both the tightness of the editing and the breadth of their material - thus avoiding the "sophomore jinx."

Brutally Honest ReviewerReviewed in the United States on August 16, 2022
5.0 out of 5 stars
Can There Be Any Better?
Verified purchase
"The standard by which all TV comedy is judged." The ultimate review statement. Yet absolutely true from SPAM to Fish License to Dead Parrot Sketch --> this is comedy gold.

The entire Python collection is quite expensive, even without the classic films, so buying it in parts may be your only option, but buy it you must.

And start with Season One! Today, man!

paulReviewed in the United States on July 24, 2022
5.0 out of 5 stars
Its a comedy.
Verified purchase
If I have to explain to you who/what Monty Python are/is. Well, Wikipedia is a click away.

Shawano_brewReviewed in the United States on September 8, 2020
5.0 out of 5 stars
Something completely different
Verified purchase
Good for baby boomers as perhaps an escape to reflect on their teen years, popular television of the 70s.
One person found this helpful

R. Scott VanceReviewed in the United States on April 5, 2020
3.0 out of 5 stars
Worth Watching Even With The Laugh deTracting
Verified purchase
Love these skits. Partly because I remember their boldly, bizarre freshness at the time they came out and partly because the ideas, their physical humor, and facial expressions are still just funny. They're also worth watching if just for the cultural touchstones. What does NOT age well is the annoying, over-the-top laugh track. Painful that.
One person found this helpful

dead treeReviewed in the United States on March 20, 2007
4.0 out of 5 stars
Buy it Cheap
Verified purchase
The material on this disk is very funny. Unfortunately it is only about an hour long. A good portion of this hour is taken up with other Python's reminiscing about Graham. Some of this is interesting & would be fine if the disk were longer. It looks like they even cut some of the skits purely for space issues. This seems ridiculous considering the DVD could easily hold more. (All the Personal Best series run this same length.)

My advice is do not pay anywhere near full price for this. If you can get it for really cheap...go for it.
8 people found this helpful

George E HarrisonReviewed in the United States on December 18, 2003
1.0 out of 5 stars
A Warning for Those Who Have Bought Such Sets in Stores
Verified purchase
I preface my remarks by stating that the one-star rating I have given this video is not a reflection of the quality of the video itself. Rather, it reflects the quality of the descriptive information provided by Amazon in regard to what the set contains.
Those who have bought boxed sets of Monty Python in stores know that stores sell them with three VHS tapes to a box and that such sets are generally displayed on the shelves with the open side of the box facing out. So that the customer can easily tell which tapes are contained in the box, each tape is identified by a Volume number. When you look at the box on the shelf, all you see is the Volume numbers.
The description provided here on Amazon's website indicates that this particular boxed set contains Episodes 20 through 26. Note carefully that nowhere in the description does it mention what Volume numbers the set contains.
I knew that I had previously bought Volumes 1-15 in stores, but I made the critical mistake of assuming that Episode number was the same as Volume number. Therefore, I expected that this set would contain material that I didn't already have.
Unfortunately, when I received the set, I was very disappointed to discover that it contains Volumes 10-12, which I do already have.
Therefore, I give this warning to people who have bought boxed sets in stores in the past and are now trying Amazon for the first time. Make sure you know what you're getting, and be very careful not to assume that Episode numbers are the same as Volume numbers.
9 people found this helpful

Andrew HoffmannReviewed in the United States on July 3, 2012
2.0 out of 5 stars
It is what it is
Verified purchase
The best bits of this DVD are an interview with Terry Gilliam, his animated introduction, and several of his favorite Monty Python animations edited together as a single continuous body of work.

Unfortunately, a superimposed border has been added around the perimeter of the animation, drawn to look like you're watching it through a TV set. This is likely to remind viewers with widescreen TVs that Python episodes were shot for square TVs, but it's distracting and appears to slightly crop the animation.

Also, frequent Python viewers will notice the shorts have been edited down. For example, 'House Hunters' is included, but the joke where the house enters the woods followed by a flushing sound is missing.

As a fan of all things Terry Gilliam and animation in general, I had hoped that some of his earlier animated works would be included as extras, but the only worthwhile special feature is the interview.

Since this is the sole collection of Gilliam animation available on DVD (so far, outside of the Python sets), it's worth watching at least once while hoping for an eventual 'Terry Gilliam Animation Collection' with more content and assembled with greater care.
4 people found this helpful
See all reviews
Back to top
Get to Know Us
Make Money with Us
Amazon Payment Products
Let Us Help You
EnglishChoose a language for shopping. United StatesChoose a country/region for shopping.
© 1996-2022, Amazon.com, Inc. or its affiliates