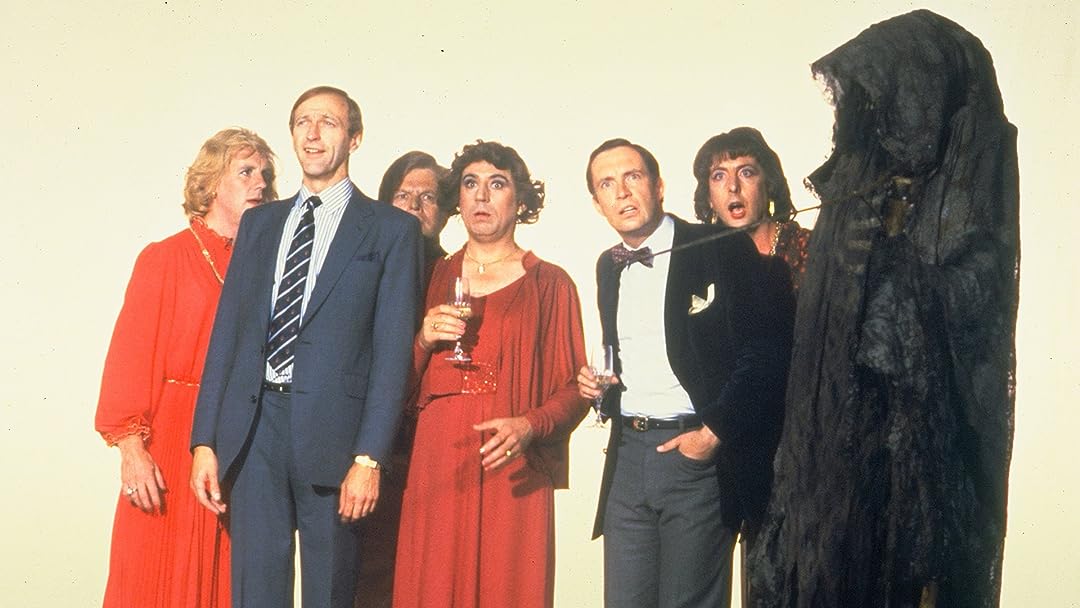 Monty Python's The Meaning of Life

(3,158)
7.51 h 47 min198313+
The stages of life are told through multiple sketches and songs by the British comedy troupe. The seven parts of life cover birth, growing up, war, middle age, organ transplants, old age and death.

Vince L.Reviewed in the United States on January 23, 2019
5.0 out of 5 stars
I'm not going to give this classic less than 5 stars. NO WAY
Verified purchase
I believe this is the best of the Python films. It has a well thought out story and is "complete" as a film. Real film, real locations, acting, dialogue, and excellent direction. It unfolds as an epic film on the screen. It has it's overtly funny scenes, but some are understated and this film deserves a few watches to really get it. I thought they did a stellar job for sure. If you're new to Python, you'll have to understand that the 5 main writers/performers (Jones, Palin, Cleese Chapman, Idle) play multiple characters in everything they do so watching them morph from one to another is a real treat. Terry Gilliam is the 6th member and the animator and while less used as a performer has some really funny moments (look for the jailer character). This film was so well made I wish the Pythons stayed on this path and made more quality full length feature films. A must watch and a classic.
8 people found this helpful

Sony_XLReviewed in the United States on January 16, 2021
3.0 out of 5 stars
Uneven but worth watching
Verified purchase
As always with films that are basically a long series of short sketches it's hard to keep the material even in quality. That problem is evident here too. Some of the better sketches are among Pythons funniest, others are hardly funny at all. This is undoubtedly the darkest of their work, a very bleak and sometimes grim look at society. And it's also in these darkest moments that the movie is at it's most flawed.

I did like the opening part, "The Crimson Permanent Insurance" even though it's got almost nothing to do with the rest of the movie. It has the quirky style of Terry Gilliam that usually doesn't really appeal to me, but this time it did. The other episodes, that all deal with different stages of life (including some aspects of life like "Fighting each other") are mostly also well done. The one i found to be least funny is the last part called "Death". It wasn't awful, just not very good. The rest of the movie is somewhat of a roller-coaster going from not very funny to brilliant. The "Mr Creosote"-scene as it's called being the most disgusting and over-the-top part, the part showing the war in Africa (and two men dressed as a tiger) being among the funniest.

For someone not too familiar with Monty Pythons work this might not be a good start. Rather one should try to watch one of their more light-hearted work. While i find this movie to have it's points, actually i think many parts are quite funny, there is still a streak of black which disturbs the experience. I know a lot of people who dislike this movie, and granted it's not for everyone. But for fans of Monty Python or their brand of comedy in general, there are still parts here well worth watching.

Michael KingReviewed in the United States on May 13, 2015
5.0 out of 5 stars
Monty's Masterpiece
Verified purchase
I'm glad that I bought the very reasonably-priced, Blu-ray version of this classic film. It allowed me to reacquaint myself with the classic sketches that made up Monty Python's final feature-length film. In addition, the many bonus features, some exclusive to the Blu-ray version, were entertaining and informative. The Pythons talk at length about how they wrote some sketches, but had trouble coming up with a unifying theme for the movie. One of them hit on the idea of addressing the meaning of life, and the film took shape from there. In true Python form, "The Crimson Permanent Assurance" short subject, directed by Terry Gilliam, precedes "The Meaning Of Life." The film itself proceeds chronologically as follows: "The Miracle Of Birth," "The Miracle Of Birth Part II — The Third World," "Growth And Learning," "Fighting Each Other," "The Middle Of The Film," "Middle Age," "Live Organ Transplants," "The Autumn Years," "Death" (including the after-life), and "The End Of The Film."

The Pythons were at their creative peak, and tackle their subjects brilliantly. As Eric Idle points out in the 30th anniversary reunion bonus feature, the movie is a musical disguised as a comedy. Classic songs include "The Meaning Of Life," "Every Sperm Is Sacred," "The Galaxy Song," and "Christmas In Heaven." Classic characters include Humphrey Williams, the sex education teacher (John Cleese), the morbidly obese Mr. Creosote (Terry Jones), the Catholic father with many children (Michael Palin), Gaston, the waiter (Eric Idle), Howard Katzenberg, the liver donor (Terry Gilliam), and the Vegas lounge singer in heaven (Graham Chapman). "Monty Python's Flying Circus" TV series was brilliant, ground-breaking, surreal, and hilarious. All of those adjectives apply to their final film, "The Meaning Of Life." Buy it before you die.
15 people found this helpful

joel wingReviewed in the United States on May 16, 2022
4.0 out of 5 stars
Classic irreverant and subversive Python
Verified purchase
This is a series of skits about what life is about. Some of them are very subversive. For instance the movie says it will look at birth in the Third World and goes to a factory town where people sing a song about every sperm being sacred because the Catholic church opposed contraception so a family has over 50 children. That leads into a diatribe by Graham Chapman about how Protestants don’t follow the dictatorship of the Papacy and have the right therefore to wear condoms! The whole thing is completely irreverent which was what Python was known for. Not all the skits are the same quality however which is the main drawback but I can take that since most of the Meaning of Life is quite good.

G. SmithReviewed in the United States on April 5, 2014
5.0 out of 5 stars
One of my favorite movies ever
Verified purchase
I have been a fan of MPFC since the first time I saw their TV show on PBS back in the early '70s. I first saw "Meaning of Life" in a theater in Culver City, CA, and when I bought my ticket and sat down in a typical seat near the middle, before the movie began an usher came in and told me I'd have to move because they were higher-priced "Loge Seating." Hunh?? I wound up seated near the front left corner of the theater, and the acoustics were SO BAD that I could hardly hear a word they were saying. I had to go to a less greedy theater to watch it before I had a clue what was going on.

I still get cracked up by the "Very Big Corporation of America" and that speech about wearing enough hats and the weird jargon the guy makes up ("abyneseal"), but the Sperm Song and the Universe Song are even funnier. The best things, though, are the prayer and the hymn ("O Lord, ooh you are so big, so ABSOLUTELY huge! Gosh, we're all really impressed down here, I can tell you! ...)

If you haven't seen this movie you have denied yourself one of cinema's greatest pleasures ever.
8 people found this helpful

93VetteReviewed in the United States on October 12, 2021
4.0 out of 5 stars
A decent final Python film
Verified purchase
It had been many, many years since I last watched this movie so I bought it since I already had the other two. This was always the weakest of the three films to me as Life of Brian and The Holy Grail were much funnier and focused. After a slow start I almost wished I'd bought something else, but it picked up and was quite funny once I got about a third of the way in. Love it or hate it type humor, but worth owning.

DebOReviewed in the United States on December 24, 2019
5.0 out of 5 stars
BRILLIANTLY HILARIOUS
Verified purchase
This is one of the funniest films from the premiere comedy troupe of our time. From "Every sperm is sacred" to Mr. Creosote, it keeps me laughing out loud every time I watch it, and I've probably seen it a dozen times over the years. It's right up there with "Holy Grail" as one of Python's best.
3 people found this helpful

Amazon CustomerReviewed in the United States on November 23, 2017
5.0 out of 5 stars
It's not supposed to be anything like the Holy Grail
Verified purchase
This movie has some how become a part of my family's holiday tradition. It started in my childhood with my Dad, asking us if we wanted just one wah-fur thin mint. And now it's tradition to watch this during the holidays. All the reviews on here about how it's so lacking compared to the Holy Grail, are missing the point. It's not supposed to be anything like the Holy Grail. It's focus is in an entirely other direction, aka life. There's a lot in this film that feels relevant to present day. It's fun, it's satirical, it's a bit tongue in cheek, and it's got too much sentimental value for me.
10 people found this helpful
See all reviews
Back to top
Get to Know Us
Make Money with Us
Amazon Payment Products
Let Us Help You
EnglishChoose a language for shopping. United StatesChoose a country/region for shopping.
© 1996-2022, Amazon.com, Inc. or its affiliates