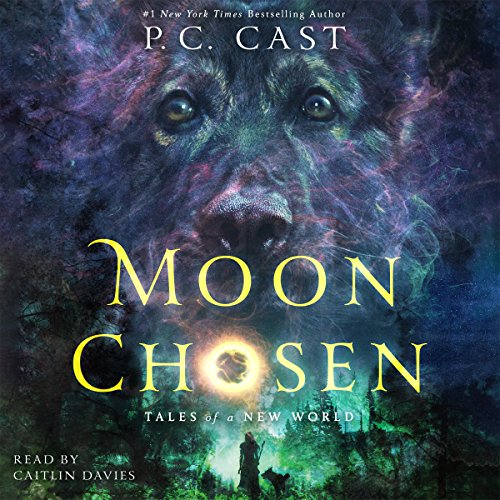 New York Times best-selling author P. C. Cast brings us a new epic fantasy set in a world where humans, their animal allies, and the earth itself has been drastically changed. A world filled with beauty and danger and cruelty.

Mari is an Earth Walker, heir to the unique healing powers of her Clan; but she has cast her duties aside...until she is chosen by a special animal ally, altering her destiny forever. When a deadly attack tears her world apart, Mari reveals the strength of her powers and the forbidden secret of her dual nature as she embarks on a mission to save her people. It is not until Nik, the son of the leader from a rival dominating clan, strays across her path that Mari experiences something she has never felt before.

Now darkness is coming, and with it a force more terrible and destructive than the world has ever seen, leaving Mari to cast the shadows from the earth. By forming a tumultuous alliance with Nik, she must make herself ready. Ready to save her people. Ready to save herself and Nik. Ready to embrace her true destiny and obliterate the forces that threaten to destroy them all.

Amazon Customer
5.0 out of 5 stars excellent
Reviewed in the United States on January 18, 2023
me encanto
Images in this review

Jude Easley
5.0 out of 5 stars Wowed again!
Reviewed in the United States 🇺🇸 on January 19, 2023
Verified Purchase
Pc cast is a beast!!! The way she writes just amazes me. This will be the third world she has created that I have fallen in love with!
Read more
Helpful
Report abuse

Janice Hanley
4.0 out of 5 stars Very enjoyable read.
Reviewed in the United States 🇺🇸 on January 16, 2023
Verified Purchase
This book was different than what I expected and left me ready to continue on the clan and tribes upcoming struggles and adventures.
Read more
Helpful
Report abuse

Ursula Ingar
5.0 out of 5 stars excellent
Reviewed in the United States 🇺🇸 on January 18, 2023
Verified Purchase
me encanto
Read more

Ursula Ingar
5.0 out of 5 stars excellent
Reviewed in the United States 🇺🇸 on January 18, 2023
me encanto
Images in this review

Jackie
5.0 out of 5 stars An awesome read.
Reviewed in the United States 🇺🇸 on November 25, 2022
Verified Purchase
This one of the best books I've read. I love the drama and the lives read about 3 different peoples. Well written. Hope you enjoy it as much as I did.
Read more
Helpful
Report abuse

Payton Stone
3.0 out of 5 stars Good enough to be interested in the second book Sun Warrior
Reviewed in the United States 🇺🇸 on March 25, 2017
Verified Purchase
I want to start by telling you all that when I first heard that P.C. Cast was working on this new series, I was extremely excited. I waited in great anticipation for this book to release. I had it preordered for months. I will admit I heard so many mixed reviews about this book, but I tried really hard to ignore them. The only reason it took me so long to actually read it was because I was intimidated by the page number. 608 pages is A LOT.

Overall, I was slightly disappointed in this book. But it definitely was better than I though it was going to be after the first couple of chapters. I also recently found out the second book in the series is going to be called Sun Warrior and I will be reading that one as well.

My first impression was that the book was kind of boring. Then we moved into Dead Eye’s chapter and I was so utterly disgusted I seriously thought about DNFing the book. I was repulsed by everything is his chapters that I really felt like I just couldn’t move forward with it. He was literally filleting the skin off of a live animal and instead of killing it, left it in complete misery. Like WTF? Some how I managed to push on. Luckily, Dead Eye’s chapters were few and far between over the course of the book.

Thank the Book Heavens above for Nik and The Companions! They were seriously the saving grace for this book. Had it not been for the chapters told from their perspective, I WOULD NOT HAVE FINISHED the book.

In the first chapter from the Companions perspective we get to see a Shepard choose her companion. It was completely intriguing and I loved it so much. And then another one of the litter runs away! The poor pup, I was a worried mess at that point. I know if I lived in this world, I would FOR SURE BE A COMPANION. I have no doubts about that and I would be perfectly content.

One thing I really didn’t like was that there was no explanation of these different types of groups in the books. We just got their classification. For instance, we learn that there are Earth Walkers, Scratchers, Companions, Skin Eaters. It was really confusing. Like later on in the book we find out that Earth Walkers and Scratchers are the same group. It also became apparent that these different groups knew absolutely nothing about each other. I wish she would have have a glossary or taken the time to explain the structure.

I was definitely grateful that the Companions (Tribe of the Trees) took the time to explain how the world in their story came to be. It was quite interesting and really makes you wonder.

The way the different tribes/clans were set up was really weird. It could still use some further explanation in my opinion. But I really hoped their would be a change on the horizon for these groups because of Mari and Nik.

In my opinion, this book had a LOT going on. Maybe too much because most of the book was extremely slow for me. It didn’t even get remotely interesting until like 40% in and thats really late considering how many pages the book is. I feel like this book had so much potential, but it didn’t embrace it until the end.

I’m not sure this review portrays my exact feelings about this book, so I’ll try my best to put them into word here. Like I said, overall I was extremely disappointed in this book. In the beginning I was completely repulsed by this book. Then it redeemed itself and slowly (AND I MEAN SLOWLY) got better. The ending was definitely the best part. I will be continuing the series when the next book is released. However, at this point, I don’t think I will ever re-read this book. Keep in mind I’m not a huge re-reader anyways.

Dea
5.0 out of 5 stars Moon Chosen, Sun Warrior and Wind Riders
Reviewed in the United States 🇺🇸 on September 28, 2022
Verified Purchase
These books are awesome and I would recommend them to anyone 😀
Read more
Helpful
Report abuse

Court
5.0 out of 5 stars Soothing!
Reviewed in the United States 🇺🇸 on August 7, 2022
Verified Purchase
I love the entire vibe of this series, and I'm really looking forward to the 4th book!
Read more
One person found this helpful
Helpful
Report abuse

AlJWMK
5.0 out of 5 stars Amazing
Reviewed in the United States 🇺🇸 on March 7, 2022
Verified Purchase
This is 1 of my new favorites now! I absolutely loved this story; love some of the main characters and the differences in the groups of people...definitely some mean, love-to-hate characters too. Interesting story from beginning to end, well-written, and I couldn't put the book down! I'm starting the next book right away!
Read more
One person found this helpful
Helpful
Report abuse
See all reviews

Nino
5.0 out of 5 stars Best Book I Have Read This Year!!!!!
Reviewed in the United Kingdom 🇬🇧 on December 24, 2017
Verified Purchase
Ever since I came across this author's Partholon series I fell in love with this author's work and the unbelievably magical way that she is able to spin the tale that makes you never want to leave. This book made me love her writing even more!!!! This is the kind of story that you will never forget and one that you will want to read over and over again, you won't be able to put this book down, you just get pulled into its pages and even when you are not reading this book you find yourself thinking about it and you can't wait to get back to it and this why I can honestly say not only is this my favourite book this year but one of my favourite I have ever read and I am super excited about reading the next book!!!!

This book has such an amazing storyline and the characters are so addictive to read about. It is amazing and baffling to me how this author is able to create such a compelling fantasy work that I got hooked on from the first page, it is hard for me to put into words how utterly amazingly this tale really is and how much of an outstanding writer this author is. It has adventure, fear, regret, sorrow, pain, but you also have the warmth of hope and love and the promise of something better. This is a book that makes you feel good because of the spirit of some of the characters, no matter what is going on in their lives.

If I was able to then this book would be getting more than 5* rating from me. This is a book everyone must read, it is mind blowing in how amazing it is!!!!!
Read more
Report abuse

wolfgirl
5.0 out of 5 stars Eonderful
Reviewed in the United Kingdom 🇬🇧 on November 29, 2020
Verified Purchase
Borrowed this book from my daughter in law and just had to get it for myself! Great story.
Read more
Report abuse

Rebecca
4.0 out of 5 stars Emotional, fast pace storyline
Reviewed in the United Kingdom 🇬🇧 on May 9, 2017
Verified Purchase
I enjoyed this book - it really takes you out into the realms of PC Cast's imagination. It's completely different to everything else I've read. It is a emotional, fast pace storyline with lots of characters and different things happening.
Read more
Report abuse

Stephanie M. Kennedy
1.0 out of 5 stars not a typical PC Cast story
Reviewed in the United Kingdom 🇬🇧 on November 18, 2018
Verified Purchase
just too much detail which made the story extremely slow and couldn't catch my imagination
Read more
Report abuse
See all reviews