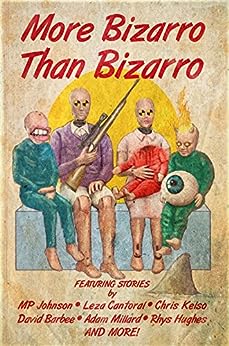 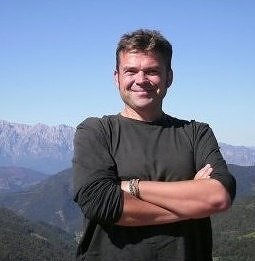 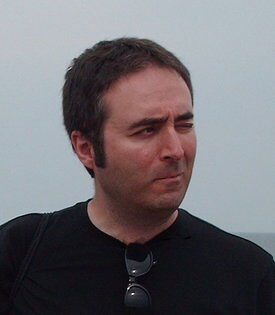 by Leza Cantoral (Author), Christopher Paul (Author), Mandy De Sandra (Author) & 0 more Format: Kindle Edition
See all formats and editions
Sorry, there was a problem loading this page. Try again.
Bizarro Pulp Press presents… A showcase of the written word that represents the best of the weird and the grotesque; More Bizarro Than Bizarro is a gallery of the strange and unusual, including possibly-dead detectives, a beer-head invasion, some especially delicious cookies, the dream of Jackie Kennedy, and of course, the best story of a talking penis ever written in the history of classical literature.
Read more
Previous page
Next page

5.0 out of 5 stars
5 out of 5
10 global ratings
How customer reviews and ratings work

Morgan K Tanner
5.0 out of 5 stars Spectacularly Insane!
Reviewed in the United States 🇺🇸 on October 1, 2017
With a title like this you know you're going to be in store for some crazy, strange, and insanely mental stories. And yes, this anthology doesn't disappoint. In fact I'd go as far as to say there isn't a dud in here. At all. Yeah granted, a couple didn't grab me as much as the rest did, but each and every story here was an enjoyable experience to consume.

Bizarro fiction is never going to be something you can really relate to. Characters act weird, events unfold that you never see coming and don't make much sense. And that's why we love it!

I've never reviewed a collection of stories before and wondered how I'd go about it. How much do I say about each one? Well, you (and I) are about to find out.

Things kick off pretty well with Adam Millard's story Die High Private Eye, in which a private detective is murdered. His ghost then seeks to find out who killed him. When he does (and that's not a spoiler), his method of sweet revenge is genius.

The Great God Problem by Chris Kelso involves iconic Lovecraft character Herbert West coming face-to-face with his creator, or lots of him, to be more precise. Meeting your maker(s) isn't all it's cracked up to be, though.

Rhys Hughes' Mummyfixation takes place in Aegypt, an alternate reality that can be entered whilst venturing through a pyramid in this world's Egypt. In this other place everything is mummified; the sun, the people, even time. And every character is called Carter, obviously.

Odoacer's Coronation by Thomas Olivieri took me a little by surprise, as it's not actually a story, but a two act play. Set in Ancient Rome with out of place yet seemingly 'normal' modern stuff, this play, as the author notes, would be impossible to stage. Oh yeah, and Andy Warhol makes an appearance.

Grant Wamack tells the story of a man meeting with his psychologist in Homesick. Everything seems to be happening as you'd expect, until the man begins to vomit a punk, a hipster, seafood, strippers, and other stuff you would imagine someone vomiting. Pretty bizarre, eh?

The Best Story About a Talking Penis Ever Written by Pedro Proenca is exactly that. On title alone it's just what you'd expect in an anthology like this. It's about a man who's destiny is to write a great story about a cock. Seems obvious really. There's also a plane made out of a hippo.

Christoph Paul wrote A Gnostic Prayer to Escape Christoph Paul's Body, although I'm not sure he really did. A spirit inhabiting his body has been responsible for his past works and it grows tired of him now he's writing YA rubbish. Surely there must be another host out there somewhere.

Stilton Dreams by Konstantine Paradias tells the story of family conflict against a common, evil enemy. What's so bizarre about that? The family are rodents and the evil is a cat.

Tom Leins' Here Comes That Weird Chill had me head scratching at the end. A man is hired to solve a strange mystery by some kind of secret society-type thing. But he doesn't. I think. Or does he? He might have done.

Malari's Arc by Carter Rydyr was great. Imagine the Noah's Ark story but with blood instead of water. Strange, starfish-like creatures with many appendages (and even a sex appendage – genius) argue about the merits of worshipping The Goddess. I loved this one, the ending was perfect. Plus there was some great artwork of the creatures. This was my favourite so far.

Matthew J Hall tells the tale of a man infatuated with his own shadow in My Feminine Side. However, his shadow only drives him wild at a particular time of day when the light is just right. He pictures his perfect life with this woman (it's a feminine-looking shadow by the way), but it's not so perfect after all.

Spiderpartment by Alexander Zelenyj was another pick for me. A couple discover they live next door to an apartment inhabited by millions of spiders. But it's cool, bro. I really enjoyed this one.

And now, we come to my personal favourite of the whole collection. Bone Addict by John Wayne Comunale was everything I was looking for here. It was gross, funny, and sad. A man is addicted to the taste of his own bones. Mmmm they taste so good. I won't say any more because you really need to read this for yourself. I was eating my sandwich while I read it, and it tasted excellent!

DJ Tyrer's The Bypass seemed to be going so well and un-bizarre, as a group of hippies protest against a new road being built. Then the last of the Druids turns up with the same goal, although his reason for saving the trees is very different to the hippies'. The plan they come up with to sabotage the construction is pretty special.

The Place of No Context by John Allen recounts possibly the strangest job interview ever. This one didn't really wow me as much as others but again, I enjoyed it. This is one to re-read I think.

A man becomes obsessed with a bag of trash in The Most Beautiful Bag of Trash in the World by Daniel Vlasaty. But it seems that this bag of household waste is looking for more than love. Yeah, it wants to obliterate life, as trash does.

The Owlheads Stalk at Midnight by David Barbee was a really creepy tale. A young girl wakes to find feathers growing on her face. Things go downhill from there. Strangers emerge from the woods with owls for heads (the clue's in the title). I found this one pretty unsettling, and loved it.

Nick Cato had me chuckling away with The Small Intestines of Lower Manhattan. The new intern pastor at the local church finds a strange box there. Meanwhile his wife, owner of the Laundromat, has a visit from a customer who's either a Satanist, or a vampire, or neither of those. I don't want to say too much, but the tall man was great. A really funny story.

Rise of the Corpse Eaters by Aric Sundquist asks the question what if cookies and other baked desserts attacked us humans? Well, you can find out by reading, of course.

First we had owls for heads and now it's beer cans. In Beer Heads by MP Johnson a beer journalist (what a job!) breaks into a brewery to find out exactly what that secret ingredient is in that delicious ale. He ends up wishing he hadn't bothered. The ending here was another gem.

And finally, Saint Jackie by Leza Cantoral. Now I don't mind admitting it, but this one confused me. Was it a tragic fairy story? A drug-induced nightmare? The inner thoughts of a schizophrenic? I'm not sure, but the imagery it conjured up was definitely in keeping with the bizarre theme. A great, if confusing sign off to this great collection.

So as you can probably tell, this anthology was superb. I highly recommend it to bizarro aficionados as well as those new to the genre.

If you've read any of the brief synopses above and thought, 'hmm, that sounds interesting,' you're going to love it, just like I did.
Read more
4 people found this helpful
Helpful
Report abuse

Daniel
5.0 out of 5 stars Regarding Stilton Dreams
Reviewed in the United States 🇺🇸 on February 28, 2021
Verified Purchase
Constantine Paradias' story was amazing. I knew he wrote well but I was shocked by the mastery. Thank you for this beautiful writing, an old friend from kamenoi, Aggeliki.
Read more
Helpful
Report abuse
See all reviews
Report an issue
Does this item contain inappropriate content?
Report
Do you believe that this item violates a copyright?
Report
Does this item contain quality or formatting issues?
Report