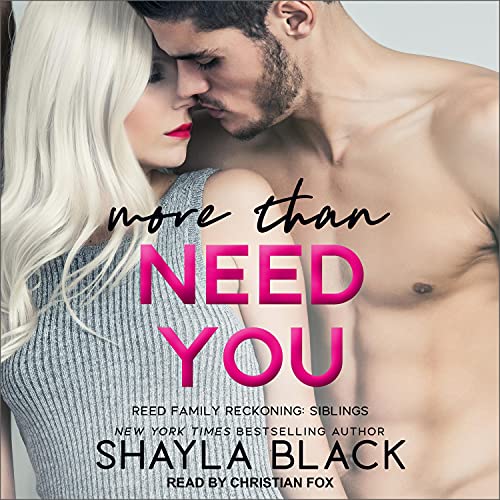 I'm Griffin Reed - cutthroat entrepreneur and competitive bastard. Trust is a four-letter word, and everyone is disposable...except Britta Stone. Three years ago she was my everything before I stupidly threw her away. I thought I'd paid for my sin in misery - until I learned we have a son. Finding out she's engaged to a bore who's rushing her to the altar pisses me off even more. I intend to win her back and raise our boy. I'll have to get ruthless, of course. Luckily that's one of my most singular talents. Sixty days. That's what I'm asking the gritty, independent single mother to give me - 24/7. Under my roof. And, if I have my way, in my bed. Britta says she wants nothing to do with me. But her body language and passionate kisses make her a liar. Now all I have to do is coax her into surrendering to the old magic between us. Once I have her right where I want her, I'll do whatever it takes to prove I more than need her.

Special invitation from Audible!
Learn more about Membership
List Price: $30.09
You Save: $4.14 (14%)
By completing your purchase, you agree to Audible’s Conditions Of Use
Sold and delivered by Audible, an Amazon company

Amazon Customer
5.0 out of 5 stars Griffin and Britta pretty much ripped my heart out.
Reviewed in the United States on March 18, 2020
Griffin and Britta pretty much ripped my heart out. Through the whole story, I was right there with Griffin begging her to hear his pleas. I understood her side of it really but I also saw his. Add in that sweet precious boy and I melted.Oh, man, did I want to get in between them and yell "Stop! Listen!". :)I admire the creative ways he pushed her to try again. I loved all the sneakiness behind the scenes with Maxon, Keeley, and Harlow. I almost lost it with the morning-after scene.But true to Shayla Black's way with words, she pulled them out of the fire in a spectacular way! And saved my sanity in the process. ;)
Images in this review

Christine
5.0 out of 5 stars Just keeps getting better!!!
Reviewed in the United States on June 13, 2017
Verified Purchase
More Than Need You is part of the series More Than Words and that is the perfect way to explain the theme for this book. A relationship is built and destroyed and rebuilt again on more than words. It takes love, anger, forgiveness and happiness. This book has it all.

Griff is amazing even with all his faults. He made a huge mistake 3 years ago and ruined the most important relationships in his life. He has the sins of his parents on his shoulders and that has continued to eat away at him and affect his relationships with the people who are closest to him. Griff wants to be a better man for Britta but it doesn't happen overnight. And he has a lot to learn.

Britta is the love that Griff pushed away. There is a lot of reasons why Griff did what he did but Britta now wants to protect herself and her son. She doesn't want to put herself in the same position to get hurt again. Plus so much time has passed that old wounds have festered and she doesn't know how they can heal.

Keeley and Maxon also give great advice to Griff, especially Keeley. She is a force to be reckoned with. She gives Griff something he desperately needs, a friend. She is that ear that all of us need from time to time and she isn't afraid to tell Griff that his is being stupid.

I love this book!!! It has all the elements that takes you on an emotional rollercoaster. I really adored Griff. Make no mistake, he has his moments where you want to tell him off but he had a chance to look inside himself to become something more than his father. I understand Britta in the way that she didn't want to put her heart on the line again and just so much time had passed.

I also really love how music is weaved throughout this story and series. I can tell how important music is to Shayla Black. She is really knowledgable and her playlist is amazing and fits perfectly to the mood and tone of the book.

We also get some insight about Harlow and the man she is about to marry. The bothers are already expressing their thoughts. I can't wait!!!

Shadow
5.0 out of 5 stars Emotional but satisfying story
Reviewed in the United States on March 25, 2019
Verified Purchase
This was a highly emotional story, about a man whose past and hot temper led him to turn away from his brother and his girlfriend, not knowing his girl was pregnant with his son.
Griff Reed blew up over a misunderstanding and lost everyone who meant anything to him. He turned to a counselor, who was useless to him-but the therapist’s receptionist became his best friend-and his brother’s girlfriend. She engineered a reconciliation with his brother, who informs him that Griff’s ex had his son a little over two years ago.
Once Griff learns he’s a father, he heads straight to confront Britta-only to find himself crashing her engagement party to another man.
Britta understandably doesn’t want anything to do with the man who dumped her and refused to listen when she tried to tell him she was pregnant. But Griff is determined to claim not only his son, but the only woman who ever meant anything to him.
Can these two people, both suffering from betrayal, come together in a relationship, or has the past cause too much damage?
I loved both Griff and Britta. Griff is a bit ruthless, but his need for someone like Britta is part of his entire being. Britta is a caring, loving mother and understandably tries to protect her son and her own heart, but she realizes her own mistakes as well.
Overall, a most enjoyable read, with great characters and plot.
Read more
One person found this helpful
Helpful
Report abuse

Sharon_M
VINE VOICE
4.0 out of 5 stars Love the book and audio!
Reviewed in the United States on March 1, 2018
Verified Purchase
More Than Need You, the second novel in the More Than Words series by Shayla Black is Griffin Reed and Britta’s story. Like book one I purchased the audiobook immediately after I finished reading the e-book and began listening to the words in Christian Fox’s voice.
I read a lot of books about characters with dark or damaged paths. As a matter of fact, I’m drawn to them. It doesn’t matter to me if it is the hero, the heroine, or both. There is something about the characters as they learn to trust and deal with their past. Griffin Reed is the dark character in this book.

If you read the first book, you know a little about the way Griff treated his former girlfriend, Britta. Knowing what he did, I wasn’t sure if he was salvageable for me. I wasn’t sure Shayla could convince me that Griff is worth forgiving. More than Need You picks up parallel with the ending of More Than Want You. With the parallel scenes, the reader experiences some of the final events from Griff’s perspective.

More Than Need You is well written from Griff’s point of view. Maxon and Keeley are also present. Keeley was a friend of Griff’s for a couple years and still works to help him, and Britta repairs their past. I love that her communication is still through music. For me, Griff redeems himself quite nicely. More is revealed about the Reed’s parents and the life Griff had as a teen. It is sad that a person who appears to have all the opportunities afforded an upper-class family, but in reality, he is used by both parents. His father uses him against his brother, and his mother uses him to get an in with some influential women.

Britta is a lovely character. Her priority is her son. Rightfully so, she doesn’t trust Griff not to hurt her again, and she fears he will leave his son if he has contact. It is confusing that Brita held onto the hope that he would come back and makes the decision to move on just as he does. He wants to explain, but she doesn’t really listen. Honestly, who can blame her?

One of my favorite aspects of Shayla’s characters is how believable they are. I can see where a person conditioned to wait for every person in their life to serve up betrayal that s/he turns away. This is Griff I believe that the other person in the relationship will have a hard time giving that person the benefit of the doubt. I’m team Harlow on this point and agree that Britta set Griff up and Griff failed.

Shayla Black takes us on a realistic journey of love, loss and a second chance to get it right. She guides these characters on a frustrating journey of pain and heartbreak, but the characters don’t give up. There are many moments of joy especially when both characters are in parent mode. I love experiencing all the “feels” with these characters. While this is the second book in the series, it easily stands on its own. Everything you need to know is presented here. The conclusion of More Than Need You gives the reader a solid ending while whetting the appetite for the next book where Harlow will reveal her story. Can’t wait!

Audio Book Review
This is the second book I’ve listened to with Christian Fox as narrator. He does an excellent job. At first, I thought he might throw me off as I recently heard him telling Maxon’s story. It didn’t. I dropped right into Griff’s trials as interpreted by Christian. I highly recommend More Than Need You as an audiobook for all audio fans. Brilliantly done!
Read more
3 people found this helpful
Helpful
Report abuse
See all reviews