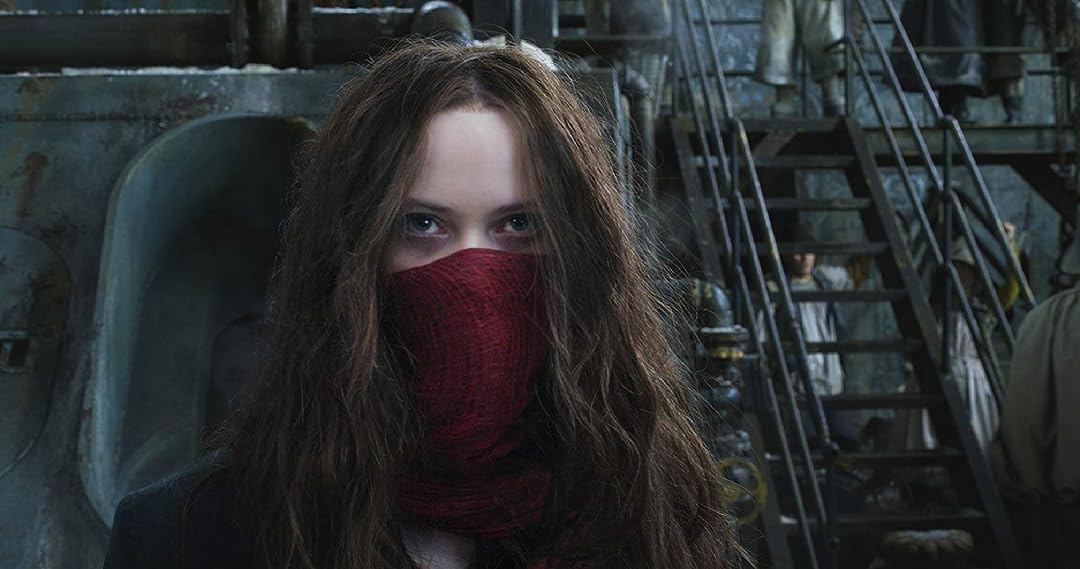 (15,789)
6.12 h 8 min2018X-RayPG-13
Peter Jackson presents a world unlike any you've seen. A young woman leads a band of outcasts to stop London, a predator city on wheels, from devouring everything in its path.

Deik017Reviewed in the United States on December 19, 2018
5.0 out of 5 stars
Like foreign flicks with a side of Mad Max and a dash of Star Wars? Then start your Mortal Engines!
This will definitely be a day 1 buy for me. I'm not familiar with the books, but I watched this as a huge fan of weta digital, Peter Jackson, Phillipa Boyens and Fran Walsh. Expectations were low and I came out pleasantly surprised. So let's get into the details.

THE GOOD
Well, I'll state the obvious that there are a lot of gorgeous visuals and impressive set design. This is one of those movies that's designed to be on a big screen. The story is an allegory for imperialism, greed and desire to conquer even when there's nothing to gain. It features classic tropes and cliches that make up most of the fabric of shared stories.

I loved Hera Hilmar as Hester Shaw, the protagonist. She maintained an excellent balance of tough and vulnerable. I absolutely believed every word and emotion she expressed and hope to see her in a sequel!

The movie even introduces a CGI b-villain that made me groan, and it turned out to be the most emotionally satisfying part of the film!

It's core tale featuring vengeance and adventure, makes it feel like a Japanese revenge film. It also has a very straightforward, no nonsense pacing that reminds me of adventure flicks of the 80s. The movie doesn't try to bog you down with too much detail, lore and world building. It just wants to tell a simple hero's journey in the vein of Mad Max, Star Wars and anime movies. However, that's both it's strength and weakness.

THE BAD
The movie needs more lore and world building. While I still fully enjoyed the themes and visual storytelling, many people are reasonably disappointed with the lack of exposition about how the world works. Pair this with an abundance of cliches (which I thought the movie handled and owned well) and you have a flick that will appear to be just like every other YA movie to the untrained eye. I can confidently say this is much, much better than just about every YA movie, however, don't expect your nit picky questions to be answered. All in all, I could tell the book probably has a lot more info, but they likely didn't want this to be 3 hours like Lord of the Rings (I do).

However, the main character who matters, Hester Shaw is given thorough development and leaves you satisfied with her journey and arc.

THE UGLY
The movie is getting far too much hate. It's currently around 28% on rotten tomatoes and it deserves better. I would gage this as more of a 65%-70% movie. My honest review would be 4 stars, but I gave it an extra star because of the undeserved hate.

All in all, I say go see this and hope for an extended cut!

The Movie GuyReviewed in the United States on December 21, 2018
3.0 out of 5 stars
Food of the ancients is indestructable
The opening scene, I was thinking "Wild Wild West" meets "Mad Max." and later I had to toss in "Star Wars" and Monty Python's "The Crimson Permanent Assurance." seriously.

The script was not tight and I apologize for PLOT SPOILERS. The setting comes about after an Earth crust shift, followed by "The 60 Minute War" with quantum energy (whatever that is) and then at some time there was the even less described "Nomad Wars."

The city of London is on tank tracks and travels slowly across the land devouring other mobile cities in its wake because it can as it robs them of their resources. Valentine (Hugo Weaving) controls the city and has been quietly making a weapon because running them over is not enough.

I am not sure what they had in mind making Elrond as Darth Vadar. They had guns, so the sword fighting confused me. This wasn't LOTR. The role of Kate (Leila George) starts off as if she was going to play a major role, and she was simply a spectator...like Ivanka watching her dad destroy the world. Oh yeah, then there was a dead guy whose partial conscientiousness was inside of a killer robot. He was also after Hester (Hera Hilmar) the main female lead. I guess going after a guy with a quantum machine who wants you dead is not enough. Of course the "Luke, I am your father" scene made me hurl chunks.

They make fun of modern politics with family separation and Twinkies that are still fresh after 1,000 years. Light humor.

The film had great scenes, but they simply tried to cram too much into 2 hours.
110 people found this helpful

alistairvilleReviewed in the United States on February 21, 2019
5.0 out of 5 stars
Beautiful, excellent production, Good concept - worth your time.
Verified purchase
A gorgeous movie - although it needed a bit more exposition - but a most enjoyable fantasy romp. Intellectually barren - but otherwise good. Acting good, photography great, artistic direction wonderful, appropriate costumes - everything good - but slightly less brains than you’d hope for in the writing. However, there have been bad reviews of this movie. Truly, it is an amazingly fun film to watch. It’s better than the bad reviews.
59 people found this helpful

Alexander O. TeitzReviewed in the United States on December 17, 2018
4.0 out of 5 stars
Steampunk Imagined Onscreen
I'm writing this after opening weekend where the film failed to meet expectations. I went opening night. Some friends had told me about the film last year and I was intrigued enough that I read the book months before going. The film is different from the book. The ending is changed.
When I first heard of the casting I was most skeptical of Anna Fang & Valentine. I imagined they differently. Seeing the film I think the casting was right. There are many things the movie gets right in detail. I wish there had been time to flesh out more of the side characters like Kate & Bemis.
Overall this is a fun action film that is a live action mix of Miyazaki meets Road Warrior. I think it was worth the price and hope it surprises at the box office.
98 people found this helpful

Turtle the WiseReviewed in the United States on February 20, 2019
3.0 out of 5 stars
Why mobile cities by the way?
Verified purchase
The landscape is not dystopian, so I do not understand the need for these mobile cities. That said, the movie is pretty, the acting is decent, and the story elements were pretty good. Everything just seems grander for no good reason other than spending tons of money. Also, why not just make this movie rated R? Thousand of people are killed in this. One scene involves a man's head being blown off followed by a sword fight that leaves a bunch of dudes dead. This is already carnage, just rate it appropriately. The nuclear robot was cool though.
37 people found this helpful

ViaVeritasReviewed in the United States on March 14, 2019
1.0 out of 5 stars
Epic Failure
Verified purchase
Epic failure by Peter Jackson, characters are completely underdeveloped, storyline moves way too fast, extremely cheesy plot twists and terrible anticlimactic dialogue. Nothing about this movie ever draws you in and makes you feel emotionally connected, Jackson tried to fit what should have been a 4 hour movie into 2 hours. Each characters story is only briefly told and the viewer is forced to fill in the blanks with their own imagination. Nothing is explained in detail, the world is destroyed,televisions no longer exist,yet somehow they have the technology to build entire mobile cities that can support thousands of people. Don't waste your money or time on this pathetic excuse for a futuristic action thriller.
30 people found this helpful

Amazon CustomerReviewed in the United States on February 22, 2019
3.0 out of 5 stars
Rental at best - kind of boring, but good VFX
Verified purchase
The story was not that good. The movie is visually dark. It took a lot of skill to make the movie, but eh. Good to rent once. Sorry I bought it.
38 people found this helpful

JCReviewed in the United States on March 16, 2019
2.0 out of 5 stars
Somewhat expected dissapointment
Verified purchase
A "steam punk" themed movie with very good special effects and a VERY borrowed story line (I won't spoil it with examples). The action is non-nonsensical and the theme is peppered with subtle leftist-type social leanings and racism (all of the "bad" people are mostly of European decent and want to destroy all of the "good" people who are mostly not of European decent). There is also a reference to separating immigrant children from their parents, an attempt to subversively opine on the crisis at the U.S. southern border.

If you are looking for a visually pleasing movie with great action that you can shut your brain off and enjoy, this one's for you. If you enjoy using your brain, you may want to pass.
21 people found this helpful
See all reviews
Back to top
Get to Know Us
Make Money with Us
Amazon Payment Products
Let Us Help You
EnglishChoose a language for shopping. United StatesChoose a country/region for shopping.
© 1996-2021, Amazon.com, Inc. or its affiliates