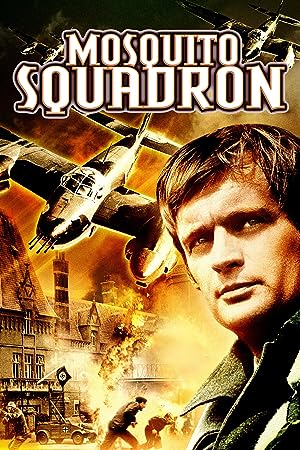 (306)
5.71 h 30 min1970G
A RAF pilot learns that the Nazis are developing a rocket at a site in France where British POWs are being held and devises a plan with two goals: free the prisoners and destroy the rocket project.

BAT-505Reviewed in the United States on November 19, 2021
2.0 out of 5 stars
The movie was based on a actual mission..BUT..SEE MY REVIEW..
Verified purchase
This movie WAS based on a actual
Mission ..to free those prisoners...because they we're ALL
..going to be executed in a few days..at first they were just going to bomb this Nazi prison until they found out about all the prisoners there that were going to be slaughtered..and needed a fighting chance to escape..so with the help from underground fighters.. the mosquito Pilots where told to accurately bomb and blow a hole in the wall for their escape and afterwards the prison was completely bomb out..
But this film was made a few years after another mosquito movie called 633 Squadron and they used a lot of cuts from that movie to make this movie with including a scene or two from the Battle of Britain..and but mostly seems taken from 633 Squadron..if you have that movie
" 633 SQUADRON " you will truly see most of their air action edited into this movie..so yes this movie was CHEAPLY DONE..AND THATS THE REASON FOR ONLY 2 STARS..
AND ALSO YOU COULD SEE THE BLACK WIRES ON THE MODEL PLANES ..AS THEY WENT ALONG THE SKY'S ON FIRE..SO YES..THIS IS A ONE TIME WATCH FILM..AND THEN,. ON.THE SHELF IT GO'S
ESPECIALLY IF YOU HAVE THE MOVIE "633 SQUADRON "...AFTER
THIS I'LL JUST STICK TO WATCHING HISTORY documentary films of the mosquito...for it was truly a plane
Ahead of its time..and was the fastest accurate multi tasking/ prop DRIVEN AIRCRAFT.....IN THE WORLD ...AT
THAT TIME IN HISTORY for Britain and the world during ww2.
FASTER THEN THE P-51 ,THE SPIRIT FIRE ,AND THE 109'S..
Check it out on YOUTUBE.YOU WILL LOVE WHAT you see..because these movies do not give this wooden wounder..its
Proper respect..the plane itself..
Deserves the medal of Honor..
..END OF REVIEW..

joel wingReviewed in the United States on September 12, 2021
2.0 out of 5 stars
Writers couldn't control themselves and threw in too many sub plots
Verified purchase
David McCallum is the commander of a Royal Air Force squadron tasked with destroying a new Nazi rocket site during World War II. The film used a mix of real Mosquito planes and models. If they’d just stuck to them this film would’ve been good but they didn’t. They threw in a love story with twist being that McCallum falls for his dead best friend’s wife! Then there’s another subplot about what’s going on at the German base that’s going to be bombed. It just seems like the writers couldn’t control themselves and wanted to throw in all kinds of stuff and ruined the movie as a result.
One person found this helpful

abcdReviewed in the United States on September 30, 2021
3.0 out of 5 stars
It never was a good movie
Verified purchase
Unlike 633 Squadron, which was a good movie in it's day, Mosquito Squadron was very B-movie when it came out. I was a 13 year old kid when they shot the Chateau scenes at Minley Manor in Hampshire UK.
We were allowed to wander the set, and watch the wall blow up with the resistance attacking. A German soldier extra got shouted at for letting me pose for a photo with his SMG loaded with blanks.

Donald L. PhillipsReviewed in the United States on October 29, 2016
4.0 out of 5 stars
If you were a pilot you'll love it!
Verified purchase
Excellent WW II War movie with some first-class-flying sequences.
5 people found this helpful

Mark ShanksReviewed in the United States on June 19, 2003
2.0 out of 5 stars
A mediocre stew of every WWII-flick cliche - don't bother
Verified purchase
David McCallum, in the initial stages of his long slide down and out after his "Man From U.N.C.L.E" stint, stars in this hopelessly cliched WWII flying flick. As "Quint Munroe", he watches his Squadron Leader-wingman crash and burn. But wait - that wasn't just his Squadron Leader - it's his sort-of-brother! (Don't ask.) Crushed with guilt and remorse, his duty is to tell the dead pilot's wife. But wait - not only was this his best-friend and sort-of-brother's wife, she was HIS girlfriend first! Next, he must tell the pilot's parents, who are his sort-of-parents. Phew. What emotions all this raise, in everyone EXCEPT McCallum, who must have taken stiff-acting lessons from a fence-post.

Naturally McCallum takes over the squadron, and naturally, they are selected for one of those "only you can do it" missions, this time taking out a "V3 and "V4" launch site/plant. Someone had watched "Dambusters" once too often, because they decide that the best approach is to use the "Barnes Wallis" spinning bomb - on a land target. But wait - in an entirely predictable plot-thickener, a German pilot literally drops a bit of info on them that gives them pause in their plans.

OK, I stand second to NO one in my love of flying movies and Mosquitos are at the very top of my list. (Go read my review of "633 Squadron", please.) These just don't hack it, and the "outside cockpit" shots are really awful. The plot is tired, the acting is a cypher, and you know, I couldn't even be bothered to finish it. It's nice to see real airplanes instead of CGI (how long, o lord, how long will we be afflicted with THAT gimmick?), but it simply isn't worth it in THIS flick. Watch "633 Squadron" or "Battle of Britain" or "Dambusters" or "12 O'Clock High" or......you get the idea.
9 people found this helpful

Amazon CustomerReviewed in the United States on August 2, 2020
5.0 out of 5 stars
Great War movie.
Verified purchase
I like those old warmonger a lot .thanks.

Stephen J VitolanoReviewed in the United States on April 23, 2017
4.0 out of 5 stars
Four Stars
Verified purchase
I am a pilot and I enjoy watching the low altitude flying
One person found this helpful
See all reviews
Back to top
Get to Know Us
Make Money with Us
Amazon Payment Products
Let Us Help You
EnglishChoose a language for shopping. United StatesChoose a country/region for shopping.
© 1996-2022, Amazon.com, Inc. or its affiliates