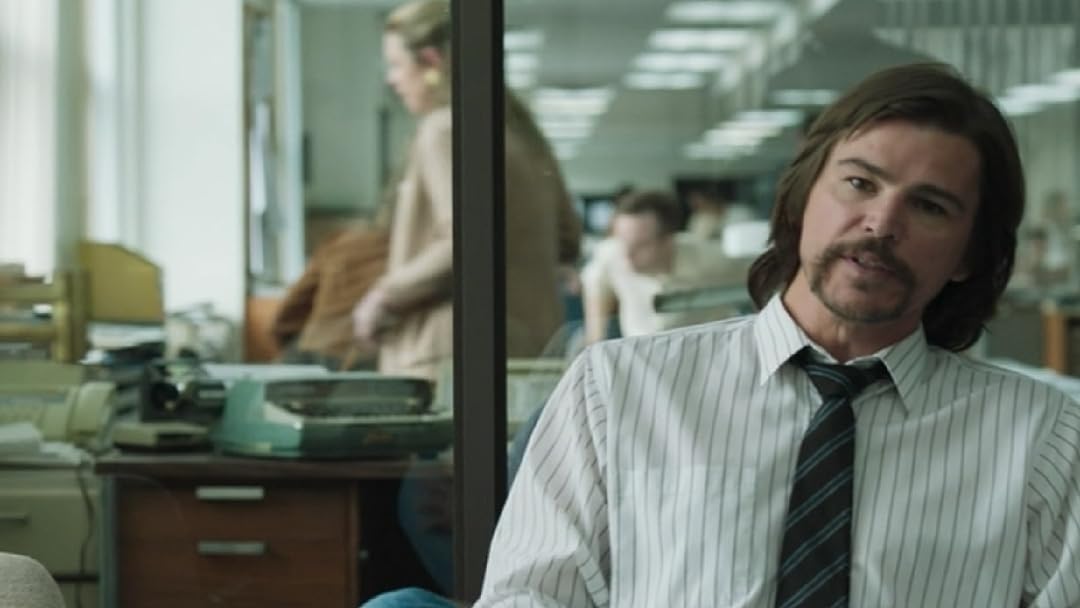 (9,844)
6.22 h 4 min2020X-RayR
Inspired by a gripping true story, an investigative reporter (Josh Hartnett) fights to expose the twisted truth behind a heroin bust orchestrated by dirty cops to frame an innocent man – sentencing him to life in a Thai prison.

Scott MeltonReviewed in the United States on July 26, 2020
4.0 out of 5 stars
Do you like crime dramas?...
Verified purchase
Pretty good crime drama. Great acting and really good plot that is based on a true story. Josh Hartnett was awesome as usual, Jim Gaffigan actually surprised me how well he did in a dramatic role (and thank goodness he didn't say "Hot pockets" not one time Haha) and Antoine Olivier Pilon was absolutely amazing. I don't recall ever seeing Pilon before but I'm looking forward to seeing more movies from him. If you like crime dramas and movies where someone is in prison unjustly and trying to get released you will love this movie!!!
31 people found this helpful

EPIReviewed in the United States on December 30, 2020
5.0 out of 5 stars
Its a shame that atrocities committed by police are only known upon making a movie of them...
Verified purchase
In the US it is well known but now also in Canada that the police and criminal justice system is nothing more and nothing less than the worst, most atrocious, and largest organized domestic terrorist organization in human history.
Police, District Attorneys, and the entire multi-billion dollar industry aimed at terrorizing good citizens, breaking their own laws, and being the worst criminals of our modern history.

It is such a shame that these acts of barbaric, illegal, inhumanity are only known when enough information gets out and a movie can be made of it.

There are no worse criminals in the modern world than the "criminal justice" system of the USA - and apparently its rubbed off on the neighbors to the north in some effect too.
Even nazis, who were justifiably killed without mercy, were not as bad as these lowest of human scum......but who will wage war against the state when the ones with badges and guns are the worst terrorist criminals of all?

I can only give 5 stars to anyone brave enough to shed a light on the worst criminals of human history, the greatest enemies of good, civilization, and everyday people.

MercuryReviewed in the United States on July 29, 2020
4.0 out of 5 stars
Corrupt cops betray the system for profit but lose everything in the end.
Verified purchase
Intriguing low budget film written and and directed by Daniel Roby goes back to 1989, and uses a series of flashbacks to guide us through the dark and twisted story of a sleazy drug dealer and a young, misguided addict. The movie has two separate intersecting stories one of the junkie Daniel (Antoine-Olivier Pilon), who wants to score and the investigative reporter Victor Malerek (Josh Hartnett), who fights to expose the real events behind a heroin bust organized by dirty cops so Daniel could take the fall. Victor is a confrontational journalist who neglects family and coworkers. Unfortunately for the movie, it keeps returning to Victor's marital and professional problems, which makes the film slow and disjointed in areas that should have been cut.

Daniel is lured to his doom in Thailand by a group of crooked cops is sentenced to 100 years in a Thai prison on a charge of trying to smuggle heroin out of the country. Thailand part of the Golden Triangle, produces an opium poppy crop that supplies much of the world's heroin. Daniel has a great deal of time to discover consquences of his addictions during an imprisonment for over eight years. The prison scenes are heavy on violence and corruption inside the system as Daniel fights to survive his ordeaI. I am reminded of Midnight Express (1978, Columbia). The low level drug dealer who got Daniel involved was a bit slow and obvious, it is hard to believe that someone would be that desperate and dumb to fall for his line of deception, but as I got into the film it held my interest to see if Daniel would beat the system that set him up. Most Wanted is a good crime suspence drama, three and a half stars, recommended.
13 people found this helpful

Eric WarrenReviewed in the United States on August 16, 2020
3.0 out of 5 stars
Serviceable "True Life" Thriller
Verified purchase
I mainly watched this because it had Josh Hartnett, who I have loved in Penny Dreadful (yes, I was a bit late to that party), and also Jim Gaffigan. Also, I have been watching the great Canuck crime drama, "Cardinal" so I am a bit obsessed with finding out how things aren't always so peaceful in the Great White North.

Main plot of this "Based on True Events" story is a poor sucker junkie gets ensnared in what is basically one of the most ludicrous cases of Entrapment in history - or at least in Canadian History. This kid is just looking to get high, and the Jim Gaffigan character convinces him to fly to Thailand to score ten kilos of "H" as they so uncooly call it. This, all financed and supported by the Canuck version of the DEA, masterminded on the Government side by a rail-thin, specter of an agent, played by Stephen McHattie (who all of you X Files fans will recognize).

If it sounds implausible, it probably is, because the notes at the end confusingly indicate that maybe this all happened, maybe it didn't. Mainly, because apparently the Canadian Government has sought for years to suppress the truth. Except, the film was financed, in part, by Provencal bucks from the Government of Quebec. Oh, right, Quebec has been trying to secede from Canada for decades.

OK, back to the film. Everything here is pretty effective, pretty well-written and well-acted. Only problem is the time shift narrative only becomes apparent about a third of the way through, when you realize that you are watching a retrospective of historical events, and a current timeline of our pitiful junk getting ready to rot in a horrible Thai prison.

You'll have to watch to find out what really happens.
7 people found this helpful

linda galellaReviewed in the United States on May 19, 2021
4.0 out of 5 stars
Based on a true story,
Verified purchase
MOST WANTED is a film that Canada has tried to suppress, apparently for years.

A young addict is convinced to participate in drug trafficking deal where he is set up to be the pawn by both the Canadian police and the police in Thailand. He’s caught and taken to court where he doesn’t understand the process and ends up sentenced to 100 years.

The case comes to the attention of an investigative reporter who’s on his last chance with the Canadian paper, GLOBE & MAIL. He convinces his boss to send him to Thailand, (after inquiries to the government prove questionable), and the movie takes off.

It is confusing to begin with due to dual timelines. Once the background begins to get established and you become more familiar with each setting, the movie flows better. It flows better but you’re going to need to pay attention. This is a case filled with subterfuge; no wonder Canada tried to keep it hidden!

Josh Hartnett, Jim Gaffigan, Stephen McHattie and Antoine Pilon are all very good in there roles. I’ve never seen Pilon before but expect he will be seen plenty in the future. The conditions were awful and violence was extreme, all of which he portrayed very convincingly. Hartnett’s character was going thru a complete life crisis that he also did an amazing job of integrating into his character; really fine acting.

Some of the camera work is rough. I’m not sure if that’s the operator, editing or conditions they were under but it’s distracting at times. I’d make a similar comment about the soundtrack. It’s noticeable in a way that I didn’t find enjoyable.

For sure, a movie for grown ups. Intelligent, well acted and not full of agenda items🍿

Rick C.Reviewed in the United States on July 26, 2020
1.0 out of 5 stars
Boring
Verified purchase
Boring. Drug on. Hard to follow. Would not have watched it had my 18 month old son not ordered it and pressed play before we knew what was happening.
9 people found this helpful

RaisedRightInBrooklyn62FYReviewed in the United States on July 25, 2020
1.0 out of 5 stars
BORING
Verified purchase
wasted 6.99 on this..darn
9 people found this helpful

SweetpeaReviewed in the United States on August 30, 2021
5.0 out of 5 stars
Integrity
Verified purchase
Bide through the opening score and you'll have a good movie to watch. I hated that beginning "music" so bad. It grated on my nerves and I just wanted it to stop. Thankfully, suddenly, it does. It's well acted and based on a true story. It would probably help to have read a book first to know who the nefarious officers are when first introduced, but I do like that it left them mysterious, too. Unbelieveable stakes for greed! And unbelieveable abuse of someone who just needed a real heart to help him. It's very well acted. I was really impressed. I guess I just didn't quite expect this in a Canadian set movie (forgive me)!

Not only was the movie well done (except for the into score), I was very impressed by the caliber of courage, and fortitude, of both the victim and his rescuer. I didn't like that the young man imprisoned in Thailand attributed his help to Zen Buddhism, but then again -- I had to go through my bout of that false teaching, too. I believe Sidhartha would have believed in Jesus Christ had he known about Him, anyway. But, by far, the most impressive character was the journalist. Victor's integrity and courage reminded me of the Vernon Johns story.
One person found this helpful
See all reviews
Back to top
Get to Know Us
Make Money with Us
Amazon Payment Products
Let Us Help You
EnglishChoose a language for shopping. United StatesChoose a country/region for shopping.
© 1996-2022, Amazon.com, Inc. or its affiliates