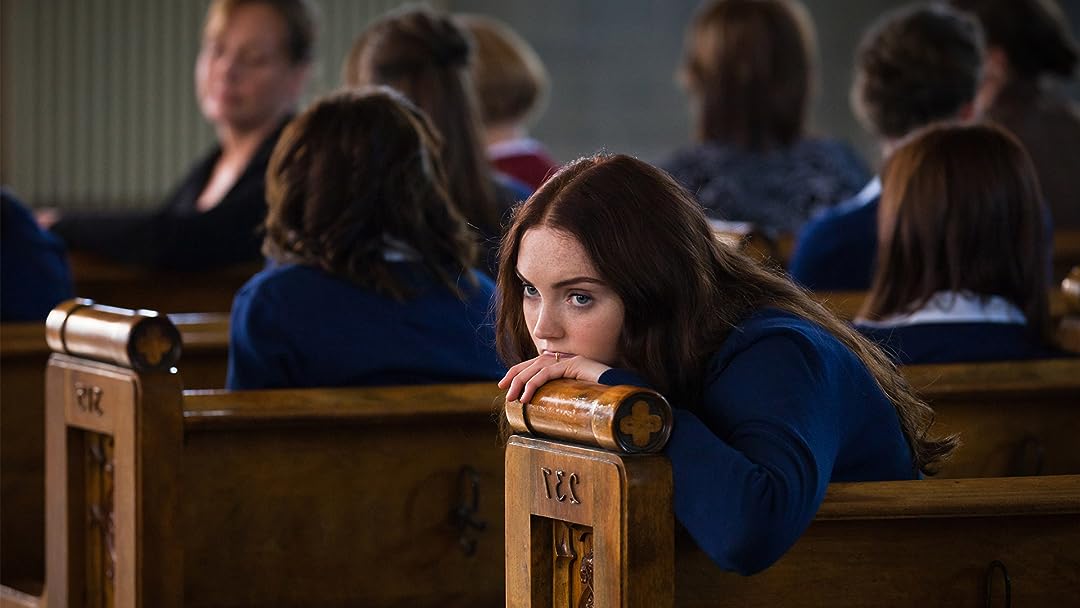 (259)
4.91 h 22 min2012X-RayR
Acclaimed director Mary Harron (AMERICAN PSYCHO, THE NOTORIOUS BETTIE PAGE) returns with the chilling story of Rebecca (Sarah Bolger), a young girl who, haunted by her father's suicide, enrolls in an elite boarding school for girls. Before long, Rebecca's friendship with the popular Lucy (Sarah Gadon) is shattered by the arrival of a dark and mysterious new student named Ernessa (Lily Cole).

Frosty Cold OneReviewed in the United States on May 9, 2016
4.0 out of 5 stars
A vampire story, or one of mental illness?? [Blu-ray review]
Verified purchase
The historical mythos of the vampire reveals certain constants among disparate cultures, such as the supernatural draining of a person's life force. The Moth Diaries features only one such undead parasite, leading to deaths at Brangwyn girls' boarding school. The dying is real, but what is the real reason behind the dying? In the mind of a troubled student named Rebecca (the protagonist), the newest student Ernessa is no mere mortal threat to her friends and social fabric.
The school also has a new teacher, Mr. Davies (Scott Speedman, who vampire film enthusiasts will recognize from the [[ASIN:B007FFUMKQ Underworld]] series), and in one amusing scene he discusses the history of vampires in literature (nearly breaking the fourth wall in the process), mentioning how they all contain sex, blood, and death... The Moth Diaries is no exception to this trio of themes.

** Disclaimer **
The Moth Diaries is a book that can be enjoyed by a wider audience than the movie, which seems as catering to two incongruous viewerships (horror fans and teen/tween girls), with the likely result that neither will be completely satisfied. The book, which thrives on ambiguity, begins with the protagonist as an adult introducing us to her diary written 30 years ago (she was institutionalized after writing it). Director / screenwriter Mary Harron decided to instead have the protagonist be a teen in contemporary times, which seems an unfortunate choice from a non-marketing standpoint. Despite this disappointment and struggling through some scenes only a girl could love, female vampire stories are my favorite in the genre, so my rating may be inflated for that fact.

PROs
✔ When Ernessa first appears onscreen, her face is striking enough that you intuit danger from the get go. British actress and model Lily Cole has an oddly small mouth, or perhaps it just appears so due to her Betty Boop round face with saucer eyes and prominent eyebrows (grandly threatening when they are dyed black, as here).
✔ Despite all her pouting and jealous posturing, you’d have to be heartless not to empathize with—or at least feel some degree of sympathy for—Rebecca (portrayed by Sarah Bolger, who is a boon to the flick regardless of the sloppy script). She has an adversarial relationship with razor blades due to the negative thinking she encounters (exasperated by remembering her father's suicide), and as the narrative progresses Rebecca finds herself with fewer and fewer allies, to the point where she is alone facing her madness (or Ernessa, if you believe vampires are real).
✔ In addition to the strong cast, notable director Mary Harron is at the helm. Despite my complaint above (in the Disclaimer), she gets so much right in terms of shooting.

CONs
✘ A departure from the book did not do the movie any favors. A missed opportunity.
✘ Forcefulness replaces subtlety in too many instances.
✘ I can't speak for horror fans, but I've read enough written by them to guess that most will not be pleased by this film; for one thing, it isn't particularly scary, and there's a noticeable absence of bloodsucking and gore.

💿 The Blu-ray transfer looks great, and is accompanied by an excellent audio track. The extras are better than nothing, and include:
🎥 Behind the Scenes (~18 minutes): in 1080p. Cast and crew, including bigwigs like the author of The Moth Diaries (I was glad to hear from her re: the film adaptation).
🎥 Video Diaries (~13 minutes): in standard definition. Focus on the cast, especially Sarah Bolger putting into context the locations, sets, and props.

Dee Reviewed in the United States on June 28, 2020
3.0 out of 5 stars
Modern Dracula for Tween Goths
Verified purchase
A Gothic teen story that combines "Carmilla" by J. Sheridan Le Fanu and "Dracula" by Bram Stoker and places it in a modern day girls boarding school.
Some details are unmistakeable. The Beautiful and privileged Lucy, best friend of the troubled heroine, and her gradual downfall at the hands of the vampire are taken (almost too) directly out of "Dracula".

I think this is better viewed as a fantasy film, rather than a horror. For example, there is no way that 3 deaths in 1 and 1/2 semesters would not be taken more seriously by a school. It is not possible that (after massive blood loss) Lucy's blood labs would have normalized and that she would have just been discharged and just dropped back off at school. No way would an exclusive school have absolutely no security cameras and/or staff etc etc. Also, I did not really get the significance of the pervy teacher, except that she thought they had a deeper connection....but they didn't.
So, if watched as a fantasy, or a young woman's descent into murderous madness, it's a great teen movie!

Z HayesReviewed in the United States on July 8, 2013
4.0 out of 5 stars
Engaging psyhological horror
Verified purchase
Mr. Davies: "In all of the classic Gothic horror stories we see anxiety about female power, female sexuality. A mysterious stranger begins to take over the narrator." Mr. Davies is the attractive new English teacher at the exclusive Branwyn Boarding School for Girls and this quote kind of summarizes what THE MOTH DIARIES is about.
When Rebecca (Sarah Bolger) arrives at the exclusive prep school for a new school year, she finds an enigmatic new girl, Ernessa (Lily Cole) and is a little perturbed as Ernessa slowly infiltrates Rebecca’s inner circle of good friends. Rebecca has a lot on her plate – she is still not quite over the tragic suicide of her poet father and now finds her closest friend Lucy (Sarah Gadon) falling under the spell of this new girl. Soon, strange things begin happening: girls from Rebecca’s circle fall prey to mishaps and tragedies and as the death count rises, Rebecca frantically tries to figure out what exactly is going on, and who is to blame.
If you are familiar with Sheridan Le Fanu’s CARMILLA, you might see some parallels in this film. I found THE MOTH DIARIES to be an engaging, suspenseful film that although appears to cater more to a teen audience, still has some depth to it that should appeal to a more mature audience. The viewer is left wondering if supernatural forces are indeed at work or if the tragic occurrences are more to do with an unbalanced mind. The Gothic elements add to the high atmosphere throughout the film.
4 people found this helpful

Sunny Von TepperoffReviewed in the United States on January 17, 2015
5.0 out of 5 stars
So different for a Vampire movie & not tweeny; no offense. Cool, interesting, well acted & unusual
Verified purchase
This is a vampire movie not like most others.It s not typical and well acted, directed, filmed & has a great plot. Loved all the characters...Lily Cole does a great job!! She is eerie and interesting. Scott Speedman was much more enjoyable in the 1st "Underworld" , but he does make good eye candy if you're going to an all girl's school.
I also like the movie's scenes where they make comparisons to the book "Carmilla" by J. Sheridan Le Fanu. Carmilla is a female vampire character written before Stoker's "Dracula". It is also an unusual & interesting read.
I liked the music as well. The opening song By Bombs in a Birdcage is very upbeat as well as setting the tone. I especially liked the ending song "Numb" by Marina & the Diamonds, which also sets the tone at the end perfectly!
Cool movie to watch no matter what your age & I am definitely over 30.
3 people found this helpful

AninaReviewed in the United States on May 19, 2017
4.0 out of 5 stars
A Good Rainy Day Movie
Verified purchase
I really like this movie! It's a supernatural thriller, regarding a particular magical moth. This moth draws people into another world. Now the antagonist in the story, is a young woman who may or may not be dead that is a moth. I don't want to give away to much. What I was hoping for was more of a back story and the other characters, as to why she wanted them. The ending was completed but I felt there was more or could have been more. I did enjoy it, I will watch again.
2 people found this helpful

ViraReviewed in the United States on September 8, 2013
4.0 out of 5 stars
Young Adult Ghost Story
Verified purchase
I would not call this horror as I did not find the movie to be at all scary or even a slightly causing goose-bumps. I would say it is along the lines of a thriller or a good ghost story. It reminds me of a young adult coming-of-age story with a ghost twist; light sexual content and an easy-to-follow plot. If you aren't looking for a really frightening show and can take a tiny bit of "red paint" blood imagery then this is for you. The scenes are definitely attractive and the characters are relate-able. I enjoyed the ending even if it was a little bit of a cliff-hanger as a few strings will be left a mystery.

Cons: Not scary or even "jumpy," story is not very complex and stays in the realm of pre-teen or young adult content

Shari Lyne DuShaneReviewed in the United States on March 31, 2014
4.0 out of 5 stars
Decent flick
Verified purchase
Teenage angst is a fairly common theme in books and movies these days, and I must say this one was done quite well. At first blush it feels as if the movie is slow paced and simply plodding along, until you allow your mind to wander and you realize all of the subtle nuances your subconscious has been picking up. This movie is more than a simple girly teen flick, there is psychological impact inside of this story. Lily Cole was excellent in her role as the new girl; she portrayed a definite creepiness, using minute facial movements and deadpan stares that were still filled with menace. Sarah Bolger did a wonderful job in her role, and left me wondering if she would find the strength to deal or if she would crack up; I would have liked to see more of Valerie Tian and Melissa Farman, too. I enjoyed the movie and would recommend it.
2 people found this helpful

Wingless WizardReviewed in the United States on August 23, 2020
4.0 out of 5 stars
Good thriller film
Verified purchase
While not a great film, the heroine is a lovely actress and the other actors.actresses were good. The ending was a little brief for me, but I still enjoyed the movie.
See all reviews
Back to top
Get to Know Us
Make Money with Us
Amazon Payment Products
Let Us Help You
EnglishChoose a language for shopping. United StatesChoose a country/region for shopping.
© 1996-2021, Amazon.com, Inc. or its affiliates