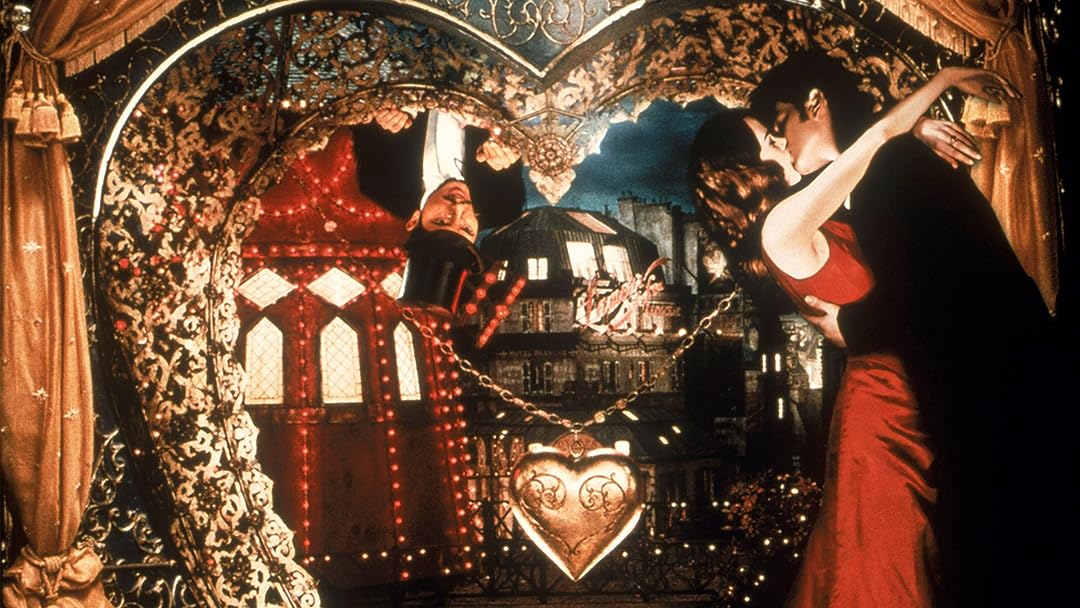 (11,785)
7.62 h 8 min2001X-Ray13+
A celebration of love and creative inspiration takes place in the infamous, gaudy and glamorous Parisian nightclub, at the cusp of the 20th century. A young poet (Ewan McGregor), who is plunged into the heady world of Moulin Rouge, begins a passionate affair with the club's most notorious and beautiful star (Nicole Kidman).

Daniel JolleyReviewed in the United States on April 21, 2003
5.0 out of 5 stars
A breathtakingly beautiful and unique love story
Verified purchase
I absolutely love Moulin Rouge. I have never seen anything at all like this movie; it is nothing short of indescribable. Previews and descriptions offer only the smallest glimpse into the epic world of intense human emotion, amazing sets, and incredible music that is Moulin Rouge. The setting is Paris in 1900, where the Moulin Rouge is the place to be, a spectacularly unreal world wherein inhibitions are left at the door and beauty, truth, freedom, and love are pursued on an epic scale. Ewan McGregor plays Christian, a young, idealistic, penniless poet who has come to Paris to embrace the bohemian spirit flourishing there. He soon finds himself writing songs for a lavish production alongside a truly unforgettable cast of characters led by Toulouse Lautrec (John Leguizamo). His new friends are awestruck by the lines and lyrics he comes up with, all of which are drawn from the pop culture of our own modern day. A shot of absinthe and a vision of the Green Fairy (played by the lovely Kylie Minogue) later, he finds himself inside Moulin Rouge. Harold Zidler (Jim Broadbent) leads the way for one of the most lavish musical production numbers ever created on film, topped off by the appearance of Satine (Nicole Kidman) on a huge swing above the amazingly enthusiastic audience. Despite the odds, Christian and Satine fall in love, but they must keep their love hidden because the club's wealthy patron, The Duke (Richard Roxburgh), wants Satine for himself and is willing to make her the real actress she longs to be in return for her affections. I was rather surprised to discover such a deeply emotional tale at the heart of this movie; it is a beautiful but tragic love story that outshines even the incredibly lavish production numbers for which this film is most famous.
I love musicals, but I had come to doubt the ability of modern moviemakers to make one worth seeing. What director Baz Luhrmann has done is to actually reinvent the musical as audiences know it. It sounds strange to say that the music for a movie set in 1900 consists of modern pop, opera, hip-hop, and other songs of the late twentieth century, but it really works beautifully and draws the modern viewer more deeply into the world of "real artificiality" Luhrmann succeeded in creating. If you had asked my thoughts on having two guys who look like David Spade and Rip Taylor singing Madonna's Like a Virgin in a movie, I would have laughed you out the door, yet it actually works in Moulin Rouge. Each of the terrific songs included here does serve rather than detract from the story itself. Ewan McGregor and Nicole Kidman do actually sing their own songs, it is important to note, and I was amazed to discover that Kidman's singing voice is as beautiful as she is herself. Dialogue alone could never manufacture the power unleashed by the music of Moulin Rouge, and the great tragedy of the story is made even more poignant by songs such as the haunting Come What May. Don't think this movie uses its garish production numbers as a means of hiding a weak story because the love story of Christian and Satine is nothing short of breathtaking, heartbreaking, and somehow wondrously beautiful all at the same time.
A terrific movie deserves a terrific DVD release, and Moulin Rouge features more extras than I could even watch all at once. When you watch the movie, you will marvel at the sets and costumes and wonder how on earth this movie was made. There are features on just about every aspect of the making of Moulin Rouge included on Disc Two. I love the commentaries and interviews, but what I really love are the uncut dance sequences. The dance numbers in this movie are just beautiful and beyond amazing, but they cannot be shown uncut in the film itself because things are happening story-wise at the same time and those scenes take precedence over the dances. Here, not only can you watch each of these musical production numbers in its completeness, you can even watch each one from multiple camera angles.
I know there are some people who dismiss this movie out of hand because it is a musical or because the hedonistic themes revealed in the movie previews give the impression of gaudiness over substance. This is not a musical in the traditional sense of the word, and the sets, while opulently lavish, are actually less stunning than the plot itself. This is a love story for the ages, sprinkled with comedy but dominated by the deepest of human emotions. Even though I was interested in this movie from the time it was released, I myself did not expect story itself to be as powerful and moving as it is. Moulin Rouge is, in almost every conceivable way, one of the best motion pictures I have ever seen.

ChristopherReviewed in the United States on September 5, 2022
5.0 out of 5 stars
Great value
Verified purchase
The DVD played well and was clear.

mahensReviewed in the United States on August 23, 2022
5.0 out of 5 stars
Excellent movie
Verified purchase
Entertainment!

Cara FReviewed in the United States on March 8, 2022
5.0 out of 5 stars
Favorite movie of all time
Verified purchase
This has been my favorite movie of all time.
it is ME in a nutshell. The color, the music, the cinematography, the grain, the editing, the choreography, the passion, the art, the architecture, the pure raw talent, the over acting, the masking, the comedy, the tragedy, the love. the sacrifice.

no movie will ever top this, and I will take it personally and judge you if you dont like it. only movie to ever make me feel that way.

it really sucks people don't appreciate art. it is the true meaning of beauty, truth freedom and love.

the greatest thing you'll ever learn, is just to love. and be loved in return.

HOW DO YOU HATE THAT MESSAGE?

barryReviewed in the United States on February 18, 2011
5.0 out of 5 stars
Moulin Rouge on blu ray - amazing!!
Verified purchase
Moulin Rouge was already a film with a huge cult following before its appearance on blu ray. A blu ray transfer of a film when done correctly is an amazing experience and raises a films clarity and quality stratospheres of levels. But when not done well a film can even look worse than the dvd. So for a film as lush and dynamic as Moulin Rouge it would seem it was made for blu ray. So - how does it look and sound? There are no words to describe how amazing it is. This film truly was made for blu ray and all its qualities are made that much better.
Moulin Rouge may not be for everyone's taste but it is truly an artistic masterpiece made with great ambition. That cannot be denied. It is a big, bold and clever extravaganza. It also miraculously used top 40 tunes from various decades to tell a beautiful, romantic love story and in the process bring the musical back to a place of relevance. Old and new comes together and visually and musically the film soars from beginning to end. The cast is superb with major star turns by Ewan McGregor and Nicole Kidman. Tour de force performasnces by both.

Now to the blu ray transfer. The video is truly a stunning presentation here and shows blu ray to its true best capability. The colors are so vibrant and seem to jump off the screen. The black levels, skin tones and overall clarity of picture are just truly amazing. And then you add in the audio which would either make or break this film. Well rest easy Moulin Rouge fans for the audio is rich and expansive. Dialogue is very strong and clear and the music takes a life of its own. This beautiful audio transfer makes use of all the speakers even when there is no music. This blu ray presentation honestly will make you feel as if you are inside Moulin Rouge. With this movie music and its use in a film are also brought to a new level. The film is magical, creative and a truly romantic fantasy experience. The blu ray transfer is beautiful and makes this a must have for fans and will definitely bring new admirers to this movie through its magic. Highly recommended.
19 people found this helpful

Amazon CustomerReviewed in the United States on June 2, 2022
5.0 out of 5 stars
One of my favs
Verified purchase
Moulin Rouge is one of my favorite musicals!!! Love the love story, the dancing, the music, and actors!
One person found this helpful

Forest NymphReviewed in the United States on December 18, 2021
4.0 out of 5 stars
Still Good but the Opening Montage Has Aged Poorly
Verified purchase
The overall film is bright, beautiful, romantic, and well-written but that ridiculous opening montage about ten minutes into the film - which blends music throughout the 20th century with a club scene more befitting the early 2000s than the late 1800s - strikes me as a bit obnoxious two decades later, especially since I had been maybe 20 the first time I saw Moulin Rouge in the theater, and closer to middle-age now it all seems cheap and gauche.

MeganReviewed in the United States on November 28, 2021
5.0 out of 5 stars
Love it or hate it
Verified purchase
You will either love this movie or hate it. Don't watch it if you have a headache. Don't knock it 'til you try it. For myself, this movie will always hold a special place in my heart. I have watched it multiple times over the years through many different stages of life and have always come away with something new. Freedom, beauty, truth and love. Most of all love. Matters of the heart becoming ideas and conveyed through art are bound to be written off as foolishness by the jaded amongst us-the many dukes and maharajahs will not tolerate this film past its exposition. The penniless writers, however, will resonate with the emotions of Moulin Rouge.
5 people found this helpful
See all reviews
Back to top
Get to Know Us
Make Money with Us
Amazon Payment Products
Let Us Help You
EnglishChoose a language for shopping. United StatesChoose a country/region for shopping.
© 1996-2022, Amazon.com, Inc. or its affiliates