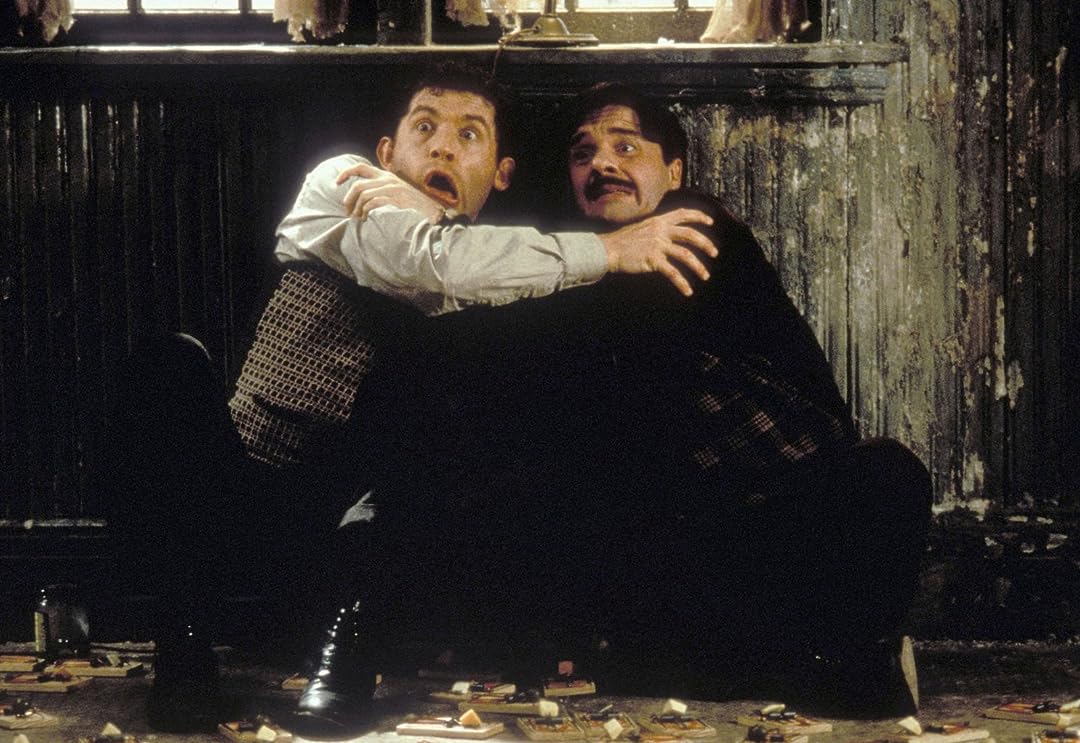 Ivan David LippensReviewed in the United States on June 20, 2018
5.0 out of 5 stars
An Underrated Masterpiece of Comedy!
Verified purchase
I tend to give most films a low rating, so when I give a production four or five stars, it's only because it is truly exemplary.
Mouse Hunt is a Big-Time Underrated Comedic Classic.

This is Clean Comedy that outperforms the majority of the comedic films on the market.
The style is very akin to Looney Toons, in many ways.

A lot of physical comedy, and the main characters are constantly running into funny and unusual scenarios that they have to escape.
There are some minor weaknesses, here and there, but the main focus of the movie is so well-done that it's easy to forgive anything less than perfect.

The two brothers are VERY well cast, and there are at least a few moments where I found myself laughing-out-loud. :)
Christopher Walken also makes a brief appearance, as a minor character, but provides a lot of substance to the movie.

This is Probably One of the Top 5 Best Comedies Ever Made.
Or at least Top 10.

Tanis Coralee LeonhardiReviewed in the United States on December 13, 2019
5.0 out of 5 stars
Still a Classic!
Verified purchase
We had this movie on VHS when I was a kid and I finally got back around to watching it now. It has the cutest main character ever, the mouse even tucks itself into bed :). For that mouse home is home and he is staying, time is not a variable. I vote for twine over cord and who says a coin has to land heads or tails only! Also love that the cat trapped in the wooden box breaks the box to get out, sounds about right.
7 people found this helpful

Desert RatReviewed in the United States on April 9, 2021
5.0 out of 5 stars
Fun movie
Verified purchase
Critics did not seem to like this. Based on box office results a lot of viewers disagreed with the critics. I had never heard of it. Stumbled on it just by accident. Not high art but very fun to watch. Leaves you with smile on your face. Billed as a “family” move but take care- there are a few gags that some parents might raise an eyebrow over.

After it wrapped up I realized that in a number of ways this is a classic haunted house monster movie even if the monster is a cute mouse.
One person found this helpful

smiley faceReviewed in the United States on February 13, 2019
5.0 out of 5 stars
Nathan Lane is superb as always.
Verified purchase
This is a silly slapstick comedy but it will make you laugh. It is a sweet movie. Nathan Lane and Christopher Walkin as the mouse exterminator knock it out of the ball park. You will watch this movie again with friends or family so it is worth adding to your collection.
7 people found this helpful

Stephen C. WardReviewed in the United States on December 28, 2016
5.0 out of 5 stars
Slapstick at its very best!
Verified purchase
What's not to love about this movie? I've seen it twice before over the years, and I watched it twice this weekend, once with my 5 year old grandson, and once with all 6 of the family. You will love it if you liked "Home Alone" and enjoy the physical, slapstick humor of "The Three Stooges". The plot is humorously constructed and the characters are typecast caricatures. The sets are awesome, and the action looks so real, you will wonder how it was created. I thought it was one of the best comedies I had ever seen when I first saw it almost 20 years ago, and I enjoyed it just as much today! Yes, it is silly, but you will laugh until you cry!
14 people found this helpful

chris2011Reviewed in the United States on March 19, 2017
4.0 out of 5 stars
Good family fun in the long run!!!
Verified purchase
This is a great comedy and I believe the first dream works movie produced. It is a dark comedy and stars Nathan lane and has Christopher walken. The two brothers the smuntzs are trying to remodel a house as well as get rid of a mouse in the house.

As usual in these things chaos ensues. There is at first a falling of grace and then redemption at the end. While I wouldn't call it family friendly they don't have a lot of cursing and such.

The movie was at the cutting edge as far as special effects go at the time of release. It is good movie when one is feeling low. I believe it is Nathan's finest showing and honestly I am not a big fan of his.
7 people found this helpful

Scholar MamaReviewed in the United States on March 24, 2017
5.0 out of 5 stars
Rent without fear, and listen for your children's laughter!
Verified purchase
Made the children laugh so much, I watched them watch the movie! It was a delight to hear their little chortles and guffaws. They loved it! And, I loved the message that even little things have power, if they use their smarts. I think that's a great take-away!
14 people found this helpful

EinsatzReviewed in the United States on July 4, 2013
5.0 out of 5 stars
"I don't think we're dealing with an ordinary mouse."
Verified purchase
Brilliant. A savagely funny battle of wills between a poor little mouse and two dimwitted brothers down on their luck.

It takes a great deal of ingenuity to turn a much hated rodent into a lovable little hero (of sorts). Rodents are never appreciated under the best of circumstances. In this context, you actually find yourself cheering for him. The attempts to kill the intruder are varied and many, from a psychotic cat that can't be killed (Catzilla) to an expert exterminator (played to perfection by Christopher Walken). Everything they try backfires in an ever escalating fashion. "This is how accidents happen." One brother observes. Boy, is he ever right! And even though they believe they can outsmart the mouse ("I like to use both sides of my brain."), bad luck and their own incompetence constantly gets in their way.

Yes, the premise is limited to the title, this is a movie about hunting down and killing a mouse. But limited or succinct doesn't automatically mean it isn't a well made farce. This movie is filled with bizarre pantomime, marvelous sight gags, and great dialog. It's a delight. It never fails to cheer me up every time I watch it. It's definitely one of my favorite Nathan Lane movies.
11 people found this helpful
See all reviews
Back to top
Get to Know Us
Make Money with Us
Amazon Payment Products
Let Us Help You
EnglishChoose a language for shopping. United StatesChoose a country/region for shopping.
© 1996-2021, Amazon.com, Inc. or its affiliates