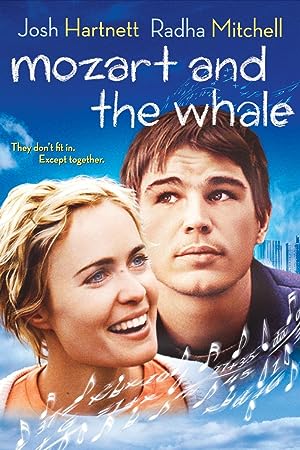 Mozart And The Whale

(246)
6.81 h 34 min2006PG-13
Starring Josh Hartnett and Radha Mitchell (Silent Hill, Man on Fire), Mozart and the Whale is a heartwarming romantic drama inspired by the true story of two people with Asperger's Syndrome (a form of autism).

SpyglassReviewed in the United States on October 4, 2019
5.0 out of 5 stars
Great movie about the goods and bads of autism
Verified purchase
When I first saw this movie a year ago, I didn’t like it, specifically because I found Isabelle to be pushy and controlling. But I decided to watch it again just recently, and my feelings have completely changed! Mozart and the Whale is the best movie about people with Asperger's that I've ever seen. The screenwriters, producers, and actors did an incredible job researching the complexities and intricacies of autism and what it's like to live with it. It shows how different everyone on the spectrum is, and how autistic people can struggle to understand the behaviors of other autistic people despite having the same disorder.

More about Isabelle: my initial impression of her was way off! She essentially becomes Donald's caregiver as well as his girlfriend. It's very important to understand this as you watch the film. Donald is a very disabled young man who struggles in particular with problems stemming from executive functioning--it's the reason he can focus for hours on math and whales but can't focus any attention on cleaning his house, which is why he lives in filth (this is a very common problem for autistic people who have trouble with working memory). It's also almost impossible for Donald to make any kind of significant changes in his life or break from his everyday rituals, even small ones, even slightly. This is why he goes berserk with panic when Isabelle cleans his apartment and why she has to twist his arm to go to a job interview. He cannot do these things on his own and would have continued to live a very lonely, dissatisfied life if she hadn't shown up and fallen in love with him. Honestly, he should have been living in a group home before he met her.

Isabelle changes Donald's life by challenging him and being there for him and helping him do the things he can't do on his own. Considering that she's autistic herself, looking after him the way she does is truly remarkable and incredibly selfless.

This is a beautiful film that everyone should watch!

AaronReviewed in the United States on August 21, 2018
2.0 out of 5 stars
Inner Dialogues Shouted Out Loud
Verified purchase
In an attempt to show normies what goes on in the minds of people with high functioning autism, everyone just shouts out all of their inner dialogues at the top of their lungs. And they're really over the top about it.

I suppose it wouldn't be a very good movie if it only portrayed what real people actually show to the world. This is because normies would watch it and would have no idea what's going on in those people's minds (in the same way they don't in the real world.)

But by presenting it in this way, it makes it seem like people with high functioning autism actually do shout out their feelings and thoughts for everyone to hear. I think a far more effective method would be to show what real people do and say, and then add subtitles for what they're actually feeling and thinking.
8 people found this helpful

LodestarReviewed in the United States on September 16, 2018
2.0 out of 5 stars
Inconsistant male chases female who is all over the place narrative
Verified purchase
I thought that the writing was okay. There was whit and a basic understanding of Autism Spectrum Disorders, but the characters were not believable in the role largely due to the poor acting. This is certainly not the new Rain Man or even Rain Man lite.

I also cannot tell you how tired I have become of the same old directionless female that is impossible to please while the guy plays the most supporting of supporting roles and it still isn't enough. He can do no right and she can do no wrong all the while he makes sacrifices for her and she sacrifices him for her. Sounds normal and fair right?
3 people found this helpful

Lu LuceReviewed in the United States on April 13, 2017
5.0 out of 5 stars
A 51yr old Experienced Aspie's Review
Verified purchase
After a literal emotional, mental, and [what really sucks as an additional] financial breakdown at age 48, after a 30+yr microbiology & micro software career, & what seemed an eternity altho merely MY lifetime wondering wth is WRONG WITH ME??? , I was finally diagnosed Aspergers. Revelation came very late as I come to understand many of my peers also experience as I finally lost out to my lifetime struggle with being so "different" was ultimately brought on by my having not one, but two sons diagnosed on the spectrum at ages 15 & 16. Only a year apart, when puberty kicked in with all the forces of testosterone, what had always been pretty traumatic & difficult turned all but impossible.

I'll spare the emotionally draining loss of all hope & eventual fairly complete loss of most abilities to function adequately in this world for an altogether opposite sentiment: acceptance.

This movie, while not all that similar to my own journey, revealed just enough to bring this aspie a sense of peace in the concept of not being alone. To which I feel a necessity to add: whether or not one is on the spectrum, and despite the fact autism is known to induce a range of FEELING totally alone in the world in those afflicted - to virtually EXISTING in loneliness for the duration of (our) journey, there IS ONE THING all should understand from not only this movie, but thousands of others: what ALL humans, autistic & not desire and NEED is to NOT feel all alone in this world.

This movie does a decent job at insuring one sample set of society understand that altho we feel very different and in fact, VERY alone in our world, we are not .... and there CAN BE great solace in the acceptance of (what society labels this disorder 2b named) having autism, and NOT labeling oneself as BEING autistic. Ultimately, we ALL have developmental disabilities in various forms and we ALL NEED to feel included, not alone and that we MATTER! This movie simply calls attention to the one of seemingly endless ways human beings FIND to separate, rather than include each other from the very human condition which makes us all of a common species of human beings.

The movie brought this aspie some validation and for a time afterwards, not alone. For that, I am grateful and give 5 stars.
8 people found this helpful

Gerrit De FeyterReviewed in the United States on July 4, 2015
5.0 out of 5 stars
A perfectly portrayed autism love story
Verified purchase
I have Asperger Syndrome myself so this movie, a truly autistic love story based on a true story, was very special for me. Unlike many other films or books about autism related subjects, this film comes across very realistic and very appealing. Fellow Aspies will recognise themselves in the characters, whereas for people less familiar with the autism spectrum it will be a great introduction to it. The characters in the film are all very well portrayed and the actors and actresses do a great job to show all those tiny Asperger traits. As if they studied what Asperger Syndrome means before they chose to accept their roles. Each character in the film shows different aspie traits, showing the diversity amongst the people in the autism spectrum. Even the two main characters, the introverted numbers-obsessed and very shy Donald, and the extroverted in-your-face eccentric personality of Isabelle, are very different despite both having Asperger. This film is a great introduction to the autistic world for those who aren't familiar with it, and very recognisable for those already familiar with it or having Asperger Syndrome themselves. The end of the film is very emotionally touching too (without releasing a spoiler!)
9 people found this helpful

AndyReviewed in the United States on December 16, 2013
5.0 out of 5 stars
Do us all a favor. And buy and watch this movie!
Verified purchase
A disability advocates favorite aspie movie ! And I've seen them all if they are in or subtitled in English. This ones in English. But, can be subtitled in French or Spanish. I've watched this numerous times and I watch VERY few movies more then once. I'm a young adult aspie who requires all my serious prospective and new boyfriends to watch this, regardless of if there different or not too. It's based off a true story and I've met the character Josh Harnett plays in real life. This is true to what happened in reality. And I defiantly recommend this HIGHLY.
2 people found this helpful

DrJulieConnorReviewed in the United States on October 12, 2018
4.0 out of 5 stars
Mozart & the Whale was a sweet film
Verified purchase
Mozart & the Whale was a charming film which reveals how those on the autism spectrum share relationships. The lead characters were particularly compelling and well played.
See all reviews
Back to top
Get to Know Us
Make Money with Us
Amazon Payment Products
Let Us Help You
EnglishChoose a language for shopping. United StatesChoose a country/region for shopping.
© 1996-2022, Amazon.com, Inc. or its affiliates