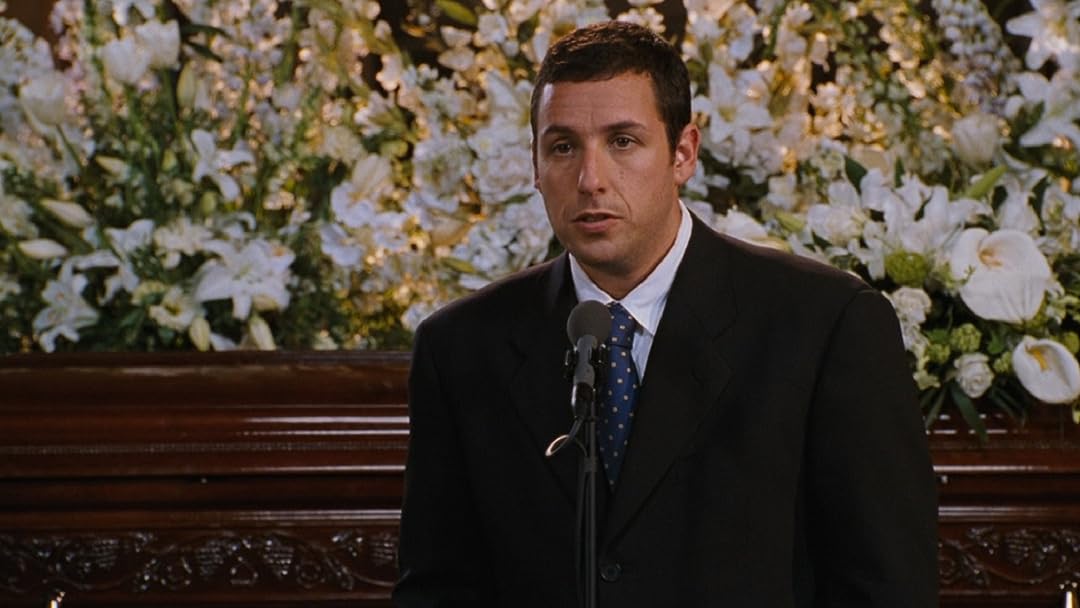 joel wingReviewed in the United States on December 12, 2021
3.0 out of 5 stars
Movie is such an odd mix So predictable and corny yet still funny
Verified purchase
Mr. Deeds is a really weird film. It’s a comedy featuring Adam Sandler as a small town guy who inherits a fortune. That part is not only completely predictable but also incredibly cheesy. He wants to help everyone and doesn’t like the big city people. It’s like a Disney after school special in parts. It had me shaking my head at how corny it could get. The comedy though is really good. A lot of it is physical jokes like cats being thrown out a burning building by Sandler and bouncing all over the neighborhood or Sandler trying to put his frozen dead uncle into a coffin. It’s bizarre how they could get some good comedy writers who were also so horrible at creating drama.

kathleen mckeonReviewed in the United States on June 21, 2015
4.0 out of 5 stars
It's like a family hug.
Verified purchase
Sweet, clean, good family fun. Agree with the other reviewers who say Emilio the butler steals the show. He's great. Just the right mix of creepy (in good clean fun) and intriguing.

I would watch this once. If I had to entertain kids of a variety of ages, I'd watch it a 2nd possibly 3rd time. Then I'd need 5+ years to forget it. It's a good family movie. A few good laugh moments. No rip-roarious laugh moments, but good chuckles.

Side note: now that I lived in NYC for 4+ years . . . it's amazing just how much I see the BS of the "Inside Access" show seemingly at play in the reporting in NYC. Is everyone totally full of sh*t here? What is wrong with this city?!?

Carol VigliantiReviewed in the United States on September 6, 2021
5.0 out of 5 stars
Must have!
Verified purchase
If you like Adam Sandler you need this! I know it's an older movie but I'm replacing all my vhs with dvd's. My husband recorded thos from regular tv but anyone who knows movies, ya just can't watch Adam Sandler with commercials! Price was perfect too!!

teols2016Reviewed in the United States on October 11, 2013
5.0 out of 5 stars
Adam Sandler As We Knew Him Then
Verified purchase
I've always thought that Adam Sandler's earlier roles were his better ones. Here, he plays a lovable, niaeve, hopeless romantic who manages a pizza parlor in a small New Hampshire town and suddenly finds himself as the sole heir to a fortune that would put a considerable dent in our country's national debt. Throughout this film, Mr. Sandler proves my point as I continuesly find myself having no trouble wishing the best for his character as he adjusts to being probably the richest man in America (maybe I'm just sucking up for a cut of the dough.) Then, there is also the fact that this film has a solid story to tell rather than just give Mr. Sandler an oppurtunity to spout weird jokes. The supporting cast was all wonderful. Peter Galliger was the perfect slimey, self-serving business man and Conchata Ferrell may have begun her possibly type-cast role as the abrassive but ultimately loyal employee (think "Two and a Half Men" here) with this film...note that this isn't the worst thing in the world as I always enjoy her performances. I am glad to say that Steve Buscemi is around and will say something weird every so often, so you (and I) can sleep tonight knowing that all is right in the world. I've never been the biggest Rob Schneider fan, but his parts in this film made sense and gave me a few extra laughs. There are many more supporting cast members and many more reasons to enjoy this film. I do wonder about Winona Ryder's performance as Adam Sandler's love interest...I understand that at certain times, she was "playing a part" and, being that her character is not a professional actress, certain parts of her performance were supposed to come off as forced, but I felt that some parts where she was to "be herself" also seemed forced. Ultimately though, if I had to make a list of my favorite Adam Sandler films, this one would be in the Top Two (I won't tell you which spot...that's just no fun.) I recommend it to any fan of Mr. Sandler's or any fan of a good, heart-warming, comedic film. Enjoy.
7 people found this helpful

WormgrunterReviewed in the United States on April 5, 2021
5.0 out of 5 stars
Great print quality", "adhesion" and "warmth" one of my favorites.
Verified purchase
Typical Adam Sandler bumblings idiot movie! But when your in the mood for a just plain funny movie and don't care about reviews and you just want to roll your eyes and laugh...this is your movie.

Tom O.Reviewed in the United States on June 16, 2022
5.0 out of 5 stars
Like this movie
Verified purchase
Maybe I am crazy, but I really like this movie. I watch it every few years for a laugh.

JWolfReviewed in the United States on October 27, 2013
4.0 out of 5 stars
Instant Classic of Silliness
Verified purchase
No idea why but this was my favorite movie for a long time. I would watch it over and over. It's very funny and perhaps the last of the great Sandler legacy (Billy Madison, Happy Gilmore, Big Daddy, etc). There is so much to laugh about and remember from the film it's a great comedy.

This movie is somewhat of a remake, but Sandler makes it his own playing a sheltered/naive small town guy who unexpectedly inherits $40 billion when his long lost media mogul great uncle passes away. As Deeds (Sandler) moves to NYC to set affairs in order, everyone in the press is out to get his story. Ms. Bennett, played by Winona Ryder, is a tabloid journalist who goes undercover as a lady in distress, Pam Dawson, to capture Deeds' attention and get her story.

As Dawson and Deeds fall in love, the men running Blake Media (the company Deeds inherited) conspire to tear the company down to sell for profit. Since Deeds has fallen in love with New York, the only way the conspirators can get him out of the picture is to break his heart by exposing Ms. Bennett's scam.

Despite the fact that this movie has a good story line, they still managed to fill it with some zany wacky silly comedy and lines I still repeat today. It's a good one.

Sabrina & Brian CampbellReviewed in the United States on June 25, 2021
5.0 out of 5 stars
That's Hawaiian Punch!
Verified purchase
Love this movie. One of the last few movies Adam did I loved. Seen it to many times. Would watch again!
See all reviews
Back to top
Get to Know Us
Make Money with Us
Amazon Payment Products
Let Us Help You
EnglishChoose a language for shopping. United StatesChoose a country/region for shopping.
© 1996-2022, Amazon.com, Inc. or its affiliates