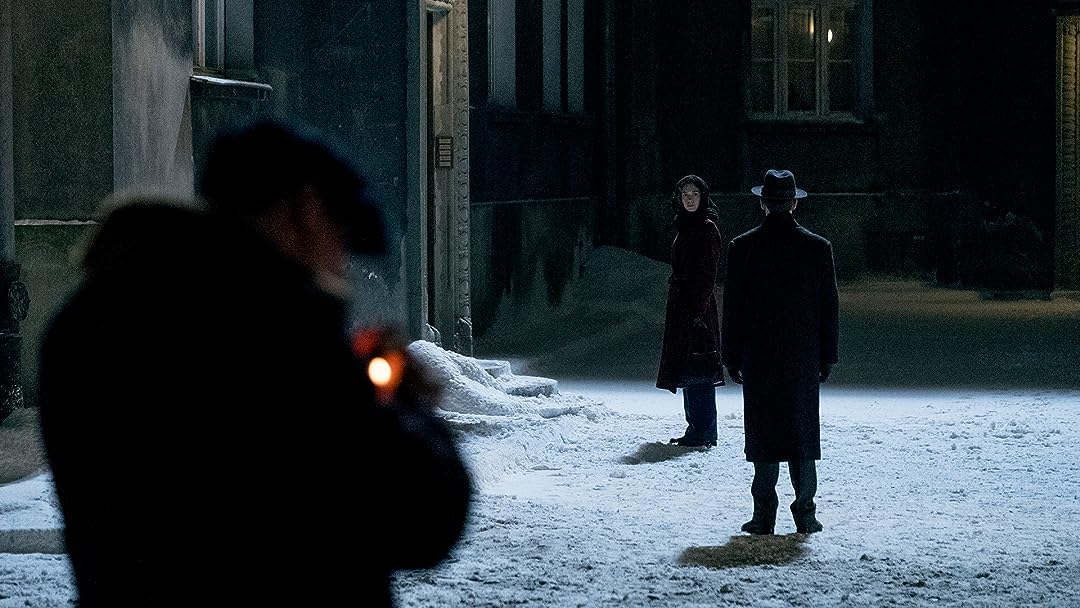 (4,254)6.91 h 58 min2020X-Ray16+
1933. An ambitious young journalist, Gareth Jones, travels to Moscow to uncover the truth behind Stalin's Soviet propaganda that pushes their "utopia" to the Western world. When he gets a tip that could expose an international conspiracy, Jones' life and the lives of his informants are at stake. Based on a true story that would later inspire George Orwell's seminal book Animal Farm.

Aanel VictoriaReviewed in the United States on June 21, 2020
5.0 out of 5 stars
Excellent
Verified purchase
If you're wondering whether this movie is worth the current purchase price, I can tell you it certainly is.

It's a true story, and the film is held together by the glue of the fine performance of protagonist James Norton (War & Peace, Grantchester, Happy Valley). He plays the young British journalist Gareth Jones, who speaks Russian via his mother having worked there and his own natural gift for languages.

The film starts at the very beginning of 1933, and proceeds to approximately the end of 1934. It takes place in London, Moscow, Ukraine, and Wales. The journalist Gareth Jones is committed to exposing the aggressive dangers of authoritarianism in Germany and then also in the Soviet Union.

This is an important historical film highlighting a gripping event and era that has not received enough exposure.

By all means, check the movie out. It's quite revealing and enjoyable!

Laura FerrisReviewed in the United States on June 28, 2020
5.0 out of 5 stars
Wow! It's about time a movie was made on this subject.
Verified purchase
WOW. 🤯 Holy cow, WOW. AMAZING MOVIE. 🤯😭🥶 If you like historical drama that just happens to be true, please watch this!!!! 👍👍 It has a well deserved 5 star review on Amazon and all I can say, it's about damn time that a movie was made about Stalin's Famine that killed between 6-7 million people in Ukraine by Soviet collectivist policies in the years between 1933-1934. I don't know why we don't learn about this deliberate genocide in our country, maybe because WWII came right upon it's heals, or that our own government was reluctant to cast such a sword at our WWII "ally." Maybe it's because in a rush to condemn the holocaust we decided to gloss over the millions dead in Ukraine, or maybe the actual result of centralized planning for the "greater good" is too difficult for the socialists in our country to stomach, let alone make a movie about such historical travesties (thankfully, British and Ukrainian filmmakers picked up for the abject failure of the US film industry). This movie is like Schindler's List, but for Ukrainians. I first read about the soviet/stalin genocide in "Bloodlands. Europe Between Hitler and Stalin." by Timothy Snyder. That book is an international best seller written in 2010 that has been called one of the most important modern history books. I highly recommend that book as well as this movie. Watch the movie, read the book and prepare to be disgusted, outraged and moved to tears. 😭😭
120 people found this helpful

MaryReviewed in the United States on June 22, 2020
5.0 out of 5 stars
Powerful
Verified purchase
Gareth Jones was a truly brave journalist. I encourage every young journalist wannabe to watch this. It helps to know beforehand who Walter Duranty was and to understand the power that the New York Times held in those days as “The Paper of Record”. Cinematography and directing were top notch and James Norton was superb in the role of Jones.
73 people found this helpful

Brett DickinsonReviewed in the United States on June 26, 2020
5.0 out of 5 stars
Powerful movie brings the truth to life
Verified purchase
I cannot recommend this movie strongly enough. In a time when truth is often a hard commodity to find, this movie stands out as a beacon of hope. This movie is based on the true story of Gareth Jones and how he exposed the genocide that Stalin committed in the Ukraine.

The filming locations in Britain, Poland and Ukraine make the movie all the more realistic as you travel with Gareth Jones from Britain to Russian, then the Ukraine and finally back to Britain. Cinematography is excellent, the acting is top notch and the story line is fast paced although there definitely is some artistic license taken. Hopefully after you watch the film, it will peak your interest to find out more information on Gareth Jones and the Holodomor (man-made famine in Ukraine). The director, Agnieszka Holland, does not overwhelm the viewer with all of the horror that Jones saw but provides enough to introduce those of us in the West to the reality of this time and the events.

This is a must watch for every student of journalism. Gareth Jones pursuit of the truth continues to manifest itself throughout the movie. It contrasts with Walter Duranty (New York Times Moscow correspondent) and his efforts to deny what Jones was reporting, even though knowing it to be true. In the movie, Holland powerfully illustrates the corrosive effect denial of the truth has on one's character.

Malcom Muggeridge (noted British journalist who also reported on the famine) said, "People do not believe lies because they have to, but because they want to." This movie brings this home from the earliest scenes in Britain, the foreign journalist enclave in Moscow and the response in the West when Jones returned.
67 people found this helpful

Rich CrawReviewed in the United States on June 21, 2020
5.0 out of 5 stars
Journalist exposes Stalin's evil
Verified purchase
Worth watching and still very relevant. Sad to see access media is still a cancer on journalism now as then. When Walter says, "you can't make an omelette without breaking a few eggs" I had to stop and ask myself when that statement ever worked to the benefit of the poor and powerless? They're always the eggs in this scenario.
62 people found this helpful

gaabriel becketReviewed in the United States on June 27, 2020
5.0 out of 5 stars
Absolutely excellent, beautiful cinematography and editing, ART!
Verified purchase
This was an episode I'd heard nothing really about, I knew Stalin had killed millions but did not know about this or Gareth Jones. Jones was presented a bit "Brit abroad," naive and stupid, but after learning about him I would expect he was moved almost wholly by altruism and less by what comes across as some cluelessness. The actor playing Jones is northern Yorkshire - James Norton - but in one scene with another character the two of them speak Welsh (there are English subtitles) and he does what sounded to me like an excellent Welsh accent, or perhaps I was just happy to hear it at last! Norton's performance is very good. Other Welsh parts were cast with Welsh actors as well as Russian, Ukranian and Polish actors, which gave the whole move a deep, authentic feeling for me. The choices of color are wonderful, as are the landscapes. Some of it is very grim, as a parent there was one extremely horrific scene that ruined my night, nonetheless it was very worth watching.
45 people found this helpful

Carolina SkiesReviewed in the United States on July 18, 2020
5.0 out of 5 stars
This is Socialism of any flavor
Verified purchase
Watch and learn Americans. The access news media you trust so much isn’t unbiased, they have skin in the political arena as well. Some part of you knew that already though. Something has been irking you because the information on your screen doesn’t work in obvious ways. You’re afraid to say it because you know the wrath you’ll incur from your tolerant progressive friends...you’ve seen this play out before. All your doing is feeding an alligator and hoping your bucket doesn’t run dry.

We can’t attend church because singing will propagate the virus yet protesting (yelling) in the streets is fine IF it’s about racism, BUT not re-opening...all of these were chyrons and stories on your screens WITHIN DAYS OF ONE ANOTHER. This is a drop in the bucket of the blatant lying and manipulation by all mainstream news media. Ditch the dinosaur news.

Socialists, If you’re so confident in your system then you can examine opposing arguments. For instance listen to a conservative like Ben Shapiro for two weeks, it’s a free podcast. If you’re correct then you just gained insight on how to debate conservatives better. If you are wrong and Socialism is instituted then untold numbers will inevitably die. Tyrants always profess to be on the right side of history. Stop being fooled by cliches and bumper stickers, use your brain not your feelings.

Socialism always promises a full bucket of food but always ends with mountains of bones, the alligators just die last.

#WalkAway (I did)
18 people found this helpful

PeterslReviewed in the United States on June 7, 2020
5.0 out of 5 stars
The Holodomor Brought to World Audiences
We saw this film at the Palm Springs Int'l Film Festival in Jan. 2020. I have been very interested in this historically important event for many years. My grandfather, a Ukrainian immigrant, introduced me to the topic when I was around 10 years old. So, it was with a fair amount of background that I had when I saw this film was on the schedule. It is abolsutely first rate, the acting, the period context of the film's backdrops, the story line, the pillorying of The NY Times's Walter Duranty and its subterfuge in order to curry favor with Stalin to gain "access" and the fact that the West resisted for so long the acknowledgment of this horror. So, the film has 5 thumbs up. When leaving the theater I tarried at the entrance and observed the facial expressions of the members of the audience who emerged. Dumbstruck was my "read" on how they appeared. I took the opportunity to ask one gentleman who appeared particularly thunderstruck, all he could murmur was "I never knew..." Well, the more of our nation that sees what communism and socialism can achieve the better. I recommend the film for anyone. BTW, those interested can get more detailed information from Robert Conquest's book, "Harvest of Sorrow."
42 people found this helpful
See all reviews
Back to top
Get to Know Us
Make Money with Us
Amazon Payment Products
Let Us Help You
EnglishChoose a language for shopping. United StatesChoose a country/region for shopping.
© 1996-2021, Amazon.com, Inc. or its affiliates