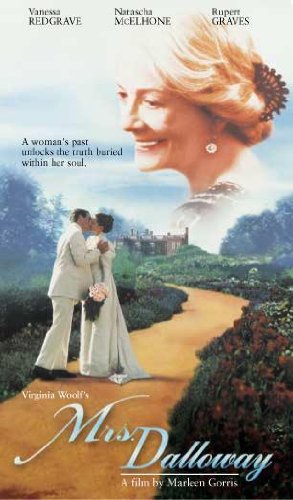 (212)6.71 h 37 minPG-13
Mrs. Dalloway excitedly attends to the final preparations for the party she is giving at her elegant London Home. As she reflects on the days when she was young and highly courted, she finds her life strangely intertwined with that of a tragic young man she will never meet but whose destiny will strike a chord of truth deep in her soul.

Brian MorganReviewed in the United States on December 23, 2017
5.0 out of 5 stars
Septimus
Verified purchase
This reviewer saw Marleen Gorris's 1997 film "Mrs Dalloway," after the novel by Virginia Woolf, when it was new, and it has haunted him ever since, much like the characters here are haunted by their own pasts.

Woolf's prose is deceptively clear, while actually concerning itself with many of the issues which emerged into greater prominence as the Twentieth Century proceeded. The casting here is exemplary. Vanessa Redgrave has a exceptional manner of allowing her audience to sense complexities beneath a serene exterior, which makes her ideal for the title role of this woman, who is hosting a party.

Rupert Graves portrays Septimus Warren Smith, a poet who is now trapped in a marriage and suffers from "delayed shell-shock" five years after the portentous conclusion to World War I. He saw his best friend die before his eyes on the battlefield, and has now descended into psychosis. Mr Graves, who has given us a beautiful array of characterizations on stage and on film, is brilliant as Septimus, who takes his own life after listening to a recording of the aria "Addio, del passato" from "La traviata."

The fact that this important film was a financial failure can only be taken as a condemnation of the antics of the film industry and the bad taste of the cinematic public.

I majored in Literature in college; so, this is a lot of the same old, same old portrayals of people, society, those who follow the rules & a little something about those who don't . . . I personally couldn't give a damn. Perhaps. I've simply read too many books, seen too many movies, etc. so that now I'm jaded. Perhaps it's because I never did care all that much for the rigors of "polite" society. Too little substance & not enough information to "flesh out" the various scenarios being dealt with in this movie. I really didn't have to think or use my mind to any great extent, which made it much less interesting. I'm glad I watched this movie; but, it's not something I feel compelled to watch again.
9 people found this helpful

Linda HendrexReviewed in the United States on May 19, 2019
2.0 out of 5 stars
It Was OK, if You Like "That" Sort of Thing! (Caution: Spoilers)
Verified purchase
This movie was not something I'd watch again. Slow moving and "cerebral" - not much plot but it tries to be "deep". I found it worth watching because the actors, sets, and costumes were entertaining to look at. However, the storyline was flat with very little point that I could ascertain.

If there were better character development, maybe I could have gotten into it more, but it just seems to be a random succession of moments and thoughts of a woman in her declining years, wondering if it had all been worth it. As far as I could tell, she never resolved that question. My takeaway impression was that the heroine was a shallow sort of person who had been too afraid to live. She threw away true love in favor of a safe and predictable existence with a man that she liked but had no passion for. But since she was so shallow, it really didn't matter that much to her and in the end, she didn't seem to regret her decision. I guess if there was any message, it was that some people are shallow and don't require much from life. They can be mediocre and that is probably OK in the grand scheme of things. But, I'd rather watch a movie about an extraordinary woman whose life had been a passionate adventure! You will not find that here. I guess the tragic takeaway is that the chance at living a beautiful and elevated life doesn't come to everyone, and you have to wonder why it came to a woman who didn't value it.

Perhaps if I read the book, I might get the message better, but this story seems so flat to me that I'm not motivated to find out more.

There was brief nudity, "hints" at a lesbian relationship (that was neither shocking nor alluring - just one more random event) and a tragic & traumatic suicide. I don't remember any foul language, but since I was sort of dozing through parts of it, I might have missed that kind of detail. All of this seemed gratuitous to me and I didn't think the story (such as it was) would have suffered without these scenes. Pretty much everything in the movie was random and so there was no satisfying conclusion to tie it all together. For me, it was a genuine yawner. I'm glad I had a deck of cards handy so I could play solitaire while I waited for something interesting to happen. It never did.

I gave it one star for the story and three stars for the trappings of actors, costumes, and sets. Averaged together, I think this movie is worth 2 stars (if that).

Not recommended.
8 people found this helpful

Lisa WamsleyReviewed in the United States on May 24, 2019
1.0 out of 5 stars
Really - in the face once again
Verified purchase
Wake up, AMAZON....The shoving of homosexuality in our faces yet again is nauseating, and not even 10 or so minutes into the film. Not interested in your agenda.
16 people found this helpful

KatieScarlettReviewed in the United States on May 13, 2020
5.0 out of 5 stars
Excellent Adaptation!
Verified purchase
This movie is an excellent adaptation of Virginia Woolf's novel. As I began my master's program in literature, I was drawn to Virginia Woolf, and Mrs. Dalloway is by far my favorite. The movie stays quite true to the novel in many ways, but in other ways it slightly diverges. However, if one looks closely, all of the themes of the novel are portrayed with careful precision in the movie. For example, in the novel Woolf uses the chimes of a clock as a constant reminder of the importance of time in our lives. The movie weaves together the past and present with many flashbacks in order to depict a happier time in Clarissa's life. In the present time Clarissa is middle-aged and distraught about her future. The movie emphasizes this to a greater level than the book, but it works out beautifully. One can better understand the novel by viewing this movie. The end is slightly different than the novel, but in a very good way. One must not get hung up on the kiss by the fountain, which disturbed other viewers. The kiss should be put in context of the story. Indeed it is but one part of the story which must be taken in altogether. I found both the novel and the movie absolutely delightful.
3 people found this helpful

anonymousReviewed in the United States on May 1, 2019
5.0 out of 5 stars
literary justice
Verified purchase
This film honored Wolff's words and the mood and style of the times. Rupert Graves's performance as the shell shocked WWI vet was one of the best ever. I was mesmerized watching Mrs. Dalloway and felt the poignancy of the loss of films such as this in these times.
6 people found this helpful

H. C. CruzadoReviewed in the United States on June 19, 2020
1.0 out of 5 stars
Someone made a mistake.
Verified purchase
I could not see this DVD movie in my player because it came out as being playable only in Region 2. I was so sure that I had made the selection for Region 1 but that was not the case. What caused the confusion, I do not know. And I do no know how to get a refund, either. I guess it will just sit in one of my desk drawers.
One person found this helpful

Maria KReviewed in the United States on May 19, 2019
2.0 out of 5 stars
Rather boring
Verified purchase
Not sure why I even bothered to finish watching it.
4 people found this helpful
See all reviews
Back to top
Get to Know Us
Make Money with Us
Amazon Payment Products
Let Us Help You
EnglishChoose a language for shopping. United StatesChoose a country/region for shopping.
© 1996-2021, Amazon.com, Inc. or its affiliates