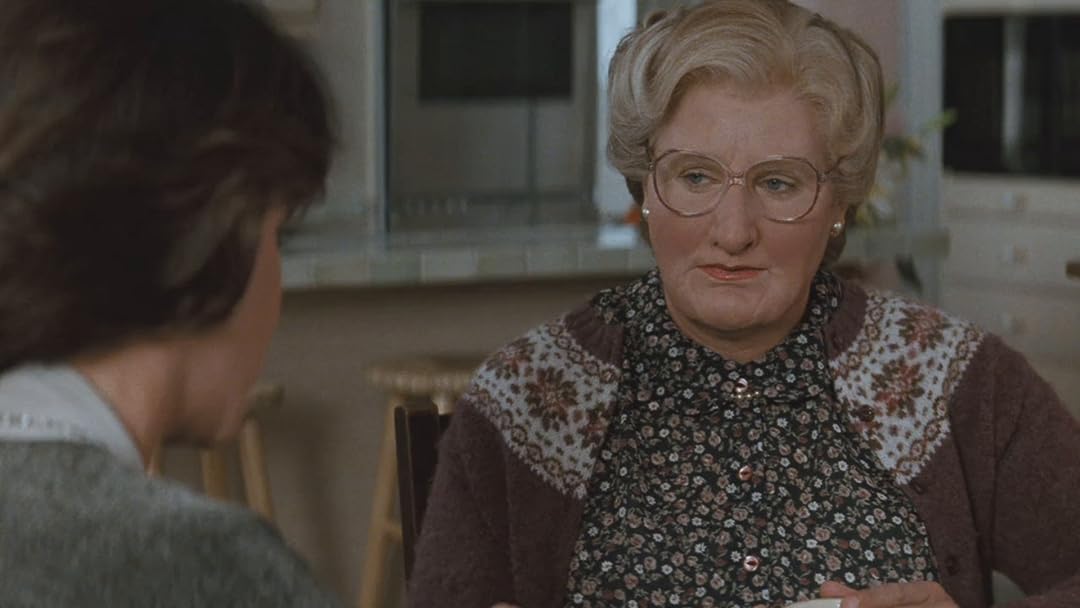 jazzybessReviewed in the United States on January 11, 2018
5.0 out of 5 stars
Helps kids of divorce to heal
Verified purchase
Got to watch this with my kids for the first time since their dad and I split (5 years ago). I have since remarried and their dad lives with his girlfriend. I think this movie helps kids of divorce in the healing process, especially if their parents can keep it civil in front of them. It shows them how to keep a sense of humor about things. They both loved it (13 and 8 years old). Also, I really miss Robin Williams. He was a talent like no other.
33 people found this helpful

I am now 88 years old. My parents could not afford a "babysitter during the 1930 depression, so they sent me to the local movie houses, (which at that time was less than 25cents admission) for children under the age of 10.
(The movie theaters then opened as early as 9AM and I usually went home about 3PM.)

Starting at that early age, I saw most of the greatest actors and also learned a great deal of "History" from what I saw on the screen. You can't say that today.

Recently I bought the "Mrs. Doubtfire". DVD and I have never seen a more mind-blowing GREATER actor as the late ROBIN WILLIAMS performance in "Mrs. Doubfire.

I have recently bought multiple (DVD) copies (from Amazon) of the extraordinary Robin Williams's performance in Mrs. Doubfire for lifetime gifts for as long as my remaining days.

Midwest CraftyLasso Reviewed in the United States on November 11, 2019
5.0 out of 5 stars
My Modern Take on This Childhood Favorite!
Verified purchase
Watching this movie as an adult compared to when I was growing up was an interesting experience. I still love this movie. Yes, it is dated—BUT.. In that, it provides as a significant reflection on progress and forward movement. It may not seem like it at times, but we, as a society, have come a long way. Certain moments/lines are not those we’d consider “PC”, or politically correct, in this day and age. That’s a given in most classic movies, at least in my personal experience. Yet, with this...there are so many moments that are absolutely timeless; seeds of grounded and raw wisdom, all of it rooted from the motive of genuine love. Above all, the silliness of this movie and the absurd concept itself is one rooted in good intention. It is a classic. I find myself laughing most at Williams’ energetic playful nature and fondly concluding that love makes many (if not most of us, at one point or another..) do some questionable, occasionally borderline-unstable things. A movie with heart, moments that cut, showing the truly bruised and raw nature of an adult relationship that’s fallen out of balance. At whichever age you watch this movie for the first time, or the 109th time... you will grasp the depth to be found within the framework of silliness as it aligns with your current personal lens and capacity to do so. As for the Non-PC lines and bits included—they can provide as excellent teachable moments for your kids.
7 people found this helpful

EricaReviewed in the United States on December 17, 2020
5.0 out of 5 stars
A heart warming, hilarious classic that everyone should see!
Verified purchase
I don't want to give away any spoilers, just in case you are actually someone who hasn't seen this. So I'm going to do a review based only on my opinion of the overall film. I consider this movie a classic, and if you haven't seen it before I HIGHLY recommend you watch it ASAP! I loved this movie when I saw it as a child, and still love it as an adult. It is chocked full of laugh out loud moments, while also managing to be heart warming & serious at times. Some of Robin Williams best work, and probably my favorite movie of his. I loved being able to share something from my childhood that I truly loved with my husband & 3 kids, who ended up also truly loving it. My kids range in ages from 15 to 9, and my hubs is 39, and ALL of them were laughing hysterically at Mrs. Doubtfire. It is hard to find a movie that pleases everyone of all ages, but this IS that movie. Please trust me, and watch this!
4 people found this helpful

spiritscribedReviewed in the United States on July 18, 2015
5.0 out of 5 stars
It was a run by fruiting!
Verified purchase
This movie had me laughing so hard I actually got a headache! Robin Williams is beyond funny in it, he'll have you rolling on the floor laughing. Sally Field is brilliant in it, along with Mara Wilson and the other actors.

It's a great blend of slapstick, comedy, heartfelt moments, touching scenes, and just downright hilarious lines that today are still classics. If this movie doesn't make you laugh, then you have no sense of humor. Period. That is how funny it is.

Also, the Behind the Seams Edition has TONS of deleted, extended and alternate scenes, along with hilarious outtakes! A couple deleted scenes are hilarious moments where Mrs Doubtfire gets back at the nosy neighbor next door by ruining her garden.

Another hilarious deleted scene includes her messing up the washer, flooding the floor, while on the phone with Sally Field. There's also a deleted scene of the fight between the two at home after the restaurant scene when Sally Field finds out Doubtfire is really Robin.

As I stated, if this movie doesn't make you laugh, you got NO sense of humor whatsoever. It is a brilliant film, one of the late Robin William's BEST.
19 people found this helpful

Amazon CustomerReviewed in the United States on April 16, 2018
4.0 out of 5 stars
She feels like she does not have support from her husband in ...
Verified purchase
The early 1990’s film, Mrs. Doubtfire, captures the drama of a rocky marriage with the comedic element of impersonation. When first viewing the film, one may consider it a drama/comedy, but upon taking a closer look, one discovers evidence that the film is a subgroup of the Romantic Comedy genre. The film can be viewed as a divorce romantic comedy, in which going through or having had a divorce helps the characters to grow individually, helping them to appreciate their partner more and helping the partner appreciate them more. In Mrs. Doubtfire, the wife (Sally Field), proposes the break up of the marriage. She feels like she does not have support from her husband in taking care of the cleaning, cooking and the kids. The husband (Robin Williams), is out of a job and, missing his kids, impersonates a British nanny who is hired by Field’s character. Williams get to be with his kids and learns from his wife what she always wanted from him. William’s acting ability speak for itself as he transforms time and time again between Mrs. Doubtfire and dad. We get to experience the change Williams is able to bring to the screen in voice and body that makes audiences forget that Mrs. Doubtfire and the children’s dad is the same person. The dialogue in the film is able to make the most dramatic of moments humorous and the most humorous of moments dramatic, keeping the viewer engaged throughout.

The film captures the idea of “remarriage”, written extensively about by Stanley Cavell. Over time, I have interpreted “remarriage” as a couple who has been in a relationship with one another before, we know that they love each other and are “meant to be”, but in the present time, we do not know why they are meant to be or how they will realize they are. The film Crazy, Stupid, Love also focuses around a remarriage plot within the sub genre of divorce romantic comedy. Steve Carell and Julianne Moore’s character’s are going to get divorced, but each, throughout the film, grows to have new personality characteristics and traits that helps them to see that they do not want a divorce, but rather each other. Mrs.Doubtfire is similar to that film because both members of the relationship change, resulting in the the partner liking the other better for their new efforts and traits. The main difference in films is the of ambiguity in Mrs.Doubtfire of whether the main couple will get back together again. Mrs. Doubtfire is a critically acclaimed piece, but not for it’s ability to reinterpret and refreshed the romantic comedy genre. The next time you’re at home on a Saturday night and watch the film, you can tell your coworkers on Monday you watched a Rom Com over the weekend.
4 people found this helpful

genevaboundReviewed in the United States on February 28, 2021
5.0 out of 5 stars
Great for family movie night
Verified purchase
Was running out of options for family movie night. As the kids get older, the movies either are too kiddy or the child characters are just too snarky. I hate that the latter is portrayed as confidence and being 'edgy.' This movie's earnestness seems almost dated at times. But Williams' brilliant physical humor and movie's hilarious dialogues kept the entire family laughing. Yes, there are themes which today we would cringe at but look at them as teaching moments. Being anachronistic and not giving the entire movie (with its themes about love and relationships) a chance would be a loss.

teols2016Reviewed in the United States on July 3, 2014
4.0 out of 5 stars
Robin Williams Has Done Better...
Verified purchase
While this is without a doubt one of Robin Williams's better comedies, I like the man better in more dramatic roles where he subtly inserts his humor (i.e. Dead Poets Society, Good Will Hunting.) But as a comedy, this is still a very good film and it does allow Williams to go a bit more over-the-top than some of his other projects have. A prime example is his multiple phone calls as various different characters considered unsuitable by the poor soul at the other end of the line. As for the rest of the cast, they were definitely the collective straight-man to Williams's continuous unpredictability. Well, that applies to almost everyone...one couple is exempt. Ultimately, my biggest problem in the film is that, while Robin Williams and his on-screen wife, Sally Field, are obviously unhappy (the divorce is a clue there), we never get a glimpse into what they're losing. Weren't these two happy with each other at one point? They had to be, right? They got three kids out of it, didn't they? But in the end, it's still a very funny film that kids and parents can watch together. Enjoy.
5 people found this helpful
See all reviews
Back to top
Get to Know Us
Make Money with Us
Amazon Payment Products
Let Us Help You
EnglishChoose a language for shopping. United StatesChoose a country/region for shopping.
© 1996-2021, Amazon.com, Inc. or its affiliates