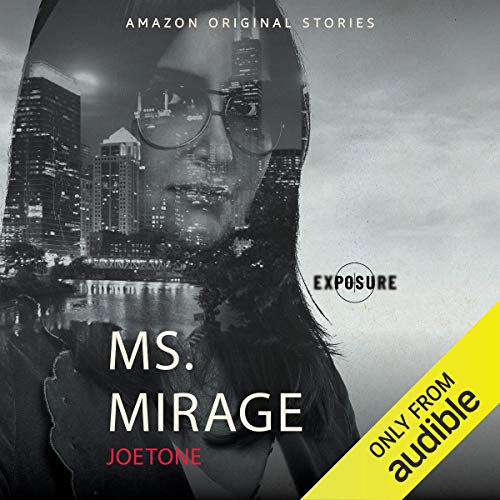 When an investigative journalist’s bold and infamous undercover sting laid bare graft-ridden 1970s Chicago from inside a dummy pub, she became a star among men. But could she win the big one?

In the era of Watergate and rising feminist awareness, reporter Pam Zekman was queen of the muckrakers. Her biggest investigation: buy a bar, document the inevitable city department shakedowns and bribes, and publicly document Chicago’s institutionalized corruption. Her epic story changed Chicago and also raised serious questions about the future of journalism.

Joe Tone’s Ms. Mirage is part of Exposure, a collection of six incredible and true stories of American double lives from millionaire CEOs and suburban teens to undercover investigators and scam artists - all for whom secrets are a way of life. Each piece can be read or listened to in a single astonished sitting.

Enjoy this audiobook free + more
Learn more about Membership
List Price: $1.99
You Save: $0.25 (13%)
By completing your purchase, you agree to Audible’s Conditions Of Use
Sold and delivered by Audible, an Amazon company

Mindo'ermatter
4.0 out of 5 stars Reporter Exposes Chicago 1970s Political Bribery
Reviewed in the United States on November 7, 2020
Verified Purchase
The true story account of Chicago undercover investigative reporter, Pam Zekman, and her efforts to expose political corruption of many within Mayor Richard J. Daley's political machine. In this "gotcha" sting operation, author Joe Tone describes the details of how a bar called the "Mirage" was set up and documented how city inspectors and others required "payments" to get both false inspections and expedited approvals for the bar's operations.

This account explains the planning and secrecy surrounding the newspapers support and management of this undercover reporting process and the care taken to avoid "enticement" in this sting operation that exposed "standard-practice" corruption among Chicago gatekeepers and bureaucrats in the 1970s.

Well-written and compelling, this exposé gives evidence of how old-style political bosses funded and maintained their illegal operations. Told too is the background story of how undercover investigative journalism has fallen out of favor of today's mauntstream news organizations.

The story also reveals Pam Zekman's backstory motivations for becoming a reporter who exposed political corruption in Chicago's shadier past.

This "old news" deserves retelling to remind us of the dangers of political perversions, suggesting for us to be even more vigilant today in identifying and stopping newer and possibly more invasive forms of political and bureaucratic abuses of power.

rlptwo
5.0 out of 5 stars No City Is Exempt
Reviewed in the United States on September 19, 2019
Verified Purchase
Think what you will but know this, every city, no matter how large or small, how sophisticated or back- water, has it own stories of incompetence, malfeasance or corruption. Thank God there are those who will dig for the facts and report them. Not tell us what to think. Not tell us why they think this out that was done. Just TELL us what is happening. Let us, or the powers in authority, do what needs to be done. Let us tell them. And keep on investigating, no muckraking, please. These folks did it right. They did it for us, not for themselves or their sense of right.
Read more
2 people found this helpful
Helpful
Report abuse

Stephen G: Japan & UK
4.0 out of 5 stars Interesting and concise
Reviewed in the United States on April 24, 2020
Verified Purchase
The author avoided the mistake of spinning the story out longer than it was worth (a problem in some of the other stories in the Exposure collection).
Interesting, informative and well-read, the story kept my wife and I entertained for an hour or so during lockdown, as it detailed the undercover journalism employed to expose the corruption endemic to 1970s Chicago.
Read more
One person found this helpful
Helpful
Report abuse

Ron K
4.0 out of 5 stars Corruption, Chicago Style
Reviewed in the United States on June 23, 2019
Ms. Mirage, by Joe Tone, is a non-fiction novel about undercover journalism. Readers can probably quickly identify the subject of undercover reporting through its visible television component exemplified by 60 Minutes, a broadcast identified in this account. This book focuses on the career of Pam Zekman, and her career working as a journalist for two Chicago newspapers, the Chicago Tribune, and the Chicago Sun-Times. Her print career began in 1970 and lasted to 1981 when she switched to television news.

On the Chicago, Tribune Pam worked as part of a team exposing Nursing Home abuses. In a team effort on election voter fraud, the story won a Pulitzer Prize. While doing reporting on these targeted projects, Pam became aware of different kinds of scams and shakedowns that business owners had to pay to do business. There was no realistic way to go undercover against such comprehensive graft from so many agencies. There were inspectors for building codes, plumbers, electricians, health and food inspectors, fire inspectors, and licensing agencies, all readily accepted bribes to speed necessary processing of permits. Pam had an idea. She would start a bar and have the corruptors come to her.

The Chicago Tribune management came up with nothing but reasons to say no. Pam would eventually take her idea to the Sun-Times where, if it was not enthusiastically accepted, it was at least allowed. Pam got her approval to start a bar from the Sun-Times in 1975. Buying and outfitting a bar took time, and Pam’s bar, The Mirage would not open until near the end of 1977. Customers arrived as did solicitors of bribes. The bar stayed open until Pam and her team members decided they had enough proof to publish an expose of city corruption. Stories in the Sun-Times began in January 1978.

This account is one of six that make up an Exposure Collection on Amazon. Each selection focuses on a grand scam or scheme to illegally obtain money by the greedy few from the gullible many. The books are intriguing not for their content or even named characters but for the processes employed to divert funds. These short accounts reveal how smart thieves can exploit holes in a system. The stories can contribute to consumer awareness in the age of a growing number of incidents of identity theft and cybercrime.

I have read two books from this collection. I gave Ms. Mirage four Amazon stars for transparent reporting. Not every book in the collection is as clear. I found The Two Million Dollar Intern, another Exposure Collection Title, left me mired down in detail and unclear timelines. I decided not to post a review of Intern. After reading Ms. Mirage, which I liked, I know I must be careful with books from the Exposure Collection.
Read more
4 people found this helpful
Helpful
Report abuse

Kindle Customer
5.0 out of 5 stars Historic Journalism
Reviewed in the United States on June 21, 2019
Another fascinating installment of the Exposure series, Ms. Mirage is the story of a female reporter for the Chicago Sun Times who relentlessly pursued undercover stories for the betterment of the citizens of Chicago. Pam Zekman made it her business to ferret out illegal, immoral, and dangerous practices and elicit change within the system. She was a bulldog, a real fighter for justice. Here the author shares the details of one of her biggest stories in the 70s, opening a bar to uncover the shakedown of small business owners by city officials and inspectors. It was an ambitious project, and an example of how diferent journalism was back then.

Tone brilliantly captures the highs and lows of Zekman's journey, the difficulties she faced as a woman, and the rampant corruption that existed. The story never dragged and yet I felt it contained sufficient details to show just how Pam and her crew accomplished their goal and the odds they were up against. Great piece on an important topic. The book contains audio narration which I took advantage of. The narrator had a compelling voice and her pacing was even. They used a female narrator which makes it easier to feel you are in Pam's head.
Read more
One person found this helpful
Helpful
Report abuse
See all reviews