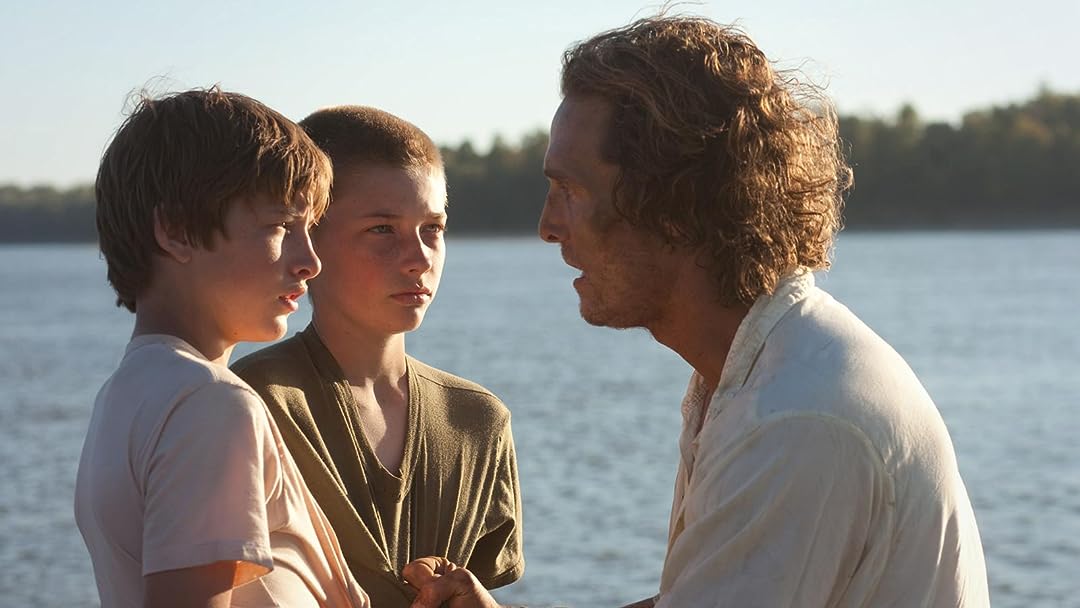 (7,251)
7.42 h 10 min2013X-RayPG-13
MUD is a timeless adventure about two boys, Ellis and his best friend Neckbone, who find a mysterious man named Mud (McConaughey) hiding out on a deserted island in the Mississippi.

sueannemarieReviewed in the United States on February 12, 2019
1.0 out of 5 stars
Using God's name in vain.
Verified purchase
I didn't watch much of it, I didn't like seeing a young boy using cuss words then I turned the movie off when of the boy father used God's name in vain. I don’t watch movies that uses God name in vain.
90 people found this helpful

GraceReviewed in the United States on February 26, 2019
1.0 out of 5 stars
Offensive language from young boys
Verified purchase
I wanted to watch this movie so much ! I only made it through the first five minutes and there was so much offensive language from the two young actors I turned it off. Apparently from the other ratings it must have a great story. I will never know.
54 people found this helpful

Rocko3Reviewed in the United States on January 13, 2019
5.0 out of 5 stars
One of Matthews best films......
Verified purchase
I've watched a lot Matthew M.'s movies, about like the rest of the planet, but this is one of his best projects. The entire cast does a superb job, but it's easy to put on a great performance when you're not as well known. My thoughts anyway. But Matthew M. is well known and still puts on an awesome performance. Everything about this movie is great: cinematography, script, direction and production. I especially liked the prosthetics they used on Matthew... Of course, he's always been one to go to the extreme to claim a role. If you haven't watched 'MUD' yet, you owe it to yourself to catch it. This is my first time viewing it, but I'm sure I'll watch it again before it leaves Amazon........
43 people found this helpful

LodestarReviewed in the United States on January 10, 2019
5.0 out of 5 stars
Decidedly Clean and Rather Poignant
Verified purchase
I have to wonder why this movie isn't better reviewed. Perhaps the length. Perhaps the lack of sensational action and drama. Perhaps the lack of PC tripe. I don't really know. What I do know is that this was a great movie with some pretty stellar acting from the two protagonist youths who managed to create strong likeable characters the kind we don't often get to see anymore.

I would say that this movie is a must watch for any young aspiring moralist or social student as well as any looking for virtuous strong young male role models.

Amazon CustomerReviewed in the United States on July 22, 2015
4.0 out of 5 stars
The always excellent Matthew McConaughey anchors the film as the titular character
Verified purchase
Mud is a coming of age story centering around a boy named Ellis and his friend Neckbone. The adventure begins with the boys piloting a small boat to an island on the Mississippi, where they discover a boat lodged in a tree. They claim the boat as their own, but soon find evidence that the boat already has an occupant. It turns out a mysterious man who goes by the name "Mud" lives in the boat. He makes a deal with the boys, first for food, and later for help in restoring the boat. When they agree to help him, they are drawn into a life-changing series of events.
The always excellent Matthew McConaughey anchors the film as the titular character. He's a likeable rogue, and the audience can't help but like him, even though it's almost certain his stories are all lies. His charisma draws the boys into his world. Ty Sheridan plays Ellis, a resourceful, stoic boy who is taking his first tentative steps into manhood. Sheridan plays the role with just the right combination of energy and understatement. He's intense, but also reserved, which works well with the movie's subject matter and setting. He's used to doing things on his own, and was raised to keep his emotions hidden.
Reese Witherspoon rounds out the cast as Mud's love interest Juniper. Like the rest of the cast, she plays her role with a quiet intensity that works well.
The film is well-written, well-acted, and shot in an understated manner that focuses on the characters rather than the plot. It's a great story of a boy's loss of innocence, and well worth watching.

Kindle CustomerReviewed in the United States on October 4, 2018
1.0 out of 5 stars
Watch in one sitting or you'll be frustrated
Verified purchase
This is a PRODUCT review of the product I bought, a bluray disc. For a MOVIE review, consult IMDB.

This is a terrible bluray BECAUSE it REQUIRES you to skip through all the warnings and previews EVERY TIME the movie stops (for instance, when I take a 5-minute break and my bluray player goes to sleep). There is NO WAY to access the menus or re-start the movie once the bluray player has gone to sleep or turned off. Completely asinine and ridiculous.

On the plus side, miraculously it DOES remember your subtitle selections and where you left off, even if you change players. Why it requires you to skip through all the warnings and previews is unimaginable and ridiculous.
11 people found this helpful

MDLIONReviewed in the United States on April 25, 2015
4.0 out of 5 stars
Excellent Unabashedly Southern Tale
Verified purchase
"Mud" is the story of two boys, Ellis (Tye Sheridan) and Neckbone (Jacob Lofland), who come across a man, Mud ( Matthew McConaughey), hiding on a small island in the Arkansas River, a tributary of the Mississippi River. Mud wants the boys to help him reunite with his girlfriend, Juniper (Reese Witherspoon). Mud killed a man who impregnated Juniper and caused her to lose the baby by pushing her down a flight of stairs. The law and bounty hunters are searching for Mud.

Jealousy, betrayal, separation, revenge and violence are prominent themes in "Mud". They issue from the main theme, the difficulty in human relationships, particularly the relationship between man and woman, husband and wife, which often starts off so promisingly and hopeful.

Snakes are also a theme in "Mud", particularly the Cottonmouth, a poisonous water moccasin. Early in the movie Ellis says, "I hate snakes." To which Mud replies, "That's because God put um here for us to fear." Later in the movie as Ellis' parents argue while their marriage disintegrates into separation and probable divorce, Ellis' father Senior (Ray McKinnon) accuses his wife and Ellis' mother Mary Lee (Sarah Paulson), of raising Ellis to be "a snake just like herself."

In Genesis 3:12 after Adam and Eve fell for the temptation of the Serpent, the Snake, we see the first division in human relationships between the man and his wife: "The woman whom you put here with me - she gave me fruit from the tree, and so I ate it." This will eventually lead to murderous violence as Cain kills his brother Abel.

When Ellis and Neckbone first learn that someone else is on the small island where they are hiding a boat, they see a footprint in which it looks like a cross is in the heel of a boot. But Mud eventually tells the boys that he has "nails shaped like crosses" in his boots.

Jesus nailed to a Cross has obtained the Grace to heal human beings and repair their sometimes stormy, and even violent relationships.

I thought "Mud" was excellent with an exciting climax. How refreshing it is to see an unabashedly Southern story in which the Southerners aren't being portrayed as stupid yokels. Mark Twain, whom "Mud" writer and director Jeff Nichols mentions in an extra after the movie, knew good stories could be set in the South. Would that more modern creative people would learn that the South isn't just part of "flyover country". Reese Witherspoon, a Tennessee native, touches on this also in an extra, saying, "There aren't a lot of Southern film makers."

Texan Matthew McConaughey as Mud is excellent as always. He's now on the A-List, if he wasn't already, after his Best Actor Oscar win for "Dallas Buyers Club". But he remains an interesting character actor.
33 people found this helpful

bookishcatsavantReviewed in the United States on April 18, 2019
5.0 out of 5 stars
Another great McConaughey Movie
Verified purchase
If you're a huge fan of Matthew McConaughey as I am, then don't miss this movie. As he does in all his movies, MM gets in full character. In this particular movie, he plays a Southerner from Arkansas who has a fantasy view of love even though many red flags scream at him on the wrong moves he's making. In fact, I believe the grand theme of this movie, more than the coming of age of a 14 year old, is everybody's exploration of what love means to them. All characters, despite their age and experiences, have rosy expectations of love, and when things don't go their way, they crash down...until time heals all wounds and everybody grows wiser. The entire storyline is set in the Mississippi river (albeit filmed mainly in Arkansas) with deep Southern drawls. As is often the case with Southern movies, there is a constant equation between what's morally right and what's wrong. It makes you think a lot about righteousness and good parenting. I personally loved the movie as it kept me thinking of larger things beyond the story of the movie. Be warned that the movie runs really slow at times but there's also a lot of action in some scenes.
4 people found this helpful
See all reviews
Back to top
Get to Know Us
Make Money with Us
Amazon Payment Products
Let Us Help You
EnglishChoose a language for shopping. United StatesChoose a country/region for shopping.
© 1996-2022, Amazon.com, Inc. or its affiliates