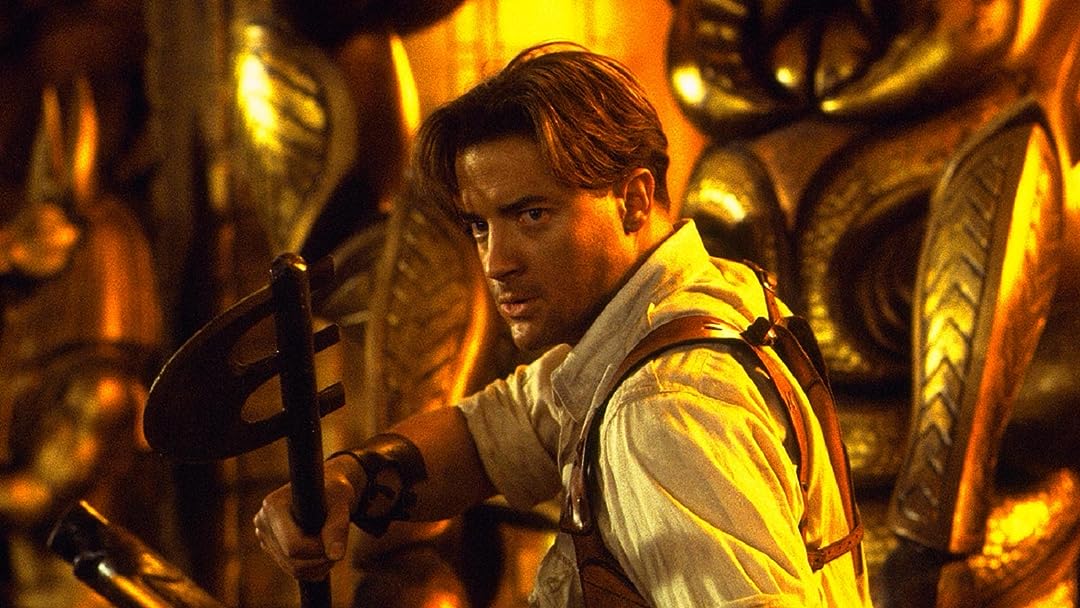 (7,989)
6.42 h 9 min2001X-RayHDRUHDPG-13
An ancient legacy of terror is unleashed when the accursed mummy, Imhotep (Arnold Vosloo), is resurrected -- along with a force even more powerful: The Scorpion King (The Rock). Now, as the fate of all mankind hangs in the balance, Rick O'Connell (Brendan Fraser) and his wife Evie (Rachel Weisz) embark on a daring, desperate race to save their son -- and the world -- from unspeakable evil.

joel wingReviewed in the United States on February 7, 2021
4.0 out of 5 stars
Captures the fun and adventure of the 1st Mummy film
Verified purchase
The Mummy was such a hit they had to turn it into a franchise. The O’Connells, Brendan Fraser and Rachel Weisz, returned. They were trying to stop the bad guy from the original movie Imhotep (Arnold Vosloo) from bringing back the soul of his ancient lover Meela Nais (Patricia Velasquez) and control the army of the Scorpion King so that they could rule the world.

The movie used the same formula of the first film and was very effective. There’s mummies, scorpions, gun play, sorcery, etc. They did push it a little bit too much with a blimp. This was also Dwayne Johnson's first major role in a big blockbuster movie and then only let him say two words and then he was just an animated monster. Otherwise it captured the fun and adventure of the first release.

TheoStixReviewed in the United States on October 1, 2020
5.0 out of 5 stars
"The Mummy Returns"- A fan-favorite gets a beautiful 4K release!
Verified purchase
2001's "The Mummy Returns" has long been a fan favorite for many, right along with its 1999 predecessor. They were the right movies at the right place at the right time. Two wonderful adventure romps loosely inspired by the classic Universal monster-movie that quickly found a massive worldwide audience.

Director Stephen Sommers' sequel once again follows Rick and Evelyn O'Connell, now with a young son of their own who shares in their adventures. When their old nemesis Imhotep is once again raised from the dead, it turns into a race against time as both our heroes and the dastardly villains try to make their way to a mythical golden pyramid which holds the key to commanding the deadly army of Anubis.

"The Mummy Returns" is very much a balls-to-the-wall action picture with non-stop special effects and increasingly farfetched set-pieces. It's the ultimate escapism movie- something that's just pure fun and spectacle from beginning to end. While the story is full of holes and the execution is often flimsy, that's not really the point. Sommers and his wonderful cast are just trying to entertain the audience, and in that respect the movie succeeds very well. It's a very easy movie to pop on and enjoy, and it makes for perfect rainy-day entertainment. Just like 1999's "The Mummy," it's a movie I've revisited many times over the years, and I plan to continue to do so for the foreseeable future.

And if you're a fan of this film, the 4K release is definitely worth picking up! I'd previously owned the movie on both DVD and Blu-Ray, but this 2017 Ultra-HD disc is by far the current definitive release. The picture is a fantastic step up over the standard HD Blu-Ray, with an increased sharpness in many key sequences and some stunning HDR colors that practically pop right off of the screen. Right from the film's opening moments, you get a taste of what's to come, and it's just fantastic all around.

There is something of a tradeoff that I want to bring up though. As is sometimes the case, the increased resolution does make some of the dodgier effects stand out more. Including the infamous "Scorpion King" battle at the end of the film, which looks worse than ever. So be prepared for that.

Still, the typically beautiful image and the film's sheer fun-factor make this a must-own 4K release for me. The film typically looks better than ever, and the action comes fast and furious. It's great entertainment that is still appealing nearly twenty years later.

A. MattoxReviewed in the United States on November 16, 2017
5.0 out of 5 stars
Love this movie and watch it often
Verified purchase
This is my go-to movie. I put it on often while doing weekend housecleaning or when I just want to sit and have a good laugh.
The mummy is more terrifying than the original version since he gets a modern day CGI twist. The acting is campy and fun, at times serious, but none of the actors take themselves too seriously or distract from the film. The actors seem to be genuinely enjoying themselves and I never get tired of watching it.
This movie makes my top 5 list of all time.
11 people found this helpful

MiloReviewed in the United States on February 27, 2021
5.0 out of 5 stars
Errol Flynnesque adventure starring Brendan Fraser and Rachel Weisz
Verified purchase
"The Mummy Returns" is a 2001 American action and adventure film written and directed by Stephen Sommers starring Brendan Fraser, Rachel Weisz, John Hannah, Arnold Vosloo, Oded Fehr, Patricia Velásquez, and Dwayne Johnson. The film is a sequel to the 1999 film "The Mummy" and was distributed by Universal Pictures.

The Mummy Returns inspired the 2002 prequel film "The Scorpion King," which is a spin-off film set 5,000 years prior where Dwayne Johnson (The Rock) is introduced in the film. "The Mummy Returns" was a box office success despite mixed reviews and followed by the 2008 sequel "The Mummy: Tomb of the Dragon Emperor" starring Jet Li.

Mickie FoneReviewed in the United States on August 21, 2022
5.0 out of 5 stars
Wonderful Saturday afternoon movie for the whole family 👪.
Verified purchase
I love everything about this movie and the franchise..except for the last movie..This is number 2 in the series and as usual Brendan Frasier was perfect in every way...in my opinion it is the best one of the whole series...
One person found this helpful

Deborah MacgillivrayReviewed in the United States on May 30, 2002
5.0 out of 5 stars
This benefits from repeat viewing!
Verified purchase
I loved the first in the series, so eagerly awaited this one, and went, yeah, well...not as good.
And in many ways it is not, the quiet character development that so was so charming in the first one is rather pushed aside in this head long rush into a pace that never stops for breath. You are nearly exhausted by the end!!
However, after the initial grump about it not being as good, I have since viewed it several times. And the more I view it the more I like it. The humour is there, brilliantly delivered by Brandon Fraser, like after rescuing his wife from being killed by the resurrected mummy, they are escaping and she pauses to pull a bench to block a door, and he gently said in his typically comic Brandon voice, "Honey, what are you doing? Those guys don't use doors." The kid is precious without being TOO CUTE. Especially fun is his interplay with his kidnappers - ala Ransom of Red Chief, bugging them with "are we there yet?" so typically bored kid!! Also, with the female captor when she tells him to behave and he replies, "I don't behave for my parents, so what make you think I will for you?"
You get eye candy in the female fight scenes, wonderfully staged. A whole returning crew, the the minor leads in the first one playing much more prominent roles, and with reason!!
So if you enjoyed it, just not as much, trying a few repeat viewings and you might be surprised. I was. I found I liked it more each time!!

S. DavisReviewed in the United States on October 19, 2001
4.0 out of 5 stars
By today's standards, this film is a flop!
Verified purchase
Yes, by today's standards this movie is a flop! What could the makers of this movie be thinking? No sex, foul language, blood splatter! Just old fashioned action-filled, swashbuckling, fun. The actors are actually able to speak three words without the "f" word! No "f" word in any one of its variations. No between the sheets scenes. Wow, what a concept! This film is more like the Star Wars genre. Lots of action, special effects and a lot of "tongue-in-cheek" humor. I loved this movie. I actually went to see it 6 times, while it was playing in the theaters. I couldn't wait for the DVD/video release. You can't take this film seriously, it's too out there. But, you can show it to the kids without worrying about nightmares, the language they'll hear or excessive violence and lots of blood splatter. It was great to see a "family" work together to take down the baddies. I happen to love this movie. But you need to relax and enjoy it. There is no social message here or any racial tension. All the "of color" characters actually get along and work together. More movies should be like this one!
8 people found this helpful

J.W.Reviewed in the United States on July 4, 2002
3.0 out of 5 stars
A Little Too Wrapped Up in Speical Effects
Verified purchase
When making a sequel, one should concentrate on new plot twists, yet stay true to the original story. This movie, though not bad, is a little too repetitive and lacks a real interesting plot. Brendan Fraser, as usual, has an overall decent performance, but his character, like before, is a little too heroic and it is too hard to enjoy his performance in this type of role. The introduction of the Scorpion King is almost a complete waste of film. His debut is not much of anything. He plays a total of about 5 collective live action minutes, proving that this movie is too concerned with impressing its viewers with computer graphics and not with acting.
Overall this is a good movie. It is action packed and full of eye popping special effects. It really doesn't touch on the original movie's ideas, but tries to add something new. Its direction is kind of confusing, and the viewer will notice many likenesses to other movie ideas. The DVD has a few special features that, like all movies with animation, are filled with the how-they-done-its of computer animation.
If you already own "The Mummy," this movie is a nice addition, but it is not really worth owning by itself. Hopefully the creators know when to quit and will not "curse" us with another Mummy film after this. The story has now been played to death and should be laid to rest.....
2 people found this helpful
See all reviews
Back to top
Get to Know Us
Make Money with Us
Amazon Payment Products
Let Us Help You
EnglishChoose a language for shopping. United StatesChoose a country/region for shopping.
© 1996-2022, Amazon.com, Inc. or its affiliates