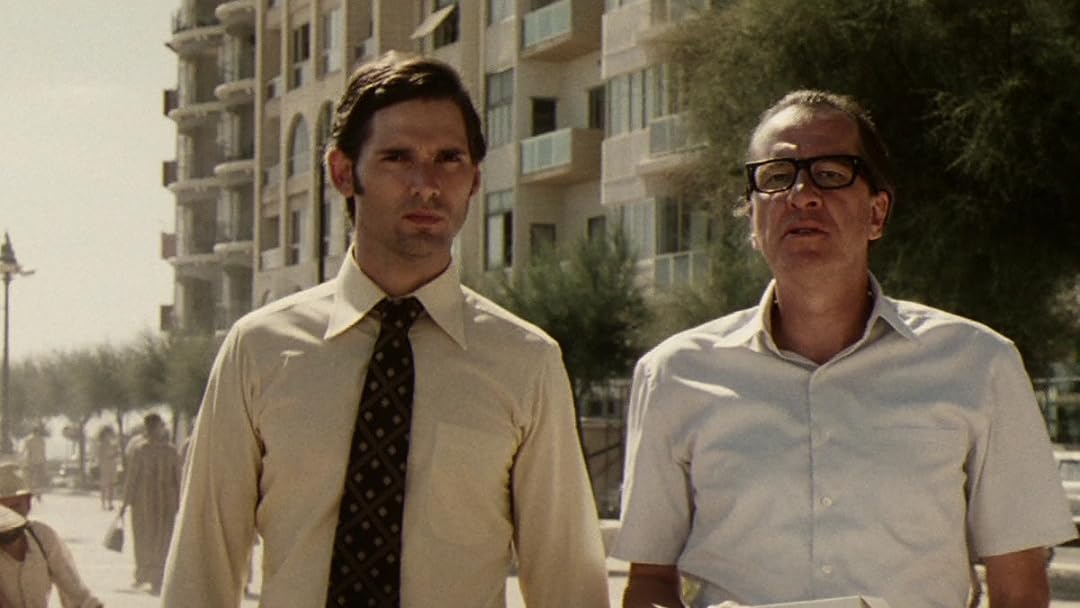 (3,644)
7.52 h 44 min2006X-Ray16+
After the Black September capture and massacre of Israeli athletes at the 1972 Olympics, five men are chosen to eliminate the people responsible for that fateful day.

Matthew D'SouzaReviewed in the United States on March 30, 2018
5.0 out of 5 stars
Munich Is Still Relevant Today
Verified purchase
Steven Spielberg asks us what does home cost? What is the value of life? What lengths must we go to ensure safety for our country, our ideals, or our families?

Munich is an thoroughly haunting film that depicts the terrorist attacks at the 1972 Olympics in Munich. Spielberg painstakingly recreates these horrors so that we might see their barbarity in full. He also details the retaliatory effects from the Israeli government's secret unit of assassins who hoped to avenge the Munich attacks by killing the 11 Palestinian terrorists who organized the attacks.

Munich is part historical and meticulous in Spielberg's attention to detail, while also delving into the emotional stress that the Israeli assassins underwent along with the dehumanization their Palestinian enemies. The fascinating aspect is that both sides, Israel and Palestine, are humanized as real people with complex beliefs, ideals, missions, goals, and a unified desire for an independent country. They all wanted a home. They all had families. It is an incredible movie that takes the time to appreciate and attempt to understanding the other side's story.

The acting from Eric Bana, Ciaran Hinds, Daniel Craig, Geoffrey Rush, and Mathieu Kassovitz is truly extraordinary. They each represent complex characters with hopes and dreams. They are all given realistic motivations and reservations about their assignment. They each beautifully perform their respective parts with subtle detail and deep emotional impact. Spielberg balances excellent performances from the entire cast. Munich boasts not only Eric Bana's best performance ever, but also Ciaran Hinds as well. You get to witness the horrors of terrorism, assassination, espionage, gun combat, explosive detonations, and the deterioration of Bana's mind. The effects of his work destroy his character's peace of mind. He slowly breaks down wondering was it all worth it. Paranoia. fear, anger, exhilaration, uncertainty, and cunning are all on full display in Munich.

Munich also incorporates many long panning shots, unique parallel edits, tense still moments, and beautiful close ups. Spielberg's eye for gorgeous cinematography and camera angles persists in stunning fashion throughout Munich. The establishing pans of the visited cities are so cool as characters will walk down an entire street with the camera steadily following them the whole way down. It's astonishingly skilled camera work in every scene. Munich is so well filmed, you'll be breathless in every scene, after every sequence, alongside each nerve testing situation. You are experiencing these instances of violence right alongside the assassination squad members.

Additionally, John Williams score is totally unique to his storied career of composing music for films. It's dark and haunting, adding to the tense situations of each scene. His musical cues parallel the action and violence with intense swells and nervous suspense with every moment. William's score is also sonically unique in his career as he leaves his classical routes for a modern, dynamic, and bombastic aural assault on your senses. It's impressive and keeps you on edge for Munich's duration.

Finally, Spielberg's Munich is perhaps his last great classic film. He proved that he could still make a great, engaging, and indeed, enduring cinematic statement even in 2005. Not until he returned with War Horse, Bridge of Spies, Lincoln, and more recently, The Post did Spielberg shine as brightly. Still, Munich is even more mature and profound in its message and portrayal of violence. Spielberg's comprehensive and thoughtful perspective makes Munich as relevant and gripping as when it was released in 2005. For an inspired take on terrorism and retaliation, watch Steven Spielberg's masterful Munich.

Biblio-NutReviewed in the United States on October 24, 2019
3.0 out of 5 stars
AS good story marred by over-moralization.
Verified purchase
The same story was done nearly 20 years before using the same source as a Canadian TV mini-series, called "The Sword of Gideon," and directed by Michael Anderson. It was also shown on HBO. Both versions cover many of the same events. Apparently, Spielberg saw it necessary to redo the story of Israel's avenge of the 1972 Munich Olympics massacre of its athletes by Palestinian terrorists. His motivation may have been the Second Intifada, which involved renewed violence between Israelis and Palestinians that began in 2000 and ended in 2005. Spielberg is telling the story pf Israel's revenge with his usual high craftsmanship and production values. But his ultimate theme is the futility of violence to settle political issues. He appears to equate Palestinian terrorism with Israel's desire to punish the terrorists, which made "Munich" controversial among many Jewish groups and viewers. Spielberg's over emphasis on Avner's anguish, paranoia and guilt over his role as head of the Israeli assassination was also a downer for this viewer. In Michael Anderson's 1986 version Avner also shows regrets over his role and involvement with Mossad but without the over moralization on the futility of violence. In the epilogue of the earlier production Avner eventually returns to the IDF.
7 people found this helpful

joel wingReviewed in the United States on July 7, 2020
4.0 out of 5 stars
Questions what did Israel's eye for an eye strategy against Palestinian terrorists cost?
Verified purchase
Munich is about the aftermath of the 1972 terrorist attack upon members of the Israeli Olympic team in West Germany by the Black September group. 11 athletes were taken prisoner and all were killed. Israel decided to take revenge against leading Palestinians with an eye for an eye approach. Eric Bana as Mossad agent Avner Kaufman leads a team tasked with the assassinations across Europe. The movie asks at what cost did Israel take this approach.

The movie raises questions about the Israeli policy. For instance, at one point Avner said he preferred his team used bombs to kill Palestinians rather than guns because no one hears about shootings but bombings spread terror. They’re doing what they condemned. Another time Black September responded to the team by sending a series of letter bombs highlighting that terror just leads to terror and doesn’t deter or decrease it. Towards the end the team notes that Black September’s leadership had been decimated but new ones emerged and other groups were formed and the bloodshed never stopped.

Palestinians are also given an opportunity although most times they’re just getting knocked off. In one scene Avner is posing as a European Leftist and is in a hallway with a Palestinians and they discuss statehood. Avner says there are plenty of Arab states Palestinians can go to. The Palestinian rebuts that by saying that a homeland means everything even if takes decades to achieve.

In the end, the mission takes an unexpected toll on Avner as well, which emphasizes the personal cost of the strategy.
C
5 people found this helpful

D. Hadley RayReviewed in the United States on August 19, 2018
1.0 out of 5 stars
It’s the G rated version. Overly edited.
Verified purchase
I have seen this movie before and hate the editing of the more brutal scenes. It happened, and I feel it suffered accordingly. I hate the edited version.
20 people found this helpful

SGReviewed in the United States on November 22, 2019
2.0 out of 5 stars
The rarest of things to me, a dreary Spielburg film...
Verified purchase
I have an absolute memory of watching the events of the Munich Olympics on ABC as they happened.

I admit, I'm not sure what expectations I brought to this or what I expected to get from it.
Whatever I went into this expecting to see I was, as always, impressed with the Spielberg direction and control.

But outside of the complex machinations of making such a location and event heavy film, I guess I simply felt weary and older without comfort at the end.

It was well made, but I'm just not entirely sure why he wanted to make it.
If the idea was all violence inevitable damages everyone in endless ripples of the human pond, well..., point made.

An extremely rare thing for me to say about a film of any kind: I'm actually sorry I watched it.
5 people found this helpful

When Avner [ Bana] is hand picked by Golda Meier to hunt down the Palestinian masterminds behind the 1972 killing of Israeli athletes at the Munich Olympics, he undertakes his mission enthusiastically though it will mean leaving his lovely young wife and baby behind for perhaps years. Of course, everything is off record and independent of Mossad, though he will be bankrolled and reporting to an intermediary.

With his team and a quirky French contact who supplies information about the locations of the Palestinians, he tracks them down one by one, eventually realizing it is not that easy to kill human beings-and even more shockingly that he has been sent to eliminate the Palestinian leadership --who were not necessarily involved in the Munich affair.

Fantastic recreations of the 1970's in European settings, and a marvelous accidental confrontation with Palestinian guerrillas which leads Avner to question some of his most cherished suppositions make this a mature Spielberg production-though not quite in the same league as Schindler's List.

If you don't mind slow pacing and are interested in moral/ethical issues more than chases and shoot-outs, this is a good choice.
30 people found this helpful

frazier991Reviewed in the United States on June 16, 2021
5.0 out of 5 stars
True spirit of islam
Verified purchase
As rockets rain down on Israel-we see nothing has changed. Islam is evil. All acts of terrorism are not at all extremists but perfectly in line with the teachings of Muhammad. He laid the groundwork called abrogation. Wherever any part of the Quran conflicts-the latter always trumps the former-all the "peaceful" verses of course are former and the violent murder and rape orders are the latter. Islam is a despicable cult of hate and violence-referring to Jews as pigs. This isn't rocket science-just evil rocket violence. Never trust Islam-ever.
2 people found this helpful

Michael GriffithReviewed in the United States on July 17, 2018
5.0 out of 5 stars
When a good plan for revenge goes very wrong
Verified purchase
Munich is a timeless masterpiece of how a good plan for national revenge can turn sour, ruin lives, and leave both sides in worse shape than when they began, and the world less secure rather than more. The film begins with the kidnapping and death of the Israeli athletes at the 1972 Olympics, and Israel decides to send a team of Mossad assassins out to kill the terrorists responsible for the planning and carrying out of the kidnapping. Eric Bana does a great job of portraying an agent who comes to doubt the validity of what he is doing, as each assassination does not go as planned, and he sees he is not only killing terrorists, but destroying their families in the process. Directed with Steven Spielberg with both a lot of tension and empathy, Munich is a cautionary tale. The DVD was in great shape and arrived quickly. Happy to see this great film again.
7 people found this helpful
See all reviews
Back to top
Get to Know Us
Make Money with Us
Amazon Payment Products
Let Us Help You
EnglishChoose a language for shopping. United StatesChoose a country/region for shopping.
© 1996-2022, Amazon.com, Inc. or its affiliates