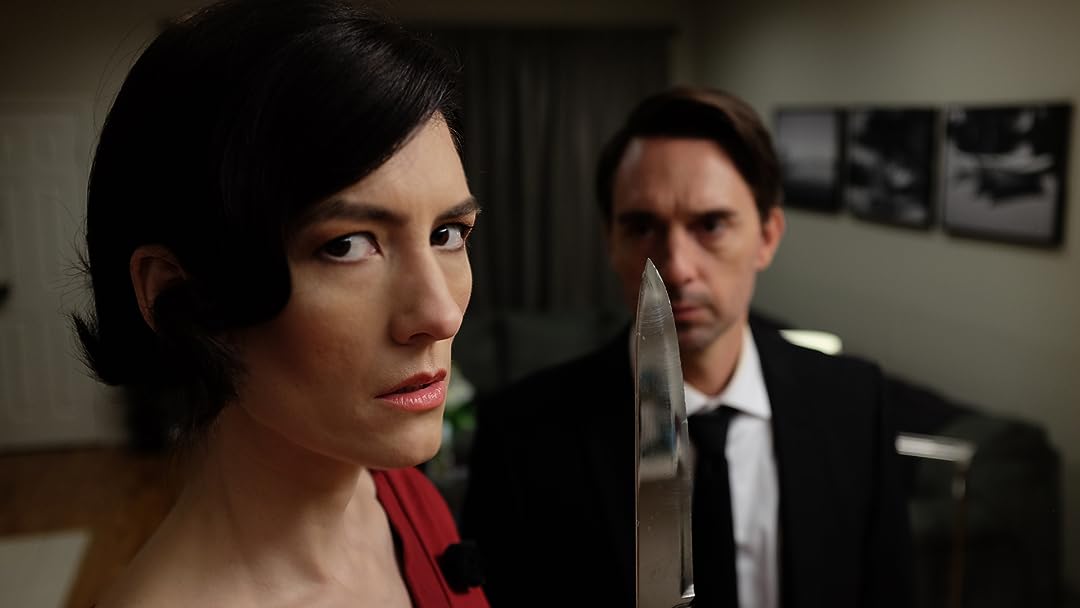 (94)
5.31 h 16 min201916+
Best pals Joan and Michael invite their dearest friends over for a cordial dinner to discuss the passing of Joan's husband, Neil. But as each guest arrives, dark secrets are revealed and murder is definitely on the menu...

Roger MoffattReviewed in the United States on July 9, 2020
1.0 out of 5 stars
Like a student entry for film school - and they flunked
Verified purchase
Oh dear, how did I mis-judge this so badly?

I should have been warned off by the absence of mainstream reviews but as we quite like a good murder mystery and this was available on Prime, and the covid-19 lockdown has gone on for a very, very long time now - what was there to lose?

It looks like an entry to a film school where the director has persuaded his friends to act - and I say this having been camera operator for just such an enterprise in the past. The premise of film is fine and the theatre style shooting probably reflects the lack of a budget, but the low production value and the, shall I put it politely, variable quality of the acting (from very clichéd characters) results in a stilted and poorly directed film that starts to drag before more twists unfold. It was strange the things that caught my attention - the visual quality of the food presented during the various 'courses' looked as if it had been thrown together by the crew, plonked on a plate and then lit by whatever flat lighting happened to be in the room - so many wasted opportunities for relatively little additional budget to make these key moments actually look like a feature film than a student film.

If you enjoy low to zero budget films and are prepared to give something a little different a whirl, then if you're getting it 'free' with prime there's no real downside other than the time spent. If you were paying full price or even (remember those days?) paying for a ticket at the cinema, then I think you may be left wanting a refund.

There are much better murder mysteries out there, your life won't miss this one.

Amazon CustomerReviewed in the United States on July 4, 2020
5.0 out of 5 stars
i liked it totally surprised
Verified purchase
i wanted to turn it off as soon as i heard the music but my wife wouldn't let me cause once she starts something nothing short of a heart attach will make her stop liking has nothing to do with continuing for her, but after the first murder i was hooked even though i thought it was a play on a stage. well done
8 people found this helpful

D. SalerniReviewed in the United States on August 24, 2020
4.0 out of 5 stars
Surprisingly Twisty
Verified purchase
I understand the 1-star reviews. I almost turned this off in the first half hour. But, since I had nothing better to watch, I kept going -- and enjoyed it more and more as the improbable storyline played out. In the end, the twist I never saw coming painted everything in a new light.

Not as brilliant as MOUSETRAP, which is referenced several times in the movie, but still an enjoyable murder mystery.

Recommended for an evening when you're in the mood for the unusual, for dark humor, and for a slice of well-deserved justice.
4 people found this helpful

Susan GillReviewed in the United States on April 28, 2021
1.0 out of 5 stars
Acting class 101
Verified purchase
I am home with a head cold and wanted to watch something than Midsomer Murders whichI always seem to gravitate towards. Amazon promoted Murder Made Easy so I thought I would watch. A more significantly waste of time I can hardly imagine. It is a screenplay whose capacity for sickness seems to be married with banality making a particularly terrible film. I hate films like this where people are driven to their lowest possible element full of evil and violence. The plot revolves around a recent widow and her late husband's best friend who invite friends to dinner on the anniversary of her husband's death. What ensues from there is a ridiculous story of murder and revenge that no coherent reason for this plot which made it even more unwatchable. I ended up scrolling through the film since I just couldn't bear it but wanted to see where it was going. Where it ought to have gone was in the trash. The acting was absolutely awful. But perhaps they were only reciting a script barely fit for a first year college student. I could see in my mind the actors rehearsing the lines in the bathroom mirror and then heartily performing them on stage . I knew it was going to be bad when I could see the entire action was in an unattractive dining room in what looked like a one room apartment with a basement conveniently located to throw a guest down the stairs. I had hoped that when the murdered guests reappeared , it was going to be a ghost story with a Hitchcock twist but alas no. Please spare yourself the misery of watching this movie and be glad you are not as painfully skinny as the asexual leading actress . I thought The Skeleton Key was my pick for worst movie, but at least it provided some laughs. This movie is best left alone.
One person found this helpful

Yafa Crane LuriaReviewed in the United States on August 3, 2020
1.0 out of 5 stars
D for effort.
Verified purchase
If I were assigned to write a script that would get me a D in a script writing class, this would be it. The characters are so narrowly conceived, the dialogue is laughable, the last scene is ridiculous. The is one good scene. D for effort.
4 people found this helpful

Tony KeltsReviewed in the United States on July 16, 2020
3.0 out of 5 stars
It is entertaining.
Verified purchase
There is a little Hitchcock and a nice plot twist. It is not original but it does seem a bit better than a lot of the 21st century movies. I enjoyed it but the shot on video look really took something away from the movie.
4 people found this helpful

Susan SmithReviewed in the United States on August 2, 2020
1.0 out of 5 stars
I want a refund!
Verified purchase
I wish I could get a refund on the time I spent watching this. this was a complete waste of an hour plus. I didn't look at the reviews and so I supposed I can't blame anyone but be warned- safe yourself! staring at the wall for a hour and a half would be a better use of your time.
2 people found this helpful

Kindle CustomerReviewed in the United States on July 15, 2020
5.0 out of 5 stars
Very pleasantly surprised.
Verified purchase
I expected nothing from this film and was pleasantly surprised to find it very enjoyable. Kudos to all the actors in the last scene; their facial expressions reflected their realization of what had happened.
3 people found this helpful
See all reviews
Back to top
Get to Know Us
Make Money with Us
Amazon Payment Products
Let Us Help You
EnglishChoose a language for shopping. United StatesChoose a country/region for shopping.
© 1996-2022, Amazon.com, Inc. or its affiliates