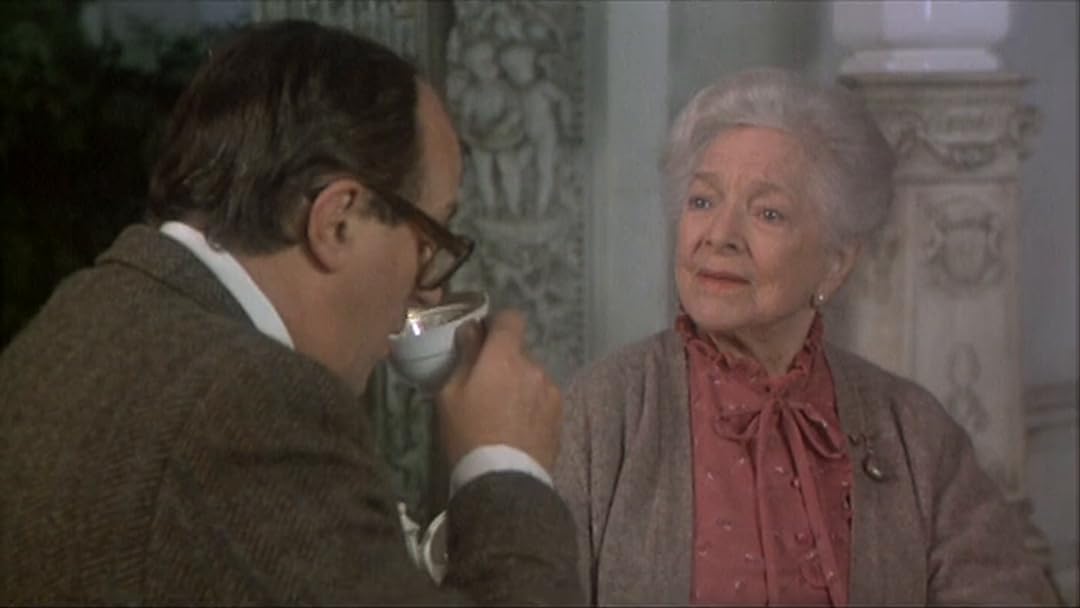 Emmi331Reviewed in the United States on April 14, 2022
1.0 out of 5 stars
Sad to Say....
Verified purchase
I really wanted to like this, but it was awful. The acting is wooden, the script is less than stellar, and Helen Hayes is just not a very good Miss Marple. The lead characters, all actors of high caliber, appear ready for the geriatric ward. Bette Davis, a trouper who gives it her best effort, is a disaster. The actress, who had suffered a stroke not long before the film, is clearly struggling with speech problems. Most of the rest of the cast seems to be phoning it in.
Except perhaps for a young Tim Roth, who gives an impassioned performance as a troubled teen. He's the only one who seems totally committed to his role.

Brian MorganReviewed in the United States on August 25, 2017
5.0 out of 5 stars
Carrie Louise
Verified purchase
The present writer loves this little film, "Murder with Mirrors" (1985), après Dame Agatha Christie, since it is the only joint appearance of two of his favorite actresses, Helen Hayes and Bette Davis. The young Tim Roth is also seen, early in his career, and Dick Lowry directed. The fine score is by Sir Richard Rodney Bennett, who also scored the classic "Murder on the Orient Express" (1974).

In truth, Miss Hayes, in her final film, does seem too American (despite her early success in “Victoria Regina”), but her great warmth and charm conquer all. Miss Davis, with her unconquerable spirit, seems so vulnerable that she wins our compassion--and our hearts. In this film, we have two of our greatest personalities from the stage and from the cinema.

Cathy ScottReviewed in the United States on April 26, 2022
4.0 out of 5 stars
Helen Hayes was brilliant as Miss Jane Marple.
Verified purchase
I believe I saw a Harry Potter character in there. And poor Better Davis. She had had a stroke it looked like and she was still giving a command performance as only she could. Despite all the word, it seemed, Helen Hayes and Better Davis gave us their all and I enjoyed it.

bdkelleyReviewed in the United States on September 10, 2019
1.0 out of 5 stars
Worse than meh...
Verified purchase
There are not many movies I give up on - but this was one of them. Helen Hayes (Miss Marple) was cute in her role, and Leo McKern (Inspector Curry) served in a complementary character. The scenes containing their interchanges were entertaining. As for the rest of the movie, it was worse than meh.

A. BergerReviewed in the United States on May 25, 2014
3.0 out of 5 stars
Not quite Ms. Marple
Verified purchase
Helen Hayes is a wonderful actress but she does not quite fit the bill when playing Miss Marple. Miss Marple, in Margaret Rutherford's version, is a self-assured woman who speaks her mind and takes no nonsense. Here, she appears to be a timid woman who is easily startled and intimidated by those around her. The Miss Marple I know would not put up with the young woman who drives like a maniac, is spoilt and entirely self-absorbed - no, she would have told her off or at least voiced some criticism or displeasure. Instead Helen Hays is apologetic, making excuses for her "snooping" and generally appearing as if she wanted to say to everyone "Excuse me for living." . Miss Marple would never do that. Not at all what I expected given the cast of actors.
3 people found this helpful

cypReviewed in the United States on January 30, 2018
3.0 out of 5 stars
Nostalgic but dull.
Verified purchase
Agatha Christie fan for years. Watched because of Hayes and Davis. Not their best work by any measurement. Realized Davis had had stroke earlier - good effort - but no go. Boring
One person found this helpful

PianoMom54Reviewed in the United States on November 13, 2016
5.0 out of 5 stars
Can't go wrong with Bette Davis and Helen Hayes!
Verified purchase
Two of my favorite actresses together! Can't go wrong with an Agatha Christie story either. Well done. Made me feel very nostalgic!
3 people found this helpful

Old CodgerReviewed in the United States on November 5, 2015
5.0 out of 5 stars
GRRR8 overall!!!
Verified purchase
I really have mixed emotions about this particular presentation. I, as usual, was overjoyed with Helen Hayes' performance but the appearance of Bette Davis in her waning years was almost too much to deal with. In this presentation, Miss Davis was, as usual doing her best, but was obviously having great difficulty in everything she did due to her having to deal with her VERY advanced physical and mental problems of old age. It left me with a feeling of great sadness!

However, the story line and presentation as a whole was marvelous and the cast was truly outstanding. Another coup for Agatha Christie and Helen Hayes!
2 people found this helpful
See all reviews
Back to top
Get to Know Us
Make Money with Us
Amazon Payment Products
Let Us Help You
EnglishChoose a language for shopping. United StatesChoose a country/region for shopping.
© 1996-2022, Amazon.com, Inc. or its affiliates