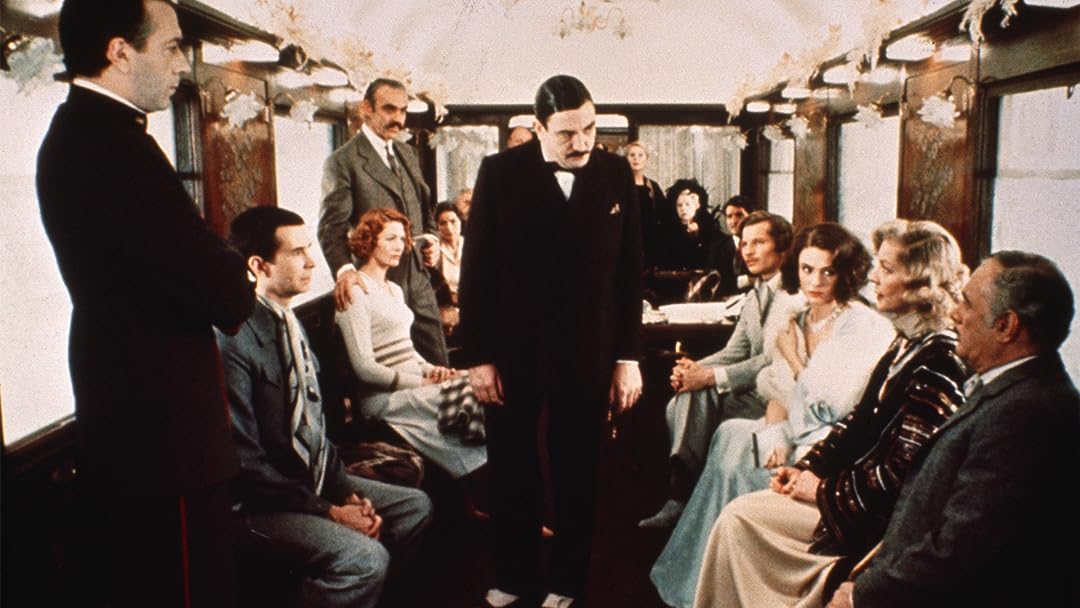 Murder on the Orient Express

(13,330)
7.32 h 7 min1974X-RayPG
When a snowstorm stops the Orient Express train in its tracks, famed detective Hercule Poirot (Albert Finney) finds himself in the middle of a murder mystery where everyone on board is a suspect. Adapted from Agatha Christie’s classic novel.

Kat RykerReviewed in the United States on March 31, 2018
5.0 out of 5 stars
I want to say "more stars"!!!
Verified purchase
I watched this movie when it was first in the theaters. Then I watched all the remakes and realized there is nothing better than the original. Yes, they could have cast it differently, but I don't think it would have improved the movie. The one thing, the BIG THING that makes this movie stand out is that they used the actual train cars and photos of the actual train. I've ridden on this train twice and the remakes ignored the fact that the train is out of this world! It speaks to an era that we've lost in this world and we need to get back (that's why the train is always booked solid).

The opening scenes of the train were shot with cars that were not operating. At the time the movie was shot, if I'm not mistaken, the train was not running and the cars were shot as they were sitting unused. The car where Poirot does his interrogating is the Lalique car, named that because of the priceless Lalique panels gracing its walls. The shots of the corridors with a stained glass window? Those were shot in the current kitchen/baggage car. Wonderful movie and a great bit of acting (and sometimes overacting).

P. JacksonReviewed in the United States on November 23, 2018
1.0 out of 5 stars
I Tried, I Really Did
Verified purchase
As a long-time lover of English mysteries, including Christie, Poirot and everything ever on PBS or the BBC, I so wanted to love this. Branagh is a brilliant actor, but he never inhabits Poirot. His acting here is always "acting." Despite the lush cinematography and sets and the wonderful cast, this movie never left the train station for me. With the central character so hammy, there was no cohesion. I love Johnny Depp, but he rseemed to phone this one in. No one else really sparkled after the little boy who fetched the eggs at the beginning. I hate to say I strongly disliked this. I even came back later and tried it again and was still disappointed. Maybe you'll like it better than I did, especially if your expectations are low.
71 people found this helpful

AnonymousReviewed in the United States on October 22, 2018
3.0 out of 5 stars
eh.
Verified purchase
This is a review for the *Kenneth Branagh* version -- reviews for different versions seem to be lumped together, and I think positive reviews for the old one are skewing the average under the new one.
I couldn't get past Branagh's fake accent and fake moustache. It seemed very self-indulgent, since he was directing and starring. I feel like if the director and star had not been the same person, the director would have been like "ew, fakey accent." The rest of the characters are great actors too, but the rest of it also seemed melodramatic and caricatured and sort of fake to me. I rarely have trouble "suspending disbelief" because I don't expect stuff to be perfect, but this was one where I couldn't help seeing it as a bunch of famous actors dressed in Halloween costumes prancing around.
41 people found this helpful

Big MommaReviewed in the United States on October 22, 2019
2.0 out of 5 stars
Oh, no, no, no....
Verified purchase
I bought the video, thinking Kenneth Branagh is so talented, he could hardly ruin this. Well, he did. Or someone did....

He is not a good Poirot. Not close, not even a whiff of the character of the great detective.

Johnny Depp is kind of perfect in his role, however. He shines in this turkey of a film, which throws every politically correct trope into the mix.

There is that Jewish family (all of a sudden) , the interracial couple (all of a sudden), and here we are in modern day Hollywood, where Agatha Christie would have probably sued the company that adapted her work this way. I bought this movie on amazon, based solely on the Branagh participation. I wish I could have that money back. Ugh.

I have not even been able to finish watching it. I expect some LGBT character to become part of the plot, but I hope not. If there is a twist to the story that involves climate change, I'll have to throw a tomato at the screen. A non-GMO tomato, of course.

Tom WalkerReviewed in the United States on July 20, 2017
5.0 out of 5 stars
One of the great movies of all time
Verified purchase
Sidney Lumen got great actors to participate ensemble. Richard Widmark said he took the role just to meet some of the other actors. Several of the actors said it was great fun. It all shows through. Beautifully and elegantly filmed. A must view movie. 40+ years later it looks as good as it did back in the day.
63 people found this helpful

The CeltReviewed in the United States on January 12, 2018
5.0 out of 5 stars
Wonderful film!
Verified purchase
This movie was so well done! It is much better, in my personal opinion, than the newer film that just came out. It is an intriguing film, with lots of character plot, and the special effects are at a minimum. We loved the film!
35 people found this helpful

MorningDoveReviewed in the United States on March 29, 2018
4.0 out of 5 stars
More serious movie than expected
Verified purchase
Well made movie. Lots of big names that don't disappoint. Fortunately we didn't remember how the story went from previous iterations, so the ending was a good surprise. Thought provoking ending. Would recommend. Not as light-hearted as I would have thought the story would be. I had expected a bit of a spoof of the original, but it wasn't.
27 people found this helpful

Michel A. GaudiniReviewed in the United States on December 26, 2016
5.0 out of 5 stars
Love It!
Verified purchase
I loved the movie
I loved the plot ( for once the murderers don't go to jail and we are happy for them!)
The stars are all big but they all play at the same level.
The Orient Express is pure sophistication.
The outfits are so glamorous ( those of Lauren Bacall and Jacqueline Bisset!!!).
To me this movie is still a feast for the eyes !
PS : Look also at the costumes in Evil Under The Sun!).
Fun fact : The Orient Express still offers trips from Istanbul to Paris!
I should not say offers since the tab is between $7000 and $15.000 per person !!!! But you will have your own butler lol.
44 people found this helpful
See all reviews
Back to top
Get to Know Us
Make Money with Us
Amazon Payment Products
Let Us Help You
EnglishChoose a language for shopping. United StatesChoose a country/region for shopping.
© 1996-2022, Amazon.com, Inc. or its affiliates