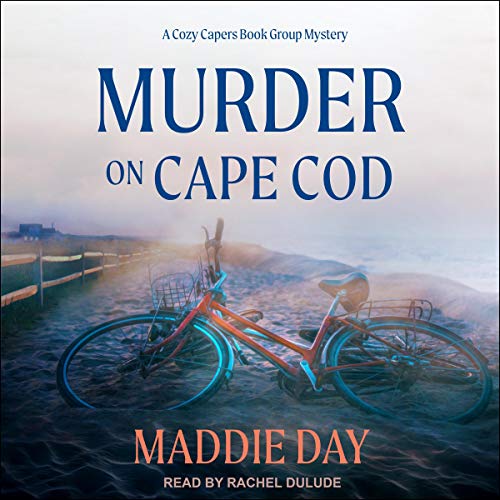 A Cape Cod shop owner and her book club must find a crafty killer in this charming new series from the Agatha-nominated author of the Country Store Mystery series.

Summer is busy season for Mackenzie "Mac" Almeida's bicycle shop, nestled in the quaint, seaside hamlet of Westham, Massachusetts. She's expecting an influx of tourists at Mac's Bikes; instead she discovers the body of Jake Lacey. Mac can't imagine anyone stabbing the down-on-his-luck handyman. However, the authorities seem to think Mac is a strong suspect after she was spotted arguing with Jake just hours before his death. Mac knows she didn't do it, but she does recognize the weapon - her brother Derrick's fishing knife.

Mac's only experience with murder investigations is limited to the cozy mysteries she reads with her local book group, the Cozy Capers. So to clear her name-and maybe her brother's too - Mac will have to summon help from her Cozy Capers coinvestigators and a library's worth of detectives' tips and tricks. For a small town, Westham is teeming with possible killers, and this is one mystery where Mac is hoping for anything but a surprise ending.

Your audiobook is waiting!
Learn more about membership
List Price: $17.49
You Save: $2.19 (13%)
By completing your purchase, you agree to Audible’s Conditions Of Use
Sold and delivered by Audible, an Amazon company
Share

Baroness Book Trove
5.0 out of 5 stars Can Mac clear Derrick's name?
Reviewed in the United States 🇺🇸 on August 27, 2022
Verified Purchase
Murder on Cape Cod by Maddie Day is a fun cozy crafts and hobbies culinary mystery that will keep you guessing.

Mackenzie "Mac" Almeida
Mac Almeida is our sleuth, even though it is a reluctant part on her end. Since she found the body, she feels obliged. She is a part of a cozy mystery readers group that meets every Tuesday to go over that week's book. Honestly, I wouldn't mind being a part of this group. The whole group wanted to help Mac solve the case like they had read about in their books. Mac only agrees to do it because she's afraid of her brother being pegged as the murderer.

She's the youngest of three siblings and loves her older brother a lot. Mainly because of her niece Coquille, whose also known as Cokey. So when you put all of that together, Mac wants to ensure that Derrick can be with his daughter again. I, honestly, like Mac as a sleuth. The way she was written not to want to go along with the whole thing was perfect. It read as if it actually happened in real life. Everything about this character screams genuine to me, and with that in mind, I probably wouldn't mind being friends with her in real life.

The Mystery
Coming home from that Tuesday reader's group meeting at her brother's lighthouse, Mac stumbles upon the body of a guy she was seen arguing with earlier that day. Mac assures not only their police chief, an old classmate of Mac's, but also the state police detective sent in to help their police force out with this case that she and her brother didn't kill the guy.

I knew it wasn't Derrick as he was an obvious red herring, but I was stuck between two other people. However, I ruled out the first one after voicing my opinion out loud to myself last night as I wanted her to be it for not liking cozy mysteries. The other person was a genuine thought as I didn't like her.

Five Stars
Murder on Cape Cod by Maddie Day is a great book to read if you wish to escape reality for a bit. I loved visiting their small town of Westham on Cape Cod in Massachusetts. It was nice. Ms. Day has a great way of bringing her readers to wherever the story occurs. Thought thanks to this story, I have a craving for saltwater taffy. Mac, her family, her friends, and everyone else Mac met in this mystery felt real to me.

Also, the fact that Mac has an African Gray named Belle cracked me up. I loved that bird in this story a lot. She brought in a bit of humor in some places after we left a heavy mystery scene. I am giving Murder on Cape Cod by Maddie Day five stars and a recommendation for anyone that's looking for a new cozy mystery series. Well, not this-year-new but new for me.

This book also has recipes in the back, so don't forget to check those out. They are Stephen's Killer Pizza, Tim's Cranberry-Orange Bread, Cape Cod Wine Spritzer, and Tim's Seared Scallops. These all sound so delicious!

Thank you for dropping by! I hope you enjoyed this review of Murder on Cape Cod by Maddie Day.

Until the next time,
Karen the Baroness

If you would like to see other reviews like this one, check out BaronessBookTrove.com.
Read more
2 people found this helpful
Helpful
Report abuse

Bez C
4.0 out of 5 stars Good read for all
Reviewed in the United States 🇺🇸 on November 21, 2022
Verified Purchase
Characters were well developed and believable. Easy read. Can put down and pick back up without getting lost in the story. .
Read more
Helpful
Report abuse

lah
5.0 out of 5 stars Murder on Cape Cod is a hit with me!
Reviewed in the United States 🇺🇸 on October 15, 2022
Verified Purchase
First in series and pleasantly surprised by how much I love these Characters. My heroines are usually more homey (bakers, inn keepers, etc.) so wasn’t sure about a bike shop owner and her lighthouse keeper brother. But I love Mac and her relationship with her brother Derrick. Nice way of tying in the ancillary characters too. Looking forward to the next book in this series.
Read more
One person found this helpful
Helpful
Report abuse

Mac Almeida has a life she truly enjoys. She owns a thriving bicycle business, she has a fabulous boyfriend, her family is close by, and her tiny home is just perfect for Mac and her pet African Grey parrot. With everything in her life going swimmingly, Mac doesn’t suspect her life is about to turn upside down.

One of Mac’s favorite hobbies is her weekly book club meeting. She and her friends read nothing, but cozy mysteries and it is on the way home from one of these weekly meetings that Mac literally stumble upon a dead body. Finding a real body is nothing like her beloved cozy mysteries and Mac is horrified to note, not only does she know the victim, but he seems to have died with a custom fish knife owned by her brother. In the blink of an eye, Mac’s perfect life has turned upside down.

Knowing her brother isn’t the slightest bit capable of such a violent act, Mac sets about trying to prove his innocence. That task would be easier by leaps and bounds if Mac knew where her brother has skittered off to. His absence is not only alarming but the impression it leaves the police is that he has something to hide. Until she can find her brother and get some straight answers out of him, Mac turns to the only group of people she trusts to help her work out the murder, her cozy mystery reading group.

Every member of the cozy mystery group lives and works in the area and if anyone is going to put this mystery to bed, it’s going to be them. With a list made and divided among the members, all set out to collect clues, talk to potential suspects, and share their notes with the rest of the group. Of course, as with most serious crimes, the actual culprit has no interest in being caught and the police have no interest in a group of amateur sleuths messing about in their investigation. Unfortunately, for both the culprit and the police, Mac and her crew have intention of giving up on clearing the name of one of their own.

The Bottom Line: I rather enjoyed this little cozy mystery. The author has done a fine job of setting the scene for this series and the scene certainly enhances the overall read. The lazy little beach town vibe is perfect for the cast of characters and the story. Mac’s bike shop is centrally located making it a great location to revolve the story around. The bike shop also gives the reader the opportunity to meet more of the community/people who play a part in the mystery. In all, I was happy with this read and eager to dive into book two following the completion of this book.
Read more
2 people found this helpful
Helpful
Report abuse

Lois Fisher
4.0 out of 5 stars Good Cozy Mystery
Reviewed in the United States 🇺🇸 on July 6, 2022
Verified Purchase
The bike shop rental and repair shop is a new setting for a cozy, and I appreciated that. The mystery was good, too (even if the murderer was easy to pick out -- the underlying why was not). I also enjoyed the fact that the heroine, Mac, already had a boyfriend, and the reader didn't have to agonize over her falling in love with the detective. Also liked Mac's family -- father a pastor, her mother an astrologer! The one thing that didn't work, however, was Mac. I read over 150 pages before I could get any grasp of this woman. Ms. Day told us a lot about her, but she failed to show good or bad qualities. Do recommend this for cozy mystery lovers.
Read more
Helpful
Report abuse
See all reviews

Dallass
3.0 out of 5 stars An average cosy.
Reviewed in Australia 🇦🇺 on January 31, 2021
Verified Purchase
I’ve read the other series by the author so had high expectations for this book. However as much as I liked the setting and Mac, I just didn’t enjoy the other characters that floated around her all that much. The BF, Tim, plays a very small part, and the woman who at the beginning of the book was hinted at being her nemesis, Laitinen, wasn’t. A bit of a let down that was.

The mystery was simple, and Mac had the suspect clocked early on, so there wasn’t as much investigating, or using of the little grey cells required by the reader to untangle the mystery. Not bad, just not as demanding as I’d hoped.
Read more
Report abuse

Kindle Customer
2.0 out of 5 stars Ho hum
Reviewed in Canada 🇨🇦 on February 3, 2020
Verified Purchase
I was very excited to read this book, as I love finding new cozy mystery authors to read. Unfortunately for me the story and the characters just fell flat, and I lost interest in the book quite quickly.
Read more
One person found this helpful
Report abuse

JLo
5.0 out of 5 stars Great Read!
Reviewed in Canada 🇨🇦 on July 25, 2020
Verified Purchase
This author is new to me. Thoroughly enjoyed this book!
Read more
Report abuse