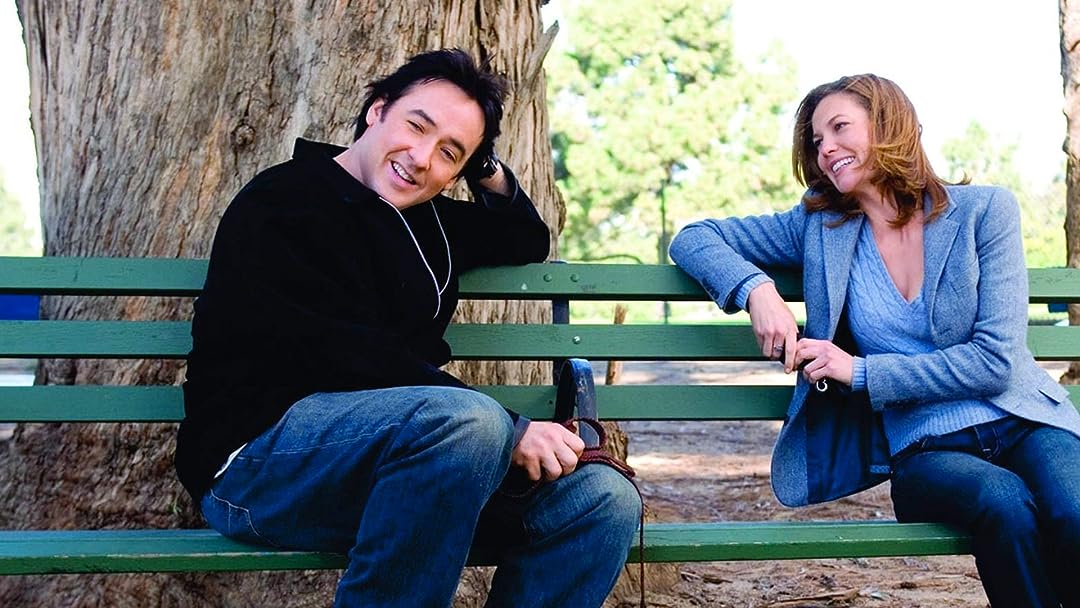 Benjamin M LambethReviewed in the United States on July 16, 2021
1.0 out of 5 stars
Its like watching an audition tape
Verified purchase
Need to simply pay the bills, so you agree to star in a film? That's the way to describe this slowly unfolding disaster. The two main characters (Diane an John) have no chemistry whatsoever and its as if they are portraying people who settling because they are burned out. They don't seem to really care if they work out or not (despite the lines they are saying) and you can feel it on screen. Johns eye liner and heavy makeup are clearly noticeable and the "Hugh Hefer" father uses his love for his deceased wife, as the excuse for leading on three different women. This isnt a love story, its a movie that is beneath the actors. Just garbage to pass the time. They could play this in an ER waiting room.
2 people found this helpful

Susan I.Reviewed in the United States on July 22, 2015
5.0 out of 5 stars
Dating after Divorce with Dogs.
Verified purchase
Ok, full disclosure: I love love LOVE Diane Lane. She is one of my top 3 favorite actresses. Swoon!

Must Love Dogs... what's not to love? This movie is cute. Diane Lane's character Sarah is recently divorced and her sister Carol (Elizabeth Perkins) signs her up for on-line dating. In turn, Sarah agrees to meet up with recently divorced Jake (John Cusack) at the 'Dog Park'. Neither of them owns a dog. Sarah borrows her brother's Newfie (my 2nd favorite dog) named Mother Teresa and Jake borrows his attorney's dog. They meet and Jake fails with epic proportions (but in a cute way). However, after a few weeks go by, they agree to try again, this time over dinner.
They hit it off, make out, realize neither one of them has "protection" so they drive around and for some inexplicable reason, none of the pharmacy's have what they need until the last one but by that time, the fizzle is gone and Sarah just wants to go home.

What can I say, Must Love Dogs is a cute Rom-Com and who doesn't love those?

C. WilleyReviewed in the United States on March 9, 2021
5.0 out of 5 stars
It's a good movie, also full screen.
Verified purchase
This is one of those movies you watch and think its a nice movie and the actors did a good job, Then forget about it. Years later while thinking about needing to buy a few used movies to add to my collection. I was looking at what was available in full screen. And there it was, $1.00 plus shipping, great deal. Had a movie night one nasty winter evening. I do recommend this movie,
One person found this helpful

AnjReviewed in the United States on October 5, 2014
5.0 out of 5 stars
I recommend this film to women and men
Verified purchase
Maybe the bottle of red wine helped, but being a financially and mentally stable women in her early 30s, I found this movie VERY relate-able. Oddly enough, I, too, am a proud parent of a canine kid. I caught myself laughable rather whole-heartedly through this film and a natural grin formed from beginning to end. Sure, it's a romantic dramedy, but it's a well-executed piece of cinema that is worth your three-dollars and ninety-nine cents. I did feel as though the ending was a bit rushed, but the editing of concatenating the story into an almost collage-like cuts into how the protagonist becomes a couple was acceptable and understandable.

I recommend this film to women and men, alike. In the 21st century where my type of life is (or has become) the new norm (i.e., online dating, networking mixers, concerned family, etc.), it's a delight to watch "Must Love Dogs". And, yes, it's imperative to find a significant other who loves dogs (and other earthly critters). Vive l'amour!
7 people found this helpful

Anna RounsevilleReviewed in the United States on October 14, 2016
5.0 out of 5 stars
A Perfect Movie for Grown Ups, and romantics.:D
Verified purchase
Great movie. Lively banter, good jokes. Lovely cast. A good movie to curl up on the couch, and watch on Amazon Prime late late at night with headphones. Delish laughs trying not to laugh too loudly so everyone else stays sleeping...Good luck! #Momlife Loved it so much I followed one of the authors of the screenplay (and the author of the book) here on Amazon on her Author Page, Pinterest, Facebook, and Twitter. Don't know if I'll buy it or just rent it again here when I get to craving it again. Also Christopher Plummer is just wonderful to experience in this movie, makes me want to read more poetry. And Man if I could look nearly as good as Diane in a few years my life would be made. One of my favorites with John Cusack. Just a perfect movie. :D
7 people found this helpful

teols2016Reviewed in the United States on January 10, 2014
4.0 out of 5 stars
A Romantic Comedy To Get on Board With...
Verified purchase
I always enjoy a story with characters whom you could find yourself sharing a drink with in the real world. "Must Love Dogs" fits the build, serving up a ground but very enjoyable plot of two New Yorkers who are "arranged" for a date online and then meet up at a dog park. This film never went off the rails in an attempt to be funny but remained funny throughout. And even though this film was set in the Big Apple, a place where just about anything can happen thanks to all the crazys living there, none of the characters were too excentric, showing us that sane people also live in New York City. Diane Lane and John Cusack had nice chemistry as the leading couple though my personal favorites in the cast were Molly and Mabel, the two Newfoundlands who played the dog Mother Theresa...wouldn't be my first choice for a dog's name, but I'll let that one go. The supporting cast was all great, never overpowering the main stars or the story and never diminishing themselves into small, forgetible roles. While this film would never be a candidate for the Oscars, it's certainly enjoyable and worth watching. Enjoy.
3 people found this helpful

Slade AllenburyReviewed in the United States on April 17, 2006
4.0 out of 5 stars
a real underdog
Verified purchase
No, Must Love Dogs is not a masterpiece. It is not as good a romantic comedy as The Philadelphia Story or Libeled Lady. But it is much better than Sleepless in Seattle, You've Got Mail, and most other contemporary examples of the genre. The cast is stellar. And I'm not just talking about the many well-known actors (Cusack, Lane, Plummer, Channing, Perkins, Mulrooney, etc). Probably the best performance of all comes from little-known Jordana Spiro. As Jake's would-be girlfriend, Sherry, she steals every scene she appears in. The filmmakers should have given her more to do. Spiro gets more humor and pathos out of her small role than most big-name actors ever manage to get out of even a starring role. And she's not the only secondary character to shine in this film. Ben Shenkman, as Cusack's friend Charlie, also manages to spin comic gold out of an underwritten part. Yeah, it's a one-note performance, but Shenkman at least manages to make that one note sound as if it is being played on the comic equivilent of a Stradavarius. He manages to make even throw-away lines such as "I know I am" and "Wouldn't that be nice" laugh-out-loud funny.

I'd be less than honest, however, if I did not acknowledge the occasional deficiencies in the script. One problem is the writers' complete disinterest in the characters' backstories. When Cusack and Lane sit together at an Armenien restaurant and reveal their previous love histories, the viewer gets...absolutely nothing. After going on and on about the need for total honesty in disclosing one's past to a potential lover, Cusack then gives Lane a one-sentence history of his life: He got beat up emotionally by a woman he really loved. That's it. Lane, in turn, reveals every bit as little about her own history. Curiously, Shankman and Spiro, whose characters are intentionally 2-dimensional, manage to make their parts memorable despite this deficiency. Cusack and Lane aren't so lucky. The thinness of their characters makes it difficult for the viewer to empathize with them much. Another failing is more typical of the contemporary romantic comedy: complete economic cluelessness. Lane is a divorced pre-school teacher; Cusack is a boatbuilder who has never sold a single boat. Yet they both live in luxurious digs, she in a huge old two-story bungalow, he in a spacious two-story loft. They drive nice cars and seem to have no financial worries at all. What's with that? The economic struggles of the characters in Zola, Balzac and other great novelists lend depth to their portraits. But in contemporary film, the economics are pure fantasy. No one ever needs to worry about paying a bill or cutting expenses. Had the filmakers of Must Love Dogs rooted the main characters a little more firmly in the real world, they might have given us a romantic comedy with real life. As it is, the film is a frothy and often delightful piece of entertainment with almost nothing to say about contemporary life.
3 people found this helpful

Denise D.Reviewed in the United States on June 25, 2021
5.0 out of 5 stars
LOVE THIS MOVIE!
Verified purchase
So I already own this on DVD but sometime I dont feel well and so I want a digital copy so I don't have to constantly be getting up. This is a funny, sad and just awesome movie in my opinion and I'm not a huge chick flick movie fan. You will want to both laugh, cry and maybe yell at the movie its just that good.
See all reviews
Back to top
Get to Know Us
Make Money with Us
Amazon Payment Products
Let Us Help You
EnglishChoose a language for shopping. United StatesChoose a country/region for shopping.
© 1996-2022, Amazon.com, Inc. or its affiliates