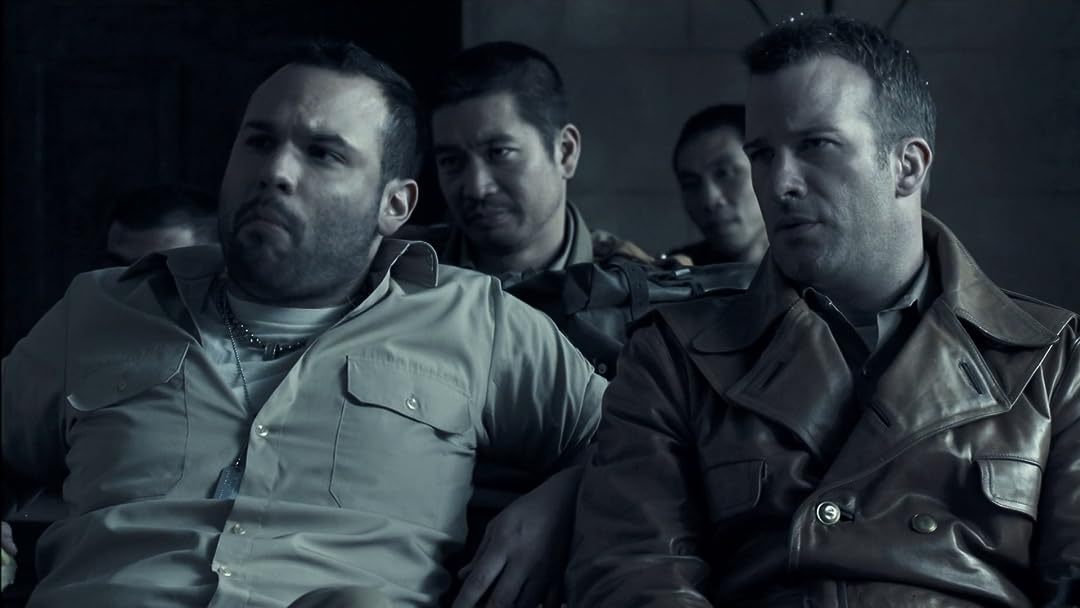 (1,074)
5.21 h 51 min2009X-RayR
In the year 2707, war rages between earth's four giant corporations as they battle over the planet's dwindling resources. In an era marked by warfare and social regression, the earth is on the verge of ruin, destruction is everywhere; battles explode on every ravaged continent. Amidst heavy combat, an errant shell shatters an ancient buried seal releasing a horrific mutant army from its eternal prison deep within the earth. As the mutant scourge threatens human extinction, a single squad of soldiers descends into the earth to fulfill the ages-old prophesy of the MUTANT CHRONICLES and save mankind.

Richard JensenReviewed in the United States on December 6, 2021
1.0 out of 5 stars
Unwatchable and mind-numbingly absurd
Verified purchase
Believe the bad reviews!

All-star cast doing its job, but this "story" and the "writing" will literally melt your brain (if you have a functioning one that's trying to do IT'S job and find a shred of sense anywhere here).

First, the film is basically unwatchable, because everything is filmed in this dark motif that makes it hard to impossible to see details. This becomes outright maddening within moments.

Next, this "film" cannot figure out what it even IS. It claims that it portrays events in 2707, but EVERYTHING from clothing to verbiage to even the cigarettes scream 1915. So there's this vast cognitive dissonance that becomes mind-melting in no time.

The whole "four corporations" premise doesn't even begin to fly. There's one early line where trench-mates (yes, it's WW1 trench warfare) complain that their bleeding and dying serves only to make their "righteous" corporation's stock go up. Yeah, yeah, "evil corporations" and all that, but this is NOT how it works. AT ALL. If you're gonna make a whole film that revolves around the "evil corporation" meme, you're gonna have to do a LOT better than that sort of "writing."

The "mutants" are ridiculous. Period. Not worth watching. You wanna watch impressive aliens/mutants/whatever? Watch Edge of Tomorrow. Again. This "film" is NOT it!

So, what you have here is some "artsy" filmmaking with a great cast that amounts to nothing more lofty than an "evil corporations" (oh, and the "disadvantaged" thrown in for extra measure) sermon.

The fact that this got so many four and five-star reviews does not bode well for our society. Seriously.

UlshaReviewed in the United States on December 15, 2021
2.0 out of 5 stars
Great actors, hamstrung plot, hilariously bad CGI
Verified purchase
The constant rain filter in the opening 12 minutes is all the warning anyone needs that this story is going to be a slog.

This feels like a war is hell story with a future-tense deiselpunk aesthetic and that the whole mutants and world engine were spliced in because the studio didn't want to sell a dry human interest piece and told the producer to sexy it up. The war part is good, it could stand on it's own and aside from some minor issues with the scenery even short interactions were full of character and impact. I'm interested in the social structure they created, I want to see the world they are building after the throw away exposition opening about the sealed evil. Problem is the entire main plot line is the pseudo scifi horror trash. That story could and should be separated from this much more intensely developed world that it's tracking zombie juices all over.

This doesn't exist to generate income, but so actors can retain SAG cards a few more months between semi-retirement and legit productions and the studio/producer can claim they worked with some big name actors.

As good a performance as the actors give, I was stunned that Malkovich actually gave his short role some serious gravitas and humanity, you can see the actors struggle with the little dialog and motivation as they interact on a set with little more than some pieces of furniture in green cloth coated rooms and a few extras who barely keep from looking at the camera.

By the beginning of the 2nd act when they heroes encounter a captured mutant and the priestess takes it down with a sword, fight choreography is basic but acceptable, the CGI becomes atrocious. It wasn't just showing the budget was running out, it was gone and the shot was so bad it looked like a copy paste effect from a discount CGI effects website without any basic editing for shadows or light to integrate it.

There are plenty of practical set ups and they made costumes for the mutants but they also ran out that budget real fast and desperately try to hide they only have two fully completed mutant suits, which get run ragged quickly over a film shoot.

Give it a watch it you're just looking to run something in the background while playing call of duty otherwise it's a tryhard mess.
7 people found this helpful

joeReviewed in the United States on October 21, 2018
5.0 out of 5 stars
Very fun watch
Verified purchase
This is an absolute Syfy channel Gem! I love the look of the movie. Its very dark, gritty, and almost comic bookish. Much like the movie 300 looked. The acting is pretty good and there is alot of good visuals. Very good and frantic action(sometimes cheesey and cliche) but with lots of gunfire and sword play. The cast of this movie was what kind of confused me. Everyone does pretty well in this movie. But how did they get Thomas Jane, Ron Pearlman, and John Freaking Malkovich to be in this???? Well played Syfy...Well played
14 people found this helpful

The Cat WriterReviewed in the United States on April 8, 2016
1.0 out of 5 stars
I Don't Know About Chronicles, but it's Definitely Written by Mutants
Verified purchase
If this isn't the worst movie ever made, it's in the running. And such a cast! I bet the poor luminaries suckered into this thing hide it somewhere. I bought it because it's sci-fi and because I could watch Thomas Jane flex his biceps. What I got was scenes of WWI doughboys playing trench warfare with crab-armed alien monsters, interspersed with nonsensical scenes of John Malkovich as fearless leader in an ivory tower somewhere in the world, and Ron Perlman as warrior monk in unnamed monastery atop some cold pinnacle...because we all know spirituality only happens in monasteries located on unreachable, frozen mountaintops. But this monastery wasn't so unreachable that the lumbering monk couldn't gather to him a rag tag assortment of talented misfits, deadly rejects of society that included the cynical ex-soldier and two beautiful, mysteriously gifted women. Any of this sound familiar? Even worse, this crawling cliche of a sci-fi movie is done without logic or natural progression of plot. Let's see, there's the 'bar scene', several shots of terrified citizens running for their lives and left behind to die, and a tortured alien in bondage in the monastery turret. But my favorite vignette is when Malkovich, whom I assume to be a world leader (never clearly explained), is surrounded by scythe-armed mutants who have dragged their grunting bodies around like zombies, and have overcome all obstacles (never shown) to kill him. His last words: "Do you have a name?" What? Really?

Of course, our hero Jane is the only survivor, and doesn't look too pretty when they finish with him, but he saves the day as hero do, even cynical, reluctant ones, and the aliens leave after he turns off their 'machine' that turns humans into claw-armed aliens. Don't ask how. And don't ask why. I don't remember if Jane is cured of his nihilism in the process. It doesn't matter. I just wish I could get my money back.
7 people found this helpful

BryanReviewed in the United States on December 3, 2021
1.0 out of 5 stars
Only made it 10 minutes
Verified purchase
I thought at worst this would be a nice action flick with some potentially mediocre special effects. But it starts right off with some standard, dull, and absolutely unimaginative "evil corporations have taken over the world" stuff and proceeds to a drawn-out war scene that is absolutely uninteresting by virtue of the fact that the film introduces no characters worth worrying about and throws some barely coherent action sequences at you in rapid succession. We then introduce some stock, unimaginative mutants that show up to (thankfully) eliminate most of the actors contributing to the initial mess. zzzzzzzzzz....

Tyler M.Reviewed in the United States on January 5, 2022
1.0 out of 5 stars
Horribly Unengaging
Verified purchase
I always try to look for some spark of positivity when reviewing a film or show but honestly I couldn't watch this longer than 20 minutes. The plot, writing, CGI, and acting were bad. The choreography was laughably bad. The knife fight scene in the beginning honestly looked so forced and unnatural with such delayed movements it looked like a film that was trying to parody a bad fight scene for a laugh. I skipped around the movie a bit just to realize the entire movie was filmed with a dark and dim setting. I knew continuing to watch would just hurt my brain.

DougReviewed in the United States on November 8, 2016
3.0 out of 5 stars
If you know anything about history, warfare, or weapons you will hate it. The visual representation is amazing.
Verified purchase
Forget what you know about physics, history, warfare, tactics, and weaponry. This movie is meant for the Steam-Punk crowd. The story is interesting, the visual effects are great. Big actors. Just sit back and take it in. Is the time 2700s or 1915. the dress, weapons, houses are a mishmash of a variety of times. Some of the weapons are original to the film, others, are well, I saw a grease gun in there. WW1 trench tactics? First Jesus was a corporal, no a lieutenant. One guy is introduced as a lieutenant and then a captain. Again, don't read into it and you will enjoy it. For the rest of us, all the writers needed to do is let us know how the tactics, weapons, etc went back to the early 1900s to make it a little easier to enjoy. The actors get 4, the visuals get a 7, but the story gets a 1, therefore I gave it 3 stars. Amazon, let us rate the different aspects of the art you present here.
9 people found this helpful

Jody JohnsenReviewed in the United States on January 17, 2022
1.0 out of 5 stars
Who writes this crap?
Verified purchase
I was fairly certain I was not the target audience for this movie but I was busy do I played it to keep me company. I mostly ignored it but occasionally took a quick peak. Even that was too much. Fast forwarding was better. I think the point was saving the planet, all the heroes die but one who saves the earth by jump starting their space ship so they could go home. Someone wasted an enormous amount of money putting that to celluloid.
See all reviews
Back to top
Get to Know Us
Make Money with Us
Amazon Payment Products
Let Us Help You
EnglishChoose a language for shopping. United StatesChoose a country/region for shopping.
© 1996-2022, Amazon.com, Inc. or its affiliates